Having trouble sleeping? This purr generator can help! Click on the screenshot below, and be sure to adjust all the buttons to MAXIMUM for the most vibration. You can also adjust different components, including bass, mids, and treble, and time it so it goes off when you’re asleep. 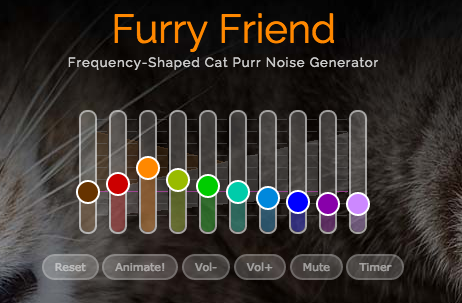 You might try testing it on your own cat, and note that there are many other noises you can use for sleeping or what they now call “self care.”

This map, showing of how Europeans say “cat” (from Maps on the Web), also teaches you some etymology. My theory, which is mine, is that the word “kitty” comes from the Turkish “kedi”. 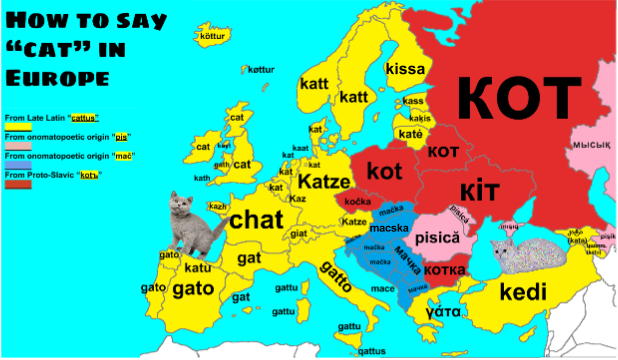 Finally, reader Lauren sent me a cat song with a nice note:

Last night I found this video on YouTube. I would say that this was a record I had as a child, except that I still have it. It was one of my favorite songs back then, and one I used to sing to my back-then cat Smaug as I drove him to and from vet appointments.

I have to say that it’s very catchy. It also reminds me of one of my own childhood favorites, “Teddy Bears’ Picnic“—but with felids. (I can still sing the entire song—the Rosemary Clooney version—from memory.) I’ll add the 1932 version of the teddy bear song by Henry Hall and His Orchestra, which, according to Wikipedia, played a big role for the BBC.

The 1932 Henry Hall recording was of especially good quality with a large tonal range. It was used for more than 30 years by BBC audio engineers (up until the early 1960s) to test and calibrate the frequency response of audio equipment.