Today’s Jesus ‘n’ Mo clearly reveals that Mo is a Sunni Muslim. Remember that one of the main distinctions between Sunnis and Shiites is that the former accepted Muhammad’s father-in-law as the rightful head of the faith after the Prophet’s death, while the latter took Ali, Muhammad’s cousin and son-in-law as the Caliph. On such differences rests the bloodshed and enmity that continues to plague the Middle East. ISIS, you may recall, is Sunni. 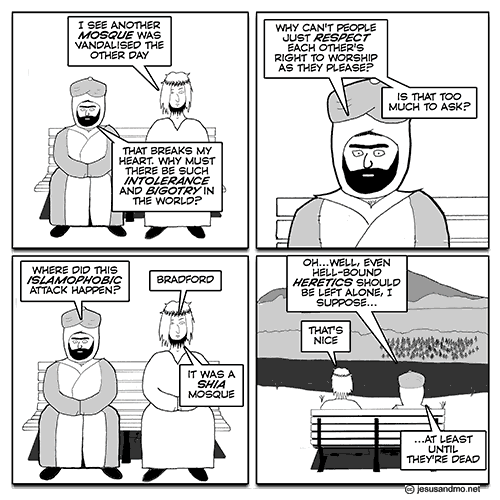 You can read about the vandalized mosque here: someone spray-painted “Shia Kafir” (“Shia unbeliever”) on the wall. It’s inexcusable, and no suspects have been apprehended, though the words suggest a Sunni might have been involved.