We’re back to the Galápagos today. Reader Robert Lang, who is overly modest, sent a bunch of photos a while back, adding some notes (indented):

I am a longtime reader of your website and have enjoyed and admired the readers’ photos, while considering that photos of such quality are generally beyond my equipment/skills/access. But I recently was privileged to visit the Galápagos islands where the animals exhibit such lack of fear of humans—really, lack of care, they seem to think of us as just objects—that one can get close enough to take pretty decent pictures even with ordinary skills and cameraware. It was an amazing experience, and I’d welcome the chance to share some of the photos with your readers, if you feel so inclined.

I do feel so inclined, and here they are:

The Sally Lightfoot crabs (Grapsus grapsus) are everywhere along the coast. The babies are black and well-camoflaged against the black volcanic rock, but the adults stand out brilliantly. 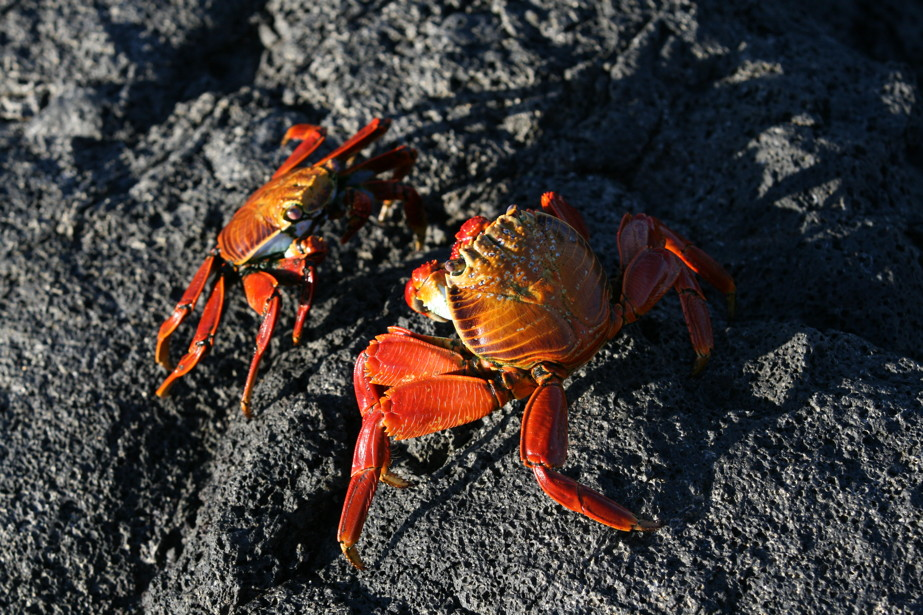 The true stars of the coastline are, of course, the marine iguanas (Amblyrhynchus cristatus), who lie around in heaps, warming themselves before their next foraging swim. 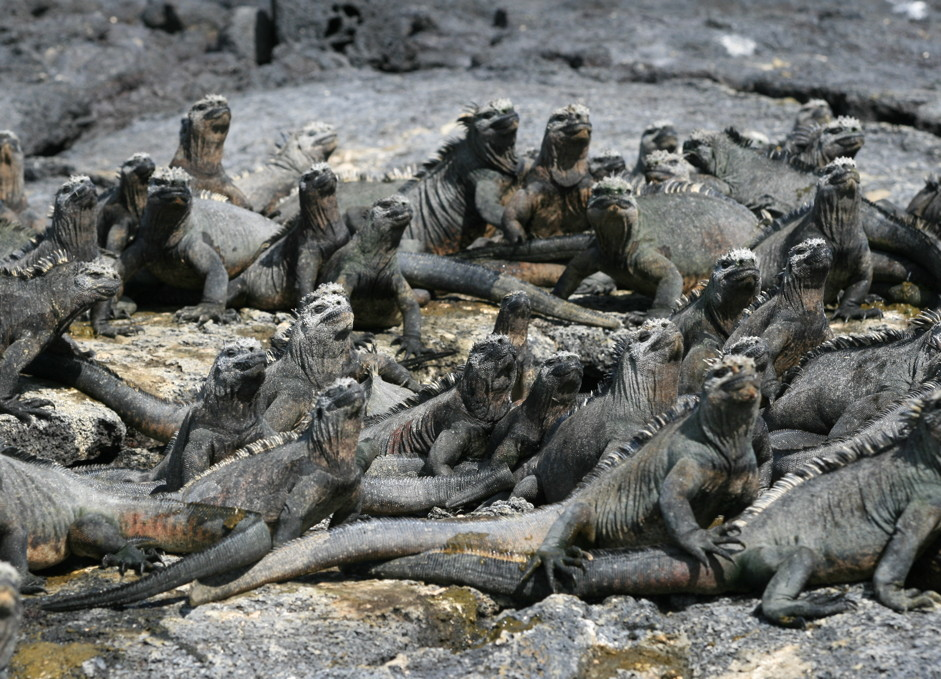 Lava lizards (Microlophus albemariensis) are popular headgear among the fashionistas of marine iguanas. 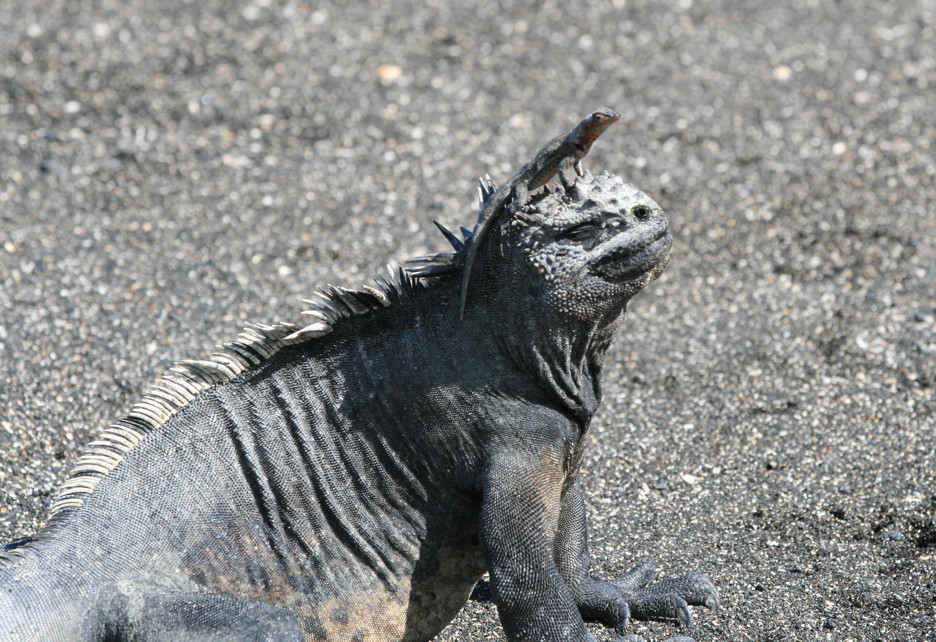 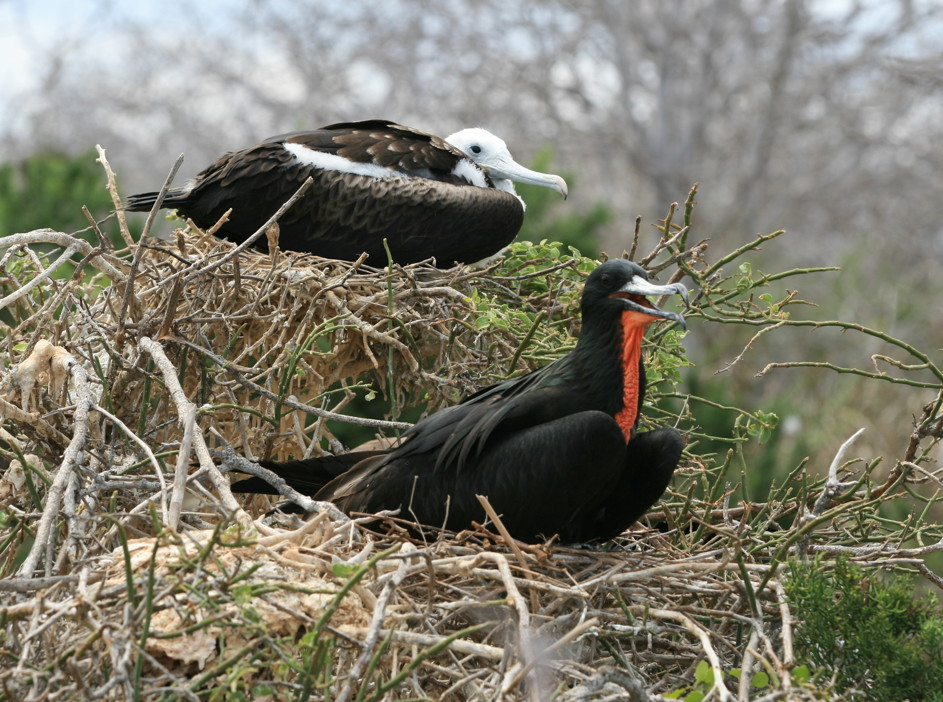 When he puffs it out, it’s quite noticeable. 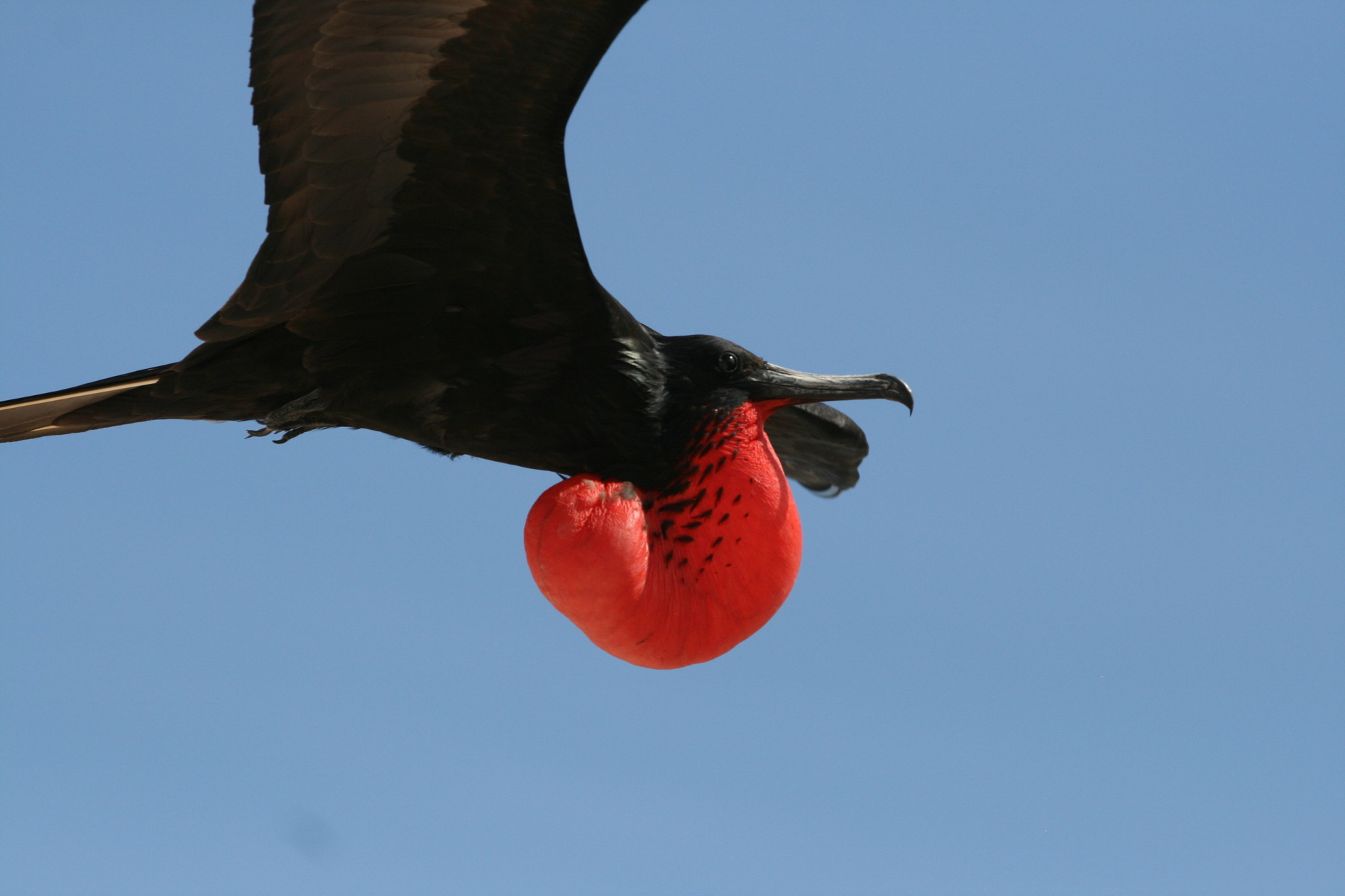 There are two species of frigate: the Great (Fregata minor) and the Magnificent. (I wonder if there’s also a Pretty Good Frigate, from Minnesota.) The Great Frigate has brilliant green iridescent feathers on its back. 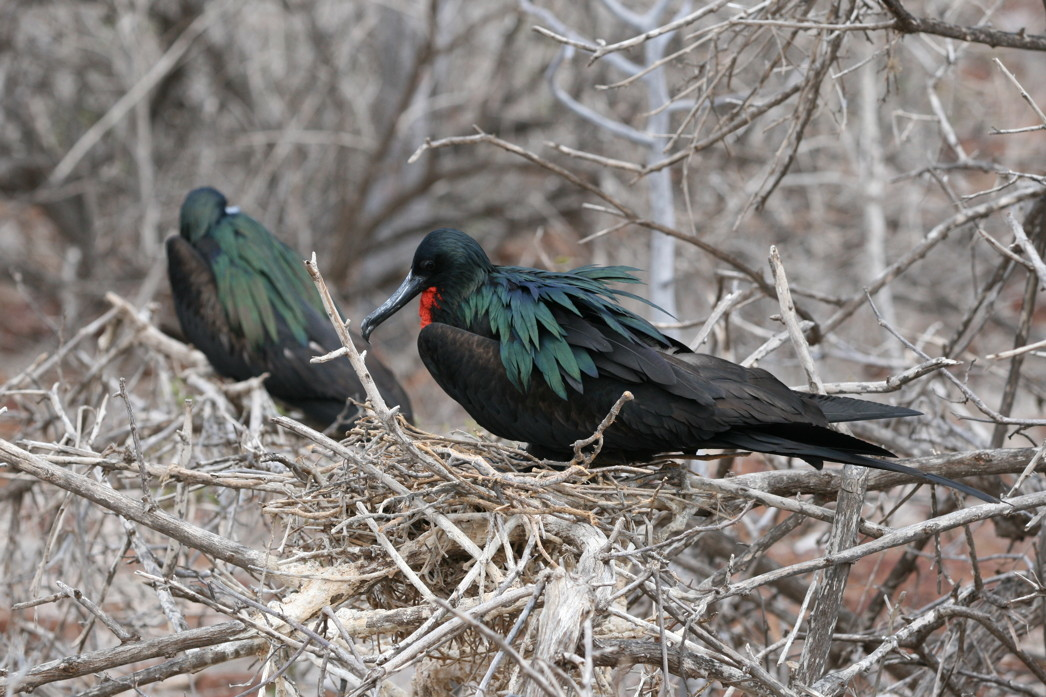 Their chicks, like those of so many seabirds, are fluffy and white. But they still have that vicious hooked bill! 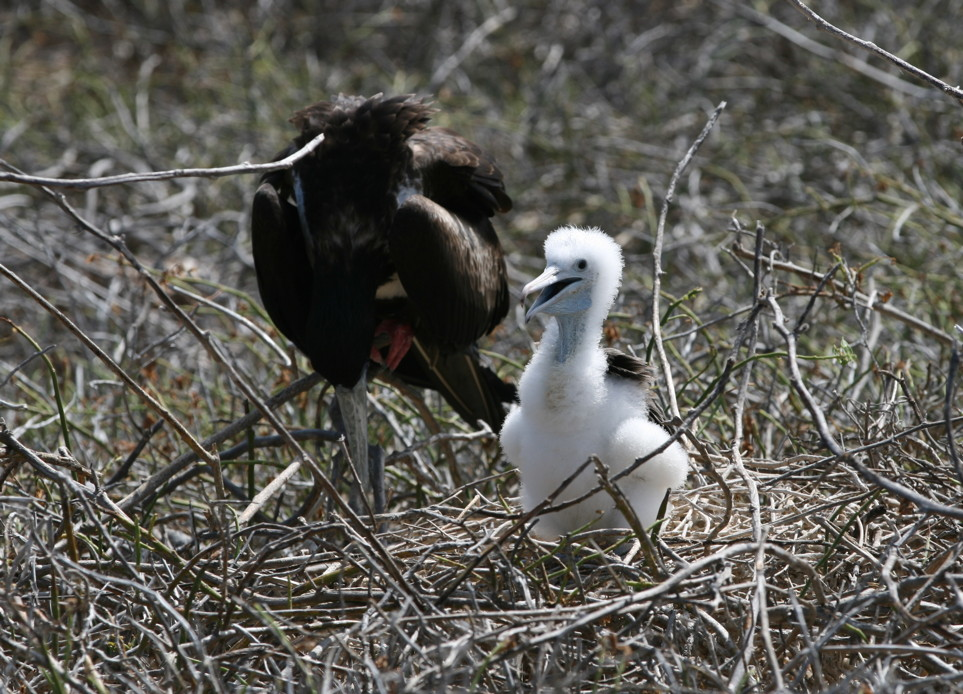 We saw quite a few Galapagos hawks (Buteo galapagoensis), which are said to be most closely related to the Swainson’s hawk. Here it serves as both top predator and scavenger. 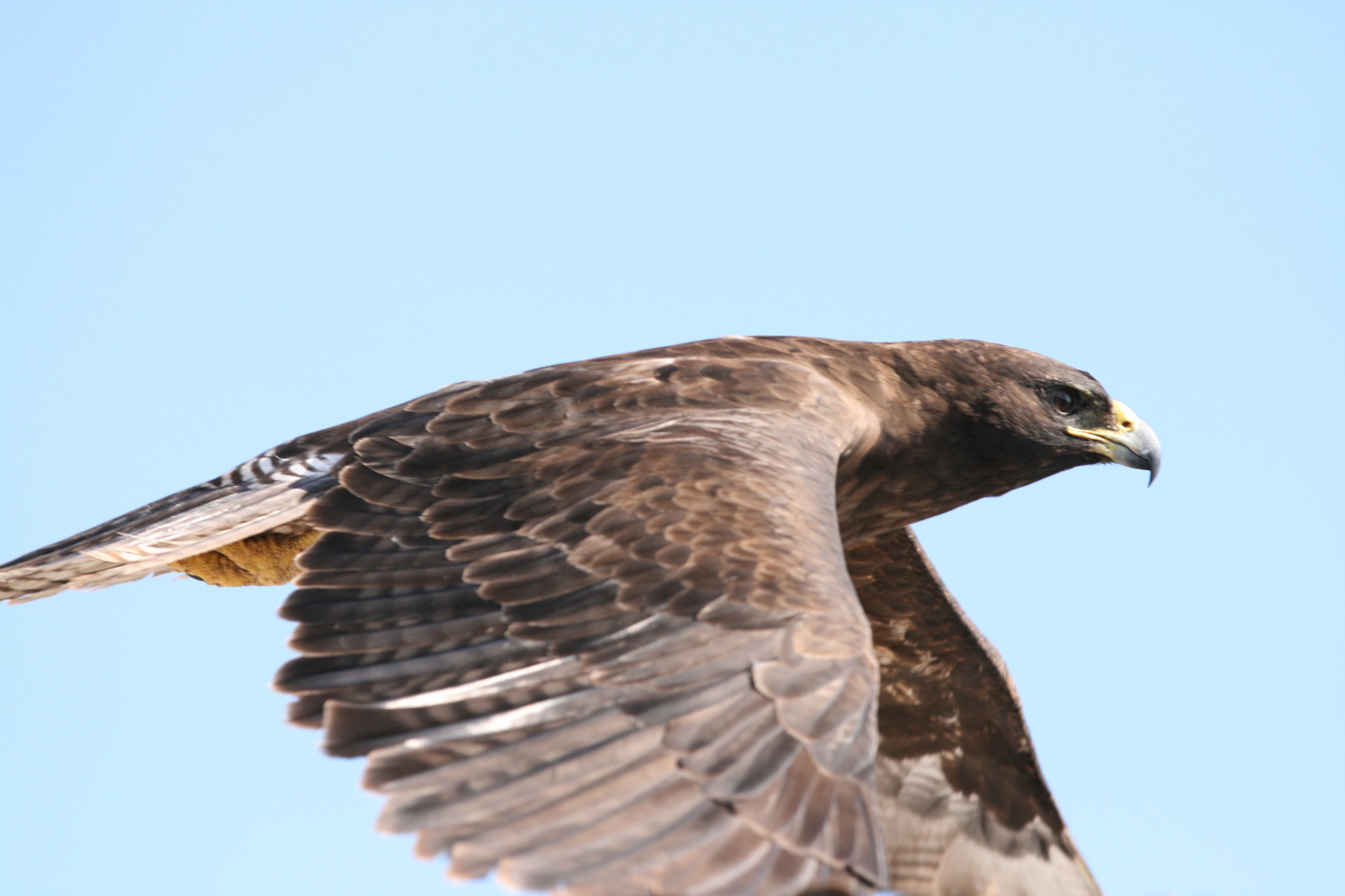 This one was picking over the remains a marine iguana. They prey particularly on female iguanas that are exhausted after digging a burrow, laying their eggs, and covering them up. 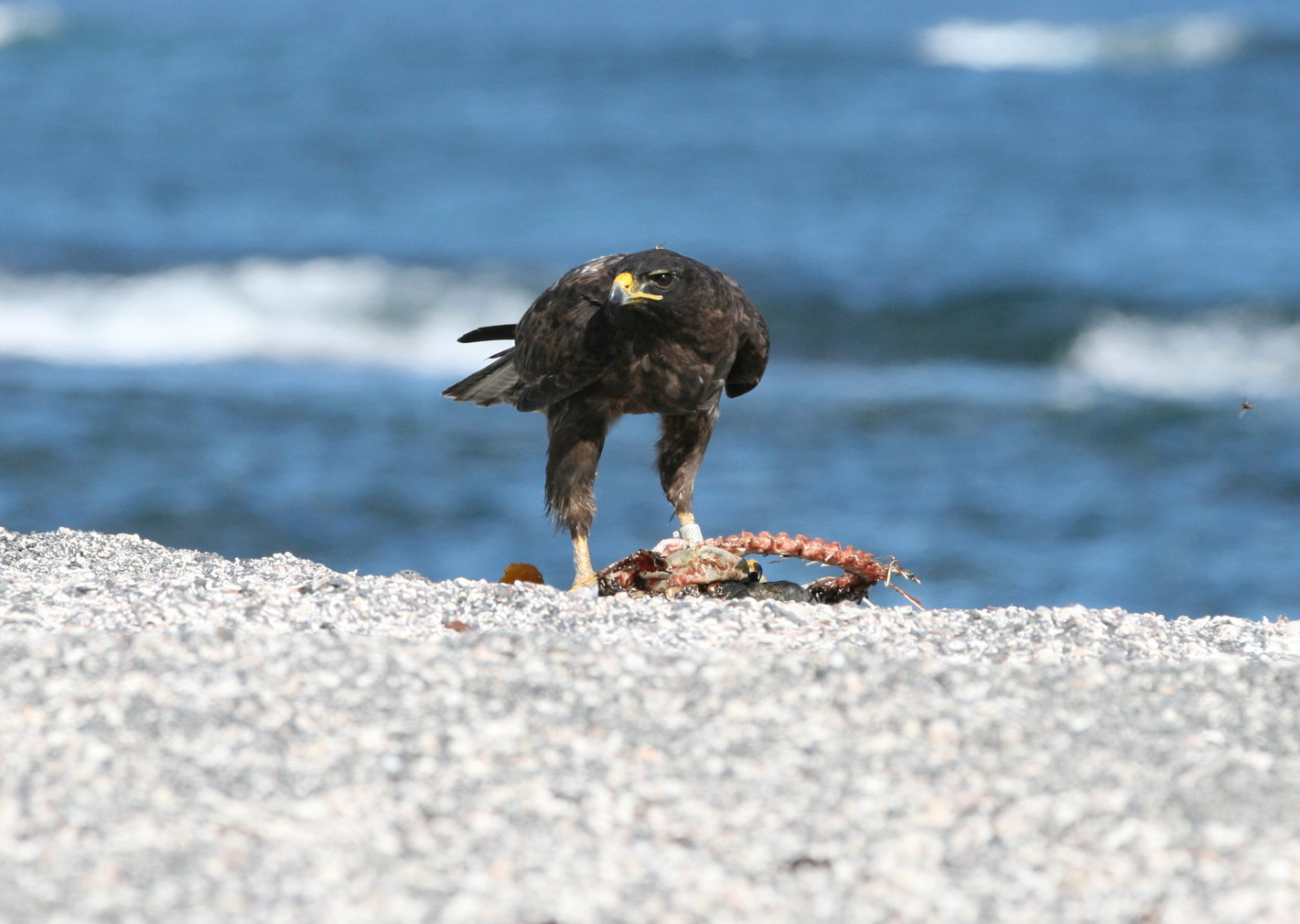 There are three types of boobies: the Nazca (Sula granti), blue-foot (Sula nebouxii), and red-foot (Sula sula). The blue-footed boobies were quite common along the coast. 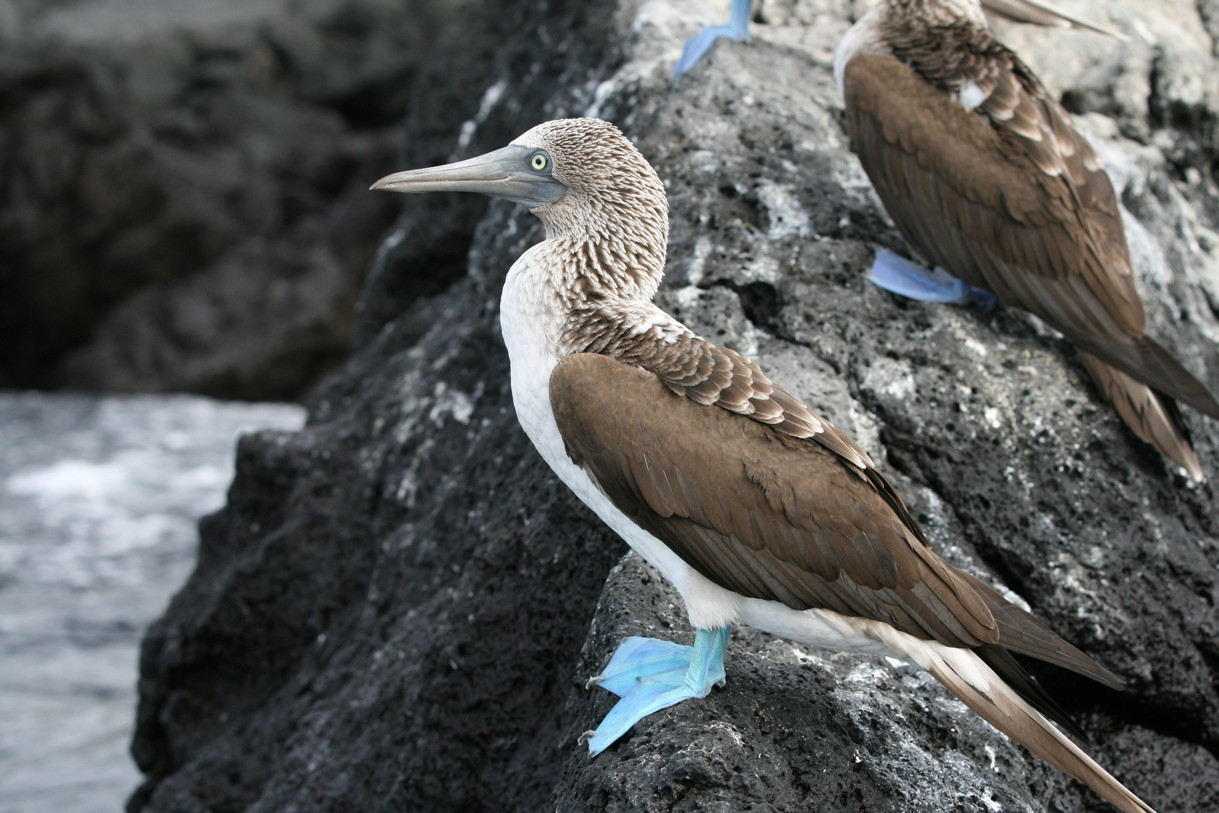 The red-footed boobies nested in trees a bit inland but still within sight of the coast. 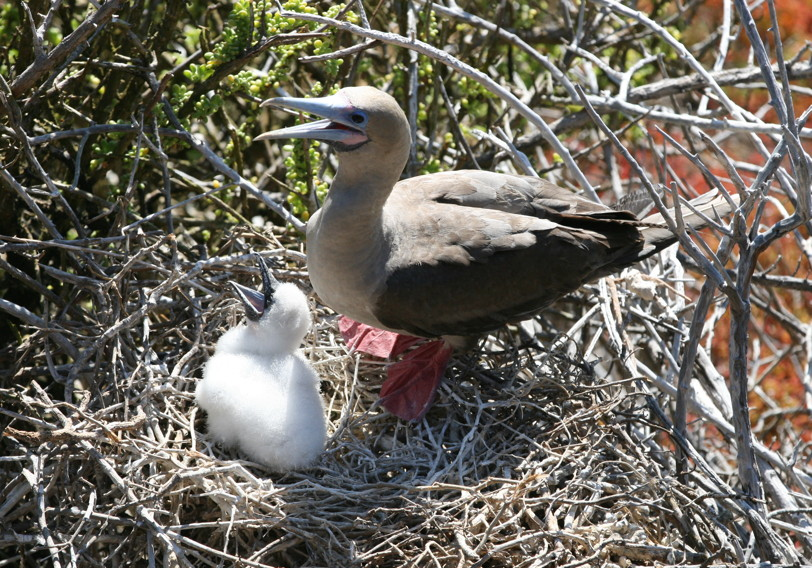 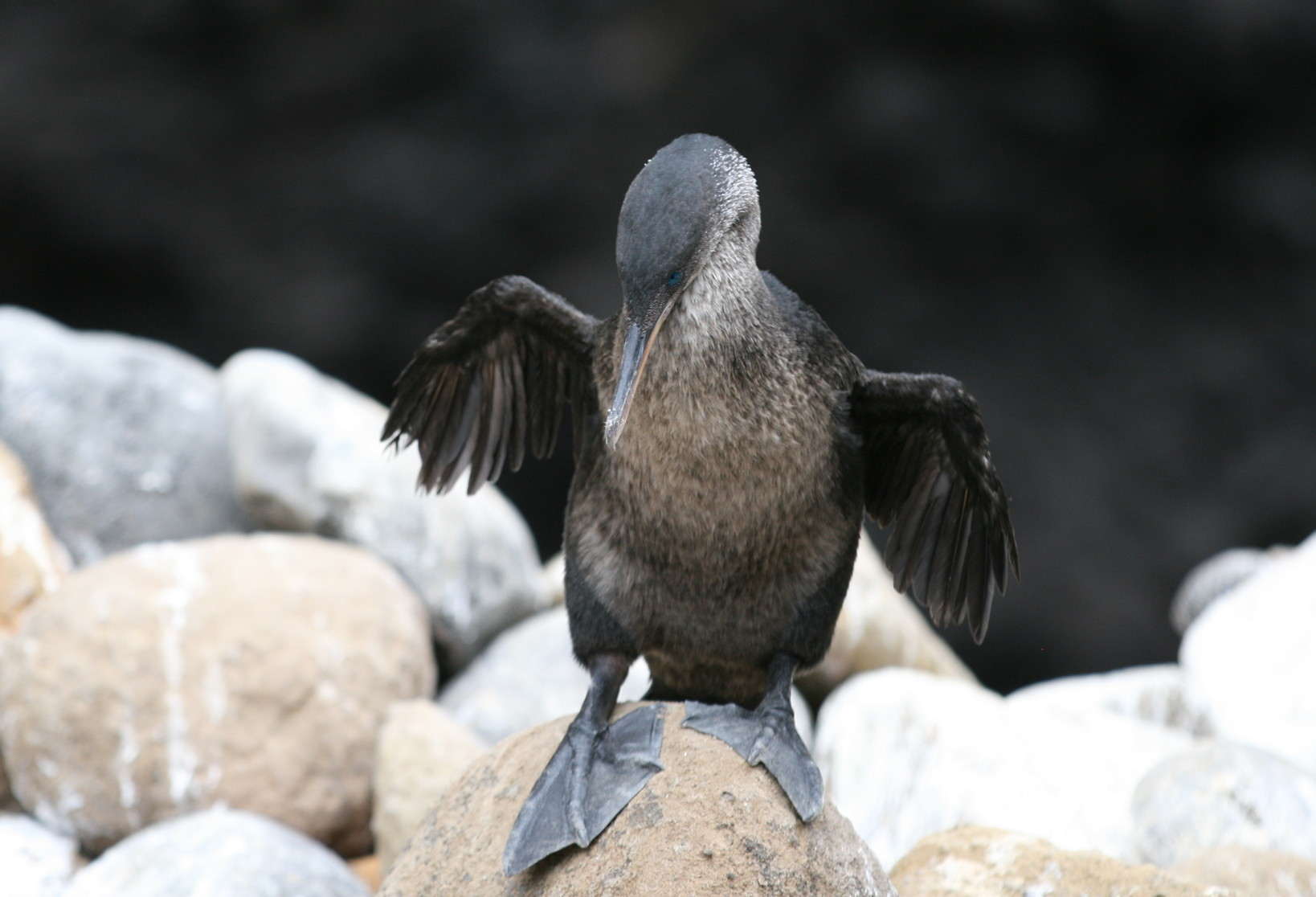 They are matched in underwater prowess by the Galápagos penguins (Spheniscus mendiculus). It’s weird to see penguins and not be freezing. (In fact, it was sweltering.) 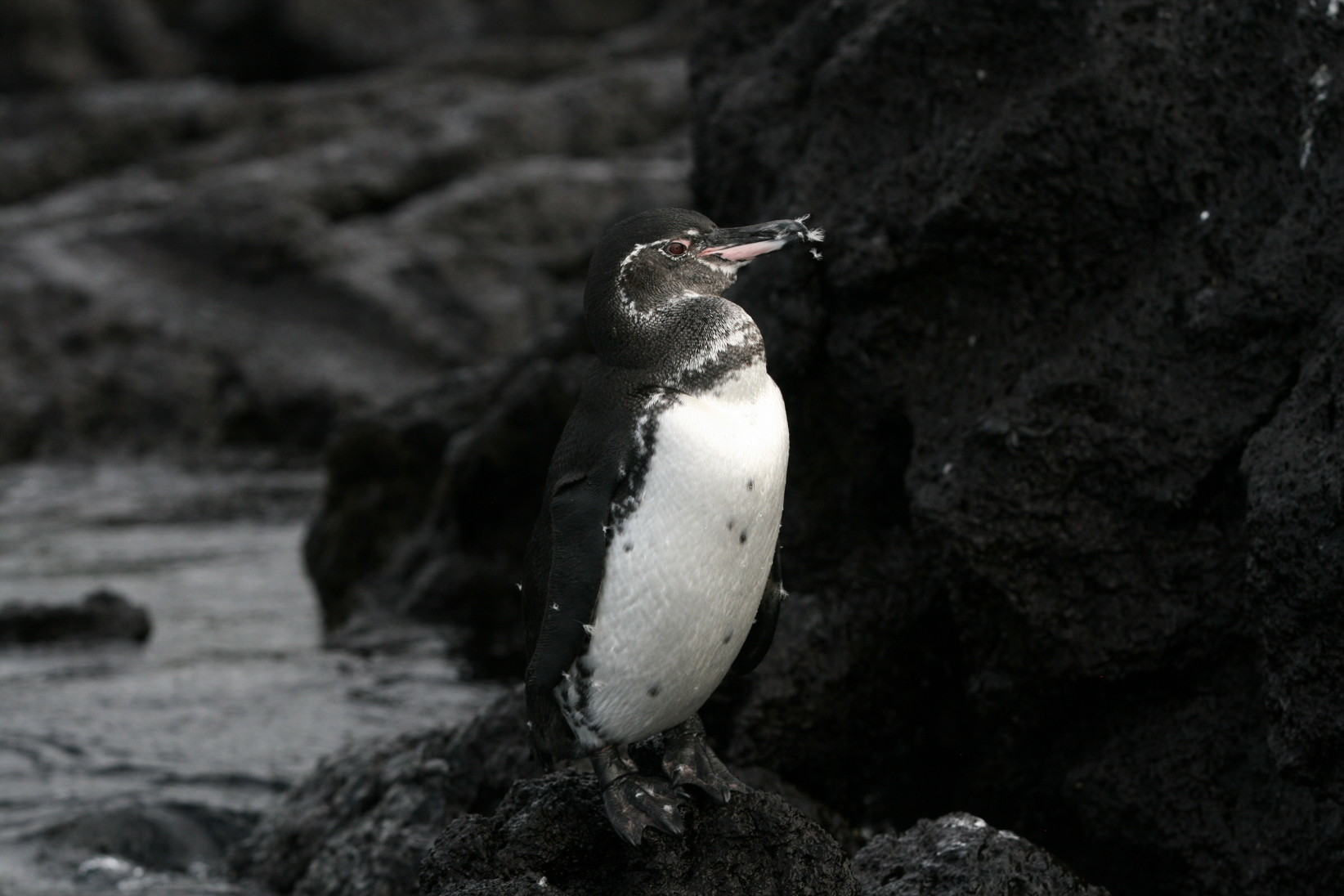 I had to take a picture of this one because I leave no tern on stone. 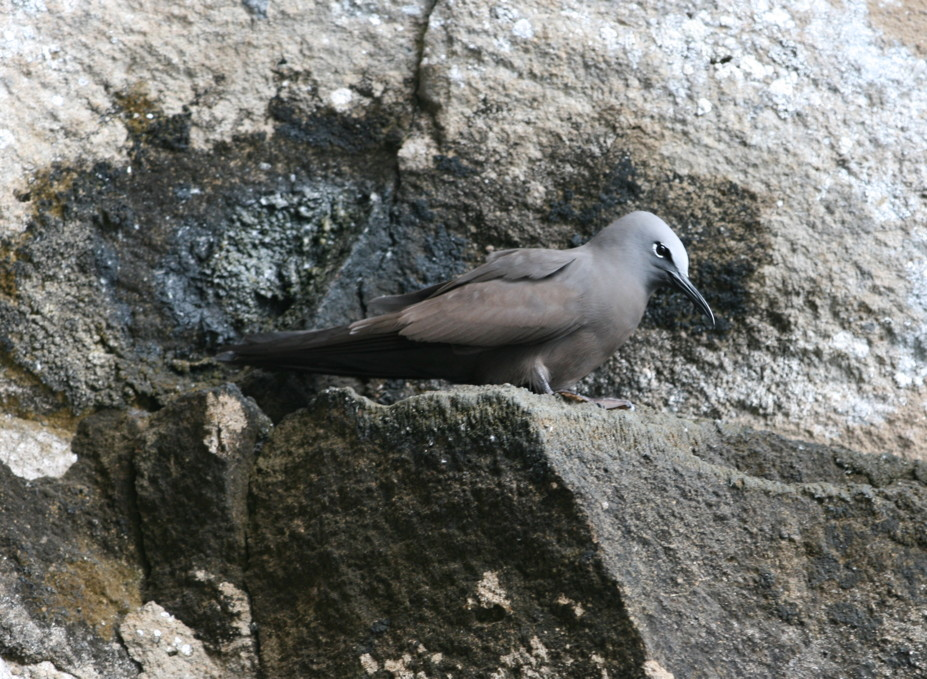 Also a great blue heron (Ardea herodias) along the coast. 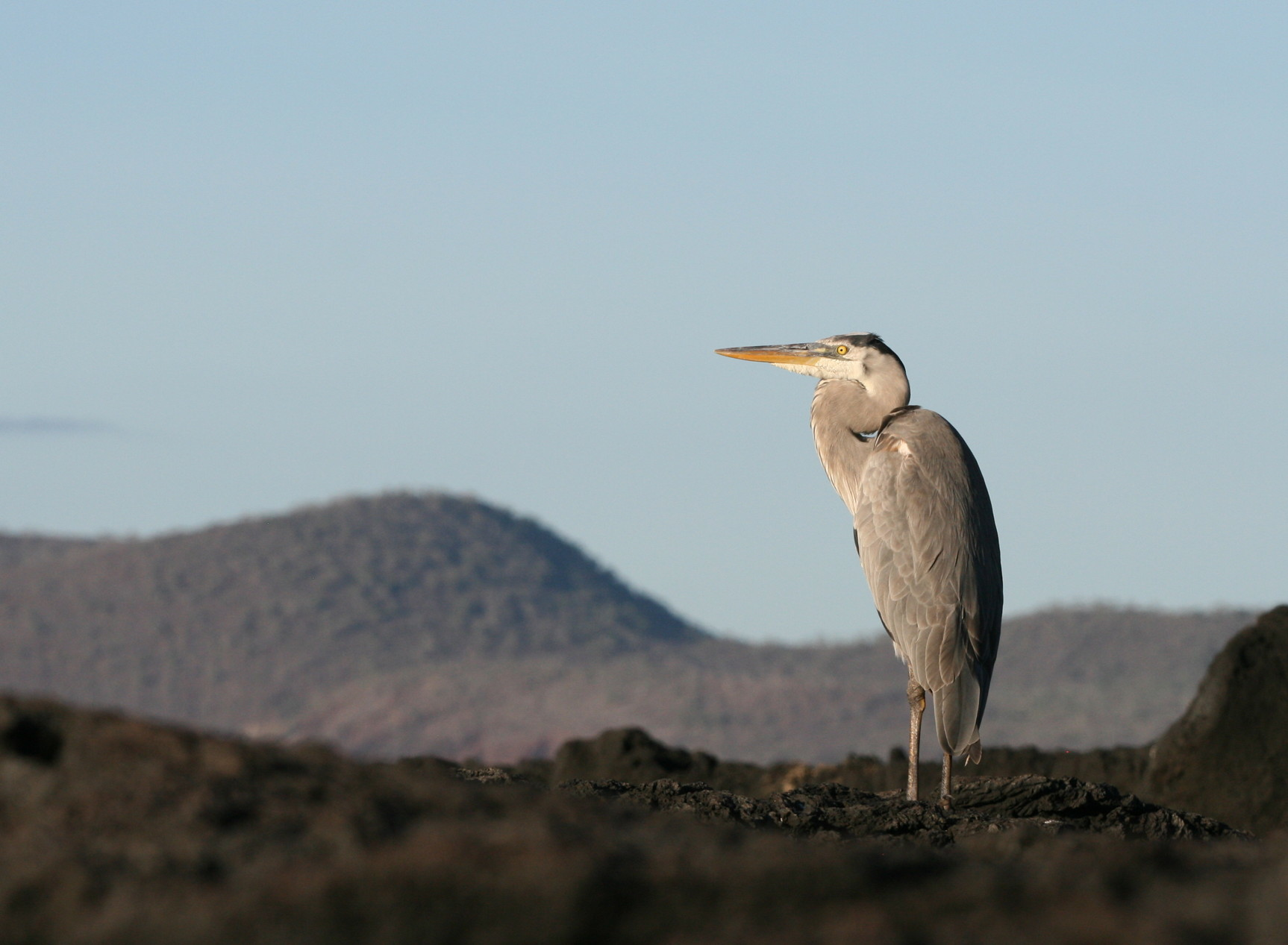 Inland we saw one of the mockingbird species (Mimus parvulus) that figured heavily into Darwin’s thinking. 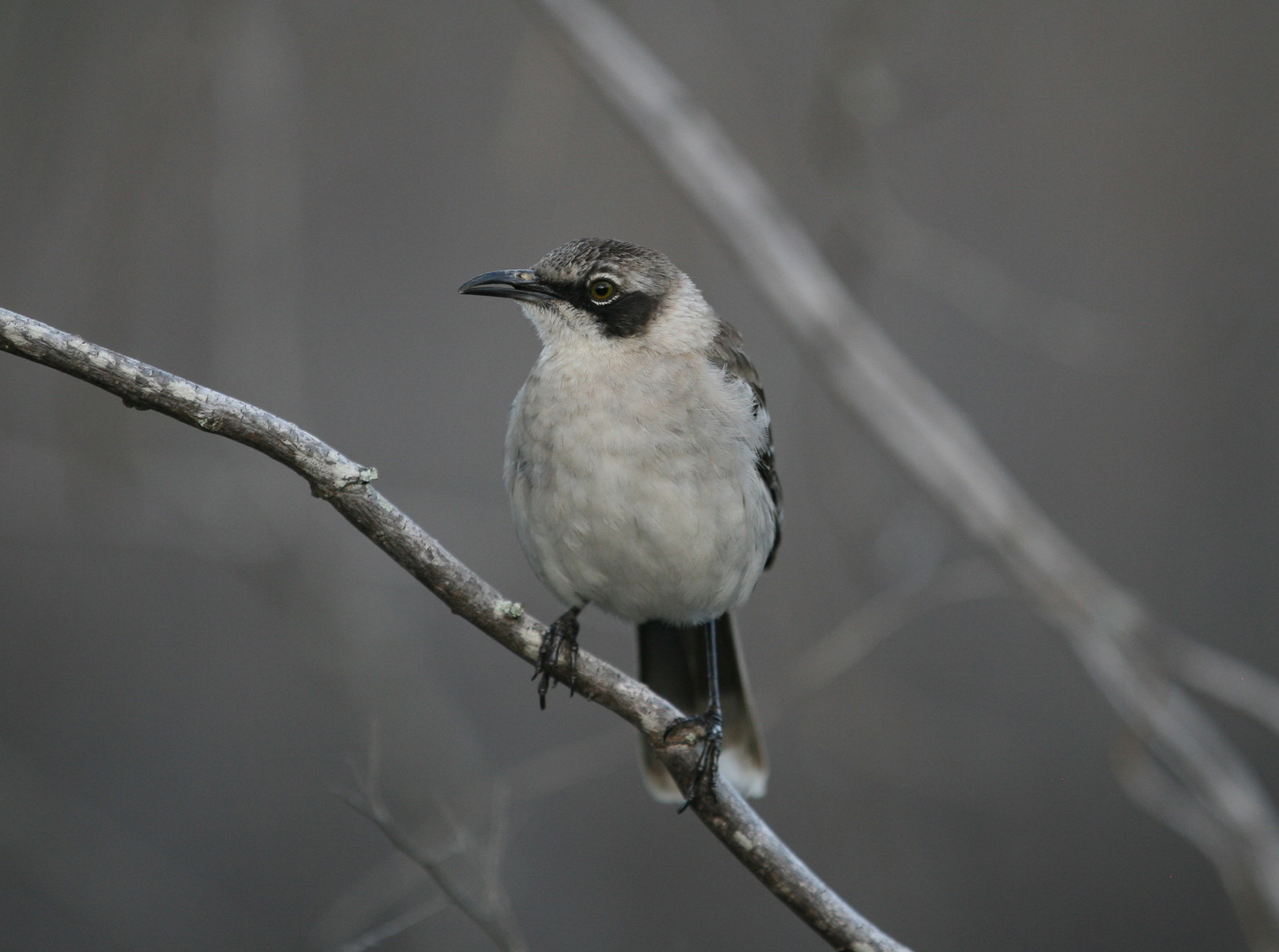 Though not nearly as common as the marine iguanas, we saw a fair number of land iguanas (Conolophus subcristatus), which are larger and more brightly colored than their marine kin. 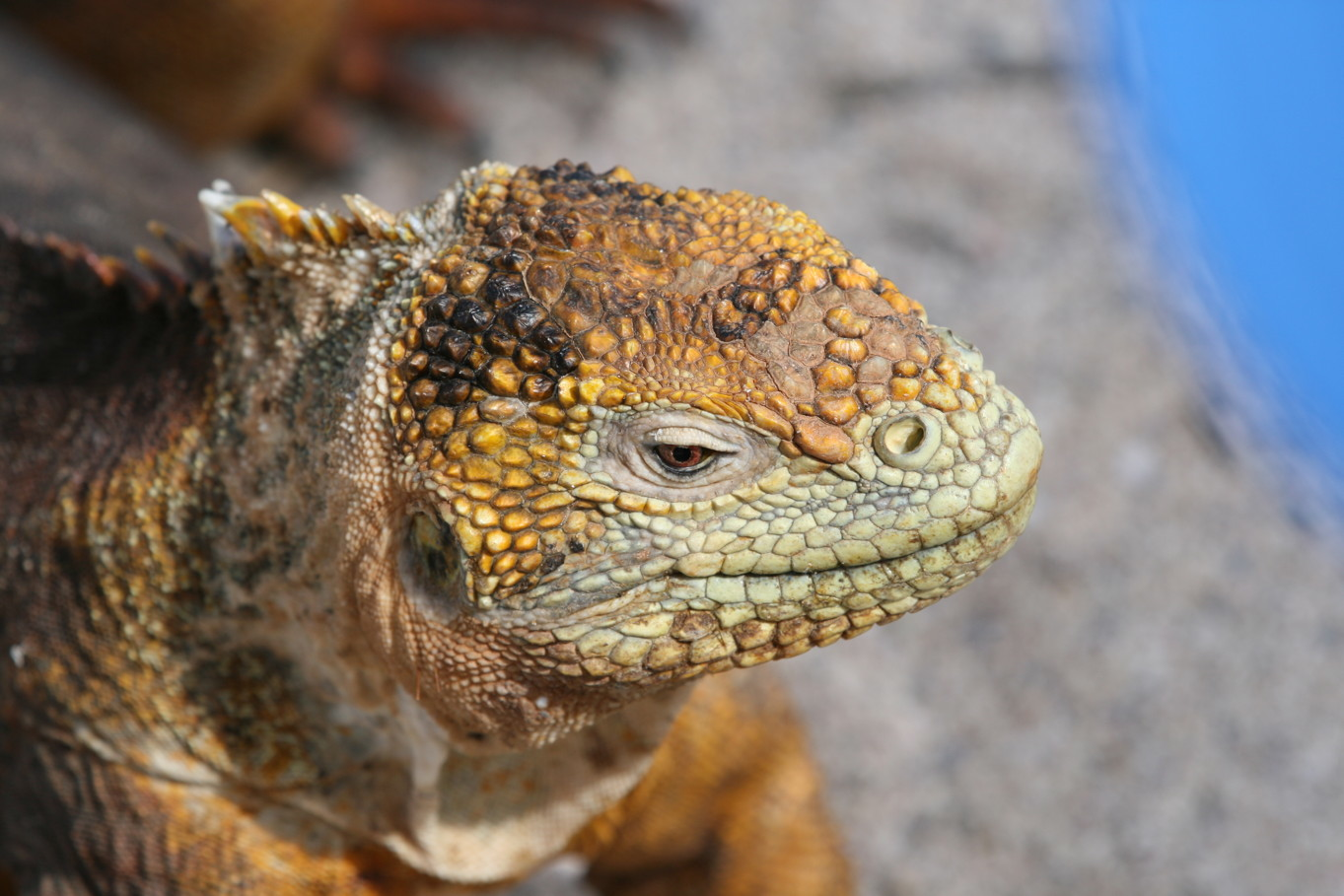 Not to shortchange the invertebrates, but there’s not that many as one might expect in a tropical climate. One of the more noticeable ones is the Galapagos carpenter bee (Xylocopa darwinii), which is sexually dimorphic. The females are black: 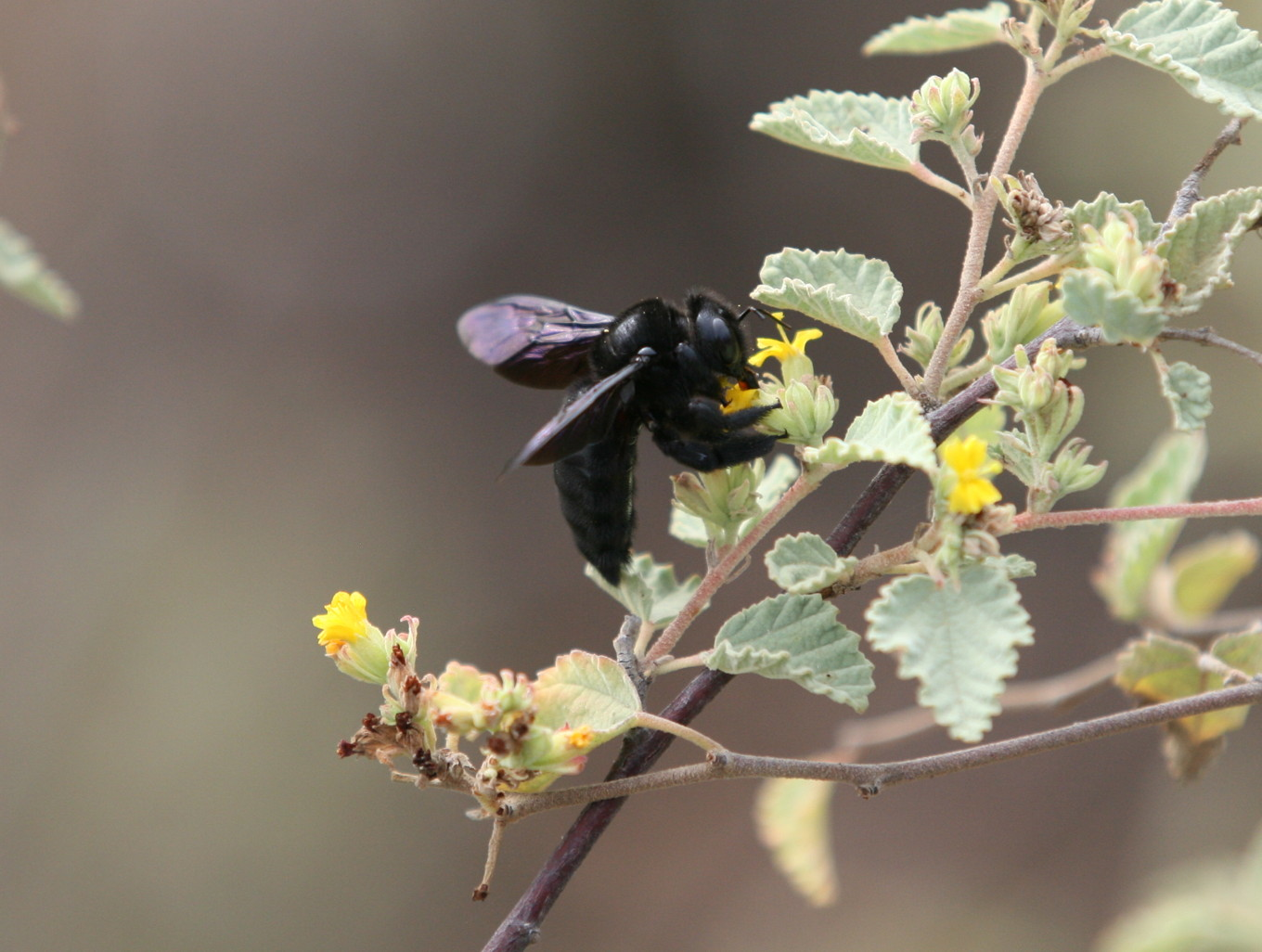 The males are a beautiful golden color. 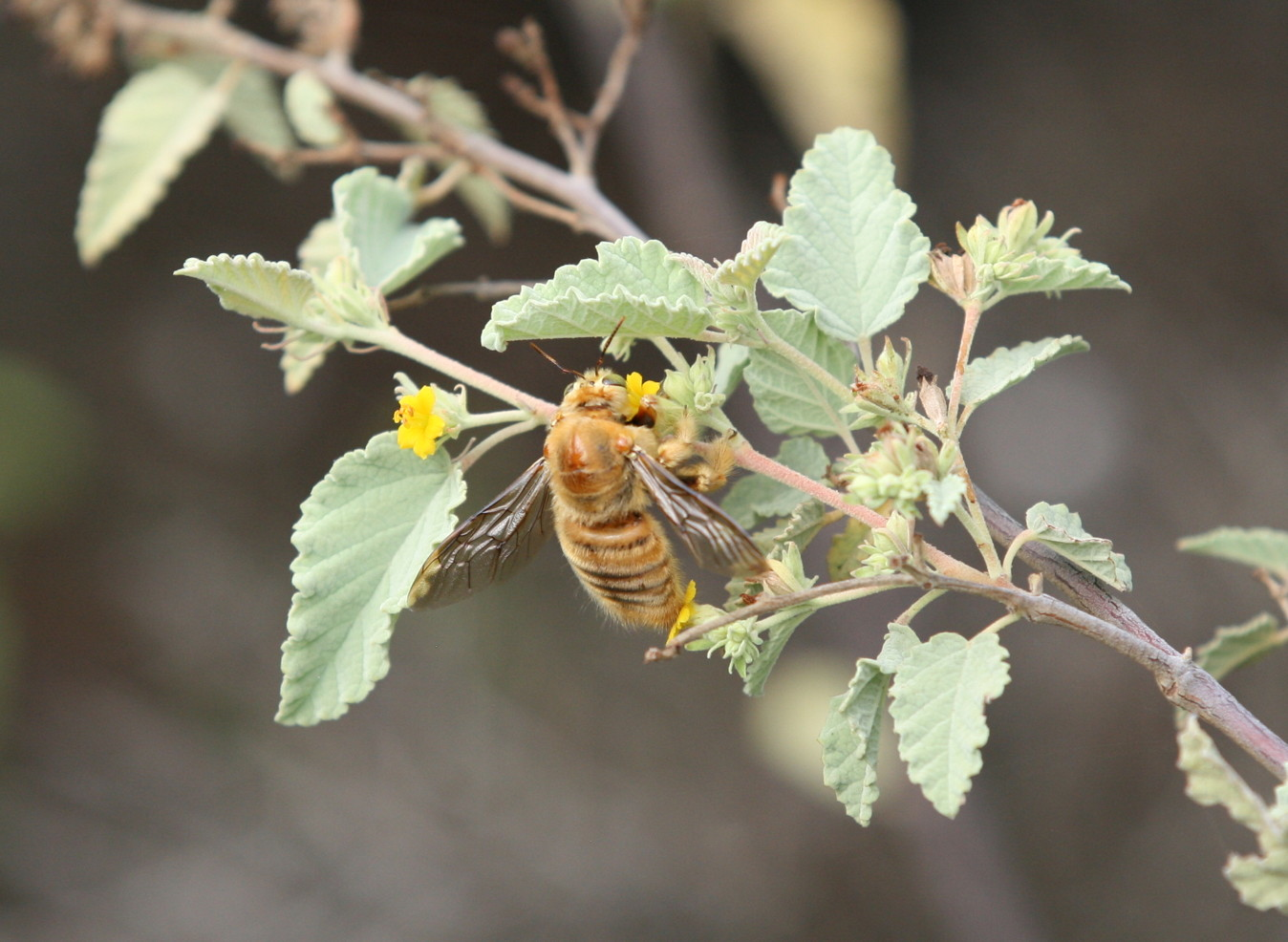 And last, but surely not least, the main event: tortoises (Chelonoidis nigra) ! Those that live in the highlands live the life of Riley, surrounded by lush vegetation. They eat all vegetation within reach of their long neck, then move a few inches and repeat the process, all day long. 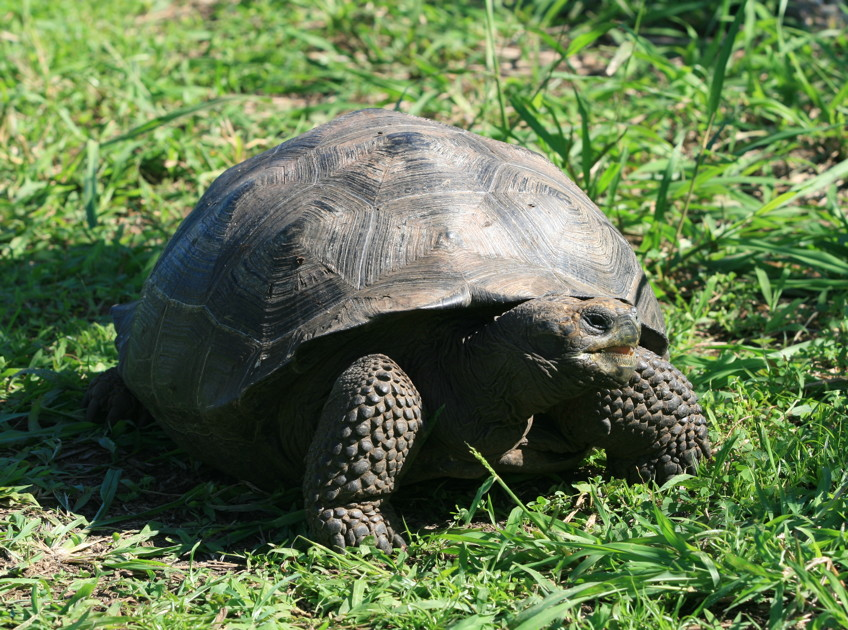 But those that live down near the coast in blasted scrub have slimmer pickings, and accordingly, they are a bit more adventurous, culinarily speaking. This one, alas, was sadly disappointed after his first taste. 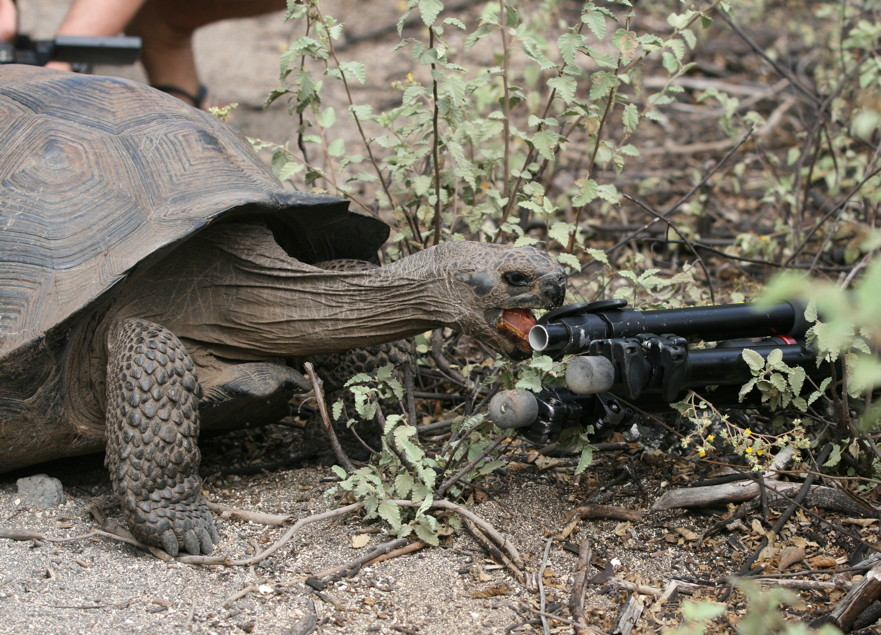