As reader Lenny wrote when he emailed me this link to an Economist article, “Trigger-unhapy: student safety has become a real threat to free speech on campus”, a piece about the spread of calls for “trigger warnings” and “safe spaces” at U.S. colleges:

I don’t think there is anything particularly insightful.  Relevant only because the issue has made it to the general business community through The Economist.​

I suppose Lenny’s right, but the article also contains some other chilling cases of censorship of which I wasn’t aware. Here’s one:

FOR an hour or two on a foggy morning last December, some students at the University of Iowa (UI) mistook one of their professors, Serhat Tanyolacar, for a fan of the Ku Klux Klan. Mr Tanyolacar had placed a canvas effigy based on Klan robes, screen-printed with news cuttings about racial violence, on the Pentacrest, the university’s historic heart. The effigy had a camera in its hood to record public reactions.

The reaction among some black students was to fear for their safety, and that is not surprising. What is more of a puzzle—for anyone outside American academia, at least—is that students and UI bosses continued denouncing Mr Tanyolacar for threatening campus safety even after the misunderstanding was cleared up. In vain did the Turkish-born academic explain that he is a “social-political artist”, using Klan imagery to provoke debate about racism. Under pressure from angry students, university chiefs issued two separate apologies. The first expressed regret that students had been exposed to a “deeply offensive” artwork, adding that there is no room for “divisive” speech at UI. The second apologised for taking too long to remove a display which had “terrorised” black students and locals, thereby failing to ensure that all students, faculty, staff and visitors felt “respected and safe”. An unhappy Mr Tanyolacar feels abandoned by the university. He left Iowa earlier this month, when his visiting fellowship came to an end, and has suspended his teaching career. 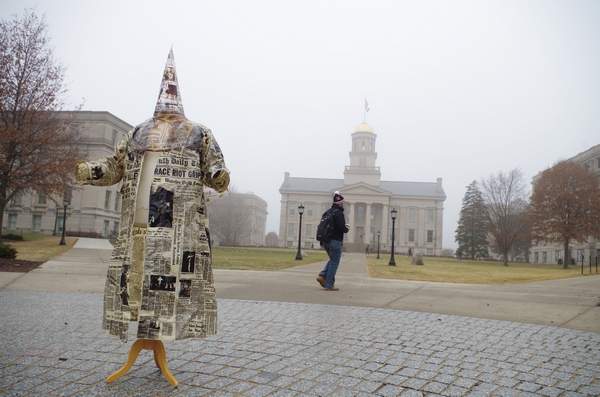 The article adds this:

. . . Mr Tanyolacar’s troubles point to something new and alarming. A generation ago campus rows turned on what should be taught. Leftish students decried lessons about dead white men as acts of racist and sexist oppression. UI witnessed its own censorship battle, after a conservative student complained about gay sex scenes in a German film shown in class. But what Mr Tanyolacar was saying was not the problem: his work is explicitly anti-racist. His problem turned on who now has the authority to declare his art harmful, regardless of his intent.

And right there you have the problem: if we are to censor “hate speech,” who is the arbiter of what constitutes hate?

The only problem with this artwork is that it was erected without permission. But seriously, look at it! It’s the epitome of what should inspire dialogue, along the lines of Andres Serrano’s famous “Piss Christ” (a crucifix immersed in a beaker of the artist’s urine). Now I accept that black students might have felt uneasy at seeing that, but look at the headlines about racial violence that bedeck the figure. It’s pretty clear that this is not a racist image. What bothers me most about this is the college’s subsequent insistence that it has no truck with “divisive speech.” What speech that has promoted social progress, or political or religious discussion, isn’t divisive? Is all speech at the University of Iowa to be harmonious, loving, and accommodating—designed to make students feel “safe”?

These repeated calls for assurance of “safety” irritate me. It’s as if students want to walk through college swaddled in cotton and surrounded by armed guards who will ensure that their tender feelings remain unbruised. Where did this come from? “Safety” should refer to physical safety, not lack of offense, and “respect” should be afforded to people, not their ideas. Let us hope that this tide of snowflakery will melt soon—but I’m not holding my breath.