Last night, Larry Moran, biochemist at the University of Toronto and author of the biology/atheism website Sandwalk, was kind enough to take me, his son (who lives in Vancouver), and one of his old friends to dinner at Vij’s, which may well be Canada’s most famous Indian restaurant. It is immensely popular, and deservedly so, as the food, which is high-class Indian—with recipes devised largely by Vij, his wife, and the cooks—is superb.

They don’t take reservations, so people line up about half an hour before the restaurant opens (5:30 p.m.), and once it’s full the next group simply waits outside. We were fortunate enough to get there right before the restaurant opened, which usually means waiting an hour or more, but we managed to get in right away and secured the best table in the house, next to the window.

Here it is from the outside, with people waiting to get in. 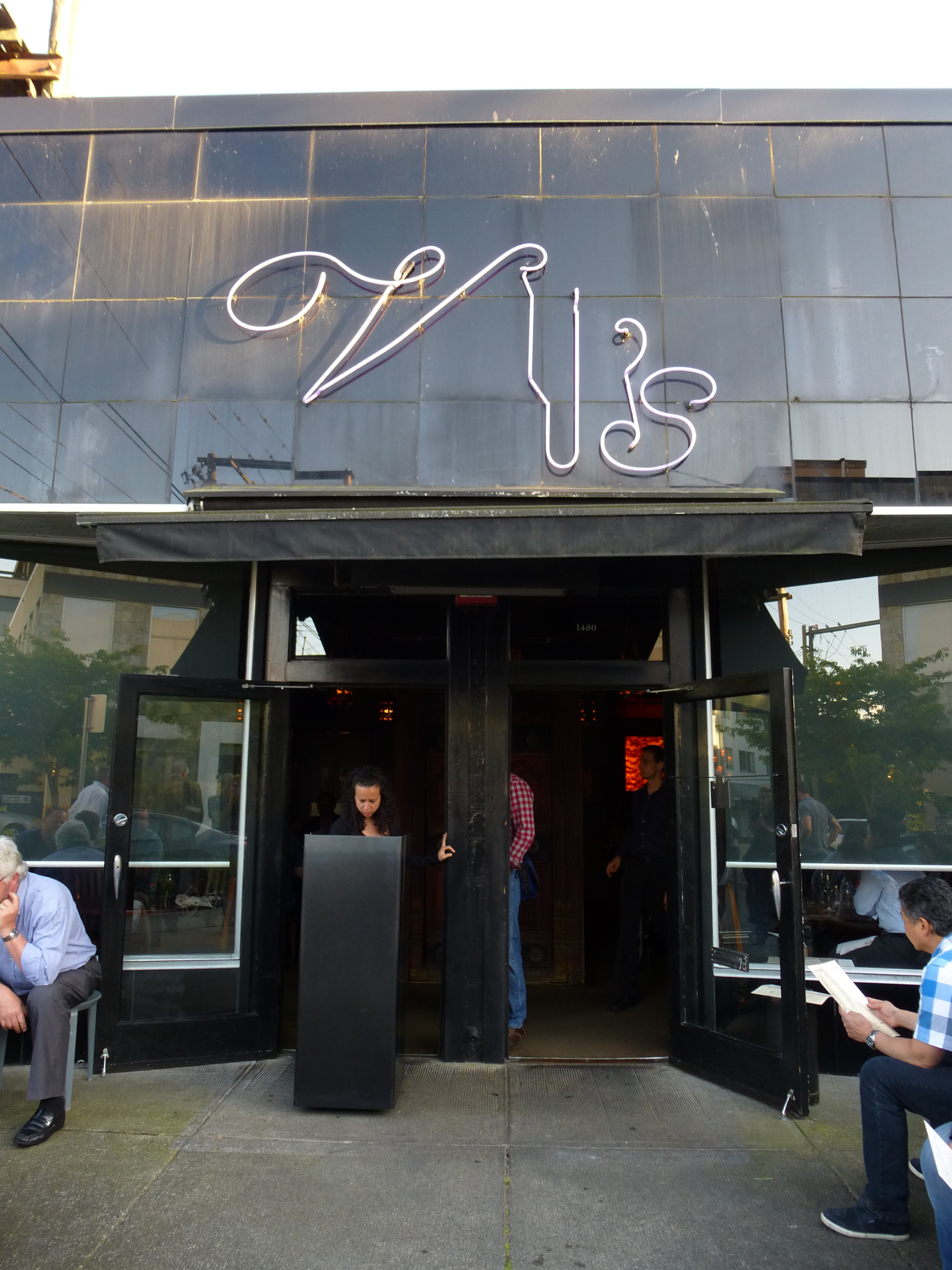 As you see below, Vij’s is a small, cozy and unpretentious place. After you’re seated, the waitstaff brings around gratis appetizers on trays. During the meal, hot naan and rice are provided ad lib, so one never runs out of bread. This is important to me, as I eat Indian food the way northern Indians do: without utensils and using pieces of bread to grasp and enfold the noms, as well as to sop up the luscious, savory sauce. The interior, full of happy diners: 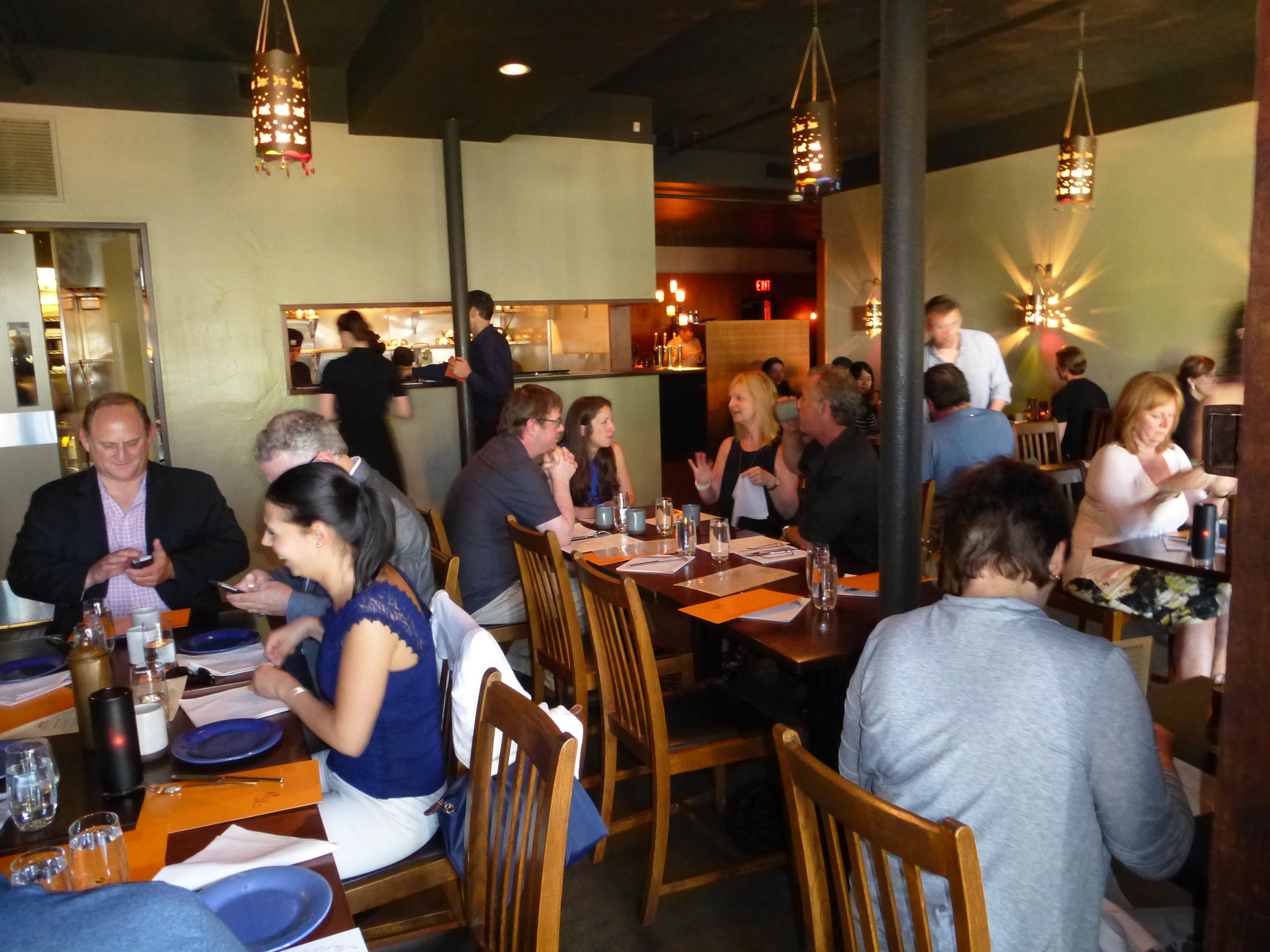 We started off with glasses of a local IPA. Beer is the best accompaniment to Indian food, though if you must have wine I prefer an off-dry, fruity white like a Gewürztraminer or Riesling. I was struck by how the late sun slanting through the windows turned the beer into a kind of liquid gold: 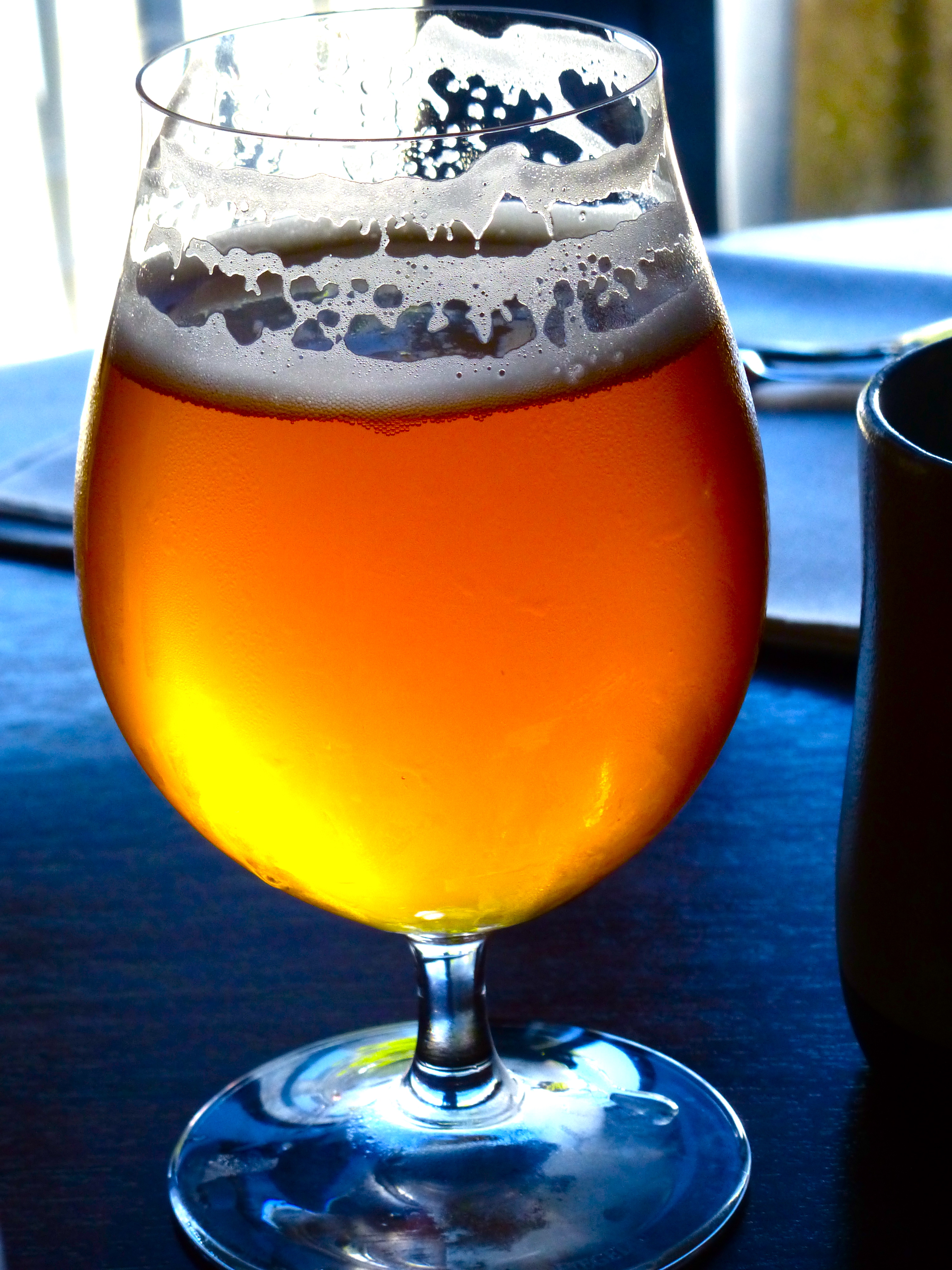 Here’s Larry with one of the appetizers (menu here), eggplant in thick yogurt and garlic curry, served with deep-fried onions on top. You can see the gratis plates of naan which are brought frequently: 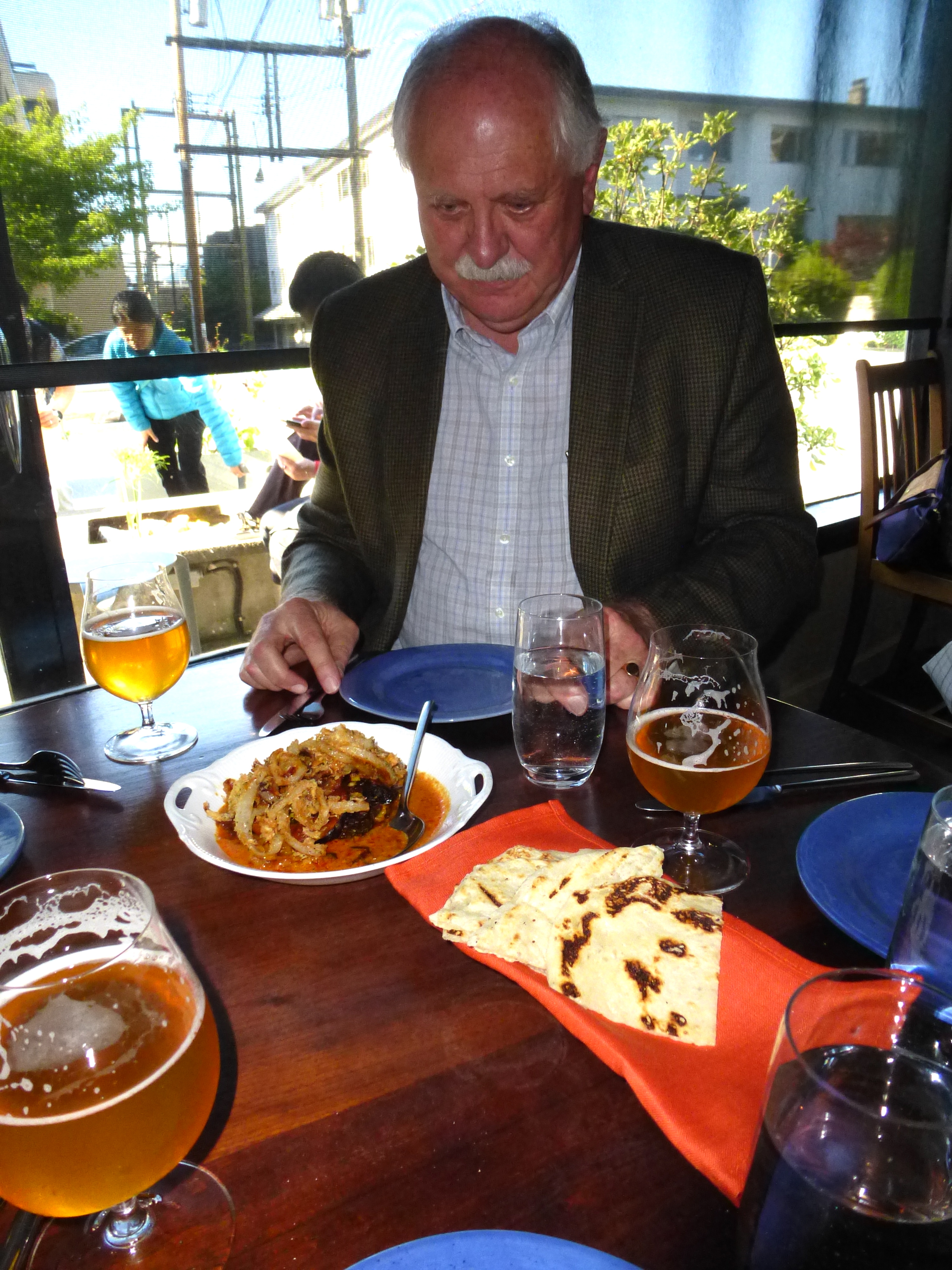 The appetizer of the day, not listed on the menu: shrimp nestled in grilled red pepper with a spicy sauce. Superb: 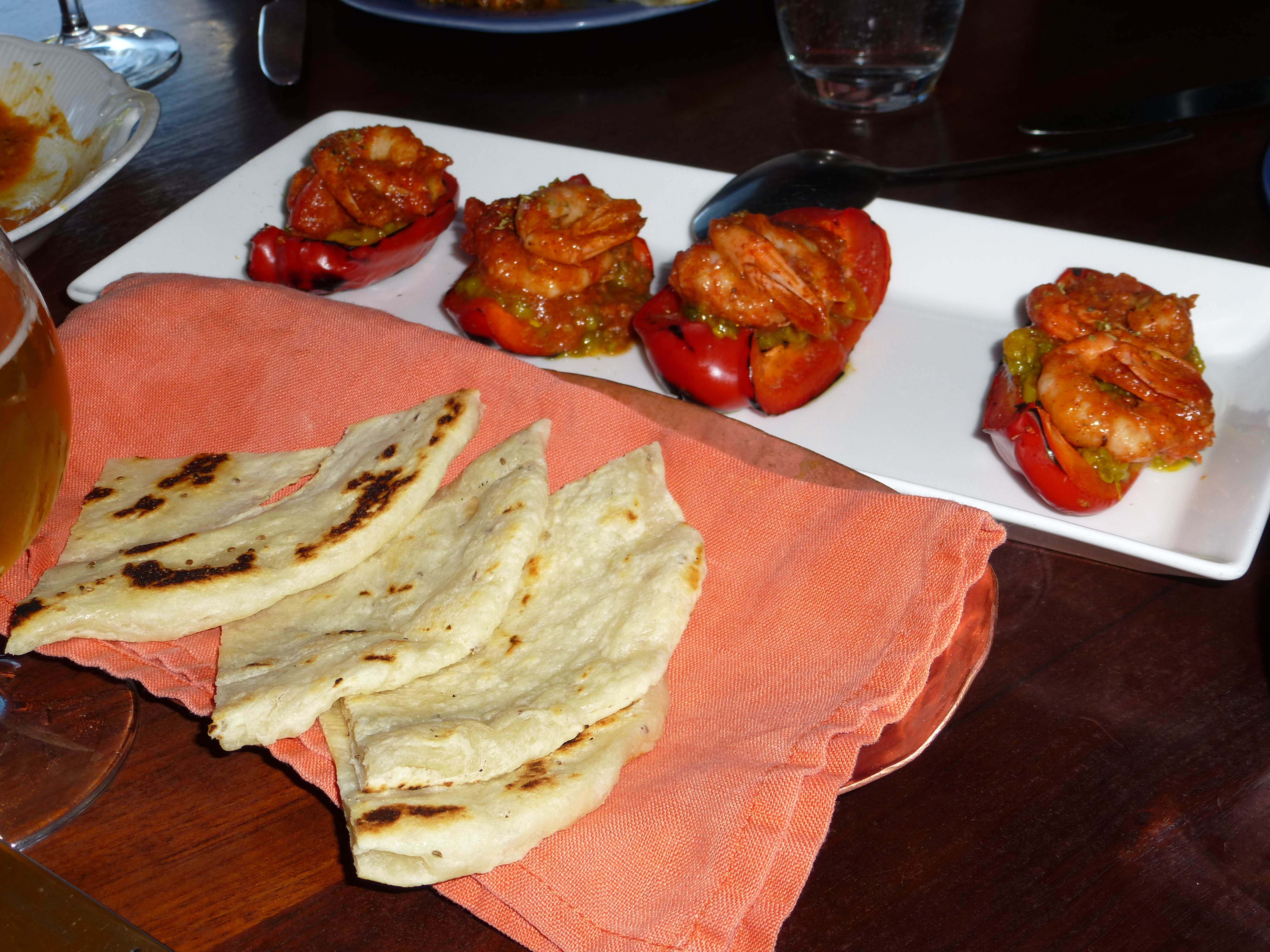 We each ordered one main dish and split them. This is braised beef shortribs with asparagus and a delicious sauce, with cardamom and ghee, that required many naans to sop up: 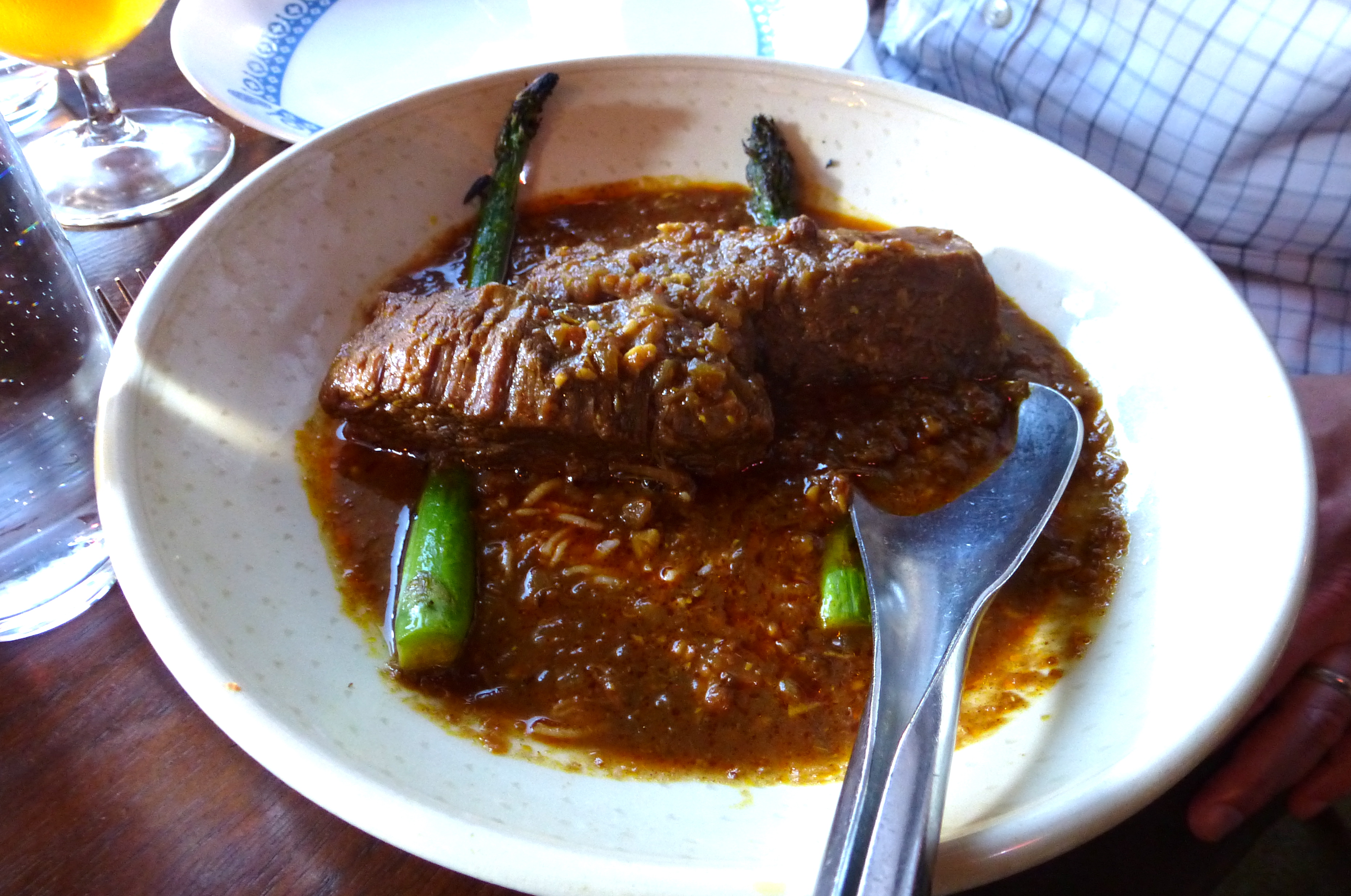 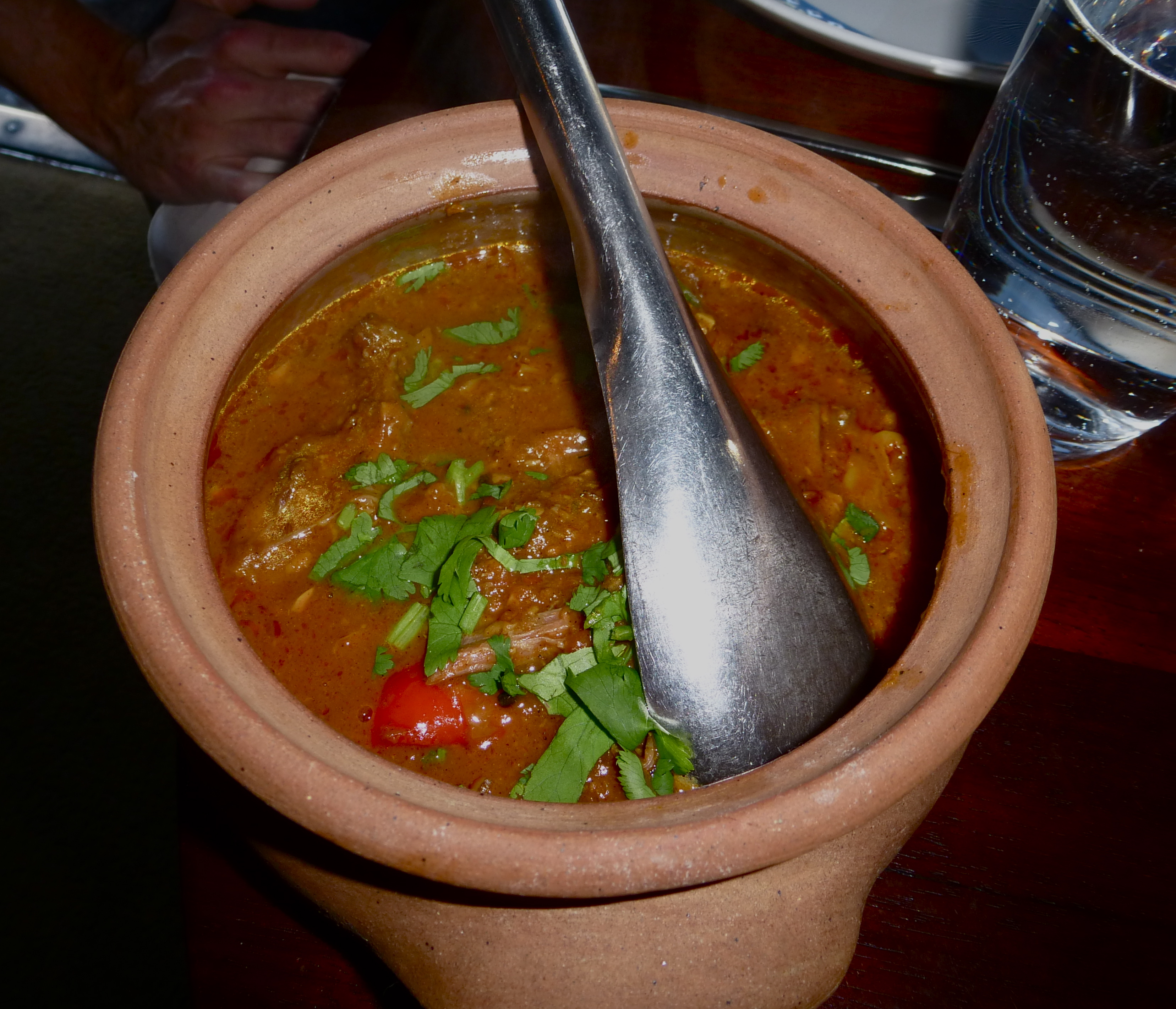 Larry chose Vij’s most famous dish, a must-have. It’s called “Wine marinated lamb popsicles in fenugreek cream curry on turmeric and spinach potatoes.” It was ethereal. As you can see, the “popsicles” are separated chops from a rack of lamb. 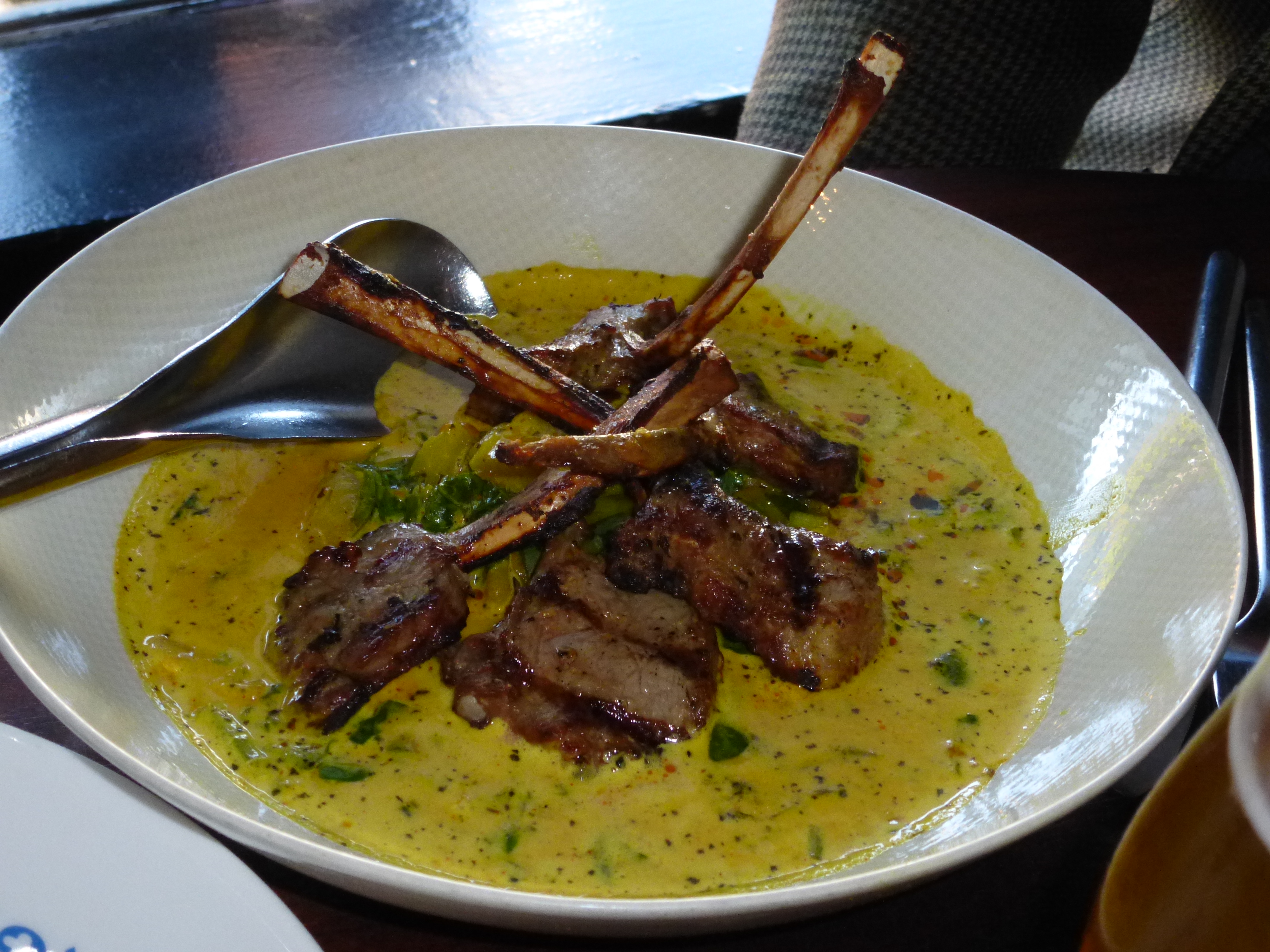 I was impressed by the colors in the sauce: 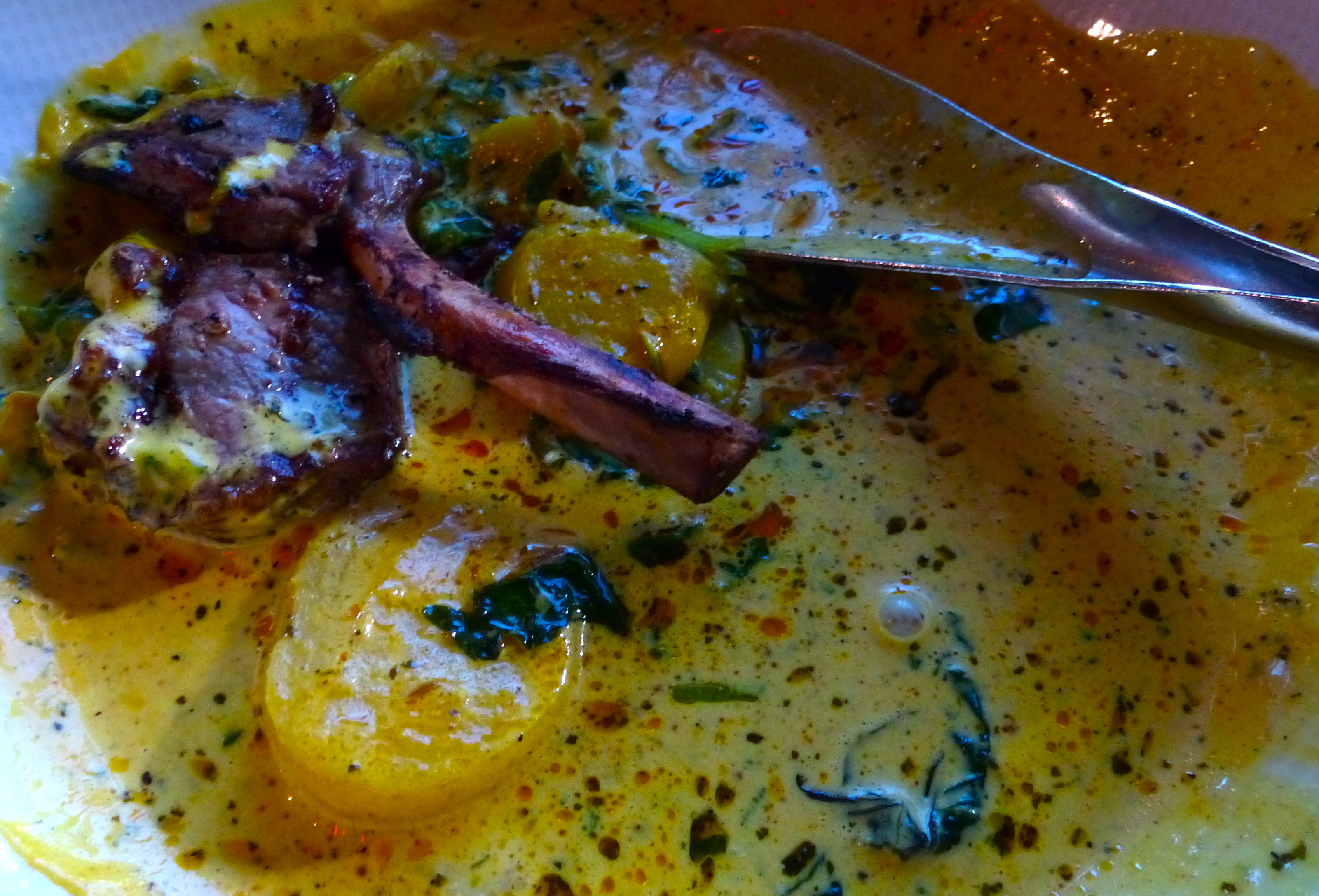 This was a vegetable dish that was a daily special. I’m not sure exactly what was in it, but it was a combination of zucchini and other vegetables in a spicy sauce, with the “balls” resembling the idli, or lentil dumplings, of southern India. It was also great: 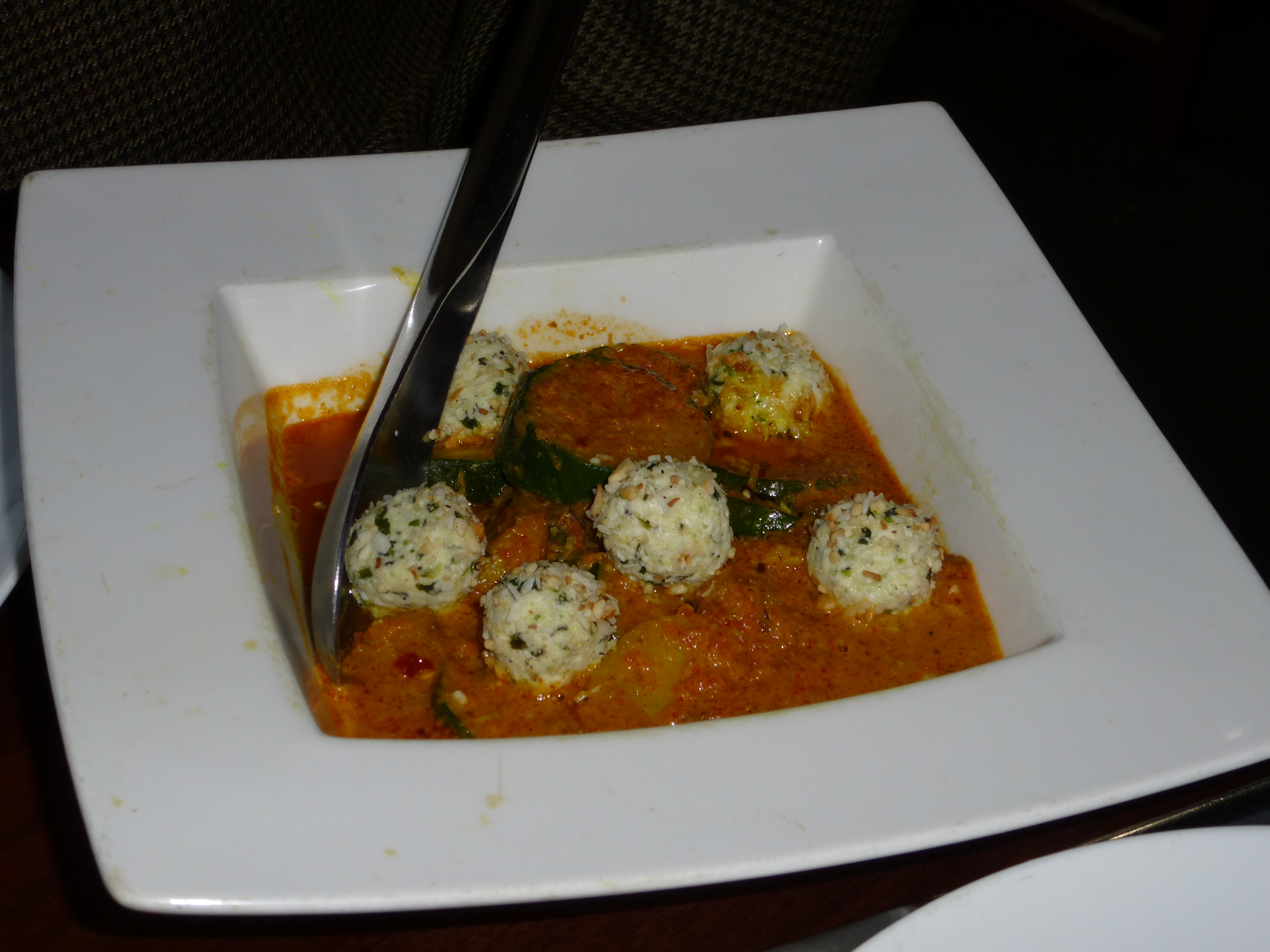 During dinner Vij himself came around, and we had a chat. I told him that I had been to India many times, and loved the food.  He lived mostly in northern India (and most of the food shown above is northern Indian style), and has had his restaurant for two decades. Larry photographed me with the Great Man, who later brought me extra chutney. 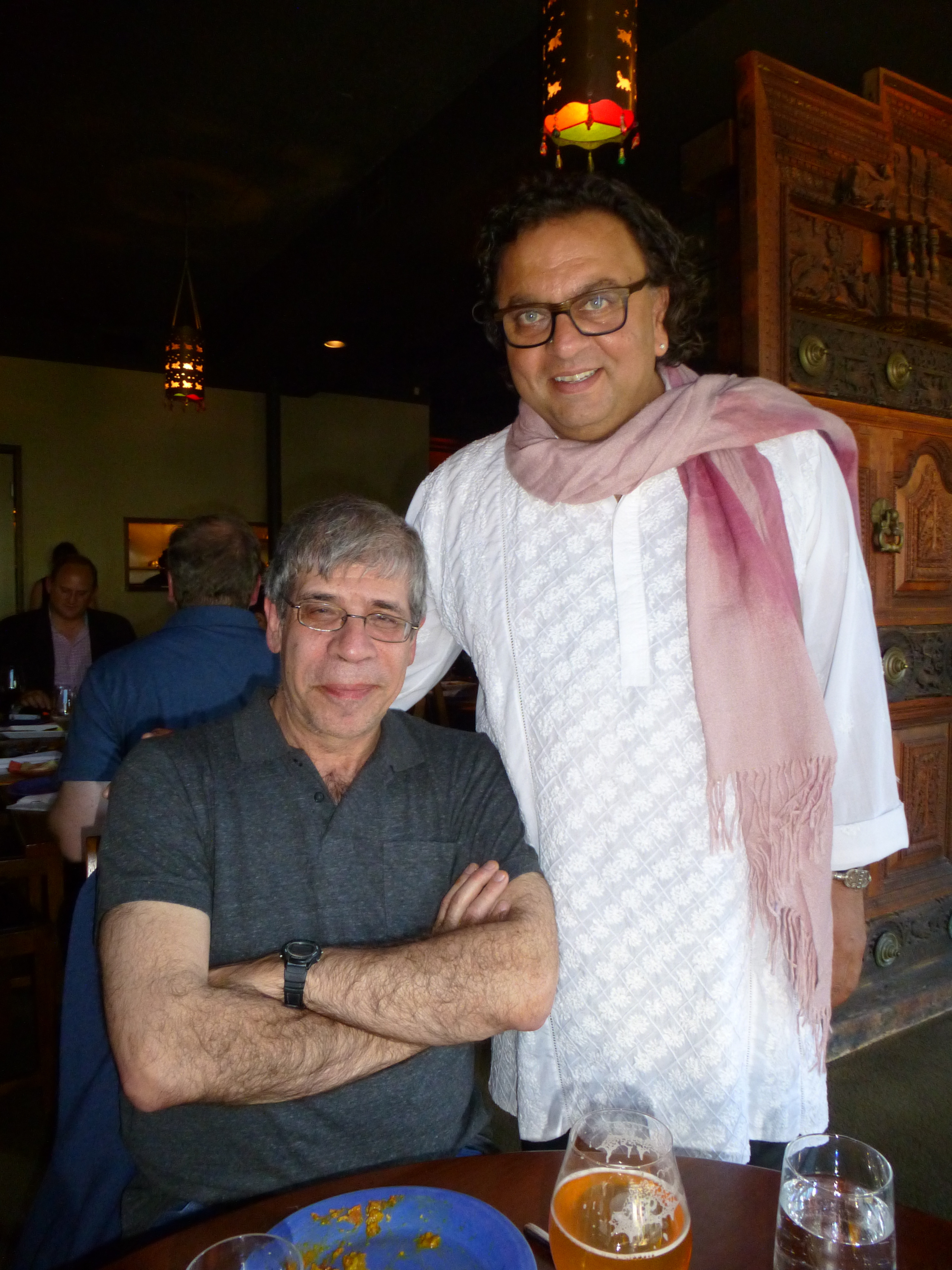 It was a spectacular dinner (reader Merilee, I believe, also suggested I visit this place), and Larry’s son goes here often. Thanks to Dr. Moran for hosting us! I doubt I’ll eat this well again on this visit to Canada.