It’s been known for a while that many species, including some vertebrates, can reproduce without sexual reproduction. But of course to observe this, one usually needs to keep animals in the lab and then see them produce offspring without ever having mated. But a new article in Current Biology by Andrew Fields et al. (reference below, abstract only at link) is the first report of vertebrates having done this in the wild.

First, a brief note. Biologists don’t really understand why animals have sex at all, for under most conditions an individual would leave more of its genes by reproducing parthenogenetically (without sex), than by reproducing sexually. If you bud off a diploid organism (one having all of your pairs of chromosomes) rather than producing an egg or sperm (having half your chromosomes) to fuse with another gamete, you leave an offspring having every one of your genes. Ditto if you simply produce an offspring from an unfertilized egg having all of your chromosomes rather than half.

Thus, any gene that impelled you to reproduce parthenogentically would leave many more copies of itself than a gene that impelled you to reproduce sexually. In fact, it would leave twice as many copies, and would sweep through a population. The population would comprise only asexually reproducing individuals. This genetic deficit of having sex is called the “twofold cost of sex.”

But since the vast majority of non-microbial species have sex, why do they? They’re losing their genes by so doing. There must be a big advantage (at least twice that of being parthenogenetic) to explain the prevalance of sex.

There are several hypotheses, and some have empirical support; for example, the idea that reproducing sexually, by allowing you to mix your genes with those of other individuals, gives you a genetic flexibility to counter the evolution of other organisms, such as parasites, that are constantly adapting to parasitize you.  But the advantage of that must, again, be very large compared to the twofold cost of having sex. Another explanation is simply that an ancestral species did overcome that problem when evolving sexual reproduction, and once you reproduce sexually it’s just physiologically and developmentally very difficult to revert to parthenogenesis. (Humans, for example, can’t conceivably reproduce without sex—except of course for one mythical woman!)

One caveat: if you produce haploid offspring, having only half your genes (the equivalent of an unfertilized egg), then you gain no reproductive offspring (as far as I know). Such an offspring is genetically the same—as far as your evolutionary potential goes—to reproducting sexually, as each offspring carries only half of your genome.

I don’t think the public realizes that the fact of sexual reproduction is pretty much an evolutionary mystery—one of the biggest mysteries we have. But we do know that some organisms that normally reproduce sexually can revert to asexual parthenogenetic reproduction under some conditions. The paper by Fields et al. summarizes the data:

Facultative parthenogenesis — the ability of sexually reproducing species to sometimes produce offspring asexually — is known from a wide range of ordinarily sexually reproducing vertebrates in captivity, including some birds, reptiles and sharks. Despite this, free-living parthenogens have never been observed in any of these taxa in the wild, although two free-living snakes were recently discovered each gestating a single parthenogen — one copperhead (Agkistrodon contortrix) and one cottonmouth (Agkistrodon piscivorus).

It’s easy to see that if you can switch from sexual to asexual reproduction, it would be good to do that when population density is low, and you might not be able to find a mate. At least then you leave some genes. But if you can do that, why bother to ever have sex? Again, there must be some advantage of sexual reproduction about which we’re ignorant.

But on to the paper. The authors studied a very rare fish, the smalltooth sawfish (Pristin pectinata), a subtropical Atlantic and Mediterranean fish that is critically endangered.  Here’s one from Wikipedia described as being in the Georgia Aquarium:

They are big, sometimes over 7 meters long. But what the hell is that saw for? Wikipedia notes that it serves as a device to both detect and manipulate prey, as well as to defend itself (by slashing) when it’s attacked:

Recent studies have demonstrated, however, that the sawfish utilize their rostrum to both sense and manipulate prey.

A sawfish’s saw is made up of thousands of sensory organs that allow them to detect and monitor the movements of other organisms by measuring the electric fields they emit. The sensory organs, also called ampullary pores, are packed most densely on the dorsal side of its beak. This allows the fish to create an image of the three-dimensional area above it, even in waters of low-visibility. This provides support for the bottom-dwelling behavior of sawfish. Utilizing their saw as an extended sensing device, sawfish are able to “view” their entire surroundings by maintaining a position low to the sea floor.

Sawfish uncover sand dwelling crustaceans and mollusks, two common prey types, by using their unique anatomical structure as a tool for digging and grubbing about in sand or mud. The sawfish churn up the sea bottom with their exaggerated rostrum to uncover these hidden food sources.

Why are they endangered if nobody eats them? As Wikipedia again notes, “Smalltooth sawfish are extremely vulnerable to overexploitation because of their propensity for entanglement in nets, their restricted habitat, and low rate of population growth.”

While they’ve been observed to reproduce sexually in aquaria, the authors found, by studying wild sawfish, that they can also reproduce parthenogenetically. And they apparently do this in two genetic ways: producing haploid offspring (presumably unfertilized eggs that develop to adulthood) and diploid offspring (which may result from the fusion of two of the four products of meiosis, yielding a diploid egg that also grows to maturity).

How did they find this out? Not by observation, since they were dealing with wild specimens, but through genetics. They sampled 190 individuals captured off of Florida, and released them after taking a sample of either blood or tissue.

They analyzed 40 variable genes in each individual and looked to see if individuals had two copies of their genes (i.e. two different “alleles”, or gene forms, at these genes), or only one. In normal outbreeding, sexually-reproducing populations, individuals will often have different forms of genes at some loci (“heterozygous”), with some having the same form of a gene (“homozygous”). For example, individuals with AB blood type have two different alleles at the Landsteiner blood-group locus, while individuals that are O have two similar alleles.

The similarity of genes within each individual was expressed by an IR (“internal relatedness”) measure, which will be close to zero if an individuals’ parents are genetically unrelated (there will be a lot of heterozygosity in that offspring), but will be close to 1 if individuals are either haploid (having only one copy of each gene, so heterozygosity is zero) or if an individual’s parents are very highly related, as would occur after generations of intensive inbreeding (like brother-sister mating), something that is very unlikely in this fish.

Here’s what they found, with the histogram of IR values shown below the picture of the fish: 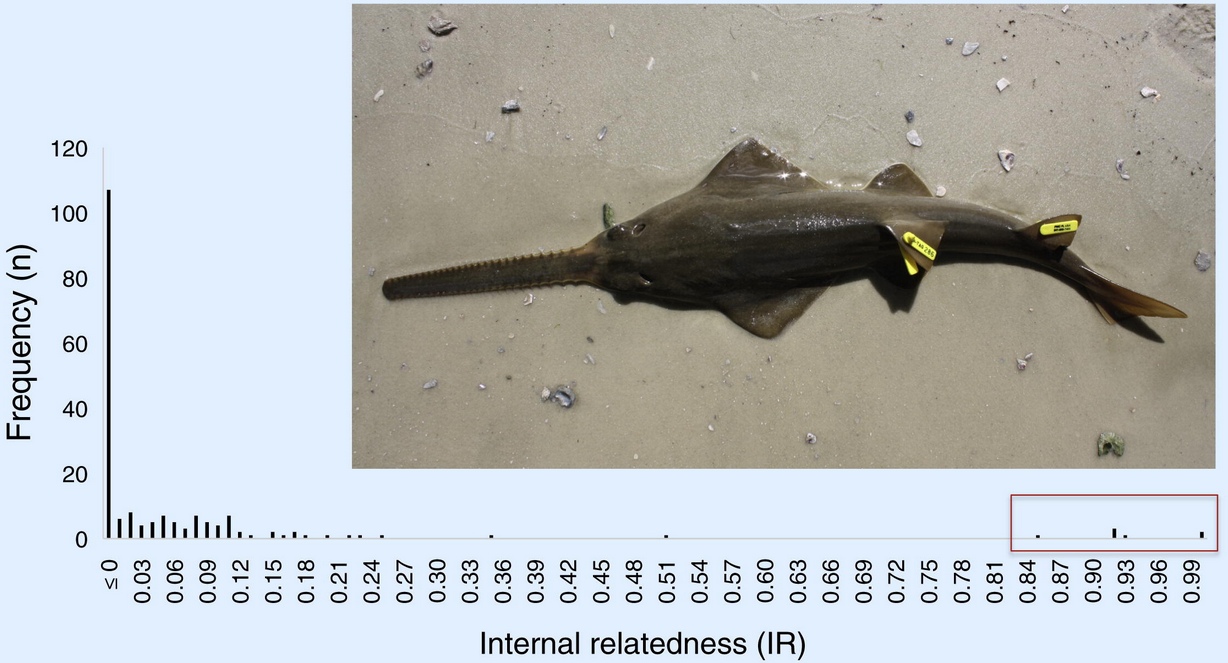 Note that the graph is bimodal: the vast majority of IR values are low, but seven individuals (in box at right) had very high IR values. Two of these showed no genetic variation, while five had variation at only one or two of the 40 genes sampled. All of these high-IR individuals are female, as expected under parthenogenesis. (I don’t know how sex is determined in this fish, but if it’s like an XY system, the fish would have to be female because they’d be either XX or XO, since a parthenogenetic female parent doesn’t have Y chromosomes.)

The authors conclude that the two completely invariant fish were haploid, the result of parthenogenesis, which would be the first indication (see above) of a vertebrate reproducing successfully in the wild without sex. (I am taking the authors’ word for this; readers may know of some exceptions. (There are some fish that are parthenogenetic but require fertilization from a male, though the sperm serves a purely developmental function and its chromosomes are not incorporated into offspring.)

What about the five fish that were homozygous at nearly all genes, but variable at one or two? The authors interpret this as a result of parthenogenesis, too, but a form that produces diploid offspring. They hypothesize that this is automictic parthenogenesis: the mother was heterozygous at some of her genes, and when she came to produce eggs (this normally involves producing four haploid egg precursors, most of which—the “polar bodies”—degenerate before fertilization), two of those products fused to form a diploid egg. The two that fused were nearly genetically identical, since they were the fused products of simple cell division of a single haploid cell, but there might have been a rare “recombination” event with a non-identical polar body before this fusion.

So this vertebrate apparently reproduces occasionally without having sex. That would, of course, be adaptive in a species of low density, like this one, for it’s better to leave some of your genes than none.

Are the authors correct in their presumption that they’ve detected asexual reproduction in parents simply by looking at an offspring’s genes? Given the bimodality of the graph above, and no sign of severe inbreeding in this species (in such a case every individual would have a high IR value), I think they’re right. This opens up the possibility, if you can survey many variable genes, of seeing how often asexual reproduction occurs in the wild, and whether, as expected, it occurs more often in low-density populations.

The only remaining question for this group is whether Mary could have reproduced this way—and don’t think that some crazy religionists won’t use this as an example of how a virgin can produce an offspring. The problem, of course, is that if Mary had reproduced this way, Jesus would have been either a female or a haploid intersex with an XO chromosome constitution, producing a short female with gonadal dysgenesis (rendering the individual sterile) and a webbed neck. (In this case the “H” in Jesus H. Christ could stand for “haploid”.) Since the New Testament mentions no such abnormalities, I conclude that, on genetic grounds, the Jesus story is a myth.

78 thoughts on “A miracle? Sawfish born of a virgin mother”