Earlier today I posted a video of a pair of swifts that met up for the first time in 9 months. In the comments, Mark Sturtevant pointed out that on the male (the front bird) you can see an ectoparasite scuttling about: 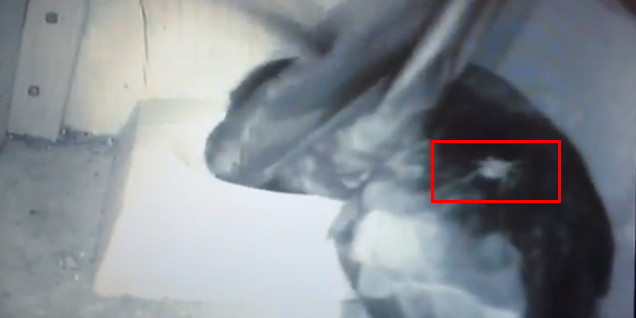 Here’s the video again. Go to 50 seconds, which is about the first moment you can see the parasite, as a white blob on the back of the male’s neck. It starts scuttling around and can be clearly seen at around 1:10.

Chat on the comments and on Twitter identified the beast in question as probably Crataerina pallida, a wingless fly like the wingless bat louse fly Jerry posted the other day. Morgan Jackso (aka @bioinfocus) has gone on to pose some interesting questions about this particular fly over on his website Biodiversity in Focus.

You should head over there to see the full argument, but Morgan’s starting point is that this species does not lay eggs, but instead gives birth to live maggots, that presumably overwinter as pupae in nest boxes:

This leads us to an interesting question of how this louse fly got onto this bird! The fly was already aboard the bird when it entered the box (if you watch closely you can see a white blob that moves around neck is first visible at 0:06, immediately after the male bird approaches the sitting female). This means that one of two things happened: either the male bird has in fact carried its little parasite friend down to Africa and back (something that neither Hutson nor Walker & Rotherham (2010) believe to be the case) (and assuming this was the first nestbox that the bird stopped in, which I take to be the presumption of the ornithologists who posted the video and stated it shows a male reuniting with its mate from last year in last year’s nestbox), or alternatively, the male bird did stop for a time in another nestbox where it picked up its little hitchhiker, and then proceeded on to its longterm mate.

Curiouser and curiouser. Even more curiouser, as we were chatting about this on Tw*tter, the BBC programme Springwatch showed a video of their swift cam, showing a brooding female, who also had one of these beasts scuttling about on her. Lewis Spurgin, who ID’d the beast on our post, said:

If you have expert knowledge on this, please chip in below, and on Morgan’s site!

19 thoughts on “On the swift’s scuttly wingless fly friend”