To answer your first question, the cat, named Tiffany Two, is all of 26 years old. And according to the Guinness World Records site, she’s now the oldest living cat:

Born on March 13, 1988 in San Diego, California, Tiffany Two was bought by her owner Sharon Voorhees from a local pet shop when the record breaking kitty was six weeks old.  Sharon paid $10 for her and commonly refers to Tiffany Two as the “best money ever spent”.

. . .Sharon settled on the name Tiffany Two as something of a tribute to another tortoiseshell cat she once owned in the 1970s that also boasted a beautiful multi-coloured coat.

Despite her incredible age, she still has good sight and hearing. Besides very small ailments such as high blood pressure from time to time, Sharron describes her as “not feeble and still able to go up and down stairs”.
“She’s not afraid of anything or anyone. She walks right past the dogs, she’s very feisty!” Sharon explains, recounting the record-breaking cat went missing for a full two years.

Nevertheless, Tiffany Two also has a soft side. Inseparable from her owner, Sharon says she has a sweet demeanour and loves to be petted.
She eats a varied diet with both wet food and dry food and resides indoors but frequently also goes outdoors when she fancies.
Sharon got in touch with Guinness World Records after her sister spotted the record for oldest living cat was then held by Poppy, an English feline born in 1990.

Here’s Tiffany Two, who doesn’t look a day over 18: 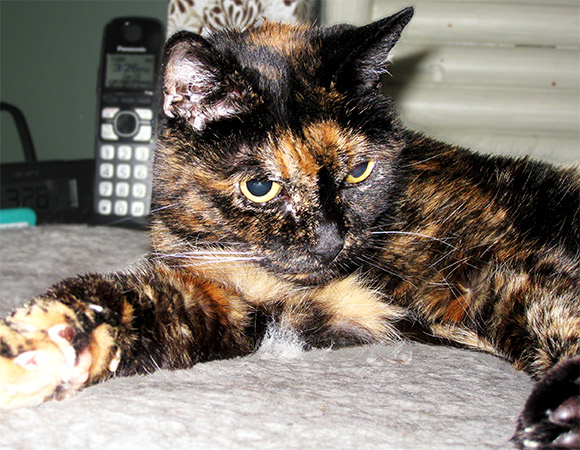 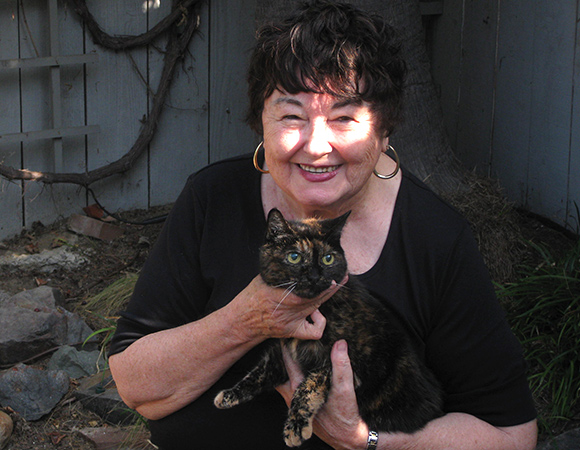 But her longevity is far from seting the record: in fact, it’s 12 year’s shy of the record, as I noted in an earlier post on aged cats, which has some videos and photos. It also shows the record holder, one Creme Puff, owned by Texan Jake Perry, who has raised a number of cats holding records for longevity. As the Wikipedia article on Creme Puff and Jake Perry’s other Cats:

Perry also owned Granpa Rexs Allen, who was claimed to have been born in Paris, in 1964 and died 1998, aged 34 years and 2 months. Granpa was posthumously awarded 1999 Cat of the Year by Cats & Kittens magazine. Granpa was featured in an earlier edition of Guinness World Records. The co-authors of at least one book have pondered whether the longevity of Perry’s cats may have had something to do with an unusual diet of, among other things, bacon and eggs, asparagus, and broccoli, concluding that Perry “must be doing something right.”

My earlier post shows Jake cooking breakfast for his cats, giving them their bacon, egg, and asparagus. I’ll put the video below again as it’s adorable. As I said,

Here’s a 9.5-minute video of Jake Perry and some of his many his cats. It’s lovely—watch it! You can see Perry cooking breakfast for the cats; Granpa, a Sphynx, makes an appearance; and record-holder Creme Puff finally shows up at 7:23, looking very good for 35!

Is this animal, who seems to like water and nuzzles a fish, really a cat, or a small d*g in a cat suit?

Finally, from OddityCentral.com, we have a report on German fashion designer Karl Lagerfeld and his famously spoiled cat, Choupette. Get a load of this (my emphasis):

German fashion designer Karl Lagerfeld is undoubtedly a rich man, but here’s a shocker – even his cat Choupette is richer than most people. The furry white feline managed to earn over three million dollars from just two days of modelling work. She is now believed to be the world’s most pampered cat – she has two maids, enjoys First Class travel around the world and even has her own Instagram account with hundreds of thousands of followers.

According to 81-year-old Lagerfeld, creative director of Chanel and Fendi, Choupette did two modelling assignments last year – one for Japanese cosmetics brand Shu Uemura, and the other for a Opel Corsa car calendar. Collectively, the two jobs earned her a whopping three million euro – a figure that professional supermodels might probably get paid for a much harder year’s work. 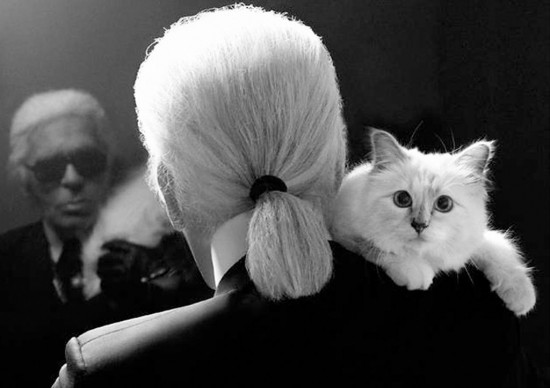 Although Choupette’s earnings are dwarfed by feline competitor and internet sensation Grumpy Cat ($100 million commercial deals), Lagerfeld says that’s only because he’s picky about Choupette’s assignments. “I don’t allow her to do foodstuffs and things like this. She’s too sophisticated for that,” he explained.

“She hates other animals and hates children,” he added. “She stays with me always and has two personal maids. They play with her, they have to take care of her beautiful white hair, the beauty treatments for her eyes, and they entertain her. She is the center of the world. If you saw her, you would understand.” 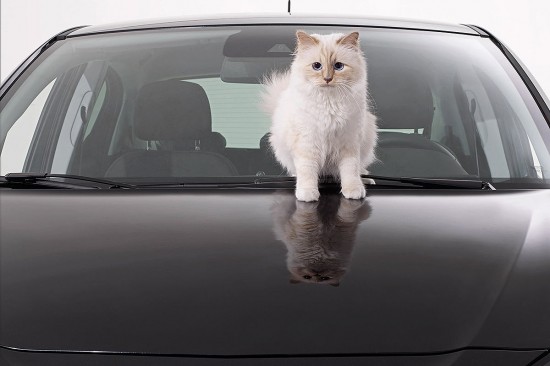 Look what she eats and drinks!:

Lagerfeld makes sure his feline muse gets all that she deserves. Choupette has her own iPad and only drinks bespoke mineral water that was specially blended for her using a cocktail of Swiss, Swedish, British and German water by LeWater Bar Colette in Paris. Her food, prepared by her own personal chef Patrice, consists of liver pate, chicken and fresh fish. The morsels are served in her favorite silver dishes made by French luxury goods company Goyard.

When she is not eating at home, Choupette dines at the fanciest restaurants in Paris, where she is welcomed like royalty. The famous La Voltaire restaurant on the banks of the Seine is actually preparing a special called ‘Choupette’s Eggs’ – a concoction of chopped boiled eggs with fresh mint. Cafe De Flore also offers ‘Croquettes a la Choupette’ to the special guest.

What can you say to that except “Oy vey!!!”?  But of course all cats secretly desire to be treated like Choupette.

To honor his favorite pet, Lagerfeld has designed a range of accessories like socks, keyrings, and shopping bags, all adorned with a white cat motif. The moody French sensation was also featured in a 128-page coffee table book called The Private Life of a High-Flying Fashion Cat. The book consists of accounts from her fabulous life, as told by her personal maids Francoise and Marjorie. 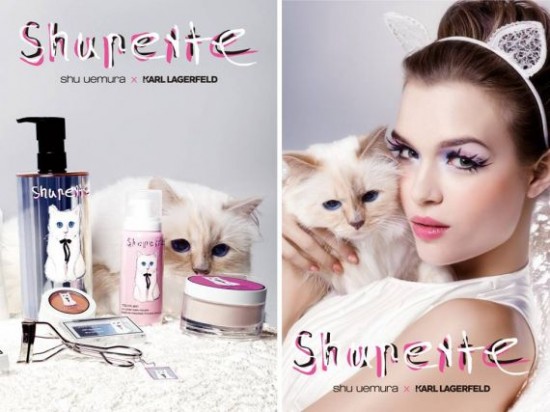