Today’s Google Doodle celebrates the 360th birthday of Bartolomeo Cristofori (could he be an ancestor of Astronaut Sam?). You know who he is, right? (I didn’t.) But we all should, for he invented the piano. As the Guardian explains,

According to Encyclopaedia Britannica, the instrument Cristofori invented was referred to during his lifetime as a harpsichord that plays soft and loud, from which its name is derived. In Italian, the phrase is gravicembalo col piano e forte.

On the blog dedicated to its doodles, Google wrote that one of Cristofori’s “biggest innovations was creating a hammer mechanism that struck the strings on a keyboard to create sound. The use of a hammer made it possible to produce softer or louder sounds depending upon how light or hard a player pressed on the keys”.

It added: “Being able to change the volume was a major breakthrough. And that’s exactly what doodler Leon Hong wanted to highlight in this interactive doodle.”

Cristofori’s entry in Encyclopaedia Britannica notes that little is known of his life and that his invention was not well known in his lifetime, even if it has since become ubiquitous.

It reads: “Cristofori apparently invented the piano around 1709, and, according to contemporary sources, four of his pianos existed in 1711.”

The Google page features an interview with creator Leon Hong. One Q&A:

What is your favorite part about the finished doodle?

My favorite part of the doodle is the animation of Cristofori playing when the volume is set on forte. If I had more time I would have put even more bounce to his bottom. I hope people decide to do more research after playing with the doodle and learn more about him.

Click on the screenshot below to go to the page and listen to “Jesu, Joy of Man’s Desiring“. You can vary the speed and volume (and the player’s vigor and bottom-bouncing) by moving the slider on the right: 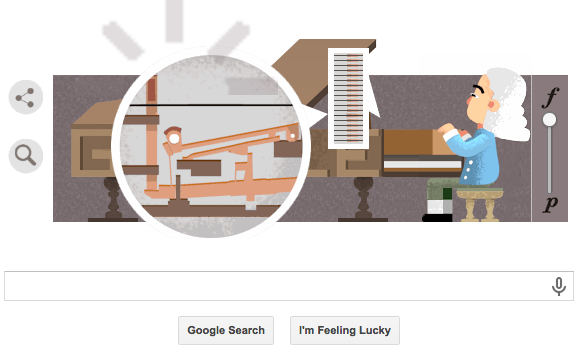