When I first heard about the Charlie Hebdo massacre, and saw some of the cartoons that, claimed the apologists, were racist and Islamophobic and thus “provoked” the murders, I did some research. I read about the magazine, looked at the cartoons in context, and, most important, consulted French-speaking friends (I read it okay, but preferred greater expertise) about what exactly the slogans and cartoons meant and what (if they read Charlie Hebdo) the magazine was all about.

From that I concluded two things. First, Charlie Hebdo was not “Islamophobic” or racist, for it made fun of all religions on a pretty equal basis, and defended real racial groups (Muslims aren’t a race by anyone’s lights) against French xenophobia. The artists and writers were clearly a bunch of heathens, and saw right through the follies of faith and real ethnic hatred. Catholicism was a frequent target. Second, the cartoons that supposedly demonized Muslims were actually either making fun of faith or calling out the French Right for being anti-Muslim and anti-immigrant. They were in fact defending minority groups against real hatred and racism.

Finding that out didn’t take much work, and so I am appalled when some bloggers (and now writers and cartoonists like Garry Trudeau) still call out Charlie Hebdo for purveying “hate speech”. I’d like to point out two items that further dispel this notion, though Social Justice Warriors who have already decided to tar Charlie Hebdo with manufactured outrage will never change their minds.

First, I call your attention to the New Statesman article by Robert McLiam Wilson, “If you don’t speak French, how can you judge whether Charlie Hebdo is racist?” Wilson, though Irish, actually writes for Charlie Hebdo (he’s the sole Anglophone columnist), and he says this:

I read the papers and the blogs and the general runes. The growing consensus seems to be that Charlie Hebdo is, at the very least, deeply dodgy, if not overtly racist. Well, that’s a blow, I must say. Who knew I’d end up writing for some cartoon version of Mein Kampf?

Much of this anti-Charlie prissiness comes from how the magazine has been typified in the Anglo press. ie, idiotically for the most part. An infinity of pundits have made blithe diagnoses of general knavishness while not speaking any French at all.

This bears repeating. No. French. At. All. The point about language is absolutely crucial. Indeed, it may well be the only real point. It is so preposterous that it makes my head spin. How can you make any sensible judgement about Charlie if you cannot read it? Is it enough to look at the pictures? Didn’t we used to hesitate before doing something so confidently asinine? Can you imagine how enraged we would be if monolingual French people judged Private Eye or Spitting Image with the same blind assurance.

Do the writers boycotting Charlie in New York all speak French? If they don’t, then, seriously, how informed can their opinions be? You might as well ask your budgie for comment. So, Feathers, what’s your view?

Here’s an example of a Charlie Hebdo cartoon that, you may recall, was represented as racist right after the murders: 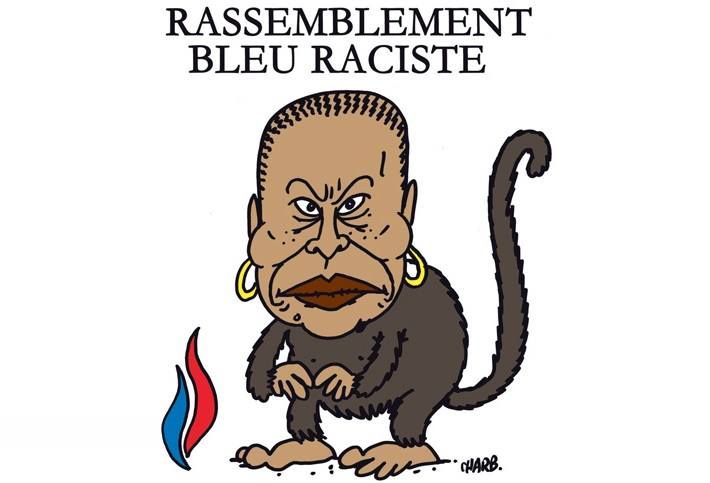 This was explained to me by a Francophonic friend, but let me reproduce Wilson’s take:

A lot of this is centred around a cartoon that depicted Christiane Taubira, the French justice minister, as an ape. It is much-reproduced without its line of text Rassemblement Bleu Raciste (Racist Blue Rally). A crucial detail since it lampoons the Front National slogan Rassemblement Bleu Marine (Navy Blue Rally), a pun on the name of the FN leader Marine Le Pen. And the image itself was a mocking attack on a series of right-wing publications and websites bunged to the brim with disgraceful imagery of the minister. Without the snipped-off text underneath, and the knowledge of the lamentable tosh it was lampooning, of course Charlie would seem racist. It would seem racist to me too. But to strip the image of its fundamental components like this is akin to saying the incomparable Jonathan Swift was a baby-eating Nazi and that A Modest Proposal was actually a cookbook.

He then adds this (Wilson’s piece is funny):

Charlie is often vulgar, puerile and slightly nauseating. But everyone endures the brunt of this approach: right, left and in-between. They are not always funny (they are French, after all). But sometimes, that is because they are doing 4-page spreads on the reality of Roma camps in France or doggedly chronicling the gross extremes of France’s lurch to the right.

They have a weekly space for animal rights stories, for Chrissakes!!! Run by a woman who calls herself Luce Lapin. With the best will in the world, even if Lucy Rabbit wanted to be a racist or a fascist, how good at it would she be with a name like that? What would all the other racists and fascists think? The truth about the Charlie people is that they’re …well…just a little bit geeky.

Yes, Charlie is tasteless and discomfiting. Have I somehow missed all the gentle, polite satire? That amiable, convenient satire that everybody likes.

Finally, the Jesus and Mo artist has sent out this tw**t breaking down Charlie Hebdo posts by topic.  You can read most of the figure without knowing much French, but the title, “De qui se moque-t-on,” can be translated as “Who are they making fun of?” 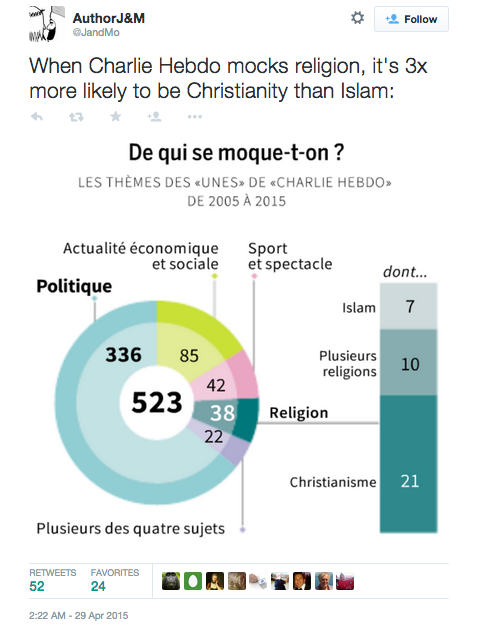 85 thoughts on “Charlie Hebdo was neither racist nor Islamophobic”