As the Brits would say, “Sir, this is too damn much!” (Well, I don’t know if they’d say that, but it sounds like something they’d say.) And it shows, as reader Pyers said when he sent me the link, “You just cannot, I repeat cannot, make this up….” Indeed.

According to Laura Predergast at today’s Spectator and Colin Cortbus at The Tab, a student organization at Goldsmith’s, a unit of the University of London, banned white people (as well as males) from an anti-racism event held yesterday.  As The Tab reports, the event was aimed at “’challenging the white-centric culture of occupations’, ‘diversifying our curriculum’ and building a ‘cross-campus campaign that puts liberation at the heart of the movement’”. 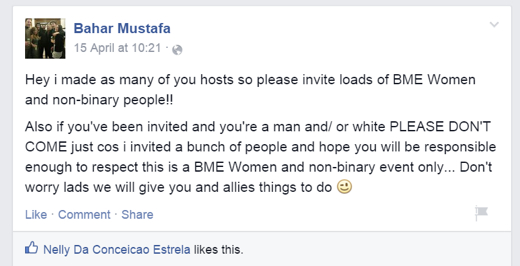 Last week, one faction of the union hosted a screening of the film Dear White People and advertised it as being ‘for BME students’.. . . [A] poster specifies that this screening is for students of ‘African, Caribbean, Arab, Asian and South American ethnic origin’. The union’s welfare and diversity officer and education officer both reiterated this message on Facebook and Twitter, then stated that before the screening, there was a BME ONLY social happening at Cafe Natura. 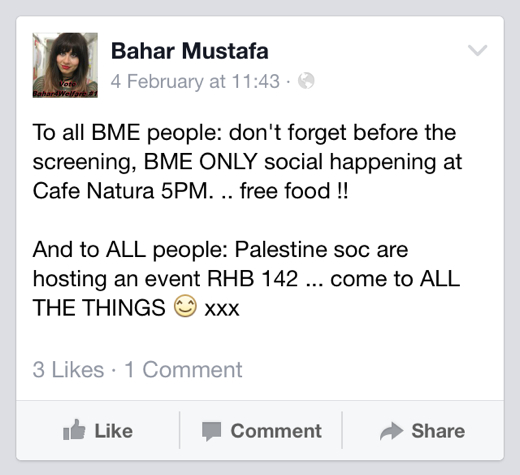 This woman is clearly an authoritarian.

A senior Student Union society president, speaking on condition of anonymity, slammed the event and the Track record of Bahar Mustafa.

Speaking anonymously, they said: “For Bahar to have the nerve to write this is patronising beyond belief.

“She (if that is her preferred gender pronoun) has made it very difficult for white cis males on campus who feel like they can’t say anything for fear of retribution. the irony that she (or they) think that they are diversifying the student community in the name of feminism and multiculturalism is laughable.”

Goldsmith’s SU is clearly wonky.  In 2014 the student assembly rejected a proposal to “commemorate Holocaust Memorial Day and genocide.” Why?:

Education officer Sarah El-alfy urged students to vote against the proposal, rejecting it as “eurocentric”.

. . . One student added: “The motion would force people to remember things they may not want to remember.”

Another suggested she couldn’t commemorate the Holocaust because she thought the Union was explicitly “anti-Zionist”.

One of the students present said the proposal should be voted against as it would affect the Union’s stance on the Israeli-Palestinian conflict.

. . . One student named T. Walpole, present at the Assembly, objected: “Our union is anti-Zionist.”

They added: “This is a colonialist motion. Vote it down.

“White people should not be proposing motions to condemn genocides without a lot of thought. This does not have that thought.”

Don’t get me wrong: I don’t have any objections to a BME Society, and I suppose if they want to hold events only for members, and bar others, then that would also be technically okay if other organizations were allowed to do the same.  But it all seems deeply counterproductive if their goal is really to foster a diverse curriculum. To do that, they’ll have to have conversations with men and non-BME people.  And really, banning white people from an anti-racism campaign? Did Martin Luther King ban white people from his rallies?

Finally, what’s the point of banning men from a BME anti-racism event? It’s about racism, not sexism, and even if it were about sexism, shouldn’t males get to hear what’s said?

If these young people really want to change society, they’ll have to get out of their echo chambers at some point and engage the people whose views they want to change. That, after all, is what they’ll encounter when they leave university.

Clearly this kind of identity-politics virus has crossed the pond. I’m just not sure in which direction.

148 thoughts on “More college madness: White people (and men) banned from an “anti-racist” event at University of London”