UPDATE: I’m a real dummy; I failed to check the dates of any of these items and a eagle-eyed reader noted that they’re all from 2011! I should have seen that from the dates on the Science paper, if not the links. Oh well, it’s still interesting stuff.

A paper in Science by Ryan McKellar et al. (reference and link below; no access to full paper without $$!) reports the amazing discovery of feathers preserved in amber from the late Cretaceous (around 65-90 million years ago). The amber (fossilized plant resin) was discovered in deposits at Grassy Lake, Alberta, Canada. There’s also a nice piece in The Atlantic which summarizes the importance of the findings and a series of photos at io9.com with explanations of what each photo shows. The striking finding is that there are all stages of feather evolution seen in the amber, from simple filaments to very complex feathers.

Now we’re not sure what creatures these feathers belong to, so I’m jumping the gun a bit with the title. Our uncertainty is because there are no fossils of anything in the layer where these feathers were found. But the authors justify the conclusion that these are dinosaur feathers because they’re in layers near those containing near dino remains:

Although neither avian nor dinosaurian skeletal material has been found in direct association with amber at the Grassy Lake locality, fossils of both groups are present in adjacent stratigraphic units. Hadrosaur footprints are found in close association with the amber, and younger (late Campanian and Maastrichtian) strata of western Canada contain diverse nonavian dinosaur and avian remains. There is currently no way to refer the feathers in amber with certainty to either birds or the rare small theropods from the area. However, the discovery of end- members of the evolutionary-developmental spec- trum in this time interval, and the overlap with structures found only in nonavian dinosaur com- pression fossils, strongly suggests that the proto-feathers described here are from dinosaurs and not birds.

Since we already have all kinds of fossil dinosaurs showing imprints of feathers, and those feathers seem to range from simple filaments to more complex feathers similar to those of modern birds, what does this finding add to what we already know? The answer is that these are 3-dimensional feathers that aren’t compressed, and give us a much better look at what early feathers were like. And that view supports a previously-suggested scenario of where bird feathers came from.

That scenario, as sketched in the paper, is diagrammed below. It begins with single filaments (I) that branch out to form a tuft of filaments (II), and some of these either coalesce to form a central shaft, or “rachis” (IIIb), or develop secondary branches (IIIa), with the next step the development of “tertiary” branches (IIIa + b).

Then those tertiary bits can either develop hooks (“distal barbules”: “d.b.”  in the middle figure) or unhooked “proximal barbules” (“p.b.”).  At this point, stage IV below, we pretty much have a modern feather with a central shaft and side filaments that hook together to make the feather into a unit (essential for flying).  In stage V, other specializations develop. Remember, this figure represents a hypothesis about how feathers evolved before the amber feathers were found. 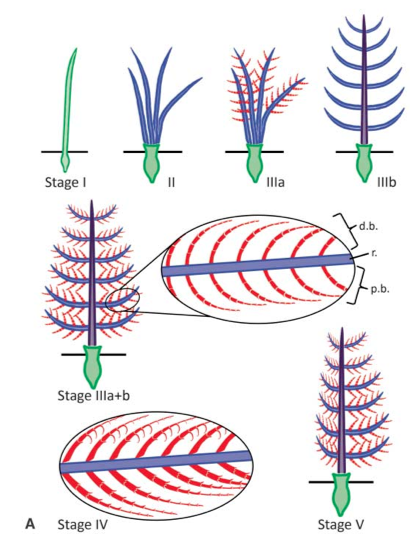 What the authors found was that basically every stage of feather development could be seen in the eleven specimens of amber analyzed in the paper. This, then, supports the scenario given above. I’ll show some photos from io9, but let me first add four things.

First this scenario for feather development suggests that feathers evolved, as I and many others long suspected, for thermoregulation. The filaments are, according to the authors, present in densities that would help thermoregulation and “protection” (I’m not sure what they’d protect), militating against any use in gliding (filaments don’t help you glide) and perhaps against ornamentation as their sole function (though they could also have served to ornament the bird).

Second, some of the feathers are so well developed that, according to the authors, they would have enabled the dinosaurs bearing them to fly. I’m not an expert on this, so I’ll take their word for it.

Finally, all of these stages of feather evolution were found in roughly the same time period (same deposit), implying that there were all sorts of dinos coexisting with different degrees of feather evolution. Certainly not all of them gave rise to modern birds; most surely went extinct along with the rest of the dinosaurs. In fact, it’s likely that none of these specimens are from a species that was ancestral to modern birds.

Now to the feathers; all indented captions are from io9:

An isolated barb from a vaned feather, trapped within a tangled mass of spider’s web in Late Cretaceous Canadian amber. Pigment distribution within this feather fragment suggests that the barb may have been gray or black. Image via Science/AAAS

This is one of the later stages of feather evolution. 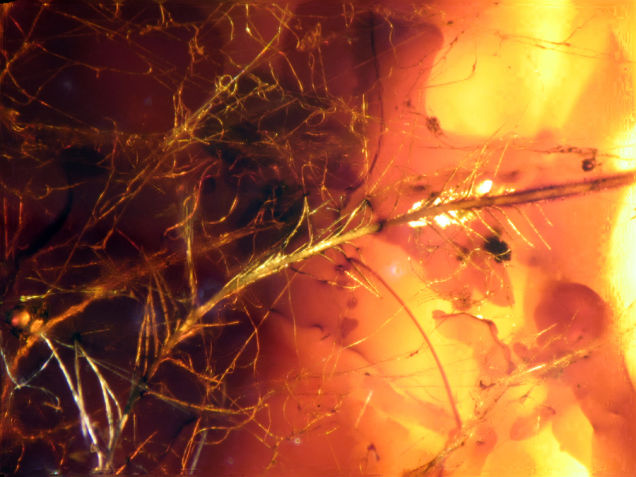 Below is an earlier stage when there were just filaments. Notice that there are many all together, which supports the notion that they could have been involved in thermoregulation.

Numerous individual filaments in Late Cretaceous Canadian amber. These filaments are morphologically similar to the protofeathers that have been found as compression fossils associated with some dinosaur skeletons. Pigment distributions within these filaments range from translucent (unpigmented) to near-black (heavily pigmented). Image via Science/AAAS 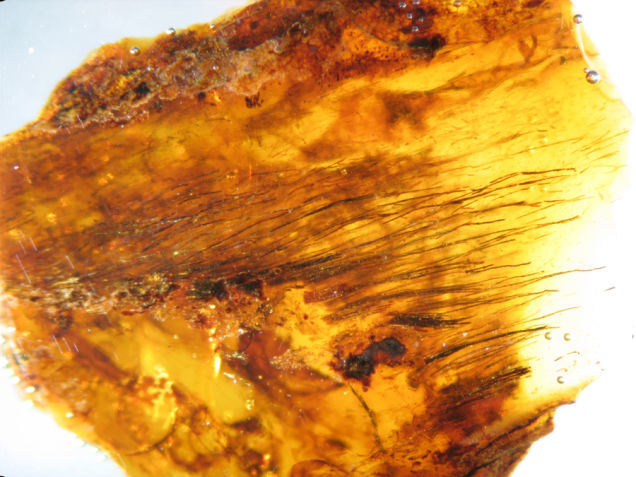 Here are the water-retaining feathers with filaments coiled at their base:

Cross-section through a feather with basally-coiled barbules, accompanied by a microphysid plant bug. The helical coiling observed within these barbules is most obvious in isolated barbules within the image, and is directly comparable to coils found in modern bird feathers specialized for water uptake. The high number of coils in the amber-entombed feather is suggestive of diving behavior, but similar structures are also used by some modern birds to transport water to the nest. Image via Science/AAAS

Series of six feather barbs in Late Cretaceous Canadian amber. Localized pigmentation creates a beaded appearance within each barbule: This has implications for the structural interpretation of fossil feathers exhibiting this general morphology. Pigment distribution within the specimen suggests that the feather would have originally been medium- or dark-brown in color. Image via Science/AAAS

A feather barb within Late Cretaceous Canadian amber that shows some indication of original coloration. The oblong brown masses within the dark-field photomicrograph are concentrated regions of pigmentation within the barbules. In this specimen, the overall feather color appears to have been medium- or dark-brown. Image via Science/AAAS 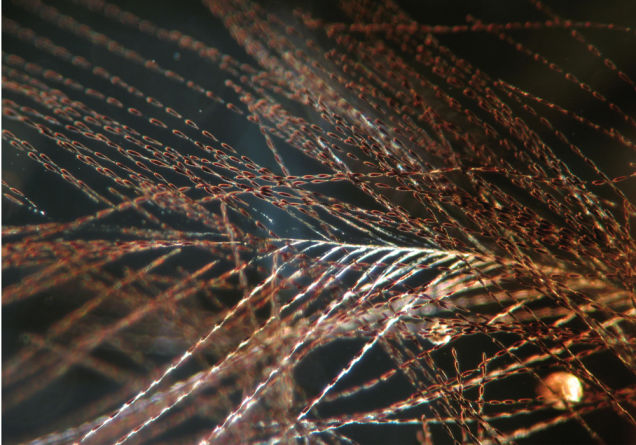 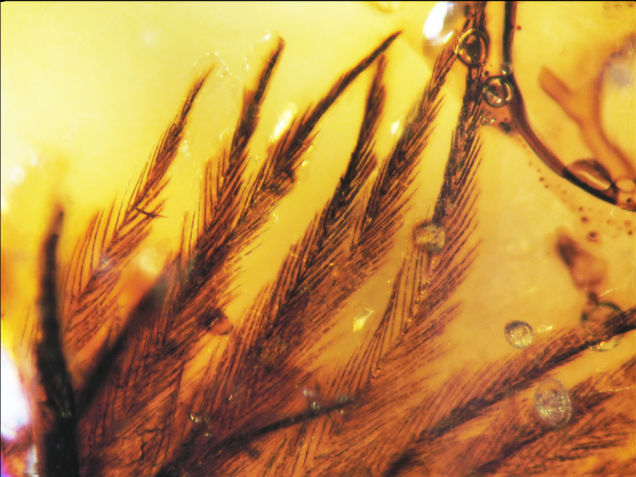