As I’m away, and my folder of readers’ photos is in Chicago, we’ll have only four pictures today, all of which were sent yesterday. Stephen Barnard in Idaho sent two pictures of a Swainson’s Hawk (Buteo swainsoni).

These hawks migrate all the way to Argentina. This is the first I’ve seen this season. 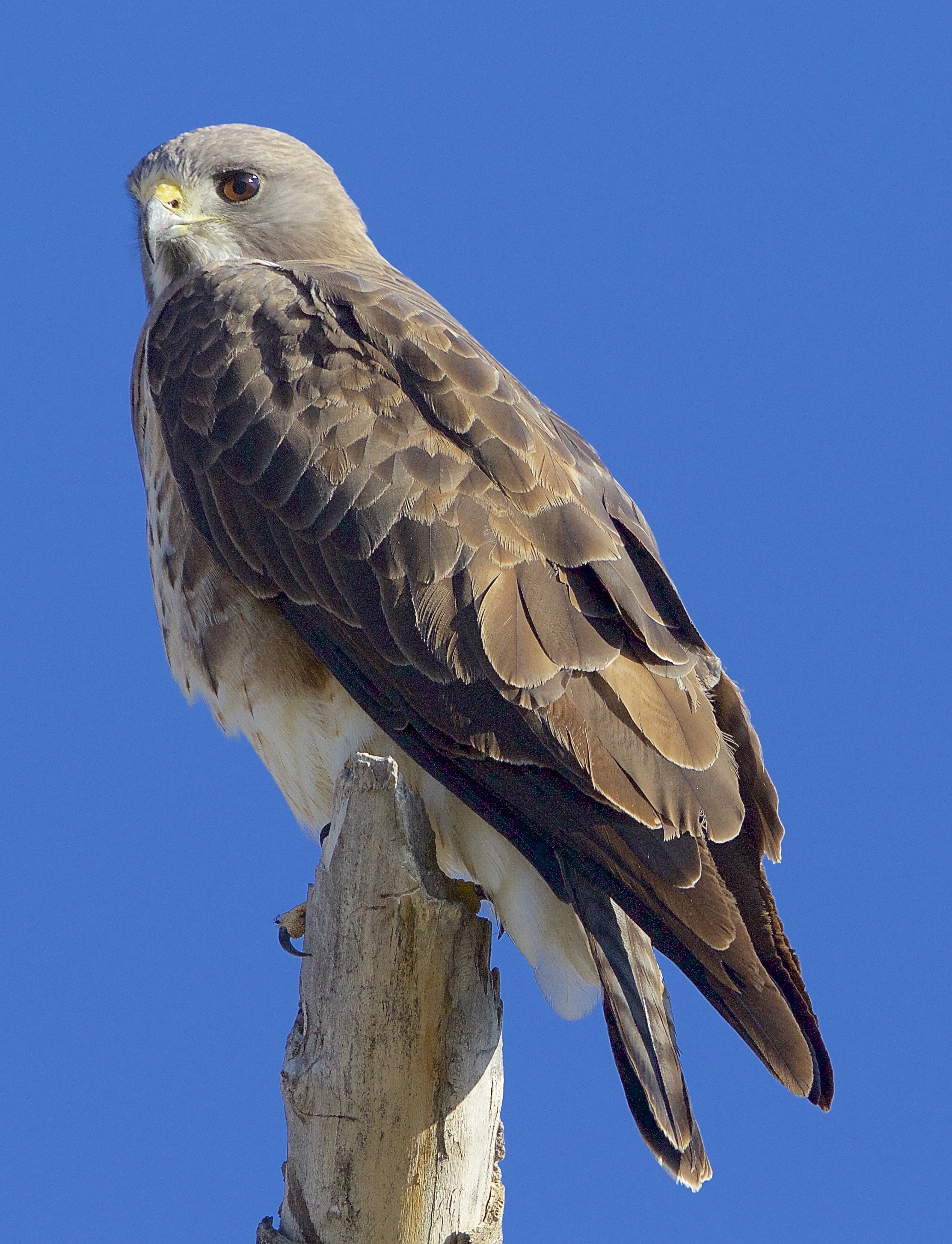 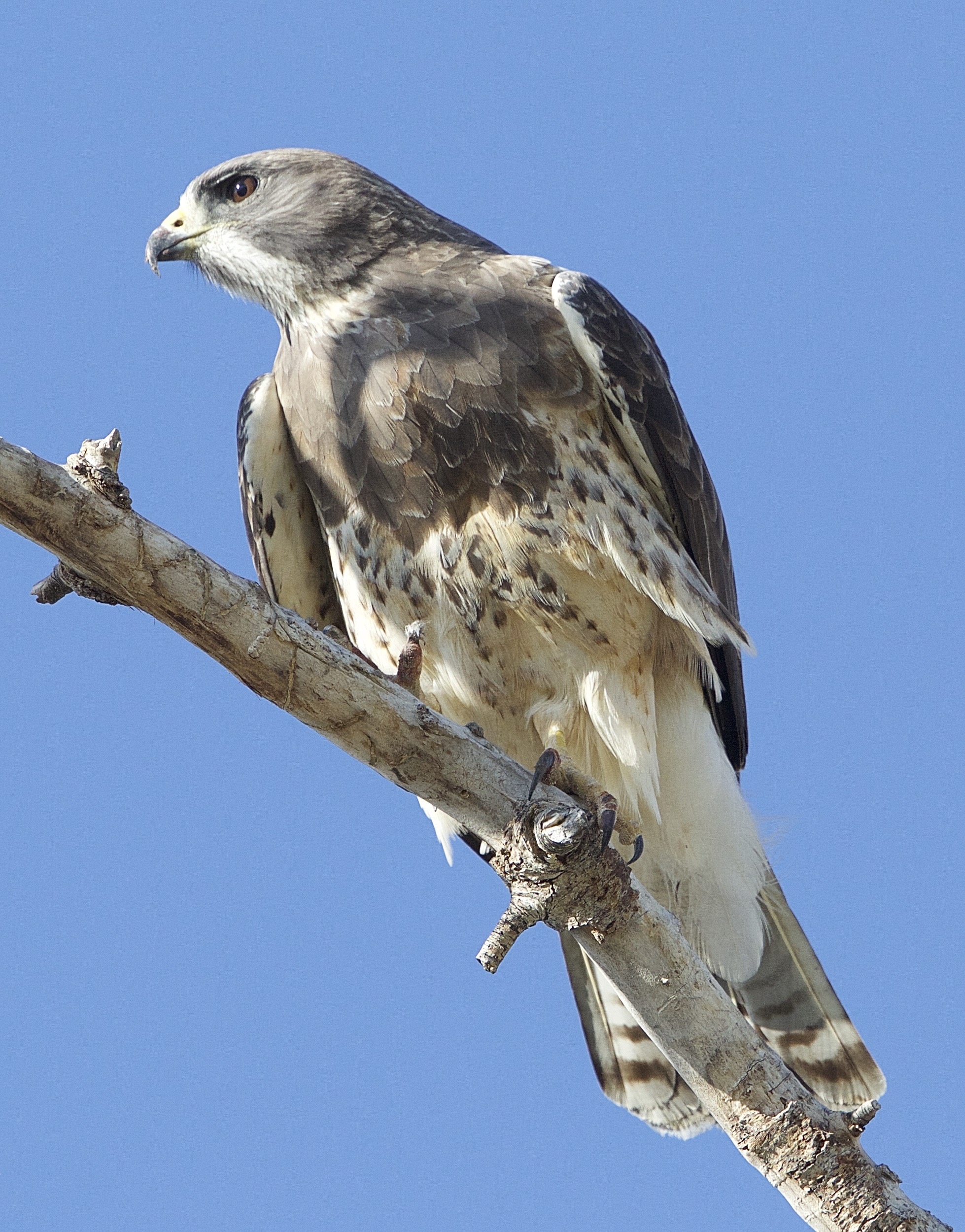 I don’t know much about raptors, but I wasn’t aware of any in North America who migrate this far. But, sure enough, here’s the range map from the Cornell site. And they do make that long journey:

And here’s some fun facts about the species, taken from Wikipedia:

This species was named after William Swainson, a British naturalist. It is colloquially known as the grasshopper hawk or locust hawk, as it is very fond of Acrididae (locusts and grasshoppers) and will voraciously eat these insects whenever they are available.

Their breeding habitat is prairie and dry grasslands in western North America. They build a stick nest in a tree or shrub or on a cliff edge. This species is a long-distance migrant, wintering in Argentina; it has been recorded as a vagrant in neighboring Chile, in the island countries of the Dominican Republic, and Trinidad and Tobago, and in Norway.

This species or its immediate predecessor is the ancestor of the Galápagos hawk, as demonstrated by recent research. The latter diverged from the mainland birds perhaps 300,000 years ago, a very short time in evolution.

The Galápagos hawk (Buteo galapagoensis) is a rare species (ca. 150 pairs) endemic to the archipelago. Given its geographic isolation, can we really say it’s a different species from the Swainson’s? (I’m adhering to the Biological Species Concept, which sees different species as populations that have genetically based traits that prevent them from producing fertile offspring.) I think so, as the migratory (and non-migratory) habits, which are probably genetically based, keep the species from meeting each other, and that is a form of either ecological or behavioral isolation. The species almost certainly resulted from one or more stray ancestors of the Swainson’s hawk that found their way to the archipelago several hundred thousand years ago. That’s plausible because, as you see above, individuals sometimes go far off course.

From John Harshman, who lives in the San Francisco Bay area:

From my back yard. First, a female (I think) Anna’s hummingbird (Calypte anna) coming in for a drink. I really like the feet. Second, a male rufous hummingbird (Selasphorus rufus) in mid-slurp. Both partaking from bottlebrush (Callistemon) flowers; I don’t know the species, but the genus is an Australian endemic. New camera (Panasonic FZ200). 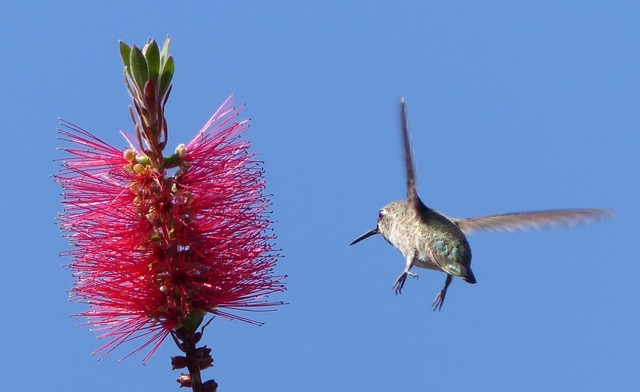 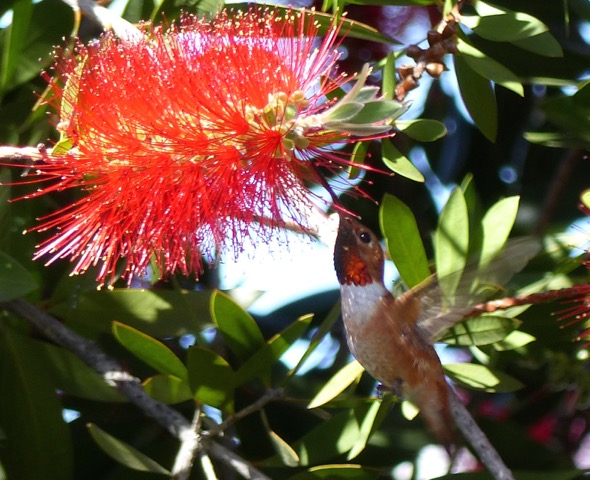