One week ago I noted that the Tennessee legislature was considering a bill to make the Bible the Official State Book. Here’s that bill: 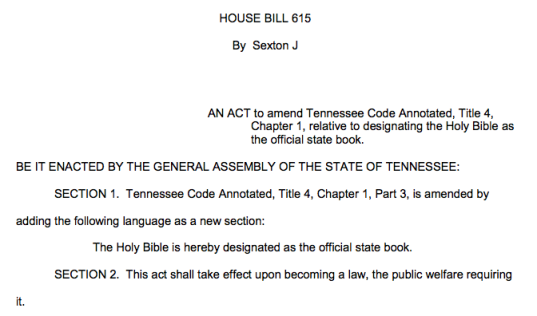 It’s sheer lunacy, of course, and unconstitutional to boot. But that’s never stopped Republicans before. And today, according to The Tennesseean site, the bill sailed through one branch of the legislature:

The Holy Bible is the official book of Tennessee in the view of the Tennessee House of Representatives.

Despite questions of constitutionality, lawmakers beat back an attempt to make Andrew Jackson’s Bible the official book and voted 55-38 in favor of Rep. Jerry Sexton’s original bill.

“History’s going to tell us where we stand on this. I’m grateful to have the opportunity to have the side that I’m on,” said Sexton, R-Bean Station, after the vote.

“It may be kind to me in the future and it may not be kind, and that’s OK. I made a decision for today and I feel good about it.”

Although a GOP-led effort, House Speaker Beth Harwell, R-Nashville, was one of 20 Republicans to vote against the measure. House Minority Leader Craig Fitzhugh, D-Ripley, and four Republicans abstained. Only six Democrats voted in favor of the bill.

Shame on those six Democrats! If you’re a Tennessean, find them and vote them out!

While the bill is also predicted to pass the Senate, bringing it to the Governor to sign into law, The Tennessean reports that Governor Bill Haslam has “concerns.” And well he should, for this is a sure ACLU or FFRF lawsuit for the state if the bill passes, and it will almost surely be declared unconstitutional, saddling the state with enormous court costs.

The bill is opposed by one Republican in the Senate—the majority leader, but look at his grounds for opposition (my emphasis)!:

Senate Majority Leader Mark Norris opposed the bill in committee, and he hopes the bill doesn’t pass when it’s considered by the Senate.

“I sure hope it won’t pass. I think it’ll be a dark day for Tennessee if it does,” Norris said.

“All I know is that I hear Satan snickering. He loves this kind of mischief. You just dumb the good book down far enough to make it whatever it takes to make it a state symbol, and you’re own your way to where he wants you.”

Seriously, are these people adults? In the future, I think, people will look back on this madness with the same feelings we have now when thinking about the torture and burning of witches in the Middle Ages.  How could they do such stuff?

Reader Eliott, who sent me this link, noted:

I guess the one silver lining to this is any time they waste on this obviously unconstitutional bill is time that can’t be spent passing abortion restrictions.

I think he’s underestimating the ability of Republicans to dismantle the Constitution in many ways simultaneously. They make more mischief than Satan!