There are two Doodles today, but only one is visible in the U.S.  This is the one celebrating the 155th anniversary of the Pony Express. If you’re not a Yank, you likely haven’t heard of it, but the story of the Express was taught to all schoolkids when I was a youngster.  The Pony Express was a horseback mail service connecting Sacramento, California with St. Joseph, Missouri: it was the fastest way to get letters across the U.S. before there was a railroad. Using the Express, one could get a letter from the East coast to Calif0rnia in only 10 days—not too much longer than it takes now!

Most Americans don’t realize, however, that the service was short-lived: only 18 months—from 1860-1861, until the Civil War brought it to a close. But it carries the romantic image of the Wild West, mainly because of the intrepid riders and the short-stage horse gallops needed to deliver mail rapidly. Wikipedia explains:

In 1860, there were about 157 Pony Express stations that were about 10 miles (16 km) apart along the Pony Express route.[6] This was roughly the distance a horse could travel at a gallop before tiring. At each station stop the express rider would change to a fresh horse, taking only the mail pouch called a mochila (from the Spanish for pouch or backpack) with him.

The employers stressed the importance of the pouch. They often said that, if it came to be, the horse and rider should perish before the mochila did. The mochila was thrown over the saddle and held in place by the weight of the rider sitting on it. Each corner had a cantina, or pocket. Bundles of mail were placed in these cantinas, which were padlocked for safety. The mochila could hold 20 pounds (9 kg) of mail along with the 20 pounds (9 kg) of material carried on the horse. Included in that 20 pounds (9 kg) were a water sack, a Bible, a horn for alerting the relay station master to prepare the next horse, and a revolver. Eventually, everything except one revolver and a water sack was removed, allowing for a total of 165 pounds (75 kg) on the horse’s back. Riders, who could not weigh over 125 pounds (57 kg), changed about every 75–100 miles (120–160 km), and rode day and night. In emergencies, a given rider might ride two stages back to back, over 20 hours on a quickly moving horse.

Here’s the Doodle, and it is also an animated game! You can move the rider’s horse up and down on the screen using the arrow keys, collecting letters along the way; the object is to get as many letters to St. Joe as you can. But beware of the cacti, where you could get badly hung up and lose all your mail! As one reader wrote me this morning:

Did you see [the Google Doodle] yet? It’s a game and some of my coworkers and I think we’ll get nothing done today. We have a lot of mail to deliver!

Click on the screenshot to see the Doodle and play the game—if you’re within the ambit of the Doodle (see below): 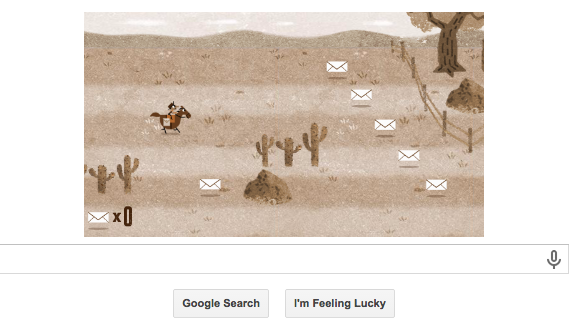 There’s even a YouTube video of how it was made, explained by Nate Swinehart, part of the animation team:

Below is an actual letter delivered by the Pony Express; it must be worth a fortune, as there were only 35,000 transported this way, and most were surely lost or discarded.  Note the Pony Express postmark.  It was expensive to send mail this way: the prices varied between $1 and $5 for a regular letter, and, for comparison, $1 in 1860 is the equivalent of $26 in 2013.  Wikipedia has a really nice article on the service, along with stories of some colorful and heroic riders, who risked being killed by Native Americans. 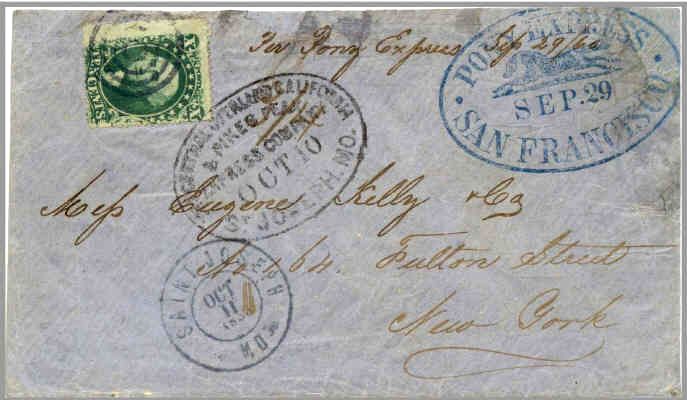 Here’s one of several U.S. commemorative stamps, this one from 1940: 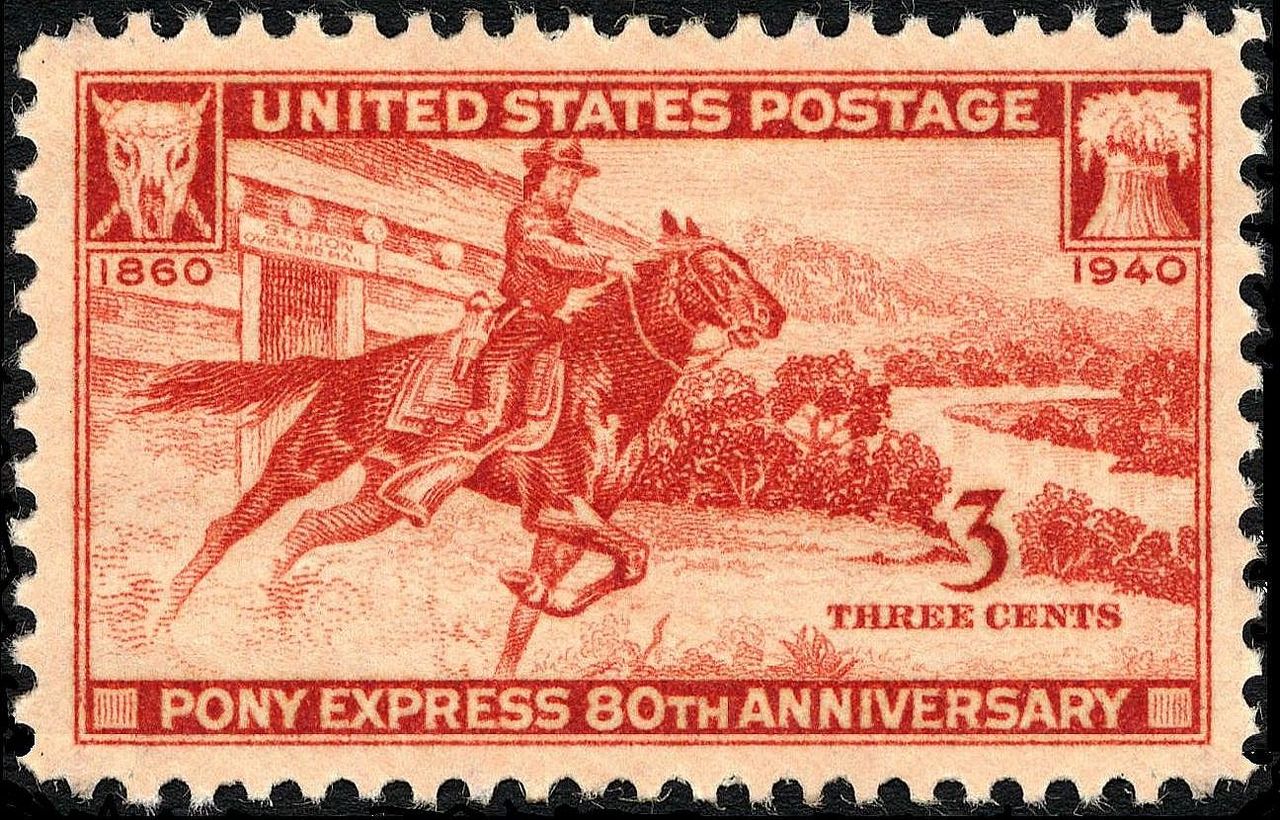 This Doodle is visible in only the following places: 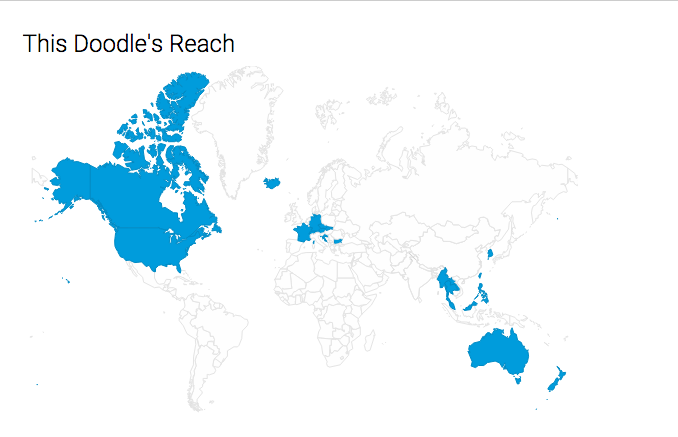 If you live in any of the countries below, you’ll see a different Doodle, one of an Indian hero/politician, B. R. Ambedkar. Had he lived, today would have been Ambedkar’s 124th birthday.  (The distribution of this Doodle is weird: I can understand India and the UK, but Ireland, Chile, Argentina, and Peru, as well as Sweden and Poland? Is Ambedkar well known in South America? 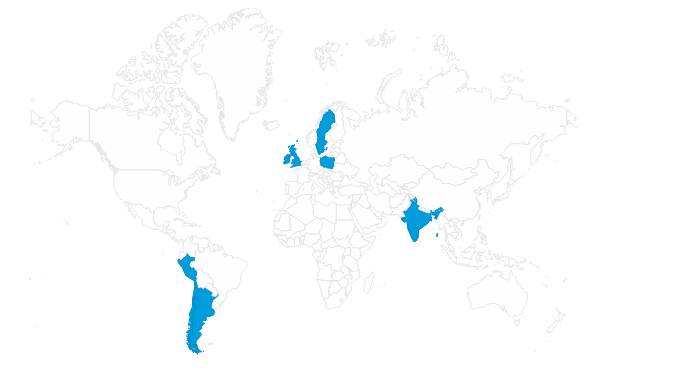 Regardless, Ambedkar (1891-1956) is known to me, for I’ve spent a lot of time in India, where he is a much admired figure and one of the most important politicians to create the Indian nation after it became independent in 1947.  Here’s his Doodle:

Ambedkar was the primary drafter of India’s constitution and its first Law Minister.  One of the reasons for his fame is that he worked his way up despite being born a dalit  (the term Indians now use for “untouchable”), which would normally have doomed him to a life of drudgery and discrimination. After being the only dalit in his primary school, he went on to get degrees from both Columbia University in the U.S. and the London School of Economics. During his tenure in government he worked tirelessly for the rights of dalits, and much of the “affirmative action” they receive today reflects his doings. Later in life Ambedkar became a Buddhist. Today he’s a national hero in India, a well deserved status, and one shown by the photo below:

39 thoughts on “Google Doodle celebrates the Pony Express in the U.S. and, in other places, B. R. Ambedkar”