In this week’s strip, the Divine Duo discuss the Islamic State. The artist also provides a link to an article on ISIS with the note:

Thanks to Mehdi Hasan for this week’s strip. 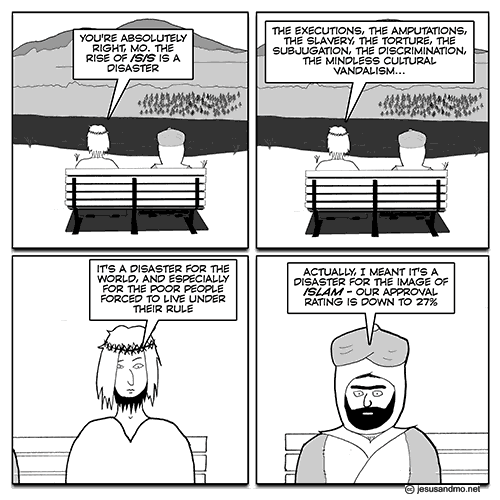 If you read Hasan’s long article in The New Statesman, “How Islamic is the Islamic State?“, you’ll see an apologist tying himself into knots trying to claim that the actions of ISIS have little to do with Islam. It’s a tedious exercise in cherry picking and confirmation bias, and ends this way:

To claim that Isis is Islamic is egregiously inaccurate and empirically unsustainable, not to mention insulting to the 1.6 billion non-violent adherents of Islam across the planet. Above all else, it is dangerous and self-defeating, as it provides Baghdadi and his minions with the propaganda prize and recruiting tool that they most crave.

A more cogent (and shorter) article is Tom Holland’s rebuttal of Hasan’s piece, also in The New Statesman, called “We must not deny the religious roots of the Islamic state.” An excerpt:

It is not merely coincidence that IS currently boasts a caliph, imposes quranically mandated taxes, topples idols, chops the hands off thieves, stones adulterers, exec­utes homosexuals and carries a flag that bears the Muslim declaration of faith. If Islamic State is indeed to be categorised as a phenomenon distinct from Islam, it urgently needs a manifest and impermeable firewall raised between them. At the moment, though, I fail to see it.