Instead of going to church today, we can have our special Alain de Botton-Approved Religion Substitute by worshiping at the church of Our Lady of Natural History. There is in fact a wonderful new discovery about frogs, one described in a new paper in the Zoological Journal of the Linnaean Society by Juan Guayasamin et al. (reference and free link below; there’s also a precis in LiveScience).

I can state the results concisely: the authors found a new species of frog in Ecuador that can dramatically change its body shape from spiky to smooth in a matter of only a few minutes.  They then found another species, somewhat but not extremely closely related to the first, that can do the same thing. This kind of change in morphology, induced by the environment, is called phenotypic plasticity. And its observation in the frogs suggests two conclusions:

1. A lot more frogs can do this than have been described, but you need special conditions to see it, so it’s been largely undescribed. Other abilities of amphibians to change shape or color within a short time may also have been missed.

2. Since new frog species are often identified by their appearance after having been collected and pickled in alcohol, there may be described species that are identical to species with other names, but were misidentified because frogs collected at different stages of shape-changing could be mistaken for two different species. This is especially problematic because a large proportion of new species in both invertebrates and vertebrates (18% and 19%, respectively) are described from only a single specimen.

The paper gives other information as well, including genetic data, a phylogenetic analysis of the genus showing how the two shape-shifting species are related,  other genetic information about differences between populations, and a description of the frog’s call and morphology, important for describing it as a new species. But those issues are of more professional interest and need not detain us.

In amphibians, most variation among individuals of a species is in color, but those differences are permanent (like hair and skin color in humans) and don’t change over time. Those traits that do change over time in amphibian species, like crests in newts or tubercules in frogs, change during the breeding season, usually in males as a way to attract mates, and then revert back after the season. They thus change seasonally rather than over just a few minutes, like the frog described in this paper. The rapidity of change in the species is thus novel.

The new species, Pristimantis mutabilis (note the species name!), was first spotted in 2006 in the cloud forests of the Ecuadorian Andes, but its ability to change shape wasn’t detected until three years later. Under normal conditions the frog is spiky, with tubercules and points, but it changes when they’re picked up. As the authors describe in the paper:

All individuals of Prismantis mutabilis presented a markedly tubercular skin texture when found on vegetation or hidden in moss during the night. Large tubercles were evident on the dorsum, upper and lower lips, upper eyelid, arms and legs. After frogs were captured, they all showed a sudden and drastic change in skin texture; all tubercles became reduced in size, and the dorsal skin became smooth or nearly smooth (i.e., few tubercles are visible, mainly on the upper eyelid and heel). When frogs were returned to mossy, wet en- vironments, they recovered a tuberculate skin texture. We speculate that explanatory variables involved in frog skin texture change are stress, humidity, and back-ground. Our observations do not support light availability as a source of texture variation as we observed skin texture change at day and night. The time rate of skin texture variation might depend on the variables mentioned above; we only have one quantitative measure, which is summarized in Figure 2.

Here’s Figure 2: As you can see, the spiky frogs become relatively smooth within five minutes after capture. It’s not yet clear what physiological/biochemical systems are involved in this dramatic change: 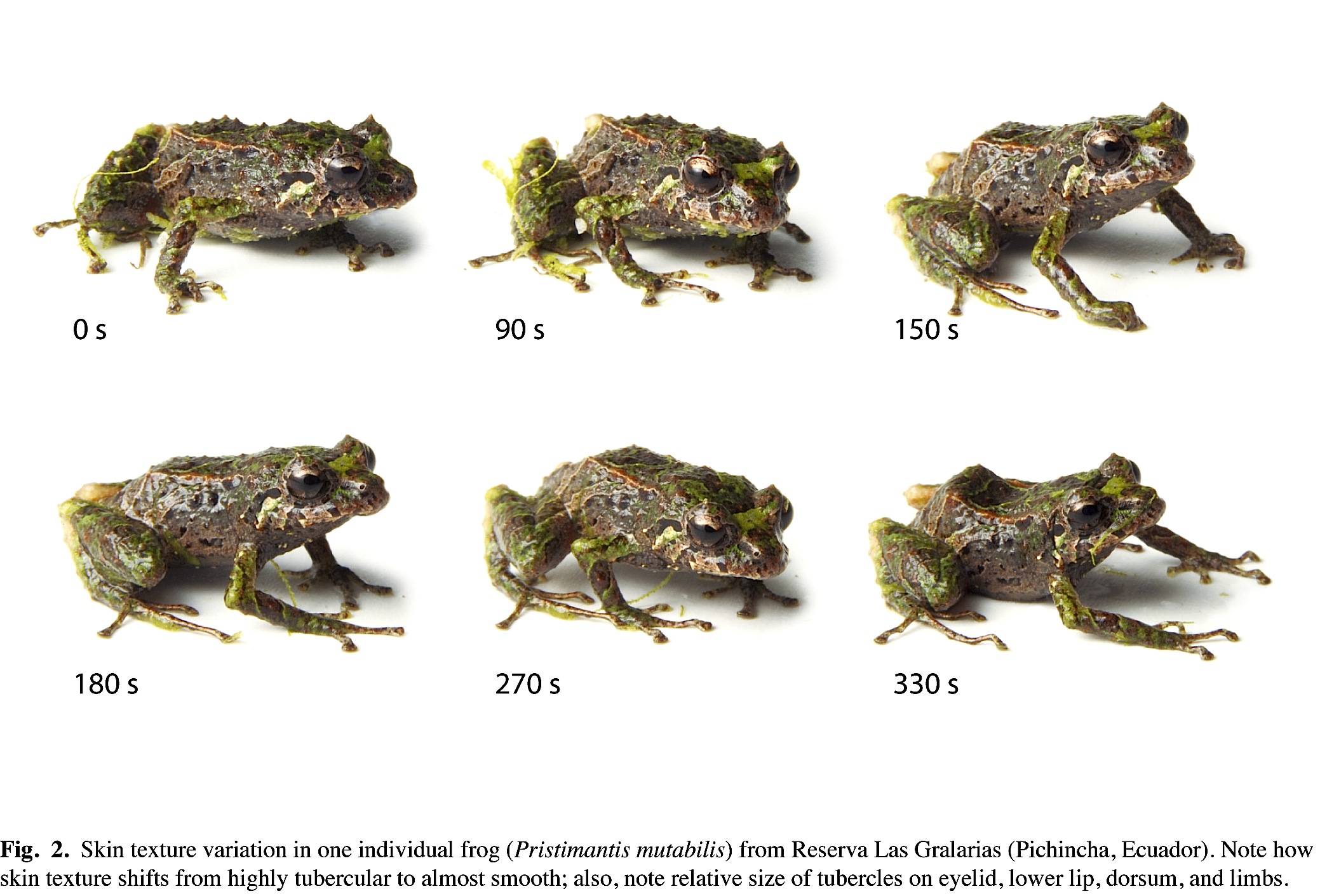 In this photo, from Figure 3, a sub-adult male is first photographed in its natural habitat (A) and then in the laboratory (B). You can see the change very clearly:

And here’s one more with the caption from the paper. These are small frogs, ranging in snout-vent length between 17 and 23 mm (0.7-0.9 inches): 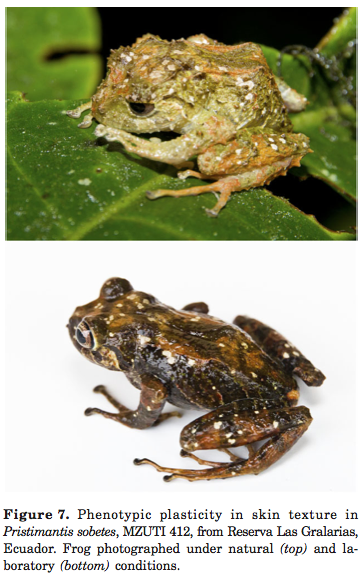 The authors also identified another species that does the same thing: a congener (frog in the same genus) named Prismantes sobetes. Since the two shape-shifting species are not closely related—a phylogeny shows many other species are more closely related to either than the two are to each other—either the ability to change body texture has evolved twice, or it’s present in some of the intervening species since it evolved in a common ancestor, or it is the remnant of a feature in their common ancestor that has been lost in all other species in the group. Since we don’t know about the abilities of those other species to shape-shift, more work is needed to distinguish among these explanations.

This leaves one big question: Why on earth do the frogs do this? Let’s assume as a working hypothesis that the shape change is an evolved one, and that individuals that could change shape had a selective advantage in the ancestral lineage. (It’s also possible that this is simply a nonadaptive physiological response to stress.) The authors suggest, probably correctly, that the tubercles and spiky appearance help camouflage the frog in the cloud forest, where it often sits among moss, vegetation, and epiphytes (plants growing on other plants); and they also raise one possibility for how they change their shape:

We suggest that skin plasticity is associated with environmental camouflage rather than sexual selection or dimorphism. Pristimantis mutabilis and P. sobetes are geographically distributed in montane cloud forest habitats that are abundant in epiphytes, vegetation, and moss. In these habitats, skin texture that has the appearance of moss or detritus likely conceals the individual from visual predators, such as birds and arachnids. While the physiological mechanisms of how texture changes in such a short time are unknown, we speculate that it could involve allocation of more or less water to existing small structures (e.g. warts and tubercles) on the skin.

But what’s missing here is an explanation for the change itself, which I can’t find in the paper. That is, why do they change from the presumably camouflaged shape to a smooth shape? And here I, who have no knowledge about amphibians, come up short. Perhaps being smooth helps you escape from predators if you’re caught, or helps the frogs jump better.  Experiments (some of them involving predation!) could help settle this.  I suspect some readers who know more about frogs than I (I’m looking at you, Lou Jost) can suggest evolutionary reasons why shape-shifting may be adaptive.  Please give your suggestions in the comments.

28 thoughts on “A new and bizarre shape-shifting frog”