A few hours ago I wrote about Indiana’s odious new “Religious Freedom Restoration bill,” which allows people virtually any form of discrimination so long as it has a religious justification. Gays, of course, are the bill’s main target.

Reader Amy then sent me a photo of the bill’s signing ceremony, a ceremony largely kept secret. Because the photo was so bizarre, I wanted independent confirmation that this was a real photo instead of a PhotoShop job. And I found it: the photo was posted on LGBTQ Nation’s site, credited to the “Indiana governor’s office.”

You can see why I was skeptical: 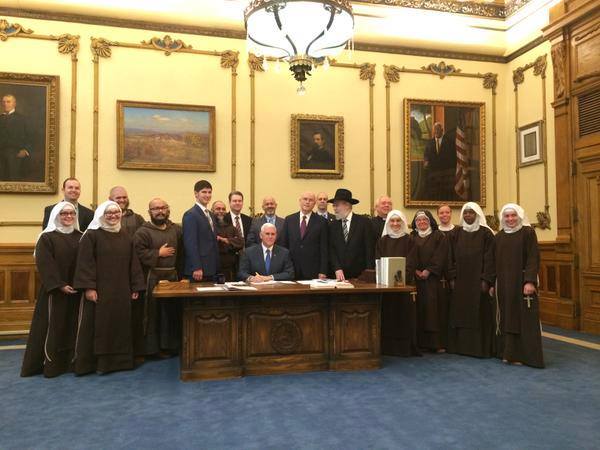 Yes, we see not only Republican (of course) governor Mike Pence signing the bill, but all the people around him who were invited to watch—presumably those who favor such discrimination. Oy gewalt!! (That goes especially for you, rabbi!)

You can read the bill here, and there’s a video on rtv6, the local ABC news channel, that also shows the picture.  Indiana now joins 19 other states in legalizing discrimination. The video also shows Pence frantically justifying his decision.