I’m very pleased to see that the price of the autographed and Houle-illuminated copy of WEIT has gone even higher: it’s over $4K, and there’s still a week to go: 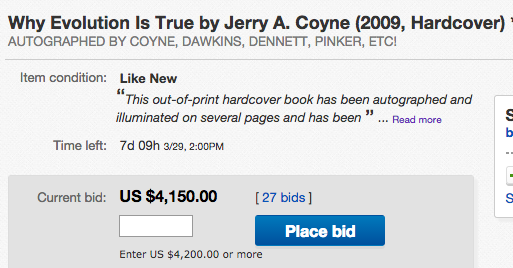 Meanwhile, over at Sean Carroll’s site, Preposterous Universe, various sourpusses (sourpodes?) predicted it wouldn’t sell for much: as one of them said, “I’m going to be straight honest as any respecting person in pursuit of scientific truth should be: the book signed by all these people is not worth $60 and never will be. Dawkins is a science populizer more than a scientist. Dennett is a Philosopher. Weinberg is the heavyweight on that list. But not going to ever be worth 2k.”

But book is worth precisely what it sells for, and, as reader Ben Goren asked another sourpuss, “What kind of sauce would you like with your crow?”

Another questioned whether Doctors without Borders was “efficent financially.” I of course vetted that long ago, and the organization is very highly rated (see the Charity Navigator evaluation here). 87% of its expenses go for programs and services. So get your rich friends to bid, for it’s identical to a big donation to DwB, and you get a nice book. I’m truly glad I don’t have Carroll’s trollish commenters on my site.

As for yesterday’s “Guess the Apologist” contest, I guess it wasn’t so hard after all.  The first quote was from Karen Armstrong, the second from Reza Aslan. The links at their names lead you to the places where I found the quotes. I thought the contest would be harder, but I guess the nature and style of these people’s thoughts are pretty distinctive.