I’ve criticized Damon Linker’s atheist-bashing before (see here), but in today’s New York Times he shows that he’s an equal-opportunity basher. In the Sunday Book Review, Linker evaluates, favorably, a new book by investigative reporter Gerald Posner, God’s Bankers: A History of Money and Power at the Vatican. Posner’s book, which came out Feb. 3, is doing well: it was a New York Times bestseller, is now #54 on Amazon, and today ranks #1 in the categories of “Catholicism” and “Christian denominations and sects.” Bill Donohue will be furious! 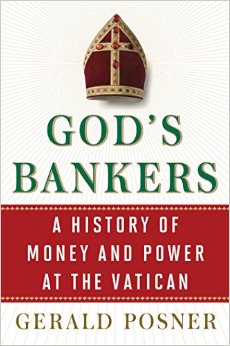 Posner’s book is about the shady banking practices of the Vatican, some of them apparently involving offshore stashing of dough, deep corruption, association with the Mafia, and perhaps even murder. We know about the religious evils of Catholicism, but this book shines a light on a whole new realm of Vatican malfeasance. Here are a few excerpts from Linker’s review:

That the Vatican has a bank at all is surprising when taking in the long view of church history. During the Middle Ages, the papacy developed into an aristocratic and feudal institution dependent for much of its income on rents and taxes collected in the Papal States of central Italy. This came to an abrupt end with the final unification of Italy in 1870, which deprived the church of its lands and feudal income, leading to several decades of acute financial insecurity.

Popes of this period — Pius IX, Leo XIII, Pius X, Benedict XV, Pius XI — publicly denounced lending money at interest (usury) while at the same time accepting massive loans from the Rothschilds and making their own interest-bearing loans to Italian Catholics. Beginning with ­Bernardino Nogara, appointed by Pius XI in 1929, the church also empowered a series of often shady financial advisers to engage in financial wheeling and dealing around the globe. “So long as the balance sheets showed surpluses,” Posner writes, “Pius and his chief advisers were pleased.” That pattern would continue through the rest of the 20th century.

. . . Posner weaves an extraordinarily intricate tale of intrigue, ­corruption and organized criminality — much of it familiar to journalists who cover the ­Vatican, though not widely known among more casual church watchers — from Pius XII down to Benedict XVI. These were years when the Vatican moved beyond the last vestiges of feudal restraint to become “a savvy international holding company with its own central bank” and a “maze of offshore holding companies” that were used as sprawling money-laundering ­operations for the Mafia and lucrative slush funds for Italian politicians.

Posner’s gifts as a reporter and story­teller are most vividly displayed in a series of lurid chapters on the ­American ­archbishop Paul Marcinkus, the arch-Machiavellian who ran the Vatican Bank from 1971 to 1989. Notorious for ­declaring that “you can’t run the church on Hail Marys,” ­Marcinkus ended up ­implicated in several sensational scandals. The biggest by far was the collapse of Italy’s largest private bank, Banco ­Ambrosiano, in 1982 — an event ­preceded by mob hits on a string of investigators looking into corruption in the Italian banking industry and followed by the spectacular (and still unsolved) murder of Ambrosiano’s ­chairman ­Roberto Calvi, who was found hanging from scaffolding beneath Blackfriars Bridge in London shortly after news of the bank’s implosion began to break. (Although the Vatican Bank was eventually absolved of legal culpability in Ambrosiano’s collapse, it did concede “moral involvement” and agreed to pay its creditors the enormous sum of $244 million.)

In one of his biggest scoops, ­Posner ­reveals that while Marcinkus was ­running his shell game at the Vatican Bank, he also served as a spy for the State Department, providing the American ­government with “personal details” about John Paul II, and even encouraging the pope “at the behest of embassy officials . . . to publicly endorse American positions on a broad range of political issues, ­including: the war on drugs; the ­guerrilla fighting in El Salvador; bigger defense budgets; the Soviet invasion of Afghanistan; and even Reagan’s ambitious ­missile defense shield.”

The cumulative effect of Posner’s detective work is an acute sensation of disgust — along with a mix of admiration for and skepticism about Pope Francis’ efforts to reform the Vatican Bank and its curial enablers.

63 thoughts on ““God’s Bankers”: a new book exposing the corruption of the Vatican bank”