Today’s Jesus and Mo deals with the Islamic Human Rights Commission’s (IHRC’s) odious award of the 2015 “Islamophobe of the Year” title to Charlie Hebdo (see also the critical Spectator piece by Douglas Murray). 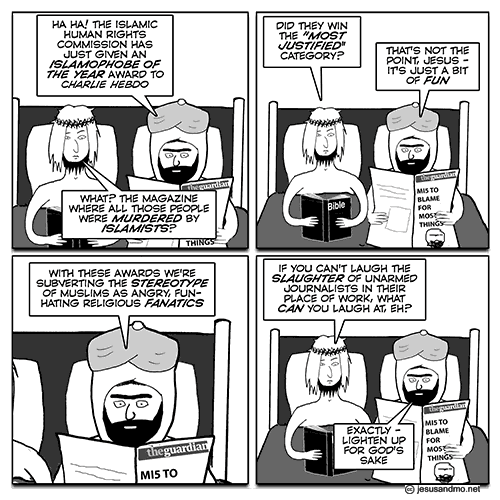 And indeed, as Mo notes, these awards are presented in a pretty lighthearted and humorous manner. Below is a video of the IHRC’s presentation of last year’s “Islamophobe of the Year” award to Barack Obama.  Really funny, isn’t it? I haven’t seen the video for the Charlie Hebdo award, but if they used humor to mock the slaughter of the magazine’s staff, I spit on the IHRC.

And here’s a paragraph from Murray’s piece:

But there is another reason why my laughter is lessened this year. Although I am assured that the laughter at the IHRC’s ‘ceremony’ in London on Saturday was as raucous as ever, this weekend the IHRC gave their international ‘Islamophobe of the Year’ award to the left-wing French satirical magazineCharlie Hebdo.  This might be thought laughable in any other circumstances.  The IHRC, one should remember, is a registered British charity.  But of course it is not very funny, because only two months ago another group of people who thought Charlie Hebdo is ‘Islamophobic’ went into the magazine’s offices and gunned down their journalists and cartoonists.  This is the way the pattern works now – the Islamic terrorists break through the front door with Kalashnikovs and then a whole network of fellow travellers try to sneak in through the back door and explain why the cartoonists and journalists might have had it coming.