A week ago I posted about a vile incident at the University of California at Los Angeles (UCLA), in which Rachel Beyda, a Jewish sophomore student who was up for membership of the student council’s judicial board, was interrogated and initially rejected solely because she was a member of Jewish organizations, which supposedly conferred on her a lack of “objectivity” and “divided loyalties.”

There’s a short video of the council’s interrogation and deliberation here, and a longer one below, which you can watch if you want (it’s 44 minutes long). The initial vote that rejected Beyda—by a vote of 4-4-1—takes place at 16:10. The faculty advisor then weighs in at about 34:19, admonishing the students that being Jewish does not constitute a “conflict of interest.” The second vote, in which the council finally approved Beyda unanimously, takes place at 43:40.

Can you imagine a member of any other minority group who would receive this kind of treatment in a liberal American university? Even a Muslim—a member of a group said to be a target of “Islamophobia”—would never be interrogated this way. Can you imagine a student group rejecting a Muslim because she had “divided loyalties,” or a black student because she “was black, belonged to black student groups and thus had ‘divided loyalties’? Only Jews receive this kind of treatment by students—and it’s because of the overweening hatred of Israel (which devolves upon Jewish students) among many college students.

Until recently, anti-Semitism on campus was not much discussed, even though in America hate crimes against Jews are 5-6 times more frequent than against Muslims (twofold if you weight the data by population size), and they occur fairly often on campus. There are two reasons. First, people have the impression that anti-Semitism simply isn’t a going view in the U.S., and so ignore it. Second, anti-Semitism is now folded into a more socially acceptable view: anti-Zionism. But not all Jews are unthinking adherents to Israel’s policies: many Jews in the U.S. are critical of some of Israel’s doings (I’m one of these), and, regardless, you shouldn’t hold all Jewish students responsible for things that Israel does. If some Jewish students agree with Israel’s actions, and you want to disagree with those views, by all means do so; but don’t discriminate against people like Beyda simply because they’re Jewish. What we see in the above meeting is simply anti-Semitism (Israel isn’t even mentioned!), although the bigots, as usual, deny their bigotry.

At any rate, the New York Times published a front-page article on this incident yesterday, “In UCLA debate over Jewish student, echoes on campus of old biases.” It’s remarkable to me how restrained (but firm) the reaction of Jewish people was:

The president of the student council, Avinoam Baral, who had nominated Ms. Beyda, appeared stunned at the turn the questioning took at the session and sought at first to rule Ms. Roth’s question out of order. “I don’t feel that’s an appropriate question,” he said.

In an interview, Mr. Baral, who is Jewish, said he “related personally to what Rachel was going through.”

“It’s very problematic to me that students would feel that it was appropriate to ask that kind of questions, especially given the long cultural history of Jews,” he said. “We’ve been questioned all of our history: Are Jews loyal citizens? Don’t they have divided loyalties? All of these anti-Semitic tropes.”

. . . The session — a complete recording of which has been removed from YouTube [JAC: it’s back, and I posted it above] — has served to spotlight what appears to be a surge of hostile sentiment directed against Jews at many campuses in the country, often a byproduct of animosity toward the policies of Israel. This is one of many campuses where the student council passed, on a second try and after fierce debate, a resolution supporting the Boycotts, Divestment and Sanctions movement aimed at pressuring Israel.

“We don’t like to wave the flag of anti-Semitism, but this is different,” Rabbi Aaron Lerner, the incoming executive director of the Hillel chapter at U.C.L.A., said of the vote against Ms. Beyda. “This is bigotry. This is discriminating against someone because of their identity.”

Indeed it is. As I said, Israel wasn’t even mentioned! But Beyda took the high road:

Ms. Beyda, 20, who is from Cupertino and is president-elect of the Jewish sorority Sigma Alpha Epsilon Pi, said she did not want to comment on her confirmation hearing because of her role on the Judicial Board, whose duties include hearing challenges to the constitutionality of actions of the council.

“As a member of the Judicial Board, I do not feel it is appropriate for me to comment on the actions of U.C.L.A.’s elected student government,” she said by email.

Fortunately, the chancellor of UCLA stood up for Beyda:

The university’s chancellor, Gene D. Block, issued a statement denouncing the attacks on Ms. Beyda. “To assume that every member of a group can’t be impartial or is motivated by hatred is intellectually and morally unacceptable,” he said. “When hurtful stereotypes — of any group — are wielded to delegitimize others, we are all debased.”

In an interview on Thursday, Chancellor Block said he viewed this as “a teaching moment. These are students that are learning about governance. I think they all learned about what’s appropriate and what’s not appropriate. The campus has come together on this.”

Well, that assessment might be a bit optimistic. Although the four students who initially voted against Beyda wrote a letter of apology to the UCLA student newspaper, the Daily Bruin, have a look at it: 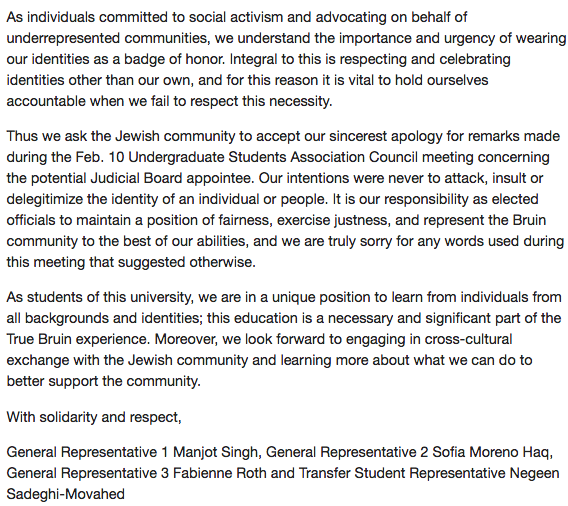 Maybe I’m being uncharitable here, but this sounds largely like a notapology. The classic notapology trope—”we are truly sorry for any words used during this meeting that suggested otherwise”—seems to put some blame on the interpreter for construing what the signers’ words “suggested.” Further, as Steve Lubet, a law professor at Northwestern University wrote on the academic-issues discussion website The Faculty Lounge:

Our intentions were never to attack, insult or delegitimize the identity of an individual or people. It is our responsibility as elected officials to maintain a position of fairness, exercise justness, and represent the Bruin community to the best of our abilities, and we are truly sorry for any words used during this meeting that suggested otherwise.

Really?  What exactly were their intentions when they challenged Rachel’s impartiality, solely because she is Jewish?  And what alternative “words used during this meeting” could possibly have made it any better?  The problem was not the language of their questioning, but rather the sentiment behind it.

Undergraduates need to be forgiven for their mistakes, but they also need to learn from them.  In this case, the four objectors seem to have learned very little, as they appear to be completely blind to their own implicit expression of anti-Semitism, even after it has been pointed out to them.

Indeed: no Muslim, Mormon, gay, or black student would have been challenged about their “objectivity”. That issue is reserved for Jews.

Bigotry of any sort is unacceptable, and we (and the students above) need to learn the difference between discriminating against someone solely because of their background, ethnicity, or sexuality on the one hand, and challenging their beliefs or actions on the other.

51 thoughts on “Fallout from student anti-semitism at UCLA”