I’ve just finished reading the recently-published collection of short essays edited by Gregg Caruso, Science and Religion: 5 Questions. Caruso posed the same five questions to 33 theologians, scientists, philosophers, and others who have worked on or written about the relationship of science and religion. Here are the five questions:

When this book appeared after I’d already finished The Albatross, I was a bit upset, as I thought it would have been a good resource to inform my arguments about the incompatibility of science and religion. It turned out, though, that I’d already read most of the contributors’ thoughts on this, and so I didn’t learn much that was new. But for those of you who haven’t spent several years reading deeply about science and religion, the book is a valuable resource to begin investigating this very live controversy.

As I said, if you’ve read these people’s works you won’t be very surprised at their answers. What did surprise me, however, were two things. First, the relative lengths of the contributions of theologians versus everybody else. Theologians like Polkinghorne, Haught, and van Inwagen would often write ten pages of answers, dilating at length on their views about theology and science (especially the former), while the contributions of scientists and philosophers seemed on average shorter (I haven’t done the statistics). The philosopher of mind John Searle, for instance, wrote only a page and a half, answering each question in three to seven lines. In other words, the theologians were more full of hot air.

Second, the answer to question number 3—whether science and religion occupy distinct magisteria—was almost uniformly “no.” In other words, nobody is buying Gould’s hypothesis. While some of the answers are qualified, I can’t name anyone offhand who agreed with Gould’s thesis. (I myself have rejected it in two longer pieces—here and here—though I don’t have a piece in this volume.)

And the reason is heartening, at least to me. One of the main theses in The Albatross is that the incompatibility of science and religion rests on their competition to understand the universe, and on the inability of religion’s methodology to achieve any understanding. That thesis, in turn, depends on the supposition that religion makes truth claims, and is not just about sociality, morality, or nebulous and indescribable Grounds of Being. Now anyone with the slightest acquaintance of religion as it’s practiced by most believers knows that this is true—religions do make truth claims, often many of them. Christianity, for example, is grounded on the claims that Jesus was the son of God (or was part of God), came to Earth, and was crucified and resurrected for our sins. Those are claims about the existence of God, of a historical Jesus and what happened to him, and about our existence beyond death.

Any honest theologian knows that. Even though he or she might reject the very notion of religious truth claims, they surely know that most believers’ faith indeed rests on such claims. If people knew for sure that Jesus was a pure fiction, and didn’t get crucified and wasn’t resurrected, how many people would be Christians?

Many theologians answer “no” to question 3 precisely because they realize that Gould’s claim of nonoverlap—part of which said that science embraced questions about the natural world, and religion only about meaning and morals—wasn’t true. Religion, they say, does make claims about the natural world (let’s not quibble about “supernatural” versus “natural” here; we can simply say that both science and the Abrahamic religions make claims about about reality—about what exists).

Here, for example, is part of theologian Peter van Inwagen’s answer to that question about NOMA:

. . . I don’t think that, taken as a whole, the “non-overlapping magisteria” view is acceptable. My reason for saying this is not profound; it consists simply of a recognition of the fact that most religions—mine included—incorporate doctrines that pertain to matters other than morals and the way we should live our lives and the meaning of those lives. Here is one example that I have already touched on: if the steady-state cosmology had turned out to be strongly supported by the cosmological evidence, that support would have raised an important obstacle to my belief in the Christian doctrine of creation.

So there you have it: religious claims are subject to adjudication by evidence. Presumably van Inwagen sees a steady-state Universe as refuting the idea that God created the universe, so it had a beginning. But I think he’s misunderstanding the steady-state universe here, since, as far as I know, that obsolete theory proposed that the universe did have a beginning, and is still expanding, but that new matter comes into being as the universe expands, so it always looks the same everywhere. [Correction: See note below when I vetted this to our Official Website physicist.]

Regardless, why doesn’t the doctrine of evolution “raise an important obstacle” to van Inwagen’s belief in creation? I suspect he’d answer that God created through the process of evolution.  Well, why couldn’t God make a steady-state universe, then? After all, even the steady-state universe, I think,  is supposed to have had a beginning. But at any rate, the near-unanimity of theologians who reject NOMA in this book do so on the grounds that religion does indeed make claims about reality. 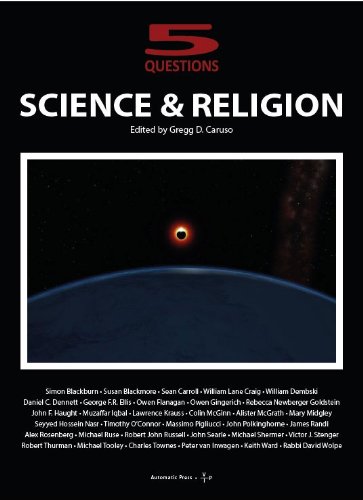 Update: I’ve asked the Official Website Physicist™ Sean Carroll about the nature of the steady-state universe, and van Ingwagen’s theological take on it, and he’s responded as follows:

I’m not an expert on different varieties of steady-state universes. Certainly the traditional understanding is that they don’t have a beginning — that overall they look the same at every moment in time (thus the name). But I can’t promise that someone hasn’t attached the name “steady-state” to some unusual model with a beginning. (Steady state is very different from “inflationary,” which is a type of universe that often does have a beginning.)

Also, I see no problem whatsoever for a clever Christian theologian to reconcile a beginningless universe with traditional theology. (“You didn’t think we meant that God created the universe with some literal first moment of time, did you? How charmingly non-sophisticated you are!”)

55 thoughts on “A new book on science and religion”