I’ve received a ton of email from readers alerting me to various pieces about the murder of the three young people, all Muslims, in Chapel Hill, North Carolina. Their names: Deah Shaddy Barakat, 23; Barakat’s wife Yusor Mohammad Abu-Salha, 21; and Abu-Salha’s sister Razan, 19.  The implication is that I should say something about the killings, as they were apparently committed by an atheist, and that we have to somehow exculpate ourselves, or explain ourselves, or indict that aspect of the atheist “movement” that is responsible for what many see as a hate crime.

I can do none of these things, for there is simply not enough information about what happened, about the killer’s motivations, about whether he had an animus towards Muslims that was somehow inspired by atheism, or whether it was one of those frequent spur-of-the-moment killings that occur over minor altercations.

Instead, I look at photos like this, of Yusor dancing with her father at her wedding, and it brings me to tears: 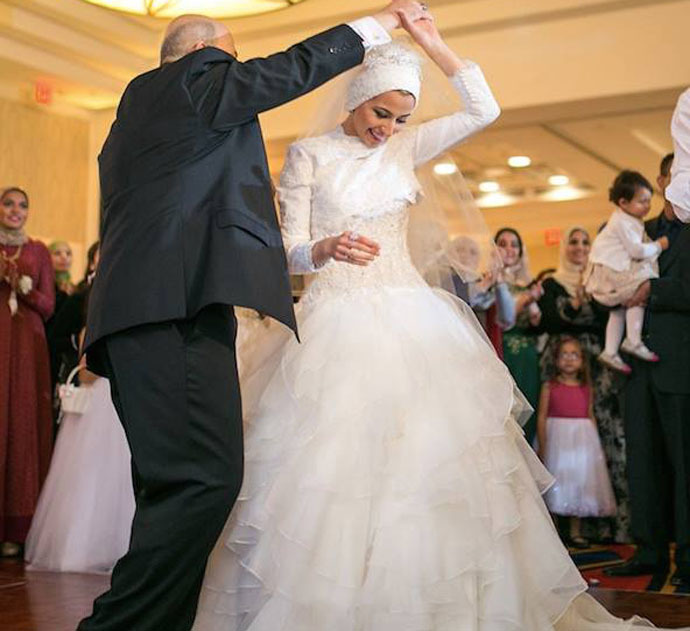 Likewise with this vigil held Wednesday at the University of North Carolina at Chapel Hill:

What we have are three young people, all with aspirations to help others, cut down in the full flood of their young lives. It would be an understatement to say that this is tragic. Their friends and relatives will carry this with them forever, and always think “What would they have become had they not been killed?”

Why did it happen? We don’t know. Now isn’t the time to speculate about that, as an investigation is under way. After such tragedies, the press (and bloggers) often begin to echo rumors about motivations, rumors that often turn out to be wrong. After the Columbine shootings, for example, goth culture, Marilyn Manson, and bullying were endlessly masticated by the pundits as possible contributions to the shooting—yet all of these connections proved to be bogus.

So it’s simply premature and inappropriate to begin pointing fingers, and using these murders as some kind of springboard to advance one’s ideological or political or religious agenda. And yet that is what I see.

You’ll all know about the religionists who are pinning this on atheism. That is expected. What bothers me even more is to see fellow unbelievers pinning this on atheism as well. There are those who say that this proves that no atheists have infused the “movement” (if there is a movement) with the proper degree of empathy towards the downtrodden, as if Paul Kurtz hadn’t spent his life doing that. We see those vile opportunists who, with an animus against the best-known New Atheists, implying that who really pulled the trigger was not Craig Stephen Hicks, but Richard Dawkins or Sam Harris or Lawrence Krauss, who supposedly created the climate (and the writings) that led to this murder.

We are operating in complete ignorance, as the killer’s motivations are unclear. It makes me sick to see these young people, who had family and relatives who loved them, turned into a tool to leverage various social agendas. One of the most cringeworthy responses was this tw**t by Reza Aslan after Richard Dawkins condemned the murders: 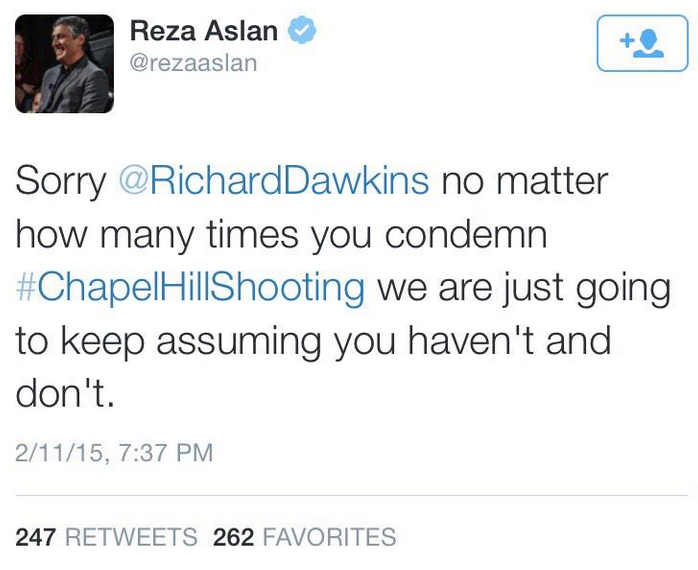 Please, can’t we behave like adults instead of narcissistic, grasping opportunists? And that goes for everyone. We don’t know what happened and so we should just shut the hell up until we do know.  I, for one, am fully prepared to learn that the murderer was indeed inspired by the writings of atheists and his hatred of Muslims—true Islamophobia. We may eventually find this to be the case. And if it hasn’t happened this time, it will—for atheism is no guarantee of high morals. Atheism, after all, is not a moral code or a recipe for the good life or a political philosophy, but simply an absence of belief in the supernatural. I can’t see apologizing for that absence of belief.

If and when we find that this is a case of atheist-inspired, Islamophobic terrorism, then that will be the time to see if there really is an endemic problem to address, or if this is simply a one-off thing with no implications for how atheists might rethink their actions.

But right now is the time to show sympathy for the victims and their families. It is unseemly and reprehensible to give lip service to this tragedy and then spend many words of analysis arguing about who was responsible and how we have to fix “atheism” to ensure that this doesn’t happen again.

That’s all I have to say.

225 thoughts on “The Chapel Hill murders”