I am so glad that biologist Piotr Naskrecki gave me permission to post up his copyrighted photos without asking permission, because he takes some great pictures, and always tells us about the relevant biology. I’ve featured his work several times before (see this post on the cat mantis, for instance), but he just posted a picture on Facebook that stopped me in my tracks. It’s the praying mantis Idolomorpha dentifrons, and is featured in a post from August, 2013 on his biology-and-photography website The Smaller Majority.

First, the photo (all captions are Piotr’s), taken in Mozambique’s Gorongosa National Park:

And a long photo, described thusly:

Earlier this year I ran across a gorgeous male specimen of Idolomorpha dentifrons on the Cheringoma Plateau of Gorongosa, but had troubles photographing it in a way that would properly convey its incredibly elongate morphology. In the end I took a series of vertical photos of its head and front legs that I stitched together in PS, and here is the result. Male empusids are unusual in having pectinate antennae, the kind usually seen in silk moths and other insects with well-developed pheromonal communication, where the female emits sex pheromones and males follow the faint scent trail. Not surprisingly, such behavior was recently demonstrated to be present in empusids (Gemeno et al. 2005. J. Ins. Behav. 18: 389-403).

I’ll add one more photo of another bizarre species in the small family Empusidae: the striking Devil’s mantis:

The leaf-like morphology can be seen in the Devil’s mantis (Idolomantis diabolica), arguably one of the most striking and beautiful praying mantids in the world. The body of immature individuals resembles a dry, withered leaf, except for the brighter colors on the underside of the raptorial front legs. Adults turn pale green and white, and the pattern on their front legs becomes brightly red, resembling vivid petals of a flower. There is a reason for this – Devil’s mantids are specialized hunters of pollinators, such as bees and butterflies, and presumably this bright coloration fools some insects into coming dangerously too close. 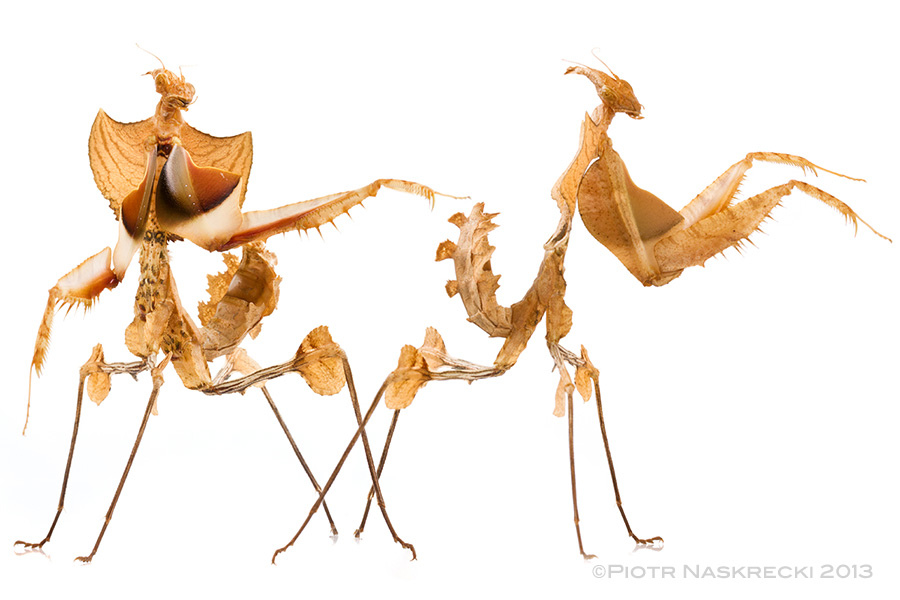 16 thoughts on “Another fantastic mantid”