You could have knocked me over with a feather. The new Greek prime minister is an out atheist, and has refused any religious accoutrements at his swearing-in ceremony. Having lived in Greece as a child and visited several times since, I know what a religious country it is. Nevertheless, as The Economist reports:

GREECE’S new prime minister, Alexis Tsipras, made history within hours of his victory by informing the Archbishop of Athens, very politely, that clerical services would not be required for his swearing-in ceremony. An avowed atheist who has nonetheless made a point of dealing courteously with senior clergy, Mr Tsipras lost no time in making known that his oath of office would be a secular procedure. It was also explained that when the whole cabinet was sworn in, a more junior cleric (but not the archbishop) would be invited to assist those who wished to take a religious oath.

Here’s Tsipras, who reminds me of a young Al Franken. He’s a leftie, too, and has a partner and kids but isn’t even married. You go, Greece! 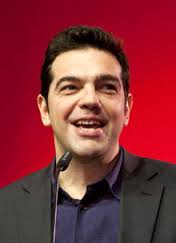