I’m so pleased: my Ph.D advisor, evolutionary geneticist Dick Lewontin, has received the prestigious Crafoord Prize in Biosciences this year, along with Japanese theoretician Tomoko Ohta. The press release announcing it (and describing their contributions) is here, and there’s also a video that you can see by clicking on the screenshot at the bottom.

Lewontin made major contributions in both experimental and theoretical population genetics, with his most famous finding being the revelation of substantial genetically-based polymorphism (variation among individuals) in the sequences of proteins, a finding confirmed by subsequent DNA sequencing. Ohta, a theoretician, made fundamental contributions in explaining why that variation is there, especially variation that is “neutral” and doesn’t affect the fitness of an individual. They are deserving recipients. 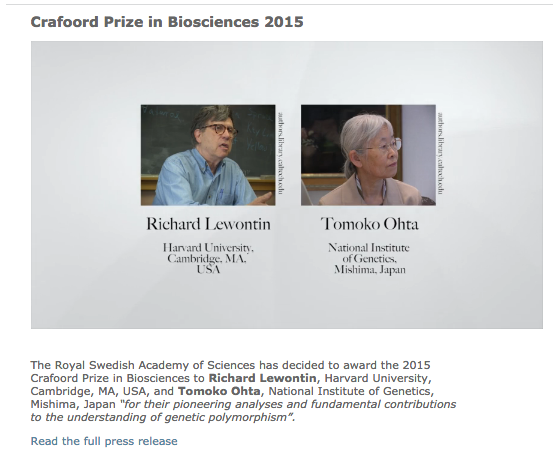