UPDATE: I’ve heard from Michael, who emphasizes that he does not think that the experience implies the supernatural or the paranormal, and he points to a clarification (mentioned by a reader) that Shermer recently published in a “Big Ideas” piece on Slate.  Distressingly, that piece is part of a discussion/advertisement sponsored by the John Templeton Foundation (subject: “What is the future of religion?”), and the discussants are well remunerated by the Foundation. (I loathe these “Big Questions” pieces, which are really ads, not articles in Slate or the New York Times.) But the point of Shermer’s piece stands: he affirms clearly that he doesn’t accept the supernatural, and he’s going to add the update to his original Sci. Am. post.

But this sentence still remains in his text: “I have to admit, it rocked me back on my heels and shook my skepticism to its core as well.”  Bad choice of words.

UPDATE 2:  Michael has written a clarification of his piece for me to put up, and here it is:

I read your commentary, Jerry, and as usual with your critiques in your blog I agree with all your points about my Scientific American column. To clarify matters please see this further explanation of my interpretation, which is that my experience in no way implies something paranormal or supernatural. As I’ve always said (and repeat here), there’s no such thing as the paranormal or supernatural; there is just the normal, the natural, and mysteries as yet unexplained by natural law and chance/contingency.
Much has been made of the subtitle of the original column (stating that my skepticism was shaken to the core), a variation of which was used for the Online title of the essay. As is common in all magazine and newspaper articles, essays, and opinion editorials, the editors write the title and subtitle in a way that will make the article seem more compelling to read, and that is the case here. My Scientific American editors give me much freedom in choosing my own titles and subtitles, but when they have done rewrites for previous columns I have always felt they were better than my original, and this one seemed good to me at the time. But now I see that many readers took it in a way I had not intended. My skepticism is in fine shape.

Hopefully this clarification in Slate will clear up matters. I guess if I had to sum it up even briefer it would be this: Weird things happen. We can’t explain everything. Enjoy the experience. But don’t abandon science or the natural worldview.
Michael

My only response besides expressing relief, is the one above: the title and subtitle were actually taken from Shermer’s own words. But again, his stand is clear, and that’s what we should take away from this (besides the lesson to be careful with words!).
__________________________

When a reader sent this to me, I was naturally curious, and so went over to Scientific American to see what all the fuss was about. 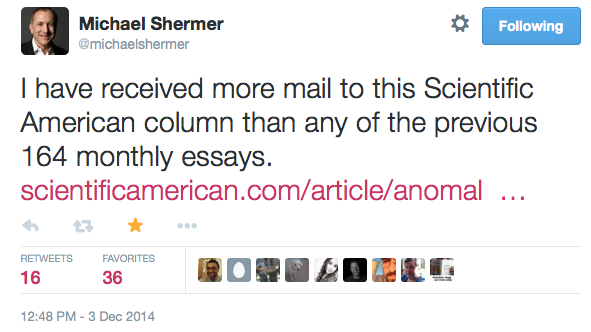 There I found Michael’s piece, “Anomalous events that can shake one’s skepticism to the core,” which recounts a story that happened to him when he got married. It’s a short piece, so you can read it yourself, but a brief synopsis follows. Before the wedding, Shermer’s fiancée Jennifer received a box of stuff that belonged to her beloved grandfather, stuff that included his broken 1978 transistor radio. It was busted, and Shermer tried to fix it, even putting in new batteries and banging it about, but no dice. The radio was kaput.

But it came back to life, and at a weird time. Shermer tells the rest:

Three months later, after affixing the necessary signatures to our marriage license at the Beverly Hills courthouse, we returned home, and in the presence of my family said our vows and exchanged rings. Being 9,000 kilometers from family, friends and home, Jennifer was feeling amiss and lonely. She wished her grandfather were there to give her away. She whispered that she wanted to say something to me alone, so we excused ourselves to the back of the house where we could hear music playing in the bedroom. We don’t have a music system there, so we searched for laptops and iPhones and even opened the back door to check if the neighbors were playing music. We followed the sound to the printer on the desk, wondering—absurdly—if this combined printer/scanner/fax machine also included a radio. Nope.

At that moment Jennifer shot me a look I haven’t seen since the supernatural thrillerThe Exorcist startled audiences. “That can’t be what I think it is, can it?” she said. She opened the desk drawer and pulled out her grandfather’s transistor radio, out of which a romantic love song wafted. We sat in stunned silence for minutes. “My grandfather is here with us,” Jennifer said, tearfully. “I’m not alone.”

Shortly thereafter we returned to our guests with the radio playing as I recounted the backstory. My daughter, Devin, who came out of her bedroom just before the ceremony began, added, “I heard the music coming from your room just as you were about to start.” The odd thing is that we were there getting ready just minutes before that time, sans music.

Spooky, no? Even spookier is that the radio then played through the night, but went dead the next day and has never worked since.

What can we conclude? Shermer, I believe, has published on the fact that such coincidences happen; and with stuff like broken watches restarting when Uri Geller appears on television, you can actually calculate the probability that it would happen among thousands of people watching. It’s not miniscule. Further, as Shermer has pointed out, incidents like the above stick in one’s mind as anomalies, and can be interpreted as miracles, but what does not stick in our minds is the vastly more numerous times when these coincidences do not occur.

The parsimonious conclusion, given our lack of evidence that the dead somehow live on and try to communicate with us, is that the radio’s new batteries and getting whacked somehow turned it on. Indeed, Shermer asserts that that’s the logical explanation had it happened to someone else:

What does this mean? Had it happened to someone else I might suggest a chance electrical anomaly and the law of large numbers as an explanation—with billions of people having billions of experiences every day, there’s bound to be a handful of extremely unlikely events that stand out in their timing and meaning. In any case, such anecdotes do not constitute scientific evidence that the dead survive or that they can communicate with us via electronic equipment.

But it happened to Shermer, so, as he says below, it “shook his skepticism to the core.”

Jennifer is as skeptical as I am when it comes to paranormal and supernatural phenomena. Yet the eerie conjunction of these deeply evocative events gave her the distinct feeling that her grandfather was there and that the music was his gift of approval. I have to admit, it rocked me back on my heels and shook my skepticism to its core as well. I savored the experience more than the explanation.

The emotional interpretations of such anomalous events grant them significance regardless of their causal account. And if we are to take seriously the scientific credo to keep an open mind and remain agnostic when the evidence is indecisive or the riddle unsolved, we should not shut the doors of perception when they may be opened to us to marvel in the mysterious.

Sorry, but the emotional resonances of such events don’t give them any greater credibility than possible scientific explanations, if that’s what Shermer means by “significance.”

And I’m not sure why it should shake his skepticism to the core simply because it happened to him. After all, if it happened, it had to happen to someone!

Shermer’s last paragraph is a bit distressing to me, for he made no attempt to gather more evidence—by looking at the radio, for instance.  The “evidence” he has is a one-off event, so is he really going to remain agnostic about the possibility that the dead grandfather was somehow trying to communicate with his wife? After all, people have rare experiences seeing or talking to God, so is Shermer going to remain agnostic about God as well? I don’t think so.

Yes, if there were repeated evidence for the dead trying to reach their descendants (and, after all, why didn’t Grandpa simply speak to them?), we should indeed discard our tentative conclusion that the dead don’t communicate with us. But this is a one-off event—certainly not enough to make scientists and skeptics revisit our provisional rejection of communication from the dead.

But it’s no wonder that Shermer got so much mail about this. For those who believe in an afterlife, this somehow buttresses their delusions, and for Scientific American readers like the one below, Shermer is allowing a personal experience to shake his skepticism so severely that he now becomes an agnostic about communicating with the dead. That’s just weird.

Take-home lesson for all skeptics: one off coincidences like this should not suddenly make us agnostic about the numinous and the supernatural, especially when they aren’t repeated or investigated thoroughly.

I was embarrassed to read your concluding paragraph. What are we to keep an open mind about? That Jennifer’s dead grandfather maybe fixed the radio? Did he even know how to fix radios? Wouldn’t there be an easier way for the dead to communicate with the living? It would be mildly interesting to have an electronics expert determine exactly what is wrong with the radio.

190 thoughts on “Shermer has a woo experience, admits there may be something to it”