I’ve finally finished reading theology, though I suspect I’ll dip into it now and again when my stomach feels strong enough. Now I can cleanse my brain by reading some heathen literature, and have just finished John Loftus’s book, The Outsider Test for Faith: How to Know Which Religion is Really True (Prometheus, published March, 2013).  I recommend it to readers, particularly those who haven’t followed John’s scattered writings about this idea: 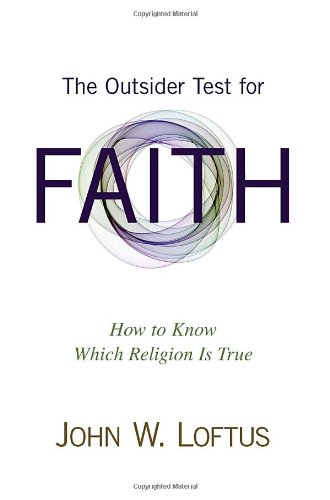 I’ve written about the Outsider Test for Faith (OTF) before, and you can read an early version of John’s idea here. It’s a simple idea, but one that nobody had formally proposed as a way to gauge whether one’s religious beliefs are “correct.” In this book, John present the theory in extenso and discusses (and rebuts) some of the criticisms offered by religionists like Alvin Plantinga.

As Thomas Henry Huxley remarked when hearing about Darwin’s On the Origin of Species and the idea of natural selection, “How extremely stupid not to have thought of that.” That’s the way I felt when I heard about the OTF. Loftus first notes that the vast majority of believers get their religion from their geographic location, for that’s where one’s parents, peers, and clerics are. If you’re born in Saudi Arabia, chances are high you’ll be a Sunni Muslim; if you’re born in Brazil, in all likelihood you’ll be a Catholic (see the map below).

That means that virtually no people choose their religion after weighing all possible religions or even more than one religion (in fact, in some Muslim countries you can be killed for choosing anything but Islam). Rather, people assume a faith by simply inheriting their beliefs, largely through indoctrination.  Is that any way to choose something that people consider of the greatest import? After all, if you choose wrongly, many religions say you’ll be consigned to the pit of Hell. Other religions maintain that only their adherents (and not all of them) will go to Paradise, while others simply vanish into nothingness after death. Very few religions claim that they’re no truer than any other religion.

So isn’t it the rational thing to do to scrutinize existing faiths before you choose one? That’s the basis for John’s OTF, which is summarized below, from pp. 16-17 of his book:

. . . So I propose that: . . . The only way to rationally test one’s culturally adopted religious faith is from the perspective of an outsider with the same level of reasonable skepticism believers already use to examine the other religious faiths they reject. This expresses the Outsider Test for Faith (OTF).

Of course, if you do that properly, you’re going to wind up an atheist, for every believer dismisses all other faiths as lacking evidence. If you take that attitude towards your own faith, you should abandon that, too. And that is the point. The beliefs most important to people are, as we know, not only irrational in content, but irrational in how they were chosen.

A lot of the book is occupied by John’s discussion of challenges from believers, including those who think the OTF shows that their religion really is best (Plantinga is one of these) and those who claim that there should be an “outsider test for atheism” (that’s ridiculous given that atheism is based on the view that one requires evidence for belief).

The book ends with two cute maps, showing the difference between disparate and divisive religious beliefs and the unifying nature of scientific inquiry. The colored maps below come from John’s website, Debunking Christianity: 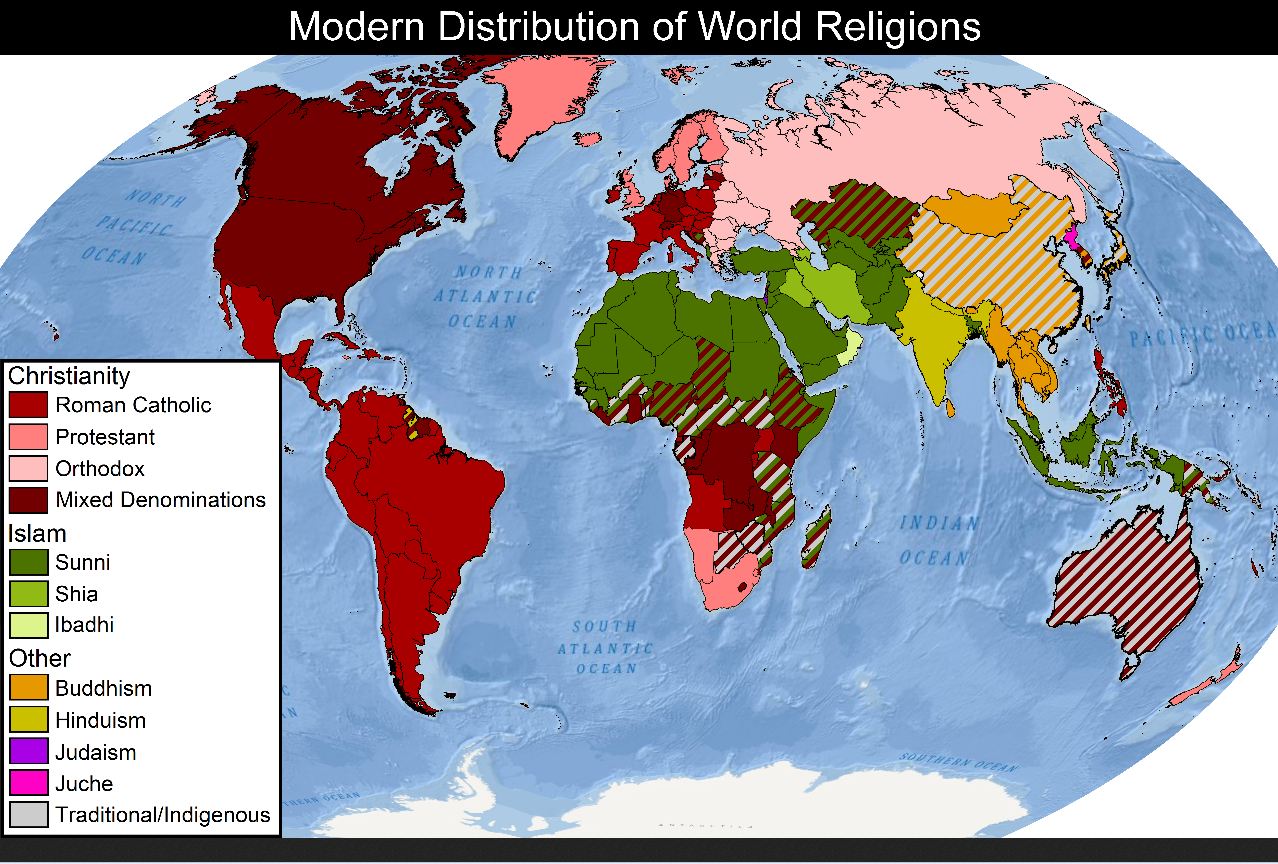 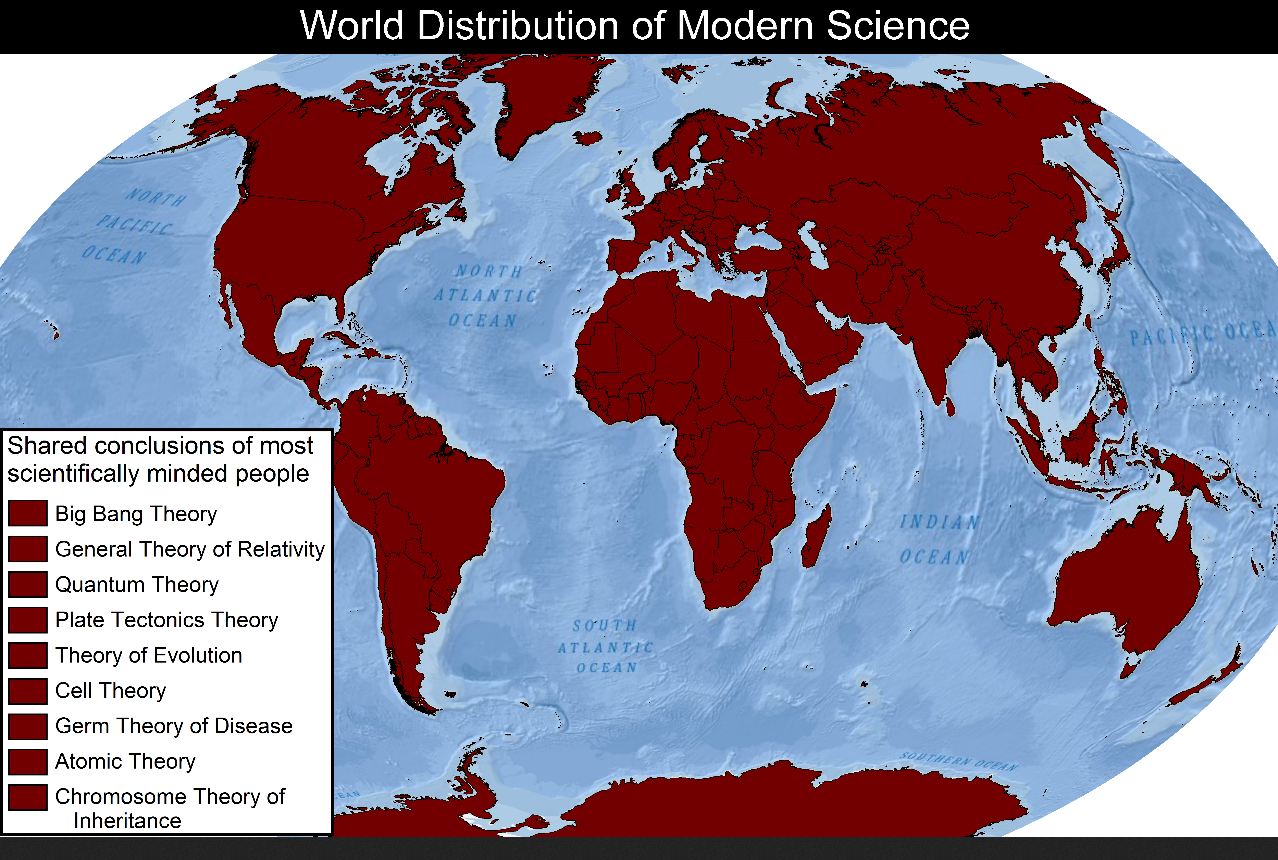