Skip to content
The loudest Western defenders of Islam and the biggest critics of “Islamophobia” are now the newspapers and radio stations in the UK, especially the Guardian and the Independent. But the BBC plays a role too. Here’s a BBC report with a three-minute must-watch video showing a 13-year-old Syrian boy (“Abbu Hattad,” now in Turkey) expressing his desire to become a jihadi and join ISIS. (Click on the screenshot to go to the piece, which is also here). 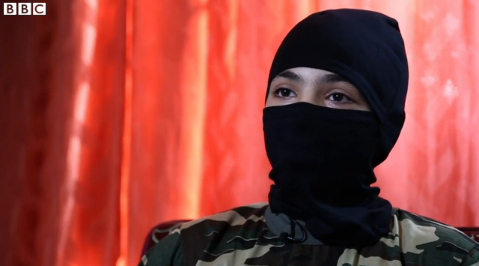 Besides noting the horror of such a young child brainwashed into wanting to “behead infidels”, and claiming that “Allah told us to fight for the next life—for Paradise,” we see his mother saying how happy she’d be if her son died as a martyr for ISIS.
To what does the BBC commentator attribute the child’s motivations, and that of other children bent on becoming jihadis? He concludes:

The Syrian children who join these militant groups grew up in war, and much of their motivation must come from that experience. Their formative years have been blackened by hatred, their mindset altered, their childhood stolen. The innocence of a generation is being destroyed—no longer seen as children, but as tools of war.

Notably absent is any mention of religion, except from the boy himself. Nope, it’s just “war:. And even though it’s a war in which kids like Abu explicitly ascribe their motivations to religion and to the Muslim promise of paradise, the BBC wants to stay miles away from that one. It’s the “anything-but-religion” psychology that permeates the British media.  It’s despicable. We can’t begin to effectively defeat the enemy under we understand what drives him. ~

72 thoughts on “More of the “it’s not religion; it’s anything else” nonsense from the UK”