Dr. Oliver Scott Curry works on the evolution of morality at the Institute of Cognitive and Evolutionary Anthropology at Oxford. Just to check out Reza Aslan’s claim that female genital mutilation (FGM) was an African rather than an Islamic problem, Curry did a preliminary statistical analysis. As you’ll see below, his results (and he emphasizes again that they’re tentative and need deeper analysis) don’t support the “African Hypothesis”. Note that “rs” is the nonparametric Spearman rank correlation coefficient between two variables, a measure of their association. It ranges from -1 (perfect negative correlation) through 0 (no correlation) to 1 (perfect positive correlation). The statistically significant positive relationship between Islam and FGM is given in his title.

Who’s right? You can’t tell on the basis of these cherry-picked examples, as you have to look at all of the data. This is not my area… but the data is not difficult to find. We have WHO data on FGM, and Pew data on the prevalence of Islam (and from Wikipedia, Christianity), in 28 African countries (and Yemen as well).

These data [JAC: presented as a plot below] clearly show that there is a large significant positive correlation between the percentage of women subject to FGM, and the prevalence of Islam. Both variables are non-normal, so technically we should report a Spearman’s correlation: rs=0.54, p=.003. The correlation between FGM and Christianity is negative (rs=-0.48, p=.01).

So Aslan is wrong. There is a “factual, empirical” relationship between Islam and FGM. Maher’s examples illustrate this relationship, whereas Aslan’s examples are conspicuous outliers.

Aslan is also wrong to say that “Nowhere else in the Muslim, Muslim-majority states is female genital mutilation an issue”. It would be more accurate to say that we just don’t know whether the relationship between Islam and FGM holds elsewhere because (as far as I can tell) there is no reliable data on FGM outside of Africa. Absence of evidence is not evidence of absence.

Of course, correlation does not prove causation. Why there is this relationship between Islam and FGM is a separate question. And certainly the outliers—Senegal, Yemen and especially Niger—suggest that there is no necessary connection between Islam and FGM. So what other factors may be at work? Poverty? Healthcare? Education? Here are some UN development data for the same 28 countries: Gross National Income / capita, life expectancy, years of schooling, and a composite Human Development Index (HDI). Of these, Islam remains the single best predictor. And surprisingly, there is no relationship between FGM and income, life expectancy or development. But there is a negative relationship between education and FGM (-.44) (And schooling is strongly negatively correlated with Islam [-.55]). So who knows, perhaps education is key.

Like I said, this is not my area. I don’t know how this problem might be solved. (Perhaps a reader of this blog with expert knowledge of FGM can help illuminate the issue, or point to additional data.) But I do know that it won’t be solved by misrepresenting the evidence. As Aslan himself says in the CNN interview: “You know, this is the problem, is that these kinds of conversations we’re having aren’t really being had in a legitimate way. We’re not talking about women in the Muslim world. We’re using two or three examples to justify a generalization. That’s actually the definition of bigotry.” 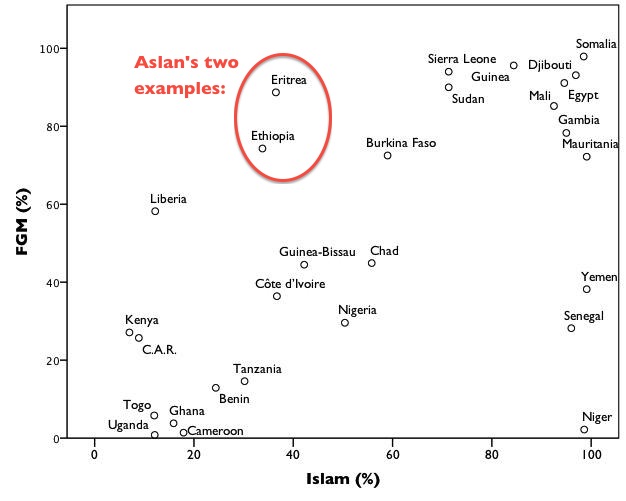 70 thoughts on “Guest post: The relationship between Islam and female genital mutilation”