Ensannualh Ehsan is a spokesman for a splinter group of the Taliban in Pakistan.  Here’s a tw**t he issued yesterday on the occasion of Malala’s Nobel Peace Prize: 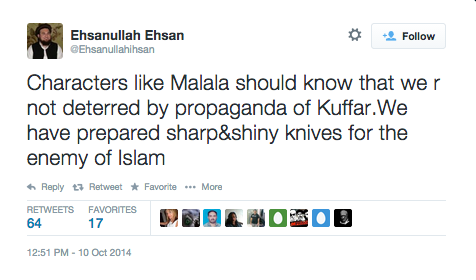 Hmm. . . Pakistan. Wasn’t that one of the places that Reza Aslan singled out for having “good” Muslims? Certainly there are some, but Pakistan is hardly a shining beacon for the benignity of Islam, and this “character”, well, I don’t think he’s motivated by colonialism or secularist aspect of culture.

What, exactly, did Malala do wrong, even in the eyes of monsters like Ehsan. She tried to go to school, and to empower women. What a crime!

But let us note, too, that many in the Swat Valley celebrated her prize. It’s a pity that Ehsan and his fellow thugs have the upper hand.