Regular Diane G., whom I thought was mostly into birds, sent a bunch of Monarch butterfly pictures as well as an extra lep species. She also has two questions for butterfly mavens—see after picture #4:

Last Friday I was birding on the shores of Lake Erie, at a site that consisted of several large impoundments bordered by causeways, when I noticed a flutter of Monarch Butterflies  (Danaus plexippus) at my feet. They apparently were drawn to a rather unattractive plant managing to eke out a living in the dry graveled surface of the causeways. 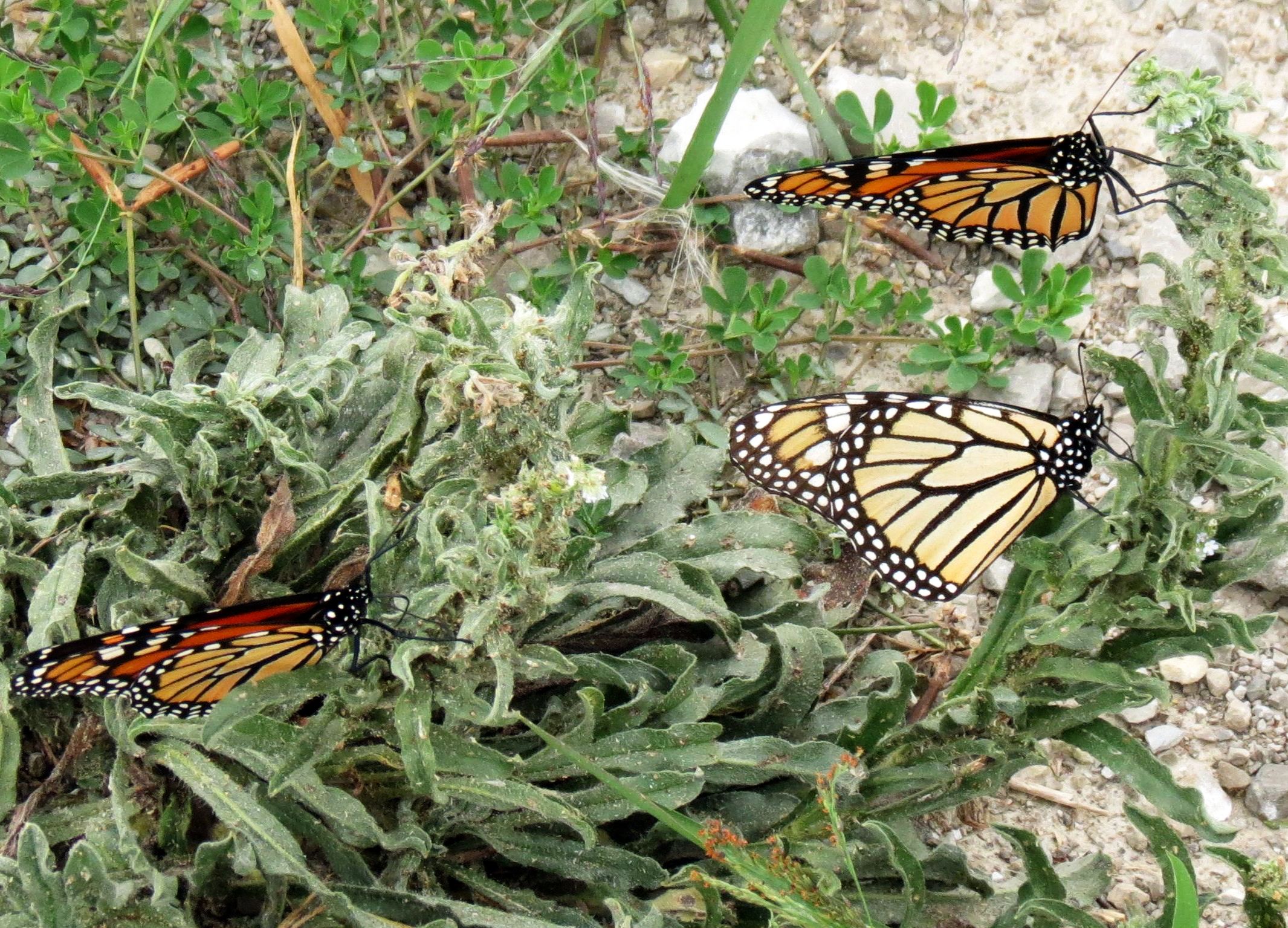 I reflexively pointed my camera down and grabbed just a few quick shots, being primarily interested in birds. Later I became more intrigued when I had a look at my pictures and noticed that the butterflies were extending their proboscises (proboscides for Diana), not to the minute, difficult-to-notice flowers of this nondescript herb, but instead apparently to the surface of the twisty gray, hairy leaves themselves.  (I suppose it’s possible they were merely searching for the flowers, but somehow one expects butterflies to be more adept than that.)
See tiny flowers here, to the right: And I’ll throw in one of the few spread-winged shots I got, though my shutter wasn’t fast enough to stop the wing closing action that began as soon as a butterfly touched down: So–I’m wondering if any of our resident entomology experts can explain this behavior?  (The name of the plant would be appreciated as well.)
And speaking of lepidopterans, I snapped a few shots of this lovely Common Buckeye (Junonia coenia) the same day: (Excuse the lack of paragraph spacing below; I can’t seem to fix it.)
By the way, our resident butterfly evolutionist, Dr. Marcus Kronforst, informed me that the Monarch/Viceroy “Batesian mimicry” story is bunk—or at least more complicated than conventional wisdom dictates.  People have been saying this for a while, but I wanted to ask an expert. Let me recount the story.
The classic tale is that the Monarch is unpalatable because it eats mostly milkweed, which renders it toxic and sickening to bird predators. (Milkweed contains cardiac glycosides, which the butterflies sequester in their bodies, probably as a defense against predators. A Monarch fed on non-toxic plants is perfectly edible). The bright black-and-orange of the monarch was supposed to be “aposematic”: a warning coloration that says “don’t eat me” to birds. (I won’t get into the evolution of aposematic coloration, as it’s complicated.)
The Viceroy butterfly (Limenitis archippus), also North American, was supposed to be tasty and edible, but gained protection from bird predation by evolving a mimicry of the Monarch’s colors and pattern: a resemblance called “Batesian mimicry” after the British naturalist H. W. Bates. Birds entrained on the Monarch pattern would simply avoid taking Viceroys. I taught this as the classic example of Batesian mimicry for years, and it was in all the textbooks. (I am sure creationists will hop on this, for they haven’t learned that science advances, and truths are provisional.)
The mimicry between these two largely unrelated species is striking, but the story isn’t quite correct. Here’s a picture from A Network of Ideas, which presents the erroneous story and also gives an incorrect characterization of the butterflies’ palatability. In fact, in many places the “palatable” Viceroy is actually unpalatable, eating toxic compounds that also render it distasteful to predators.  In such places the mimicry may be of a different form: Müllerian mimicry (after the German naturalist Fritz Müller), in which two unpalatable species mimic each other.  Natural selection would favor a convergence of color and pattern among unpalatable species, for by resembling something the predator has already learned to avoid, you would minimize your chances of being attacked and killed—even if the predator does spit you out after it tastes you.  So in places where both species are distasteful, we have a case of Müllerian rather than Batesian mimicry.
But in other places Viceroys are tasty and nontoxic as they don’t eat plants whose compounds make them distasteful. In those places the mimicry might truly be described as Batesian.
That still leaves the question of how the system began. For surely the resemblance to Monarchs did not evolve twice in Viceroys independently, in some areas as a Batesian pattern and in others as a Müllerian one. But once the resemblance did evolve, it could be useful no matter whether the Viceroy was toxic or not.  Which evolutionary process came first? Who knows?
Finally, as I’ve implied, things can get quite complicated. In some parts of the world a single pattern can serve to enforce both Batesian and Müllerian mimicry. Here’s a figure from Wolfgang Wickler’s classic book Mimicry in Plants and Animals (1968) showing three instances of what are called “mimicry rings.” Each column represents a series of diverse species from one area that resemble each other. Those species above the gray bar are said to be Müllerian mimics of each other: they are all distasteful. Those similar species below the gray bar are said to be Batesian mimics of those above: they are all tasty and evolved a similar pattern to species above the bar as it would reduce predation. Remember, each butterfly is a separate species. The resemblance among species within each of the three groups is remarkable. Now, you might ask yourself, how do we know which species are distasteful and which are edible? I don’t know the answer, but I suspect that biologists simply tasted them! Hairy-chested field biologists (males, that is) often will pop insects into their mouths, assuming that if it’s noxious to them, it’s noxious to predators.  Dan Janzen, a famous naturalist who was the head of my Tropical Studies course in Costa Rica in 1978, used to do this. I’m not sure, though, whether that’s a good test!
The best way would be to use the same method Lincoln Brower did when he demonstrated that Monarchs are toxic. Give a Monarch to a naive, hand-raised bird (he used blue jays). The naive jay noms it eagerly. A few minutes later, the jay gets queasy and vomits. When presented with another Monarch, the jay freaks out and won’t eat it. Only one experience is sufficient to teach the bird to avoid the pattern. This shows that the Monarchs are toxic and that birds can learn quickly.
Here’s the classic series of photos of a naive jay nomming a Monarch and then throwing up shortly thereafter:
Brower also showed that an entrained bird avoids Viceroys as well, although they’ll nom them eagerly and want more if they haven’t previously tasted a Monarch. This is the experiment that led to the notion that Viceroys are tasty and are avoided because they resemble monarchs, which birds have tasted and rejected. And that was the classic demonstration of Batesian mimicry.
Now I’m not sure if Brower used Viceroys taken from an area where they are indeed palatable, but, as I said, the story is more complicated than this. Had he used the toxic races of Viceroys, he might have concluded that they are Müllerian rather than Batesian mimics. In fact, regardless of how the system evolved, Viceroys are Batesian mimics of Monarchs in some places and Müllerian mimics in others.

63 thoughts on “Readers’ wildlife photos (and a biology lesson)”