Oh hear and attend, my Best Beloved, and let me tell you the story of how the fly lost a pair of wings. Or rather, what it did with the wings that it lost (here endeth the attempt to channel Kipling again).

Flies are technically grouped in an Order known as Diptera – ‘two wings’. This makes them very different from other insects like bees and dragonflies and butterflies, which have two pairs of wings. The ancestral state in insects is to have two pairs of wings, so insects with one pair of wings, like flies and beetles, have apparently ‘lost’ one pair over the course of evolution.

However, nothing actually disappears in evolution – there is always some vestigial trace, be it genetic or morphological, of a past adaptation that has since been ‘lost’ in a particular lineage. So for example, in beetles, the front pair of wings has turned into the ‘shell’ of the beetle, which protects the flying wings during ground locomotion but which flip up during flying, as shown in this great photo by Steve Weeks of a male stag beetle about to take wing (photo taken from here):

In flies, it is the front wings that do the flying, while the rear wings have changed their form and function – they have become compressed into slender dumbell-shaped structures known as halteres, as you can see on this photo of a Tipula cranefly in Georgia, by Wayne and taken from here. 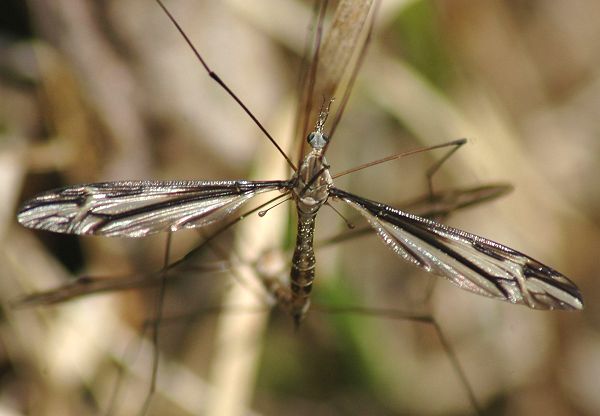 What do the halteres do? Well one (rather cruel) way of finding out is to snip them off – relatively easy in a crane fly. The result is that the fly now bumbles about in a completely undirected way. Flies use the haleteres for balance, and to help direct their flight. There is also a suggestion that they provide  information to motor neurons in the fly’s neck that is correlated with visual input, so the fly knows how to respond to visual stimuli appropriately. (This raises the not entirely facetious possibility that haltere-less flies might also suffer from a kind of motion sickness.)

This fantastic hi-def video of a Syrphid (hoverfly) taking off was doing the rounds on Twitter a month or so ago as part of a ‘high-speed arthropod week’ by Sean McCann on ibycter.com.

You can see that the halteres beat in counterpoint to the front wings. Sean notes: ‘the plane in which the halteres move differs by an angle of up to 30 degrees from that of the wings’. It appears that this involves Coriolis force, as suggested in this diagram from this paper, which you may or may not find informative:

Reader Dom has noticed another behavioural use of halteres, although it’s not clear exactly what’s going on. In these two videos, flies are wiggling their halteres in a coordinated manner while they are sitting on the ground. This may be a consequence of some internal movement that leads to changes in pressure and therefore their halteres moving, or it may be a more immediate use of the halteres – but for what?

This one shows what appears to be a Sepsidae fly looking pretty chuffed about having found some lovely dung (look at it rubbing its little hands in glee!) while brief flashes from behind its wings show the halteres wobbling about:

This crane fly is sitting on the side of a tent (?) and is wagging its halteres too and fro:

So – what do we make of this? What are they doing with their halteres?

Oh, and the answer to ‘what did insect wings evolve from’ is the usual answer to the best questions – we don’t know. The best bet seems to be from gills (don’t forget all insects came out of the sea). Patterns of gene expression of pdm/nubbin in insect wings are also seen in book gills in other arthropods, but this isn’t proof. Interestingly, the same evidence suggest that those gills turned into spinnerets in another arthropod – the spider.

h/t to Dom for prompting all this, and taking and sending the videos!