Today’s New York Times contains a nice profile by Jenny Schuessler of E. O. Wilson, “Lessons from ants to grasp humanity,” that concentrates on his new book, The Social Conquest of Earth (#38 on Amazon already!). I haven’t read the book, and don’t think I’ll be able to in the near future, so if you’ve read it do weigh in below.

Apparently the book deals with the evolution of our own species and the peculiar evolutionary conditions that allowed us to dominate the planet.  I was afraid—and this was confirmed by a rather unsatisfying review of the book by Michael Gazzaniga in the Wall Street Journal—that the book would be heavily larded with Wilson’s new views about the importance of group versus kin selection.  As I’ve posted on this site many times (e.g. here), Wilson and his colleagues Tarnita and Nowak now see “inclusive fitness”—natural selection that includes as its target the fitness of related individuals who share one’s genes—as an unimportant force in the social evolution, and see “group selection” (the differential proliferation of groups regardless of relatedness) as the main driver of the evolution of social behavior in species from insects to humans.

Thus, although Wilson’s book will undoubtedly be readable and instructive (Wilson is a very good writer, though not as good as Dawkins or Gould in his prime), I think his new book has potential to mislead the public, for he’s a widely read and influential scientist.  (As far as I know, he’s the only scientist who has won two Pulitzer Prizes.). And although he has almost no allies among evolutionary biologists in his emphasis on group selection, the book has the potential to convince the public that inclusive fitness is unimportant. That would be unfortunate.

In fact, in his desire to push his new group-selection ideas, Wilson has largely abandoned the ideas about social evolution that made him famous. In a piece by Jonah Lehrer in The New Yorker, for instance, Wilson expresses these views:

“I’ve always been an ambitious synthesizer,” he told me [Lehrer]. “But I’m now wise enough to know the limitations of that approach.” These days, he regards the books that made him famous—”Sociobiology” and “On Human Nature” (1979)—as flawed accounts of evolution, marred by their uncritical embrace of inclusive fitness. He’s prouder of an eight-hundred-page textbook that he wrote on Pheidole, the most abundant genus of ants.

This is tragic, and not just because some ant systematists think that his monograph on Pheidole is not up to snuff. When I said this about Wilson in Schuessler’s piece, I meant it:

“ ‘Sociobiology’ is still a very great book, and now he’s trashing it all,” said Jerry Coyne, a professor of ecology and evolution at the University of Chicago. “It’s crazy.” Dr. Coyne was one of more than 150 scientists who signed four letters published last spring in the journal Nature criticizing a 2010 paper by Dr. Wilson, written with the mathematicians Martin A. Nowak and Corina E. Tarnita, outlining his group-selection arguments.

This morning I looked again at my well-worn copy of Sociobiology, which I bought in the year of publication, and I still think it’s a magnificent and influential achievement.  While Dawkins, in The Selfish Gene, used some of the same arguments, Dawkins’s purpose was to show that a gene-centered view of evolution helps bring great clarity to the process of natural selection, while Wilson’s purpose in Sociobiology was to show how the principles of evolutionary genetics (including but not limited to inclusive fitness) bring great clarity to understanding the evolution of social behavior in animals. In that he succeeded magnificently, influencing the entire study of animal behavior and founding a new field whose name has morphed to “evolutionary psychology.”

Although Wilson got a lot of flak for his last chapter of Sociobiology, in which he extended the evolutionary principles of social behavior to humans, I don’t think the last chapter was too bad, and didn’t seriously mar a wonderful book.  Despite its occasional overreaching, the evolutionary study of human behavior has brought deep insights.  We are, after all, evolved mammals—it’s just that the fact we have culture, and that we can’t be experimentally manipulated, makes us hard to study. I didn’t like On Human Nature as much, as I think it was too overreaching and not as well written.

At any rate, Wilson’s dismissal of inclusive fitness is wrong. That brand of fitness is obviously important, as parental care, weaning conflict, and sibling rivalry (ubiquitous phenomena in animals) clearly demonstrate.  It’s a pity Wilson is trying to dismiss all this at the end of his career. But though I’ll fight his misguided ideas tooth and nail, I wish him well, for I like the man. I was his teaching assistant at Harvard, and in fact he helped get me into Harvard for graduate school.

Scheussler’s article has two other statements by Wilson. This one I like:

Not that he shies away from alienating potential allies. Religious readers, for example, may not take kindly to a chapter in the new book depicting religion as an archaic “trap” kept alive today by “purveyors of theological narcissism,” from the pope to the Dalai Lama.

“We’ve been spinning our wheels trying to talk about ways to bring the best of religion and science together,” he said in the interview, dismissing organized religion as fostering tribalism we no longer need.

This one I don’t like.  Although I dislike the term “scientism,” if ever it was instantiated by a statement, it’s in this view by Wilson:

And while some humanities scholars have embraced evolutionary ideas, many others will roll their eyes at his declaration, in a chapter on the arts, that the humanities will achieve a “full maturing” only when they take account of findings in cognitive science and genetics.

I’m not convinced that Beethoven, Tolstoy, or Joyce would have written appreciably better books or music had they had a deeper understanding of evolutionary biology.

Here’s my well-worn copy of Sociobiology. Inside I wrote my name and “September, 1975”: the year of publication: 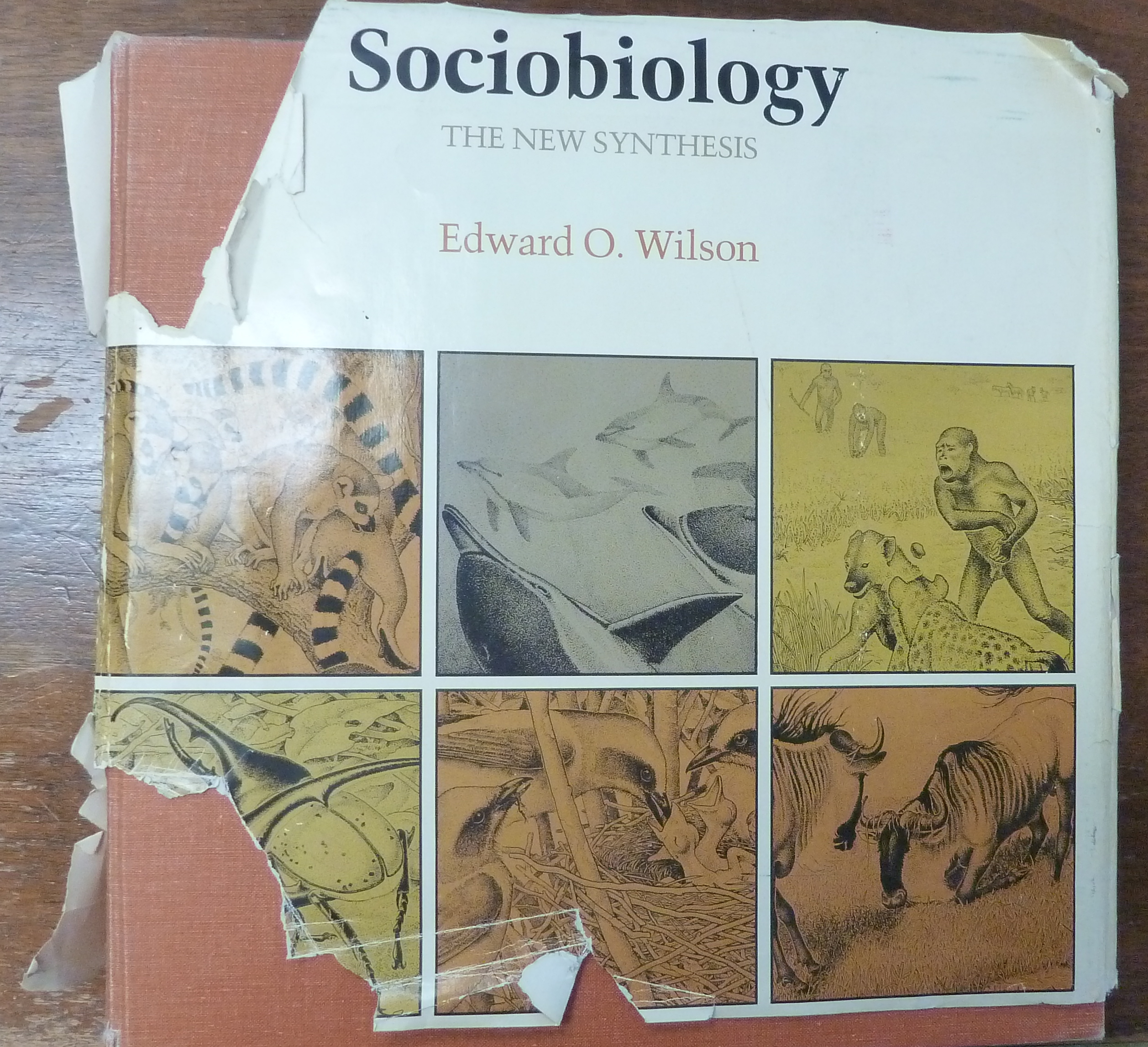