This amazing garment sounds like it’s something from Lord of the Rings – a golden cape made from spider silk. Now on display at the Victoria & Albert Museum in London, it’s the latest creation by a team from Madagascar, Simon Peers and Nicholas Godley. 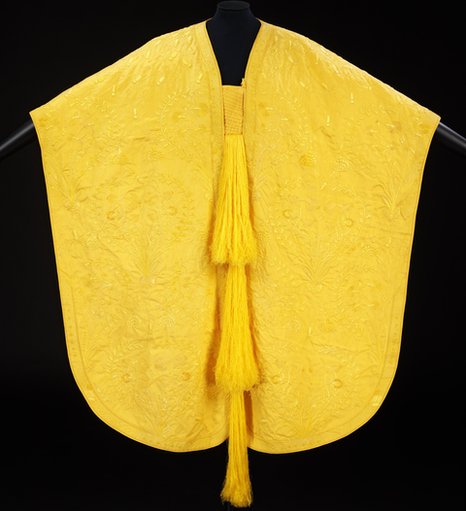 This close-up gives you an idea of the detail in the embroidery: Female golden orb spiders (Nephila madagascariensis) are collected by hand, brought back to the ‘spidery’ and then the silk is extracted from the spider in a tiny hand-cranked device for about 20 minutes. This produces about 80 foot of silk, and the spider is then returned, unharmed, to nature. The incredibly thin silk threads are then spun together to form a thread that can be used to weave and embroider with. Over a million spiders were used to make the cape. You can hear a brief item about it which was broadcast on the Radio 4 Today programme this morning.

Peers and Godley have previously exhibited their material in New York and Chicago, but this is the first time the embroidered cape has been displayed. They apparently got the idea from what sounds like a wacky 19th century Frenchman who lived on Madagascar, Jacob Paul Camboué.

Part of the delight of this material is that it is so difficult to obtain. Peers and Godley have managed to do it because they employ about 80 people to go out every day and collect the spiders. This is not exactly scalable to anything other than their present artistic production levels.

Because of the strength and lightness of spider silk, many people have attempted to bioengineer its production, for example by expressing spider silk genes in goat milk. These efforts were not terribly successful as the amount of silk produced was very small, and the silk had to be separated from the milk, and they are more than a letter apart in real life.

Last week, the PNAS published a paper by Teulé et al (abstract free, article $$$), in which they described the creation of transgenic silkworms that expressed silk genes from spiders. Silkworms are obviously naturally equipped to produce silk, and can be genetically manipulated. The researchers inserted a silk gene from another species of golden orb spider – Nephila clavipes – into the silkworm (this is more complicated than it sounds) and were then able to show that the silkworm was producing chimeric spider/silkworm silk. This last point is important – the silk produced by the genetically engineered silkworm is not spider silk. It is something new, and even though the amount of spider silk present was relatively low (2-5%, the chimeric fibre was in fact even tougher than both silkworm silk and normal spider silk.

For the moment though, it seems as though the only way you’ll get to wear spider silk is by going out and collecting a few million spiders…

The cape is on display at the V&A until June.

The video below is from an earlier display of Peers & Godley’s work, at the American Museum of Natural History:

53 thoughts on “A golden cape of spider silk”