This piece is from the blog of the Heterodox Academy (HA), a group founded by Jon Haidt, Chris Martin, and Nicholas Rosenkranz to promote viewpoint diversity an counteract academic and ideological conformity, especially of the authoritarian sort. They regularly publish articles, and have several discussion groups, including one about STEM matters.

Last year I wrote about the HA’s “Campus Expression Survey“, in which they surveyed U.S. college stuents for their willingness to discuss controversial topics. Students were generally unwilling to talk about controversial subjects, but not the majority of them. This is what they found, summarized in the article below as well as in a recently-published paper (click on screenshot below to read the former):

That’s a reasonable sample, but in general about 25-40% of students were unwilling to share their reluctance to discuss each topic in the classroom, with 60% unwilling to discuss at least one topic.  Some of this surely reflects chilled speech and fear of not sharing “tribal views”, but some of it must be general shyness. It’s not clear what the percentage would be if nobody was afraid of demonization, for even in that case some students would be reticent to speak about stuff!

Now the HA took its survey to New Zealand, and the comparison is given in the following short piece. Overall, NZ students aren’t that much different from American ones:

These trends from the US campuses may seem worrying. It is possible, though, that these views reflect only the United States, with its two-party system and high rate of polarization. How similar is the situation in British Commonwealth countries like New Zealand?

Unlike the United States, New Zealand has a progressive parliamentary democracy, although the country is of course not free of political disagreement. The political system of New Zealand grapples with issues that drive political divisions in the United States as well, including racial prejudice, gun laws, vaccination, taxation, and climate change. However, on the whole, New Zealand society does not display the deep partisan mistrust that characterizes American society.

. . . Bradley Wendel has written about significant differences in the notion of fairness and trust in the government that separate the American and the New Zealand political systems.

. . . New Zealand is also a good comparison as the country has similar issues around political disagreements as the United States and shares the same social issues, including prejudice, inequality, vaccination, taxation, and climate change, that drive political divisions in the United States. At the same time, it is free of the partisan mistrust that characterizes much of American society. It is quite possible that the pattern of responses by New Zealand students would differ from their US counterparts. To find out if this is true, we replicated the US survey with 792 undergraduate students across three of New Zealand’s largest universities.

The answer is simple: yes, Kiwi students are just as wary as American students are of sharing their views in the classroom.  The new survey involved 792 undergrads in 3 New Zealand universities.  In this case, race wasn’t surveyed as a “hot topic.” Though New Zealand doesn’t have the black-white divisions that we do in America, they do have their own racial issues, with the Māori people citing pervasive racism and oppression.  The failure to ask about this is not explained.

Though there are nuances of the data that are explained in the text, like differences between the sexes, religious vs. nonreligious, and liberal vs. conservatives, here’s the one important plot from the published summary paper in the journal Social Sciences: 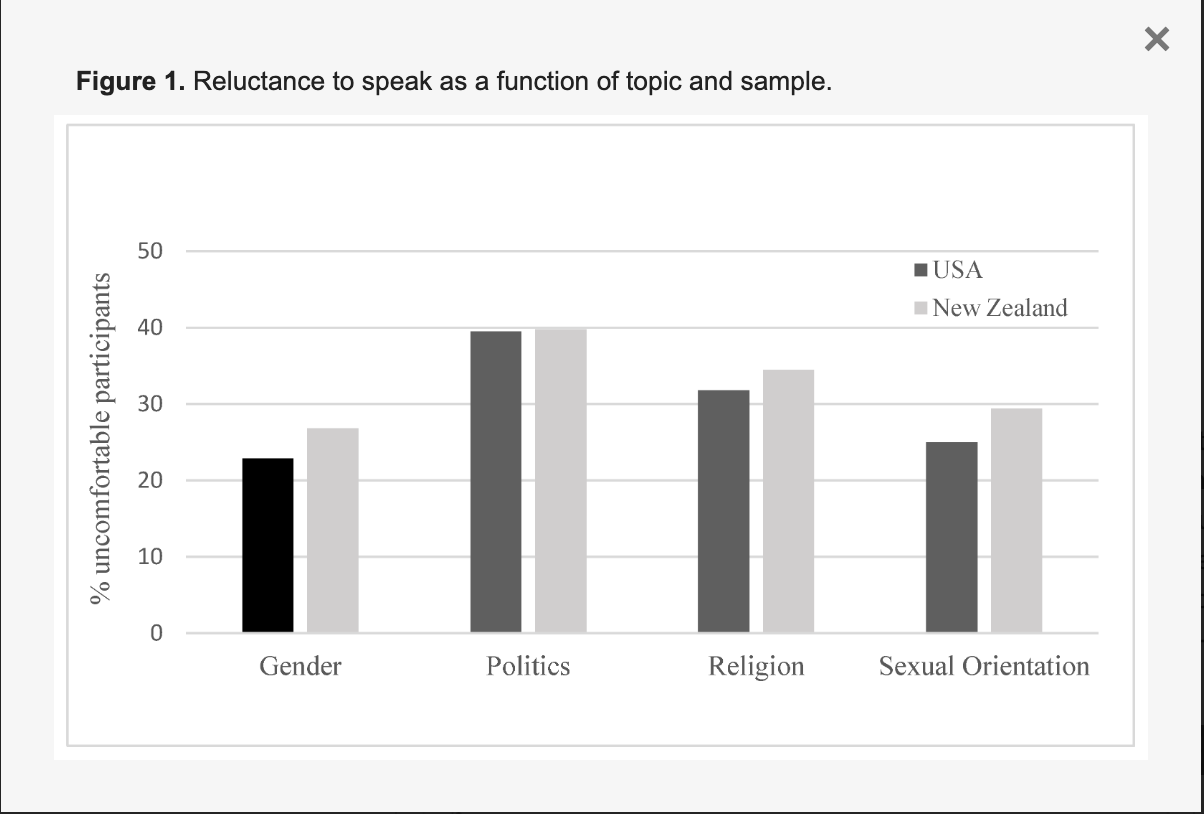 The overall figures are about the same. (Curiously, they didn’t ask what percentage of students would be reluctant to discuss at least one of these topics.)

The authors of the Soc. Sci. paper conclude this way:

The results are clear: chilled campus speech is not unique to the United States. The results do not, however, support a universal phenomenon. Like any country, New Zealand is quite distinct from the United States on some dimensions, but very similar on others. It is not possible from an analysis of New Zealand alone to tell which dimensions are relevant to campus expression or the extent to which results are the consequence of American cultural exportation. Our results ultimately represent just one, albeit significant, dataset, and we encourage other researchers to administer their own versions of the survey to their own students—and academic staff—to create a more accurate picture of the international situation on university campuses.

It’s clear that the differences among topics don’t reflect simple shyness or reticence, as the values would be more equal if that were true. But it’s also not clear how much of the reluctance to speak is due to fear of opprobrium (“chilling”) as opposed to simple shyness or unwilliness to speak in general. At least the figures don’t go above 50%—but remember that this is self-report. I would expect the true figures to be a bit higher than this.

8 thoughts on “College students afraid of speaking out about controversial issues: the U.S. versus New Zealand”