Okay, we’re down to just a few days’ worth of photos, and I’m sweating blood. Please send in your GOOD wildlife pictures, and don’t make me beg!

Today we have a series of photos of one species of bird that lives in Australia. Rodney’s captions are indented, and you can enlarge the photos by clicking on them.

“Build it and they will come” is an oft-quoted forecast that works well in Australia, the most arid, occupied continent on Earth.  If you create a wetland anywhere in Australia, it will quickly host several species of birds.  Foremost among your new permanent residents will be this bird, suitably called a Purple Swamp Hen (Porphyrio porphyrio) 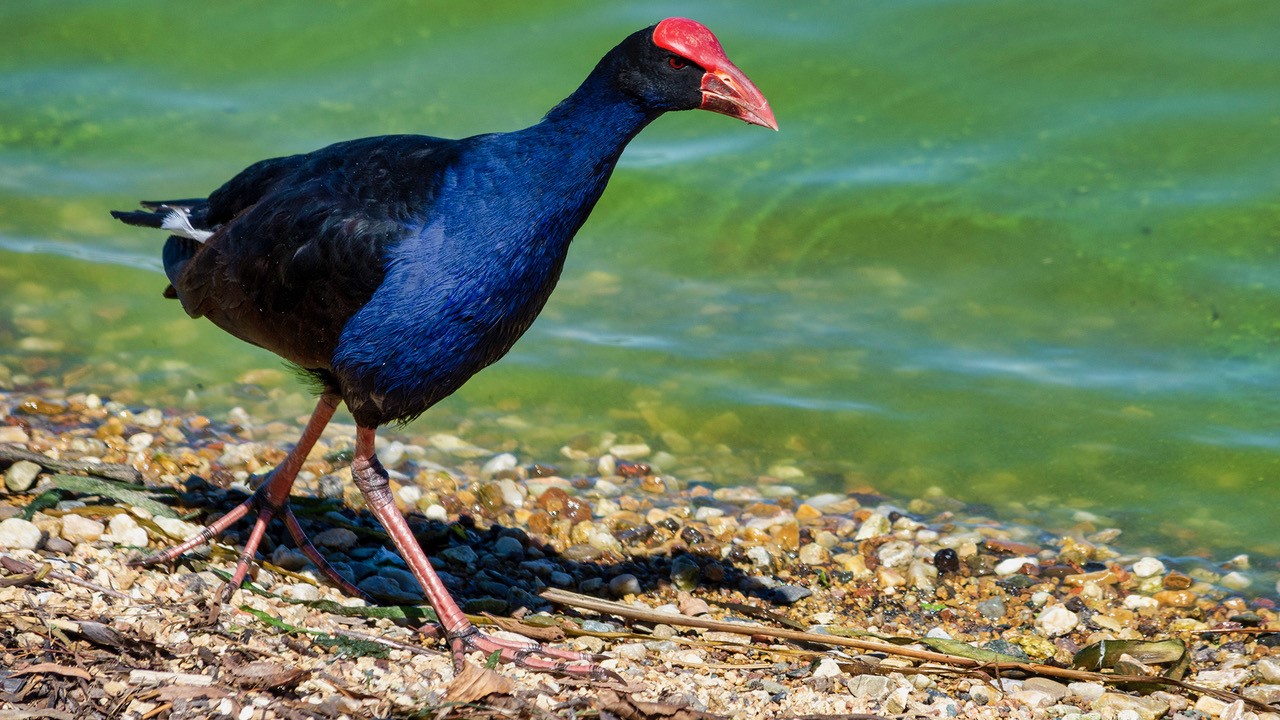 The adult Purple Swamp Hen is a medium-sized bird—about half the size of a domestic chicken—with iridescent purple chest feathers, bright red beak and forehead shield, and long reddish legs with unwebbed toes.  It can readily swim and fly but mostly dwells where that is not required, such as reedy shorelines or dense surface water lilies. 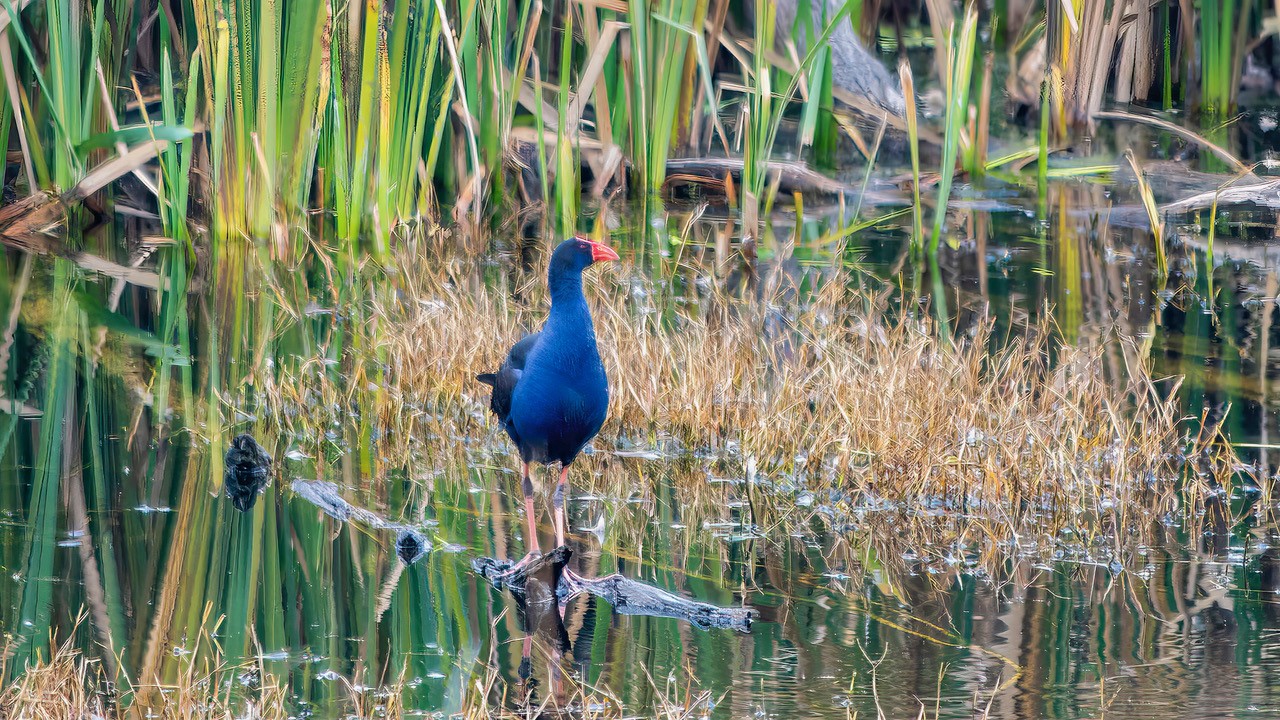 Watching it forage, one’s impression is that, in spite of its long legs and toes, it is an and elegant bird, omnivorous and agile, readily habituating to people.  In nature, it is reputed to be aggressive in defending territory and offspring, as a predator of other bird’s eggs, frogs, and ducklings, and as a scavenger of quite large dead animals. 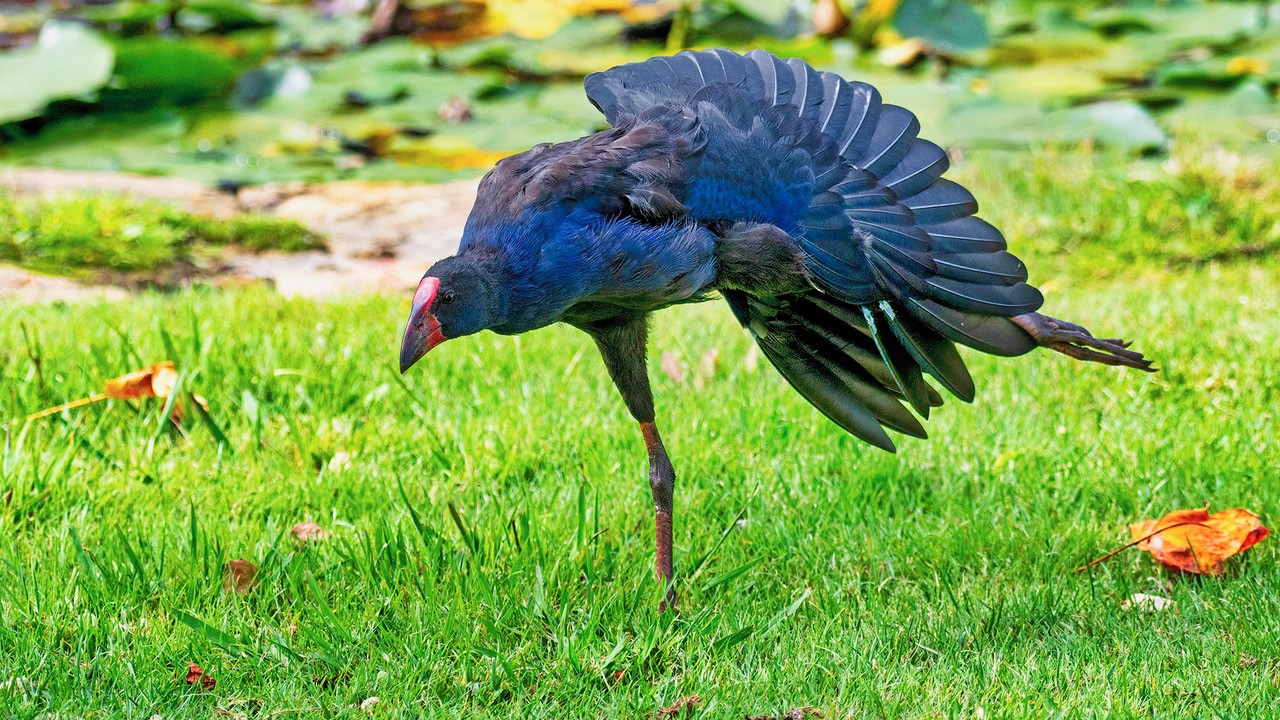 This photographic essay records our serial observations of the appearance and development of several Swamp Hen chicks over several months.  The location was a lily pond in a public recreation area in the city of Canberra, Australia that is just 50 metres from a major freeway (-35.28907°, 149.13579°).  We first encountered the birds on a regular exercise walk, and thereafter carried a camera hoping to repeat the contact.  The birds were not fed or in any way influenced by our presence.  We enjoyed interpreting what we saw. 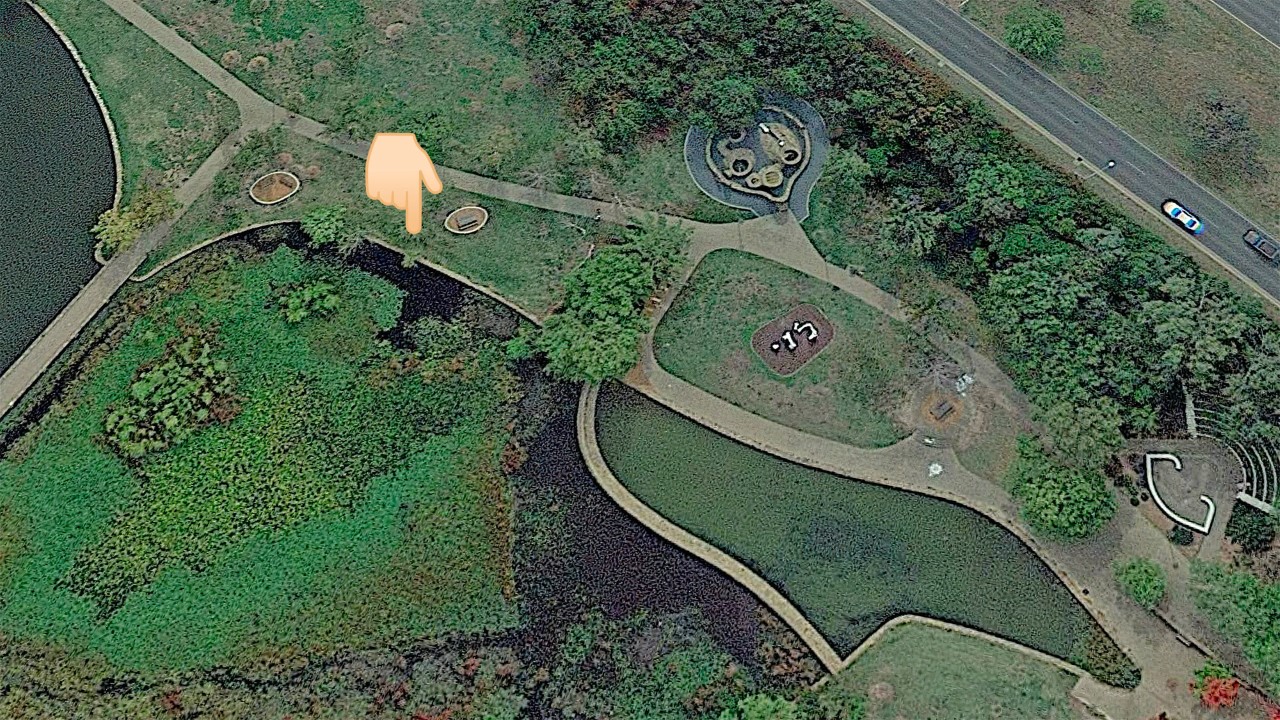 October 18: First sighting a chick exploring its world a short distance from what appeared was its refuge (RHS).  Note the red toes, the featherless wing tip, and the red spot on the head, related to the later growth of the beak shield (?).  Our age guess is about 10 days. 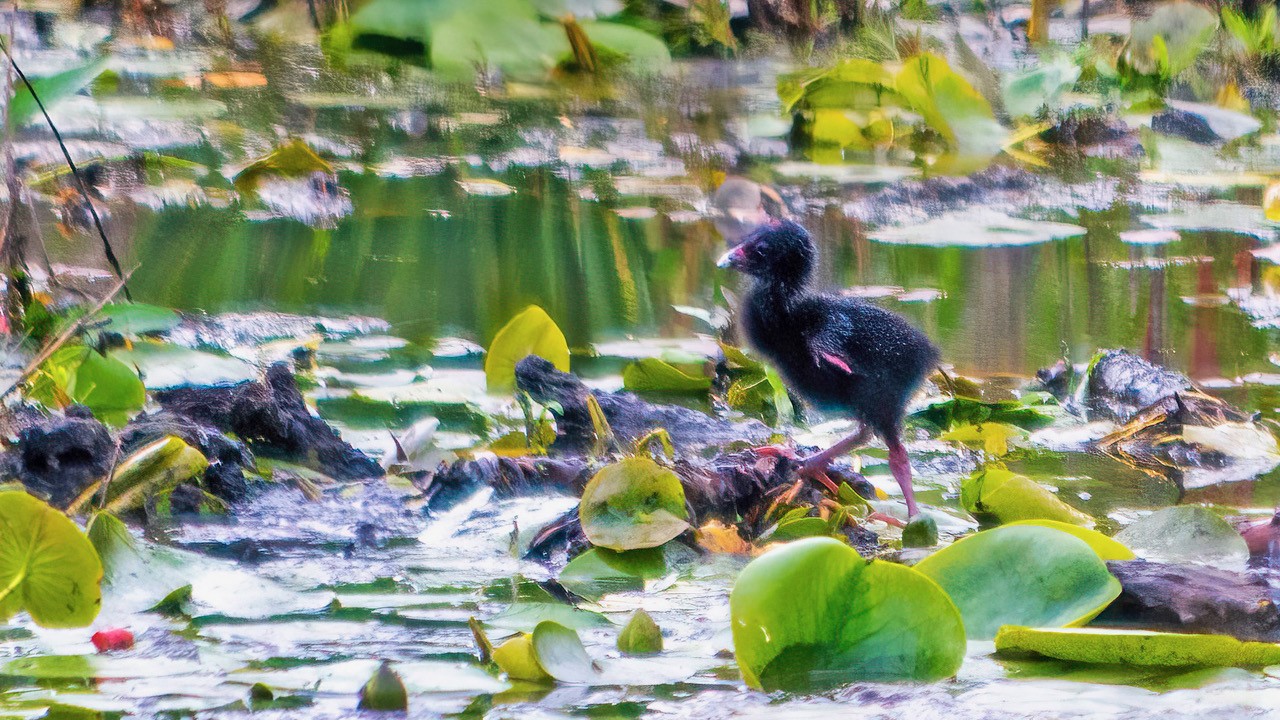 October 20: The same chick (?) foraging for small insects solo and successfully.  Its body size has increased, bloated by its plant diet.  The red head spot and bare wing tip are more visible, and its pin feathers are turning white on the tips. 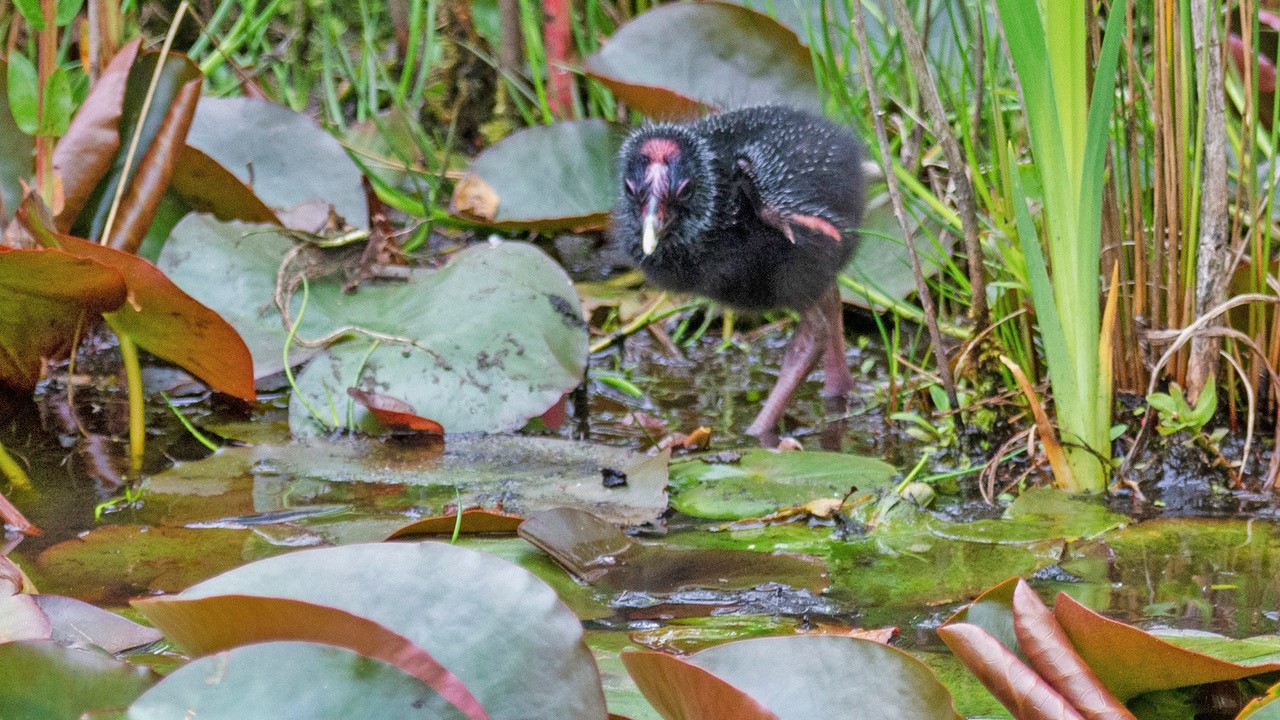 October 20: An adult bird (sex unknowable) emerged to feed and forage with and for the chick.  The size difference is substantial, and the feeding ritual was done slowly and with care.  We were unable to determine what the adult bird held in its beak – most like part of an insect.  The chick solicits feeding by bowing its head, gaping, and fluttering its wings, all very common bird behaviours. 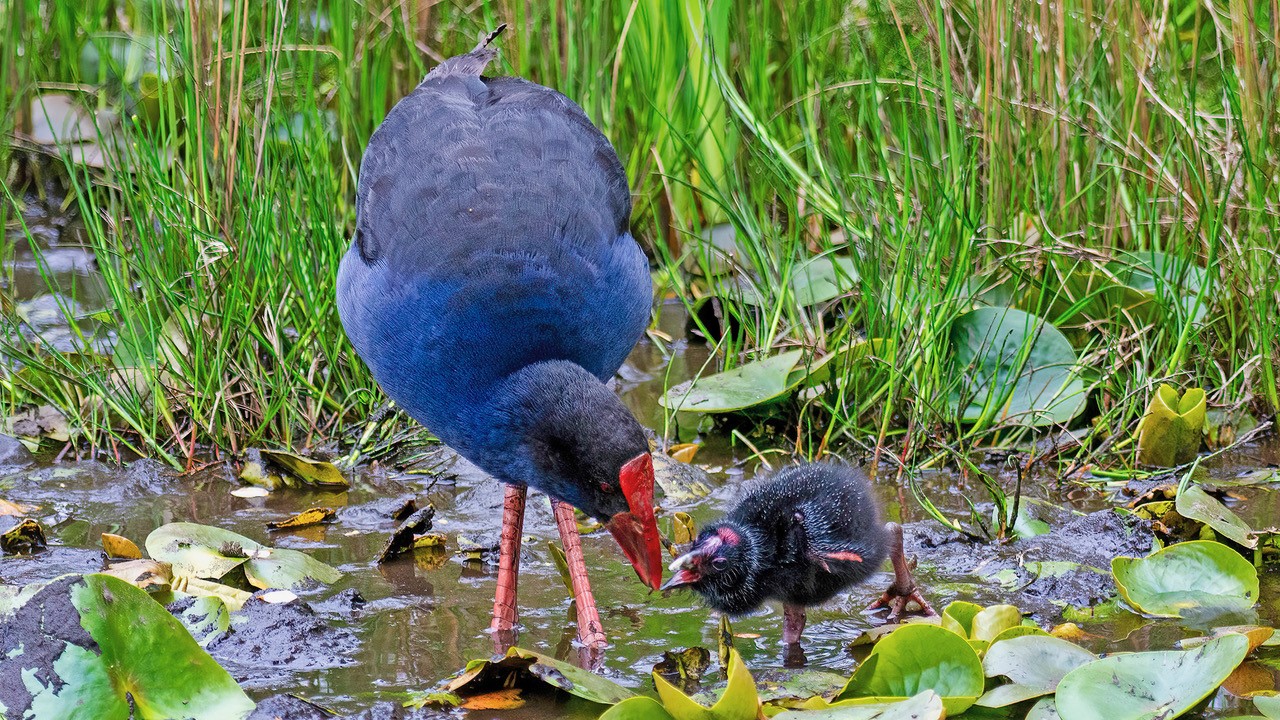 October 27: An adult feeding two chicks, unlikely to be the same adult and chick as in the previous photo.  The birds were now prepared to forage on land away from the security of the lily pond.  Note the size difference in the chicks.  This was the first appearance of a ‘runt’.  Both birds now sport rotund bodies, the consequence of an increasing plant diet – mostly the nutritious leaf bases of the mown lawn surface. 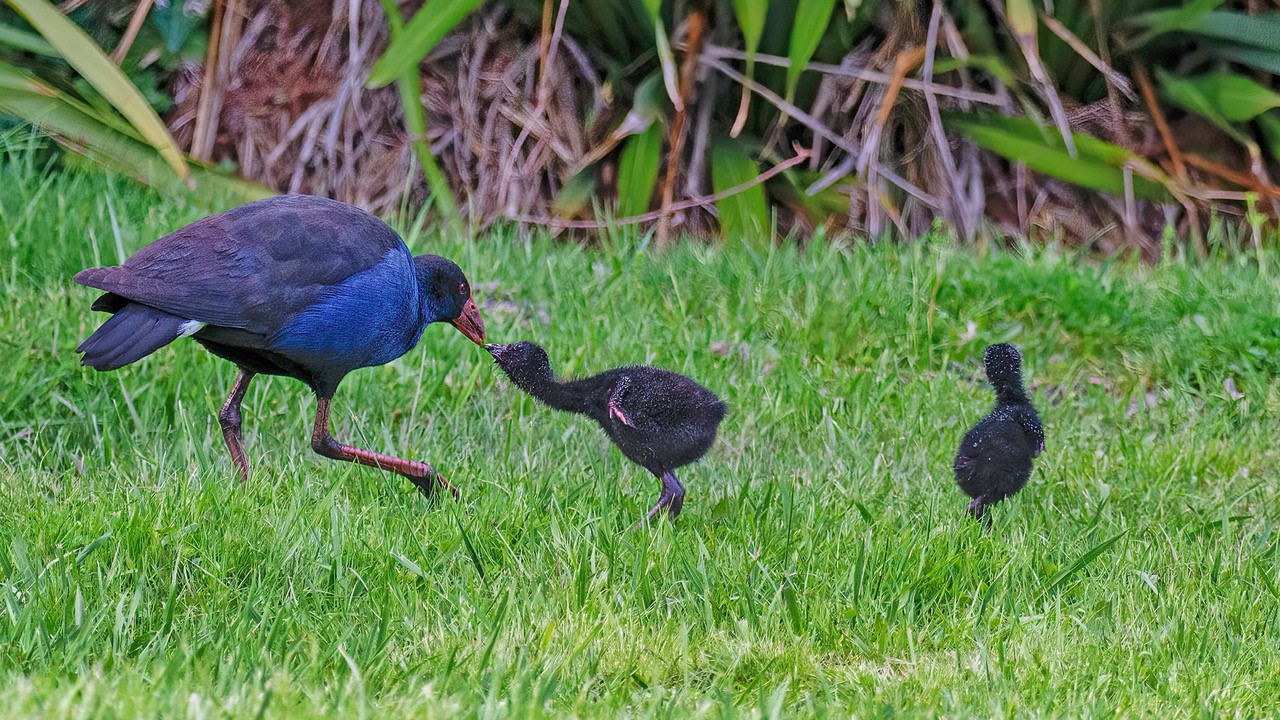 October 27: The feathers of the above ‘runt’ chick beginning to change in shape and size.  Note the reddish eyebrow that becomes much more prominent in the adult. 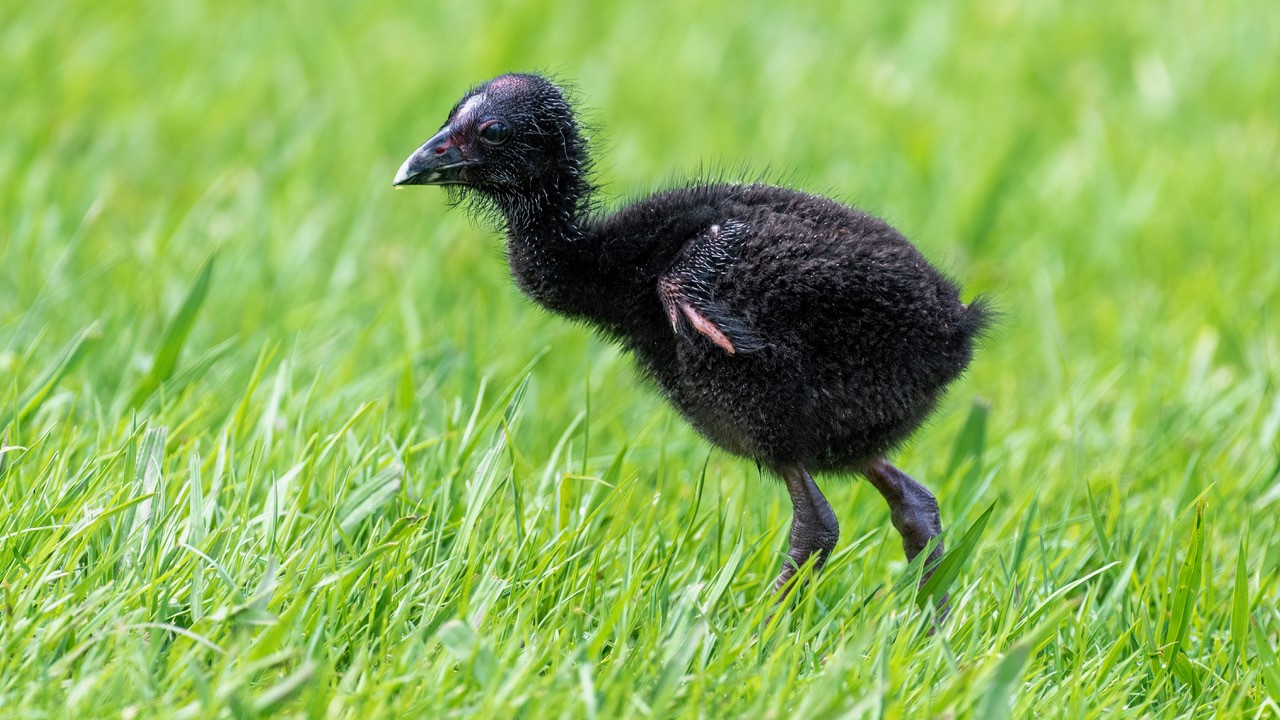 October 30: From whatever cause, becoming the runt in a family group obviously imposes a significant and lasting penalty in growth and development as shown by these two siblings. 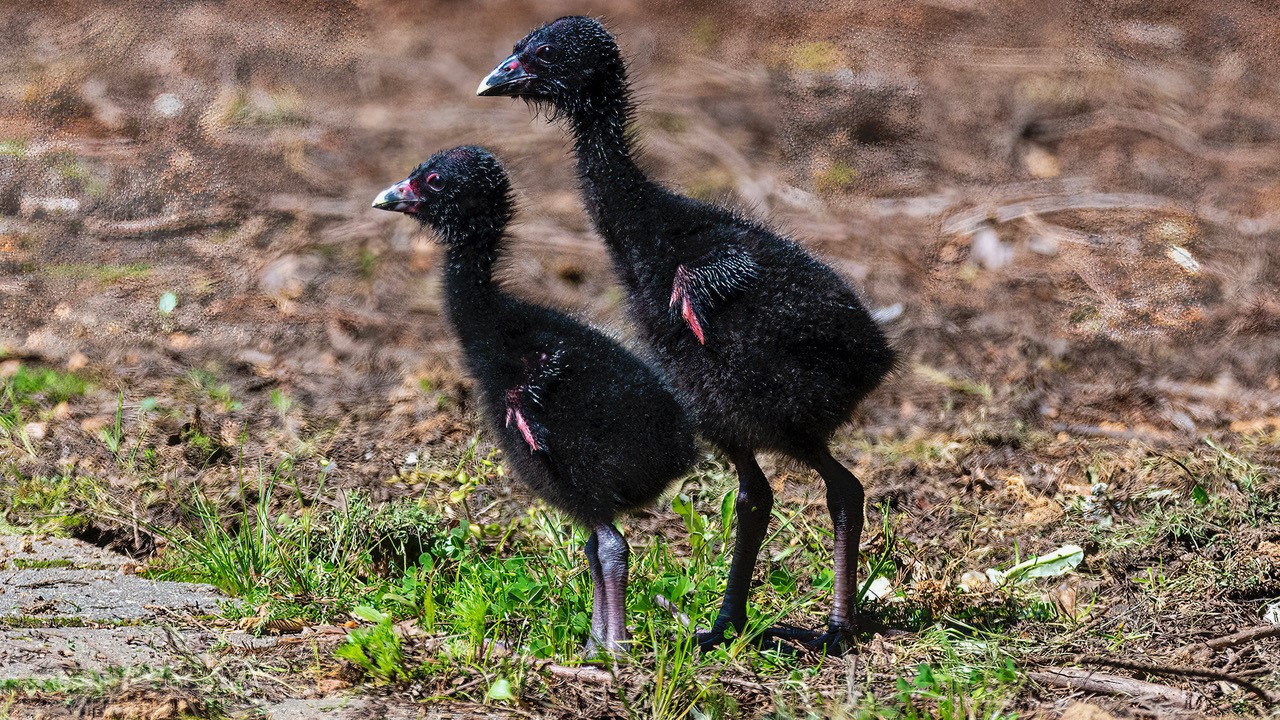 October 30: Another family group containing a runt chick (LHS), that was continually but unsuccessfully soliciting food by fluttering outspread wings.  However, bulkier siblings managed to keep it distant from the feeding adult, which ignored its requests for food. 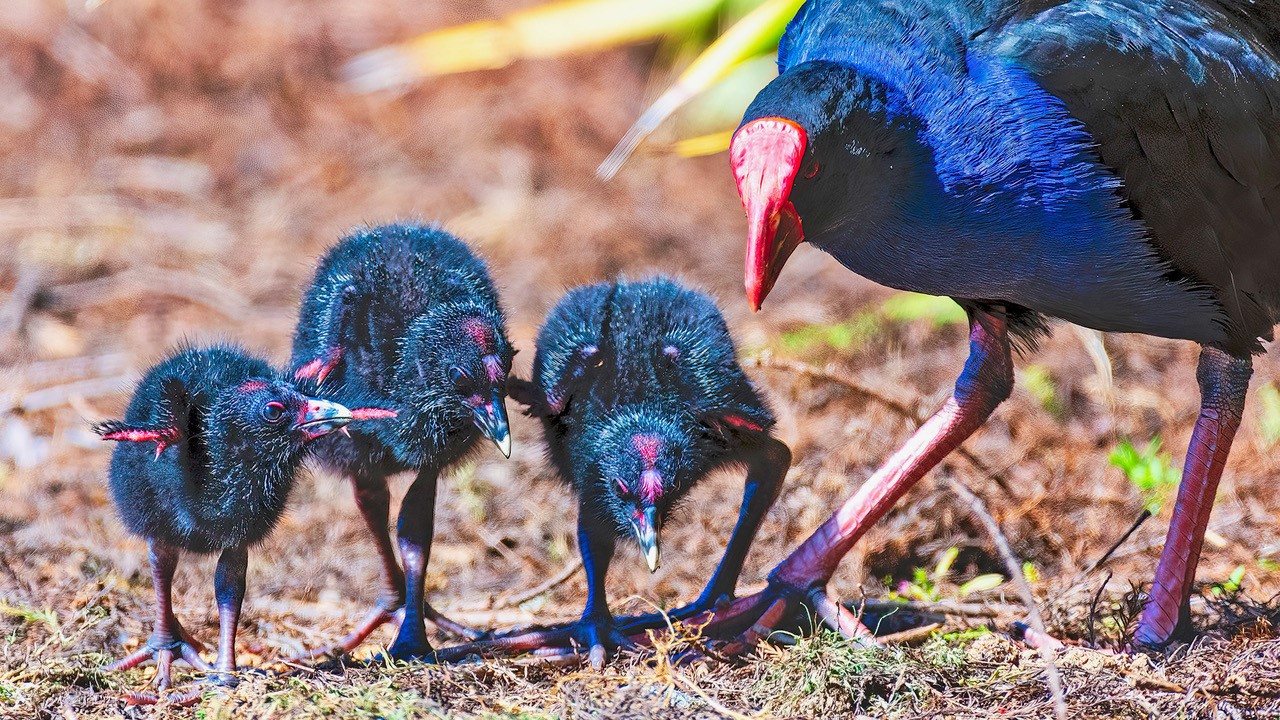 December 3: All the surviving chicks – now juveniles at about 3 months old – were beginning to grow and display their iridescent purple chest feathers but not yet the reddish beak, shield and legs.  These two are industriously scavenging a freshly dead rabbit, certainly killed by a deliberately released, biological control agent, Rabbit Haemorrhagic Disease Virus (RHDV).  While their beak shape is adequate for cutting and tearing the soft entrails and abdominal wall, the initial opener of the more resistant carcase would have been an ever-vigilant Australian raven (Corvus coronoides, aka “Crow”). 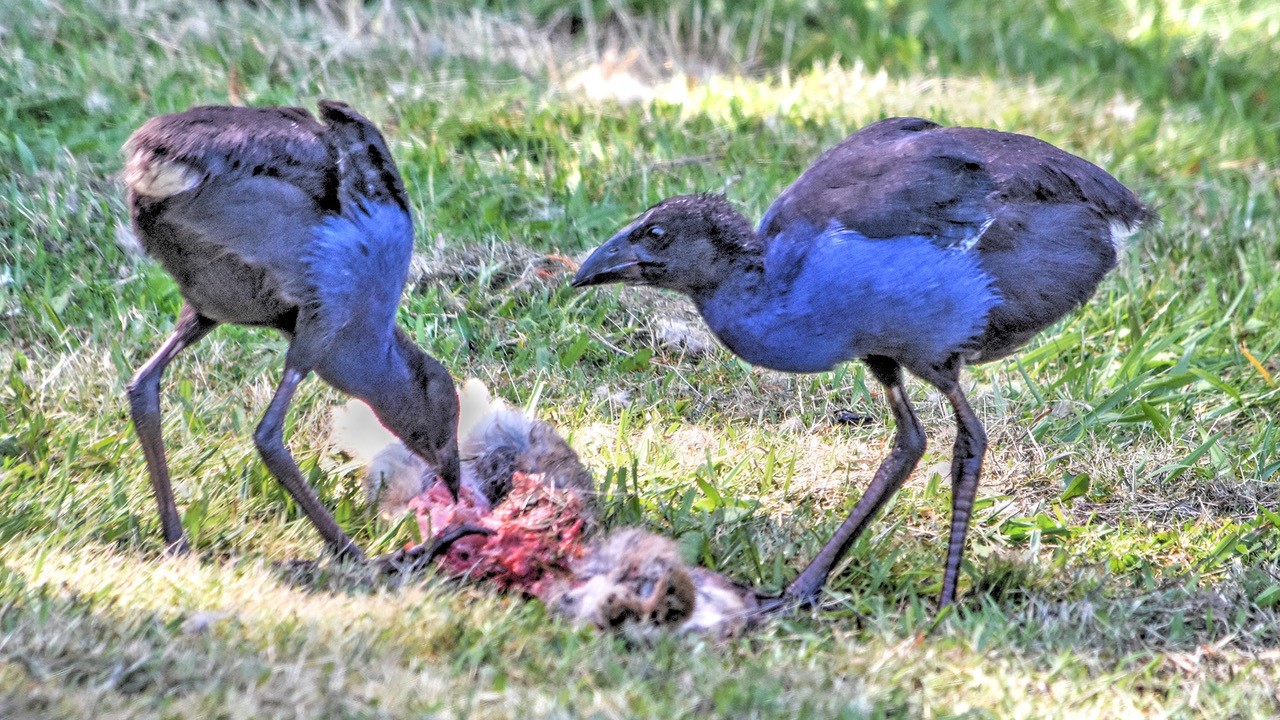 Because we could not uniquely recognise individual birds, we realise that while our interpretations are plausible, they are not definitive.  But we enjoyed making them and sharing them on this website.