We’ll have another post on gender today, but this time from NYT writer Pamela Paul, formerly editor of the book review but now an opinion columnist.  She mourns a time in her youth when gender stereotypes of male vs. female were suddeny oveturned by the 1972 book and album “Free to Be.  . . You and Me”, a project conceived by Marlo Thomas.  I remember well when it came out, and the criticism by the Right. Here’s a description from Wikipedia:

Free to Be… You and Me is a children’s entertainment project, conceived, created and executive-produced by actress and author Marlo Thomas. Produced in collaboration with the Ms. Foundation for Women, it was a record album and illustrated book first released in November 1972 featuring songs and stories sung or told by celebrities of the day (credited as “Marlo Thomas and Friends”) including Alan Alda, Rosey Grier, Cicely Tyson, Carol Channing, Michael Jackson, Roberta Flack, Shirley Jones, Jack Cassidy, and Diana Ross. An ABC television special, also created by Thomas, using poetry, songs, and sketches, followed sixteen months later in March 1974. The basic concept was to encourage post-1960s gender neutrality, saluting values such as individuality, tolerance, and comfort with one’s identity. A major thematic message is that anyone—whether a boy or a girl—can achieve anything.

In 2021, the album was deemed “culturally, historically, or aesthetically significant” by the Library of Congress and selected for preservation in the National Recording Registry. 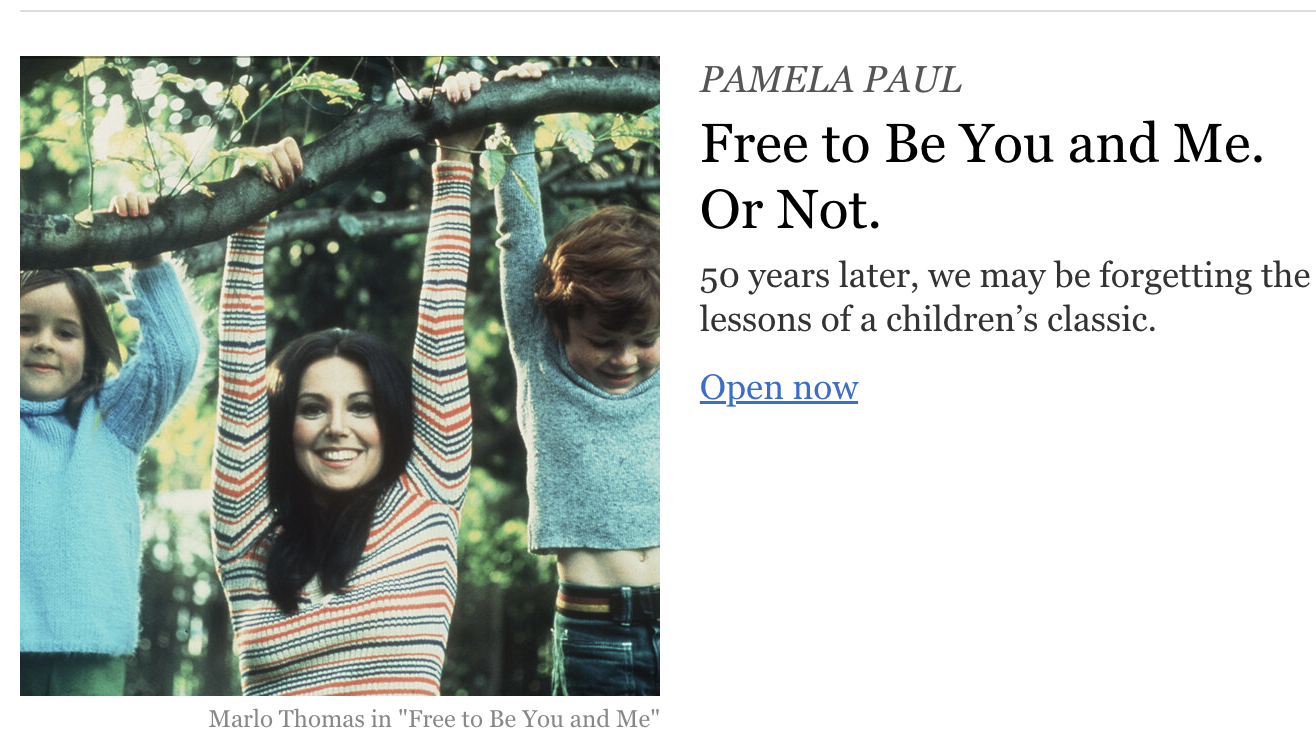 Paul rightly celebrates the achievement of the project in, well, making kids free to be gender nonconformists, not just in appearance or behavior but in the jobs people wanted. It was a time when women could contemplate being cops, firefighters, and many of the professions deemed “men’s jobs”.

If you grew up in any remotely liberal enclave of America in the 1970s or 1980s, you grew up believing a few things.

You believed that you lived in a land where the children were free, where it didn’t matter whether you were a boy or a girl because neither could limit your choices — not when you were a kid, not when you grew up. You believed it was perfectly fine for William to want a doll and if you were a girl, you might have been perfectly happy for him to take yours.

You believed these things because of “Free to Be … You and Me.” That landmark album, which had its 50th anniversary last month, and its companion book shaped a generation. It took the idealism and values of the civil rights and the women’s rights movements and packaged them into a treasury of songs, poems and stories that was at once earnest, silly and wholeheartedly sappy. It was the kind of thing a kid felt both devoted to and slightly embarrassed by. The soundtrack got stuck in your head. The book fell apart at the seams.

. . . “Free to Be” unshackled boys and girls from these kinds of gender stereotypes. As Pogrebin wrote in the book’s introduction, “What we have been seeking is a literature of human diversity that celebrates choice and that does not exclude any child from its pleasures because of race or sex, geography or family occupation, religion or temperament.” For what now seems like a brief moment, boys and girls wore the same unflattering turtlenecks and wide-wale corduroys. Parents encouraged daughters to dream about becoming doctors and police officers. Boys were urged to express feelings. Everyone was allowed to cry.

Then Paul describes pushback, first from the Right, which abhorred its message that women didn’t have to know their place. Then from the capitalists, which profited from making gender-specific toys that the project said forced kids into stereotyped play behavior (“socialization” was profitable).

But then Paul, who is an antiwoke liberal like me, indicts “progressivism” as well for the pushback! (my emphasis below).

Some of it stemmed from ongoing conservative resistance to feminism’s gains. Some of it was about money. And some it of it emerged from a strain of progressivism that has repurposed some of the very stereotypes women and men worked so hard to sweep away.

Wait a tick! What strain of progressivism pushes back against gender stereotypes? Even the most progressives of progressives, it seems to me, break the “male/female” stereotypes by assuming one of a hundred or more genders. Isn’t that a form of freedom?

Now we risk losing those advances. In lieu of liberating children from gender, some educators have doubled down, offering children a smorgasbord of labels — gender identity, gender role, gender performance and gender expression — to affix to themselves from a young age. Some go so far as to suggest that not only is gender “assigned” to people at birth but that sex in humans is a spectrum (even though accepted science holds that sex in humans is fundamentally binary, with a tiny number of people having intersex traits). The effect of all this is that today we are defining people — especially children — by gender more than ever before, rather than trying to free both sexes from gender stereotypes.

The first link goes to an Atlantic article by Conor Friedersdorf criticizing the acculturation of children into “woke” gender dogma before they can think for themselves. And yes, children shouldn’t be forced to adopt gender labels coined by adults. And yes again, Paul is right that sex is binary (and thanks for the link, Ms. Paul!). But I’m not exactly sure what her beef is here. Children who don’t feel they fit the male/female stereotype can assume any sex role they wish, and progressives say we must respect that. You may think that some of those identities, or their acculturation by the young, or the authoritarianism that urges kids into new identities—that all this is bizarre and sometimes irrational. But none if it seems to me to be a restriction of freedom. The message of multiple gender identities seems to be the same as that of Marlo Thomas: “You’re free to be what you want to be.”

Now maybe I’m missing the message here, and it’s unusual for me to defend “progressives” so much, but I’m not sure what’s at issue.

At the end, Paul seems to conflate the “restrictions” that, she says, gender identities impose upon kids with the restricted freedom kids have to roam. And here I agree with her:

As for that land where the children run free, there is little running around now. Despite efforts at free-range parenting, kids tend to be hovered over at all times: In school by surveillance systems like GoGuardian and ClassDojo and the parent portal. In their free time, by the location devices built into their smartwatches and phones. At home, by nanny cams and smart devices. And the children probably are home, socializing on their screens rather than outside riding a bike or playing kick-the-can until someone yells “Dinner!”

Yes, when I grew up, after I came home from elementary school, I’d hop on my bike and go meet my friends, with only the restriction that I’d be home for dinner. These days a parent could probably get arrested for that. There is too much hovering, and since free-roaming kids are safer than ever, it’s unnecessary.

At the end Paul urges parents and kids to open the book and listen to the album again, for “winding the clock back a little [to 1972] would actually be a real step forward”.  She’s right about the helicopter parenting, but I don’t get her point about different genders putting kids back in the old gender-stereotype boxes.

22 thoughts on “Pamela Paul on the breaking of gender stereotypes, and how both Left and Right push back”