Meet Leslie Elliott, who’s studying to get a degree in mental health counseling at Antioch University in Seattle, part of the Antioch University system that includes the famous Antioch College in Yellow Springs, Ohio, famous for its radicalism. Apparently the Seattle school is also pretty woke, as you can judge from Elliott’s eight-minute video below, where she describes the horrific ideological “training” that passes for training in mental health therapy at Antioch.  Elliott’s still a student, and near graduation, but according to the video and an article at wng.org (excerpted below), she might not finish because she won’t sign an ideological pledge about social justice.  Elliott also works at a counseling service as a Holistic Wellness Coach and Consultant. She adds that she’s a “political liberal,” and I don’t doubt it. Someone who wants to go into non-M.D. psychotherapy is someone who wants to help people, not make money.

Leslie Elliott only has a few more courses to take in the graduate clinical mental health counseling program at Antioch University in Seattle before she can become a licensed clinical counselor. Yet she does not see how she can continue in the program because it is requiring her to endorse a “civility pledge” which violates her conscience. She is on a leave of absence to explore her administrative and legal options.

The pledge, which Elliott says is now included in most syllabuses, reflects the social justice mission of Antioch. It states: “I acknowledge that racism, sexism, heterosexism, classism, ableism, ageism, nativism, and other forms of interpersonal and institutionalized forms of oppression exist. I will do my best to better understand my own privileged and marginalized identities and the power that these afford me.” Antioch added the statement starting in 2020 after the death of George Floyd.

For Elliott, the offense came when the first assignment in one of her required courses was to affirm the pledge by rewriting it in her own words and stating her agreement. “That really felt like a purity test to me,” she said. “I felt compelled to confess to this worldview that sees myself as an intersectional group of identities that have privilege and marginalization attached to them, and I don’t agree with this framework. It feels like a theology, and it’s not my theology.”

A political liberal, Elliott knew social justice was a core tenet driving the ethical standards of the program when she entered it. But she soon learned that her idea of social justice was very different from that of her professors and administrators. To Elliott, social justice meant striving to provide access and opportunity and eliminating exploitation and unfairness when possible. “It seemed like a beautiful ideal you would find in most world religions and most positive philosophies,” she said.

But she found the teachings at Antioch opposed her beautiful ideal. Her professors and administrators viewed social justice as a critical lens through which Western society must be viewed to deconstruct cultural norms and values rooted in white supremacy, racism, and oppression of marginalized people. She believes this conceptualization of social justice is socially destructive and an anti-resilience philosophy.

The video below recounts a training designed to turn all mental-health counselors into social-justice advocates who turn all interactions involving therapy into issues about race. Counselors are also trained to place also people with gender issues onto a transitioning track, i.e., they’re trained in “affirmative therapy.”

Granted, this is one person’s take, but you have to admit that she’s courageous in taking on not just her university, but the very program that’s purporting to train her but in reality is indoctrinating her.  Still, all this description can’t match what she actually describes below.

The site also shows a response from Antioch sent to all students in the college—save Elliott (what a rookie move!)—implicitly singling her out for promulgating “white supremacy” and “transphobia”. Here we have the college acting like an online social-justice mob. The author of the college’s email, and presumably at least part of the “Commitment to Social Justice” statement, is Shawn Fitzgerald, CEO of Antioch’s Seattle campus and Dean of the Graduate School of Counseling, Psychology, and Therapy.

Clearly the “one person who posted online” is Eliott, who stands accused of transphobia, white supremacy, and “harmful ideologies”, as well as “hate speech”. The statement was certainly inspired by Elliott’s making the video above.  Eliott has posted another video detailing what’s below and giving her response.

The video above was posted about a month ago, while the statement issued by the College seems to be dated October 27—notlong after Elliott put up the video. 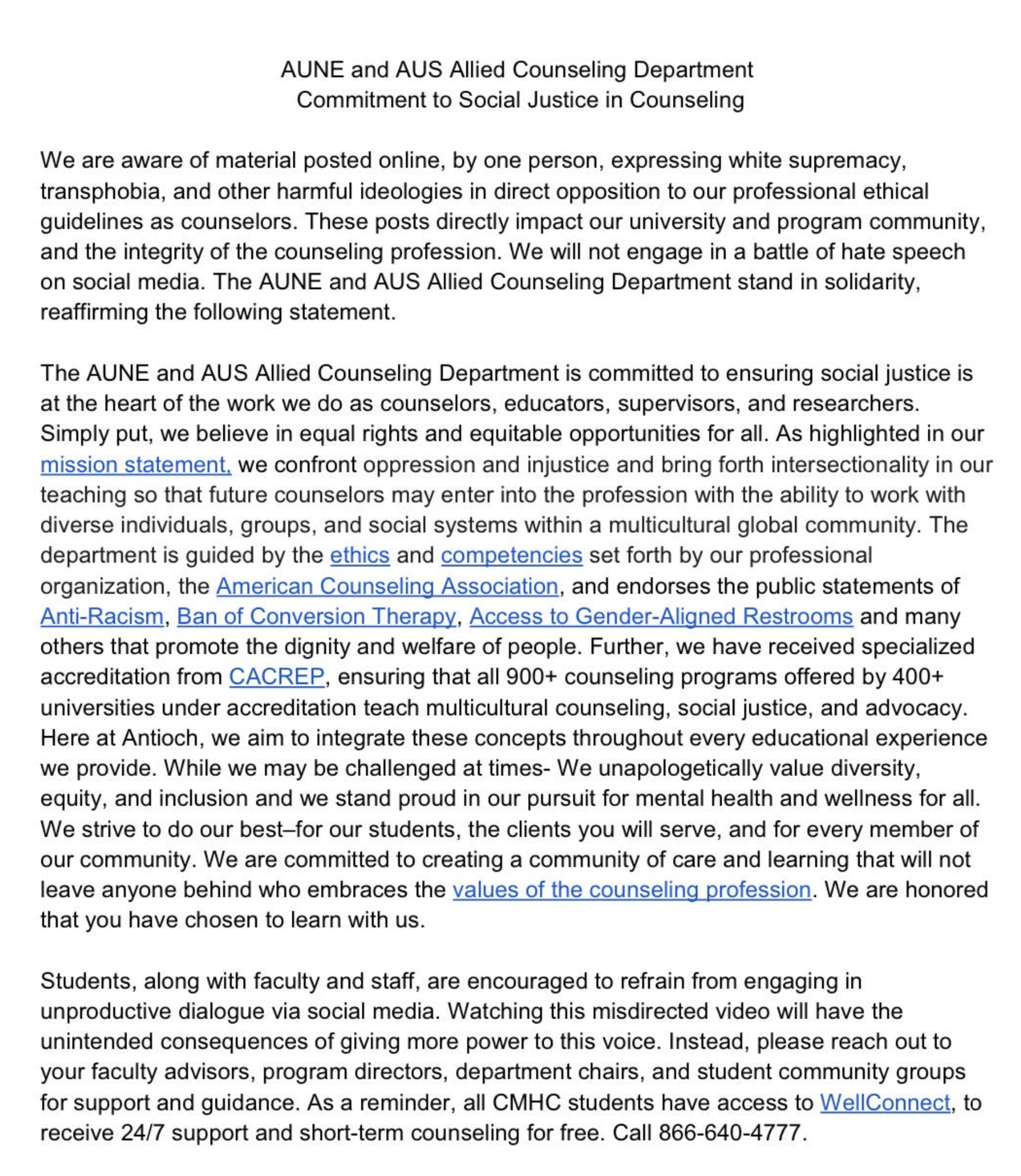 Elliott also has a Substack called “The Radical Center“. On it she’s published her response to Antioch’s “Position Statement” and its invitation to continue her coursework. I’ve put that response below. Elliott’s letter to officials at Antioch asks that the school refrain from retaliating against her (what’s above is simple retaliation) and affirming that she will continue speaking out and exercising her freedom of speech. 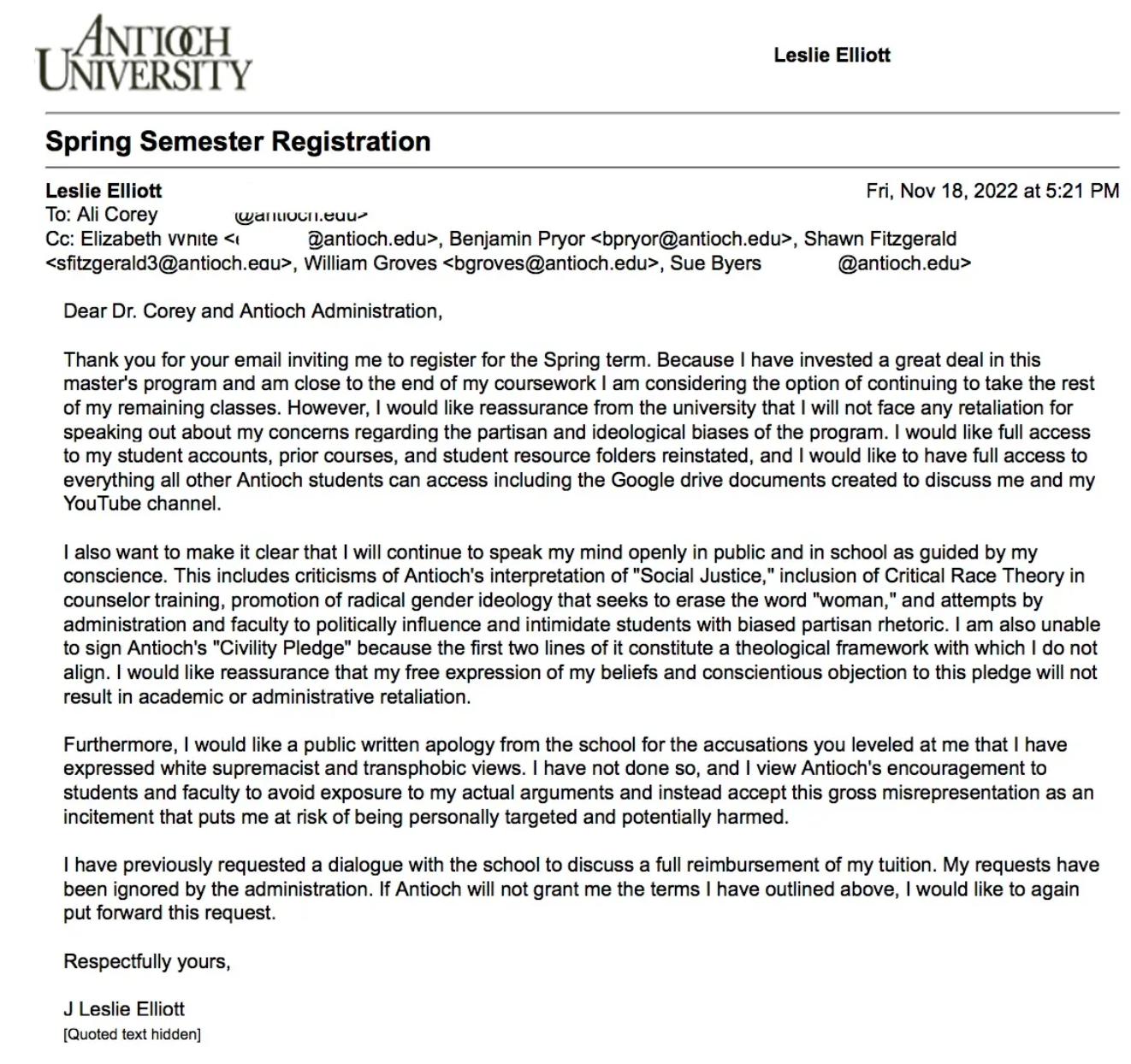 Here’s an hourlong interview of Elliott by “Martin’s Daughter”. I found it only this morning, so I’ve watched only snippets.