Today we have another text-and-photo biology lesson from Athayde Tonhasca Júnior, whose text is indented below. Click on the photos to enlarge them.

Just can’t wait to get on the road again

The publication of On the Origin of Species is 1859 is unquestionably one of the most significant episodes in the history of science. Charles Darwin’s and Alfred Russel Wallace’s theory of evolution by natural selection caused such a commotion that one of the book’s other idea didn’t get much attention at the time of publication. For one thing, Darwin dedicated a little over one page to it: the suggestion that evolution is not always the product of a struggle for existence, but sometimes is driven by sexual selection. Or, in Darwin’s own words, by ‘a struggle between the males for possession of the females’.

Darwin was stumped by the fact that natural selection could not explain obvious differences between males (producers of many small reproductive cells or gametes – the sperm) and females (producers of fewer, larger gametes – the eggs) of many creatures. Why should it be that male lions have manes, male deer sport massive antlers, many male birds are endowed with bright and colourful plumage, while their female counterparts have none or subdued versions of those features? Even worse, some characteristics appear to hinder survival and thus cannot be explained by natural selection. Darwin vented his vexation in a letter to American botanist Asa Gray: ‘the sight of a Peacock’s train whenever I gaze at it makes me sick’.

This Indian peafowl‘s (Pavo cristatus) covert feathers (its train) would be tricky if the bird were chased by a tiger in its native Indian forest © Paul Lakin, Wikimedia Commons: 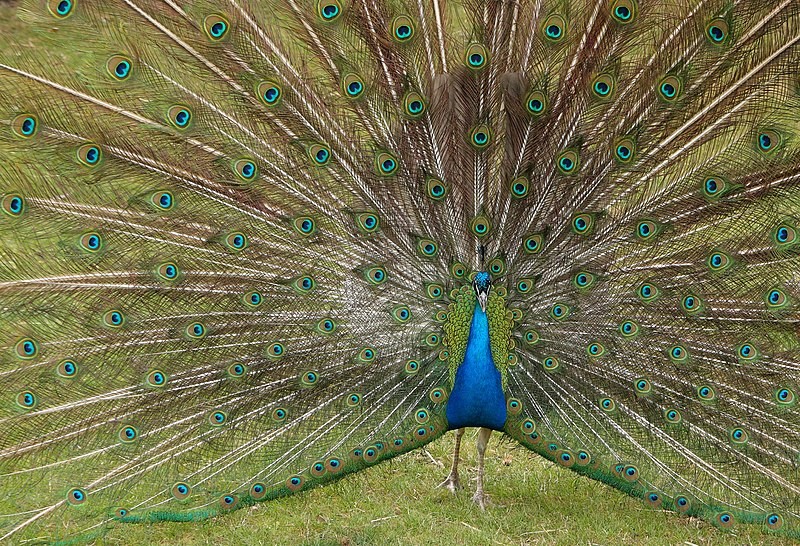 But Darwin’s aggravation didn’t last long, as he elaborated the theory of sexual selection in a subsequent book: The Descent of Man, and Selection in Relation to Sex (1871). In it, he suggested that features in some individuals (males or females) give them advantages over individuals of the same sex solely in respect of reproduction, even though these features could be disadvantageous for survival.  For psychologist Geoffrey Miller, ‘natural selection is about living long enough to reproduce; sexual selection is about convincing others to mate with you’.

[JAC:  A note for readers: many biologists, including me, see sexual selection as a subset of natural selection; both involve repeatable, differential reproduction of gene variants based on the effects they have on their carriers (“vehicles”)]

In The Descent of Man, Darwin wanted to provide evidence that evolutionary principles – including sexual selection – apply to humans. This cartoon from Fun magazine (1872) mocks his ideas. The caption reads: That Troubles Our Monkey Again – female descendant of Marine Ascidian: “Darwin, say what you like about man; but I wish you would leave my emotions alone“:

Sexual selection would work in two ways: through direct competition between males (or less commonly between females), so that contestants become larger and acquire showy ornaments or weaponry, or by female choice (or less commonly by male choice), where mates are chosen based on their perceived quality as parental material. In the case of peacocks, a female would choose a male with the most flamboyant train, which indicates vitality, health, survival skills, and so on. And by showing off his colourful appendage, the male signals to the female that her offspring would have a better chance of survival if he was their daddy.

A figure from The Descent of Man, depicting a male (top) and a female of the suitably named Atlas beetle (Chalcosoma atlas): 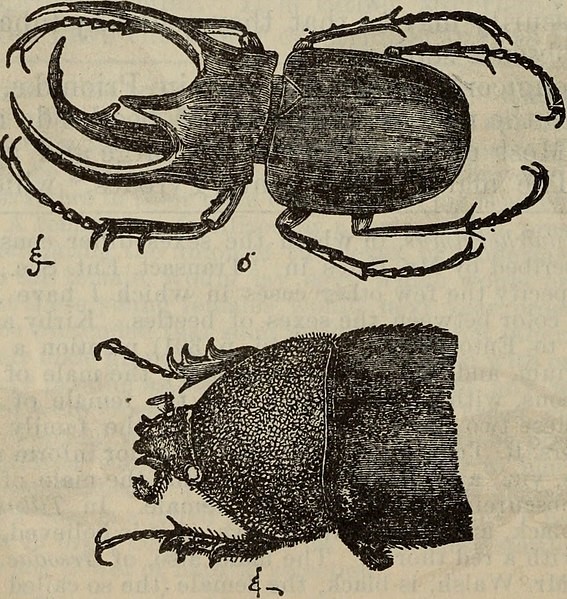 For many invertebrates, females are larger than males, possibly because females need to produce lots of eggs and defend their brood; for birds and mammals, size is biased towards males, a likely result of intra-male competition. L: Female (left) and male banana spiders (Argiope appensa) © Sanba38; R: A male northern elephant seal (Mirounga angustirostris) towering over a female and a pup © Mike Baird, Wikimedia Commons: 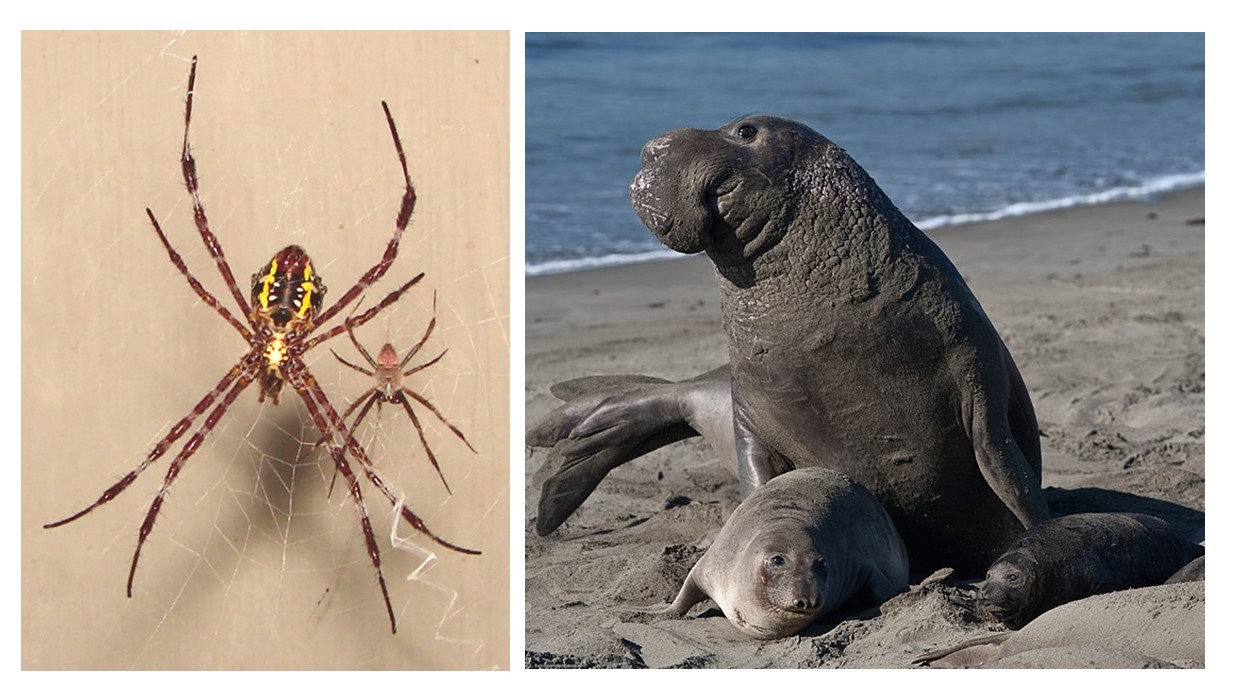 Sexual dimorphism is one of the most pervasive traits in some plants and many animals, and its consequences are far and wide. For us humans, besides the obvious dissimilarities in size, muscle mass and fat distribution, men and women differ in the risk of contracting some diseases, absorption of drugs, response to therapies and vaccination, and so on. That’s why health researchers are increasingly being required to distinguish the sex of their subjects in clinical trials (e.g., Willingham, 2022).

Naturally, sexual dimorphism is found in bees as well, and it is manifested primarily in their haplodiploid system of sex determination, where unfertilized eggs result in males and fertilized eggs result in females. But bee dimorphism is also expressed in a range of traits such as body size, morphology, coloration, physiology and behaviour, all attributes linked to the roles played by each sex for the species’ survival. Females take care of nest construction and brood provision; in the case of social species such as honey bees (Apis spp.) and bumble bees (Bombus spp.), they maintain and defend the nest. Males on the other hand are driven by one main objective: to seek females and mate with them. So they have no pollen-carrying structures or stingers. This rather narrow life plan has not helped the reputation of males, which have been labelled lazy, free-loading sperm donors. But drones (male honey bees) help with maintaining a hive in good order, and males of many species are better pollinators then their female counterparts.

Hind legs of a male (L) and a female bee, which has a scopa – a cluster of stiff hairs to harvest pollen © Chelsey Ritner, Exotic Bee ID, USDA: 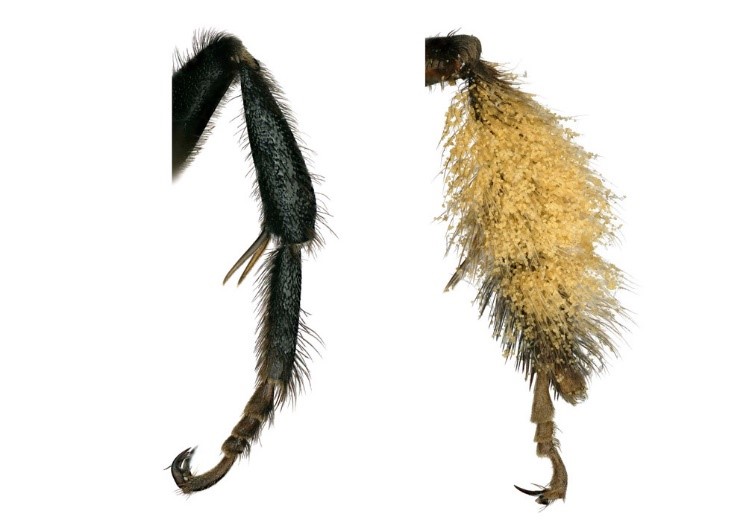 Males of many bee species have another trait, one that could be essential for protecting the species against habitat disturbances: they are hopeless wanderers.

Most bees are solitary (each female builds her own nest) and philopatric, which is the tendency to stay in or return to the site of their origin. Females prefer to nest near the place of their birth because food or good nesting sites could be scarce elsewhere – why take chances with the unknown? This tendency to stay put may result in huge nest aggregations (e.g., the alkali bee, Nomia melanderi). But philopatry induces inbreeding, which doesn’t bode well for the population future. Males, however, who do not have a home or offspring to care for, can fly away in search of a mate outside the old, boring neighbourhood. Sexual attraction is governed by pheromones, and males of some species such as the vernal colletes (Colletes cunicularius) show a preference for scents produced by females from different populations (Vereecken et al., 2007). 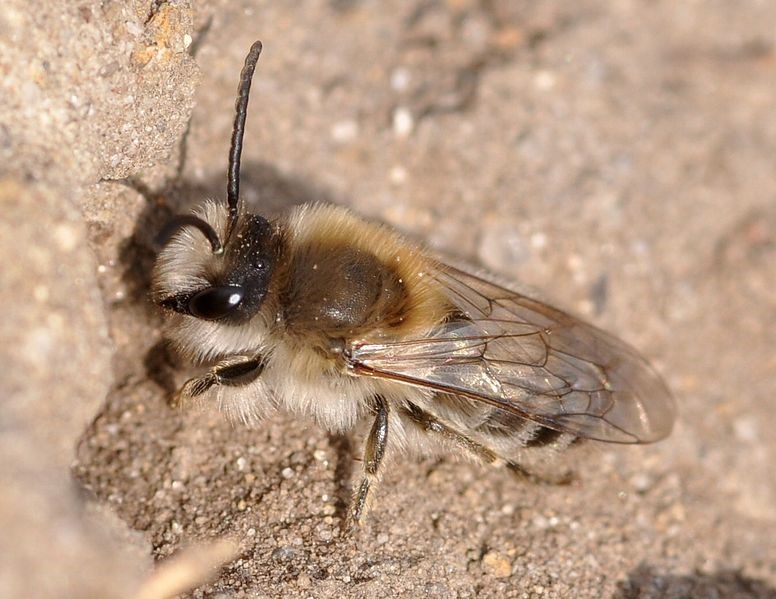 The sugarbag bee (Tetragonula carbonaria), a stingless species endemic to Australia, demonstrates males’ dispersing capabilities. They roam an average of 2-3 km from their nests, more than twice the female range, to find a mate; some males cover 20 km, about 30 times the females’ range (Garcia Bulle Bueno et al., 2022). By dispersing over great distances, males are bound to transfer genetic material from one population to another, which is especially important if the species’ habitat has been fragmented by human activity. 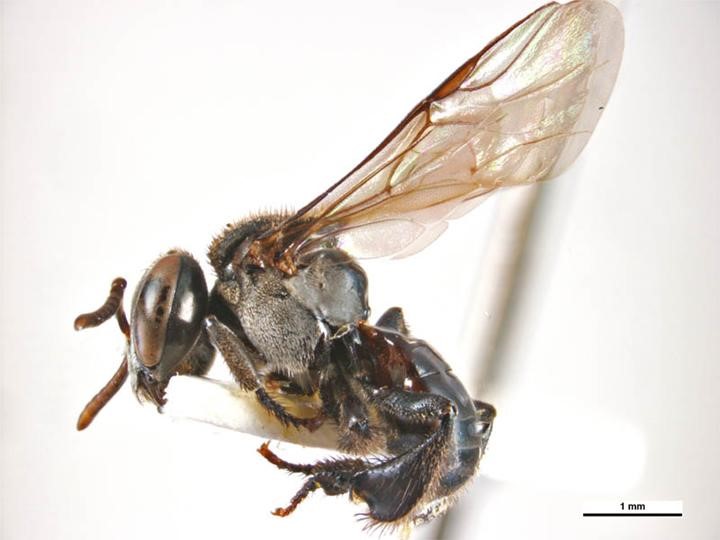 The role of male dispersal in reducing the effects of inbreeding was inferred from the genetic structure of populations of the oddly named unequal cellophane bee (Colletes inaequalis) in an urban/suburban habitat in New York, USA (López-Uribe et al., 2015). This bee is solitary, but females nest close to each other in aggregations of up to 100 nests/m2. Sampled bees had greater genetic similarity within nest aggregations than bees chosen at random, an expected consequence of philopatry. But there were no signs of inbreeding among the 11 nest aggregations spread over approximately 40 km2, an indication of genetic exchanges between them. And there’s more: within nest aggregations, females were genetically more interrelated than males, a sign of sexually biased migration rates. These DNA analyses elegantly suggest that males are the main arbiters of genetic flow among unequal cellophane bee populations.

A female unequal cellophane bee at the entrance of her nest. B: A nest aggregation © López-Uribe et al., 2015.

Sexual dimorphism has been largely attributed to intra-species competition, often in the form of males fighting each other for a female or to be chosen by one. But sexual dimorphism has a cooperative side: it allows males and females to specialise in what they do best, be it caring for the young, finding food, defending territory, and so on. In the case of bees, males do their bit by gallivanting around. And that results in a reduction in the degree of inbreeding in the species.