This new article comes from the American Military News, and reports that the Biden administration intends to continue a policy enacted under a previous administration (it doesn’t say which administration). The policy, announced by the Selective Service in the first tweet below, requires that all biological males, regardless of gender, must register for the Selective Service, conferring eligibility for being drafted into the military. In contrast all biological females are exempt from registration, whether or not they are transsexual or transgender.

The article seems fairly neutral, though it does show responses (also below) from some biological males who to evade the draft by declaring themselves female.  As far as I know, the Biden administration’s policy toward’s one’s gender is that whatever sex (or gender) you declare yourself, regardless of your biological (birth) sex, then that is the sex you are seen to belong to. (This apparently applies to sports participation as well.)

The screenshot below is from the official chart of who is required to register for the Selective Service (click to see the whole thing):

Note that this not only accepts the notion of a binary system of sex at birth, but also says you have to register for the draft (“yes”) if you’re a transsexual (or transgender) female, but you don’t have to (“no”) if you’re a transsexual or transgender male. In other words, all biological females are exempted from the possibility of being drafted into the military, but all males must register for the Selective Service, making them eligible for the military draft. (Right now the U.S. isn’t drafting anyone.)

And there’s the clarification below, also issued by the Selective Service, implying that changing one’s gender from that assigned at birth (I’d say “recognized” at birth) need not involve any medical intervention but simply declaring a “self identification” different from one’s biological sex. If that is the case, we can expect to see a spate of changes in self-identification of biological males. (Click to access.) 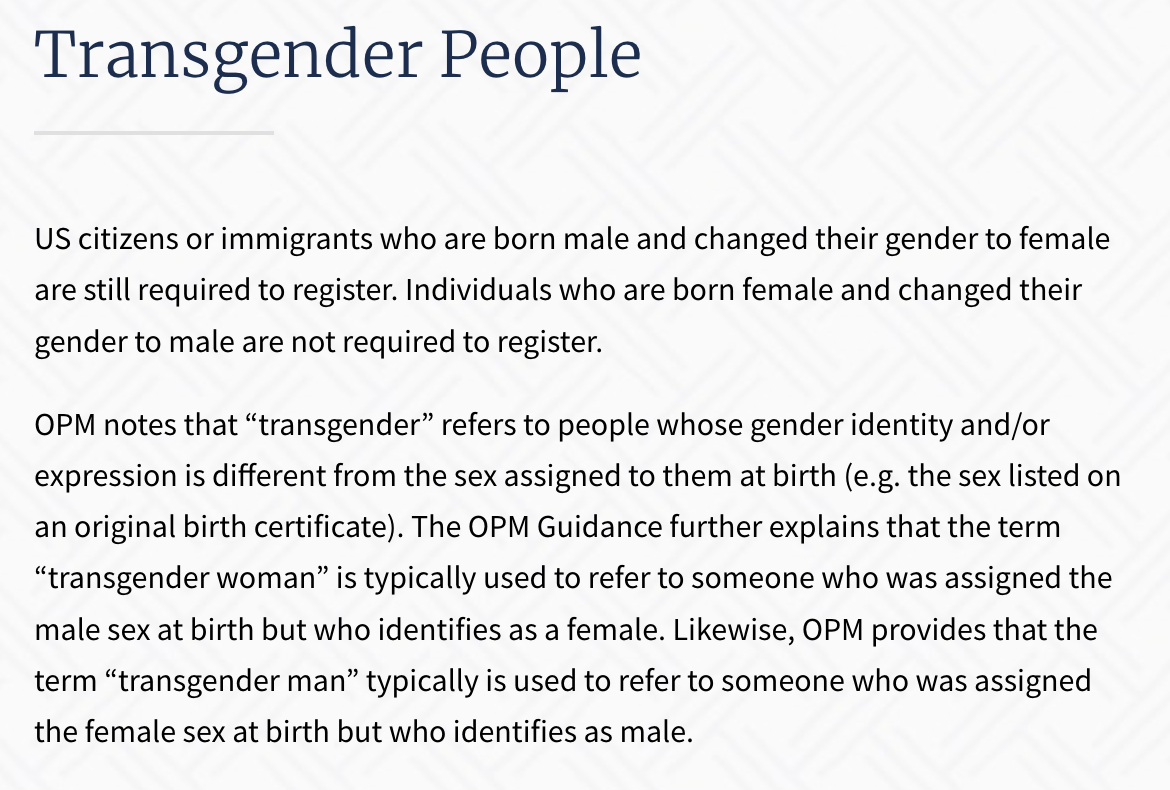 To be sure, the article above adds this:

While the Biden administration still treats transgender women as males when it comes to the currently male-only military draft, the administration has also voiced support for including women in the draft.

Last year the White House said it supports including all women in the draft around the same time the House and Senate Armed Services Committee leaders agreed to remove a provision requiring women to register for the Selective Service from the National Defense Authorization Act.

“The administration supports section 513 and the registration requirement for all citizens, which further ensures a military selective system that is fair and just,” the Biden administration said in a Sept. 21, 2021 statement of administrative policy.

I agree as well: there’s no reason why anyone who is fit enough to serve, whatever gender or sex they be, should not register with the Selective Service. I did register for the draft, but as a conscientious objector, and I would have gone to jail rather than fight had I not been awarded CO status. While there are some wars I might serve in (likely as a medic), I can understand if some people don’t want to kill others or die in a war that doesn’t make sense.  The way to do that is not a false declaration of gender but seeking CO status, a status that is still offered (it used to be solely on religious grounds, but now “moral” grounds are acceptable). While  I was not religious and would not pretend to be, I did have to talk to various rabbis and chaplains for them to testify that my moral objections were equivalent to religious ones. I also got letters from my father and other military men supporting my objections to war.

That should anger trans activists because their mantra is “trans men are men and trans women are women.”  The general dictum is that one’s assumed gender identity entitles one to be treated as a full member of the biological sex with which they identify. (This excepts those who are neither of male nor female gender, which the article doesn’t discuss.) But this doesn’t apply to Selective Service registration, for which transwomen are treated as men and transmen as women. Will we see objections to this from the ACLU and other activist organizations? I have no idea, nor do I have a dog in this fight.

What will clearly happen if a military draft and a war is impending, however, is that we’ll get a spate of gender changes, but only in one direction: biological men —> transgender women. That’s indicated in the two responses below to the Selective Service’s tweet:

My son's a girl now so we good

For the purpose of SSS my son will identify as a girl starting with his 18th birthday.

Below, J. K. Rowling also weighs in pointing out what seems to be hypocrisy. I have to say, though, that it seems worse to claim a female identity to get sexual access to women and girls (she is probably referring to prisons) than to avoid registering for the draft.