Today we have pictures of moss from Richard Gern. His captions are indented, and you can enlarge the photos by clicking on them.

These are tourist pictures from a trip to Berlin three and a half years ago; they are from a visit to Potsdam and the Neues Palais, or “New Palace”, the summer home of Frederick the Great.

The palace is an eye-popping and impressive sight. I’ve never seen so many statues in my life!

Something in addition to the architecture and artwork also caught my eye–small patches of moss growing on the stone balustrade in back of the building! What first grabbed my attention was what looked like long skinny hairs growing from the moss, but when I started taking pictures it began to look like there were three types of moss. I didn’t give it much thought until a few weeks ago when I opened up the file to edit the photos; each type of moss always seemed to have a bit of another type among it, so I got the idea that maybe they were all the same type, but just in different stages of growth. I sequenced the pictures to illustrate what I though was a progression from a soft green moss to something that looked like sprouts, and then to the sprouts drying out and forming small stalks that then grew into the longer hair-like elements. 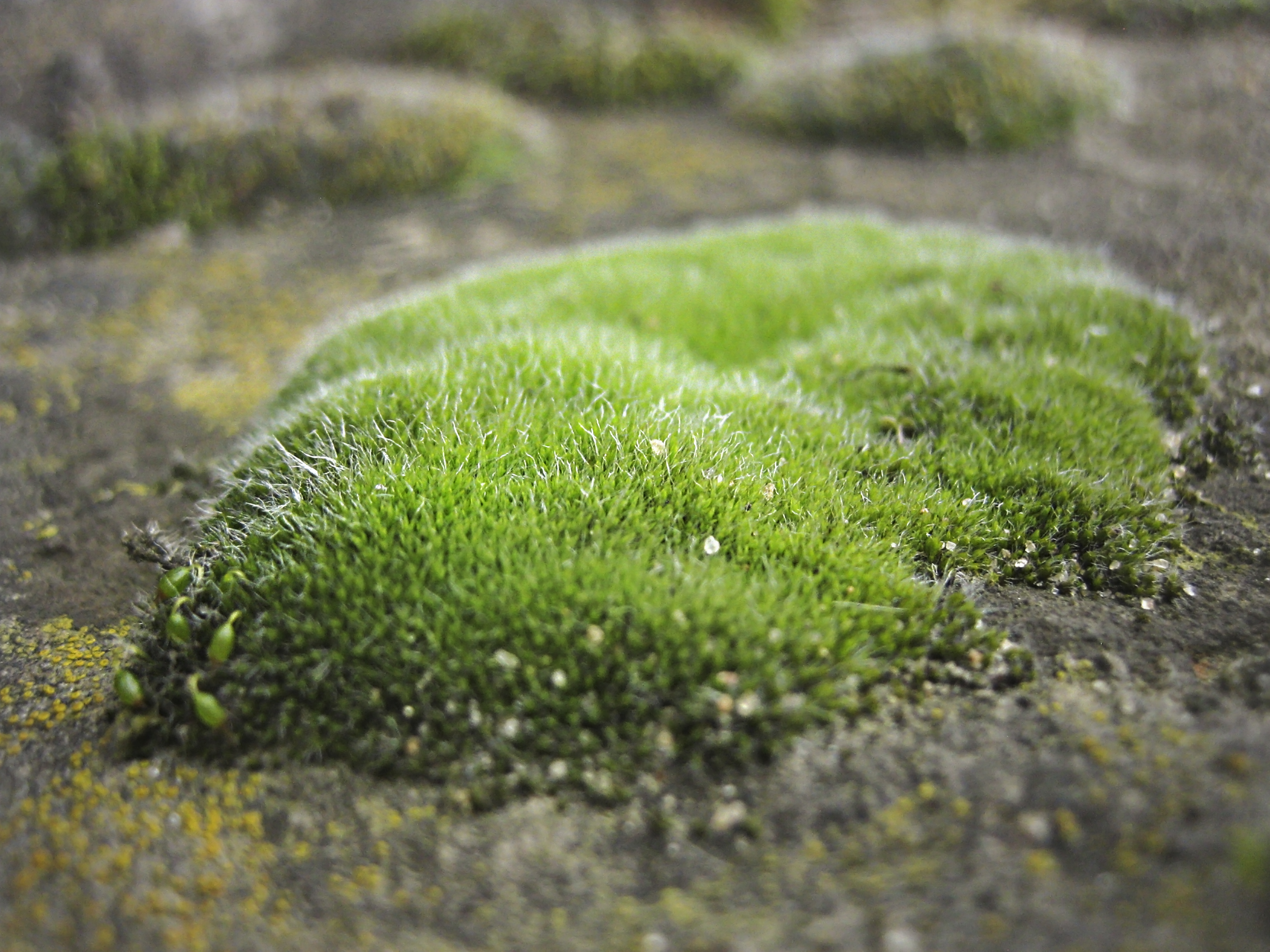 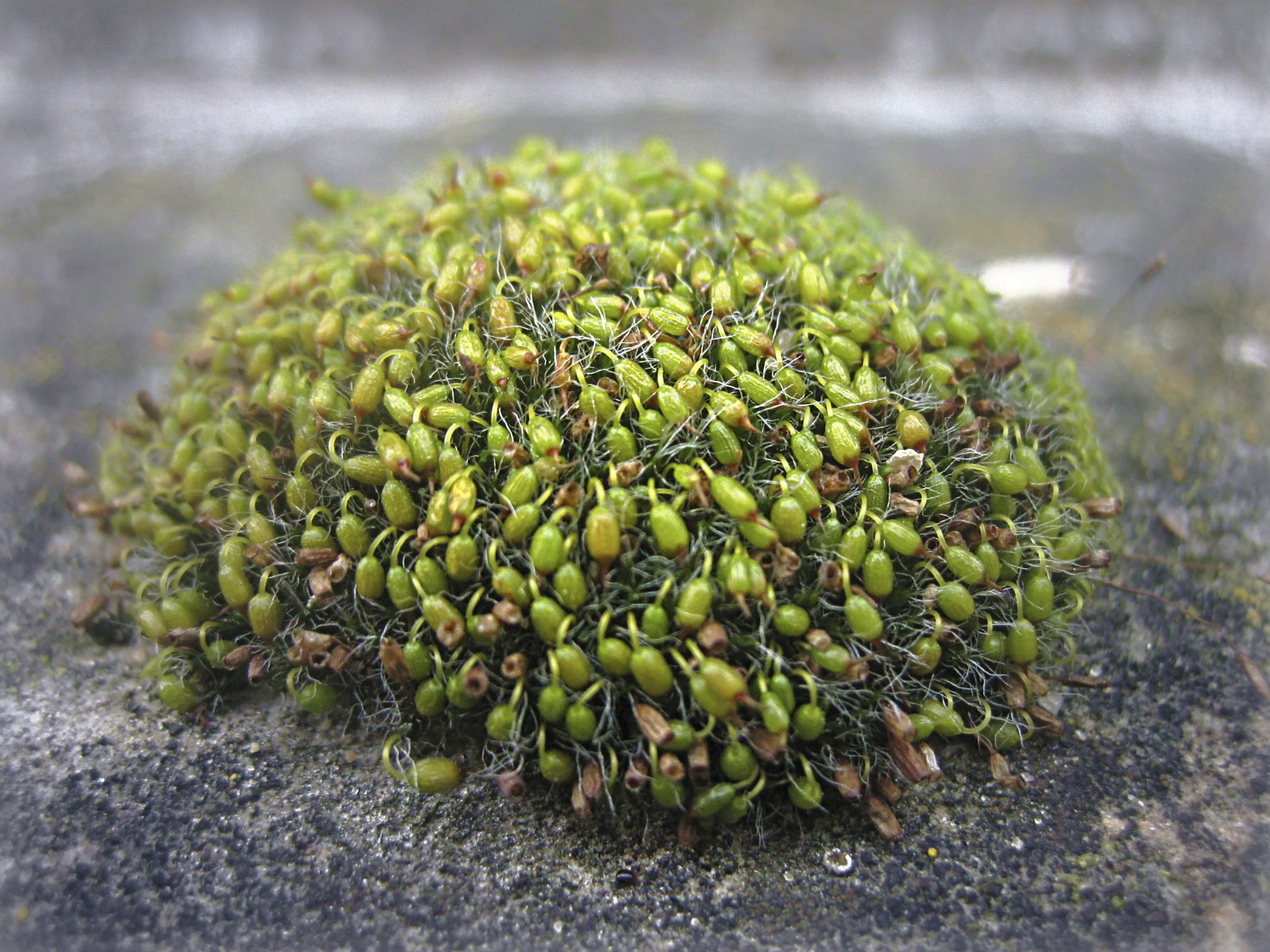 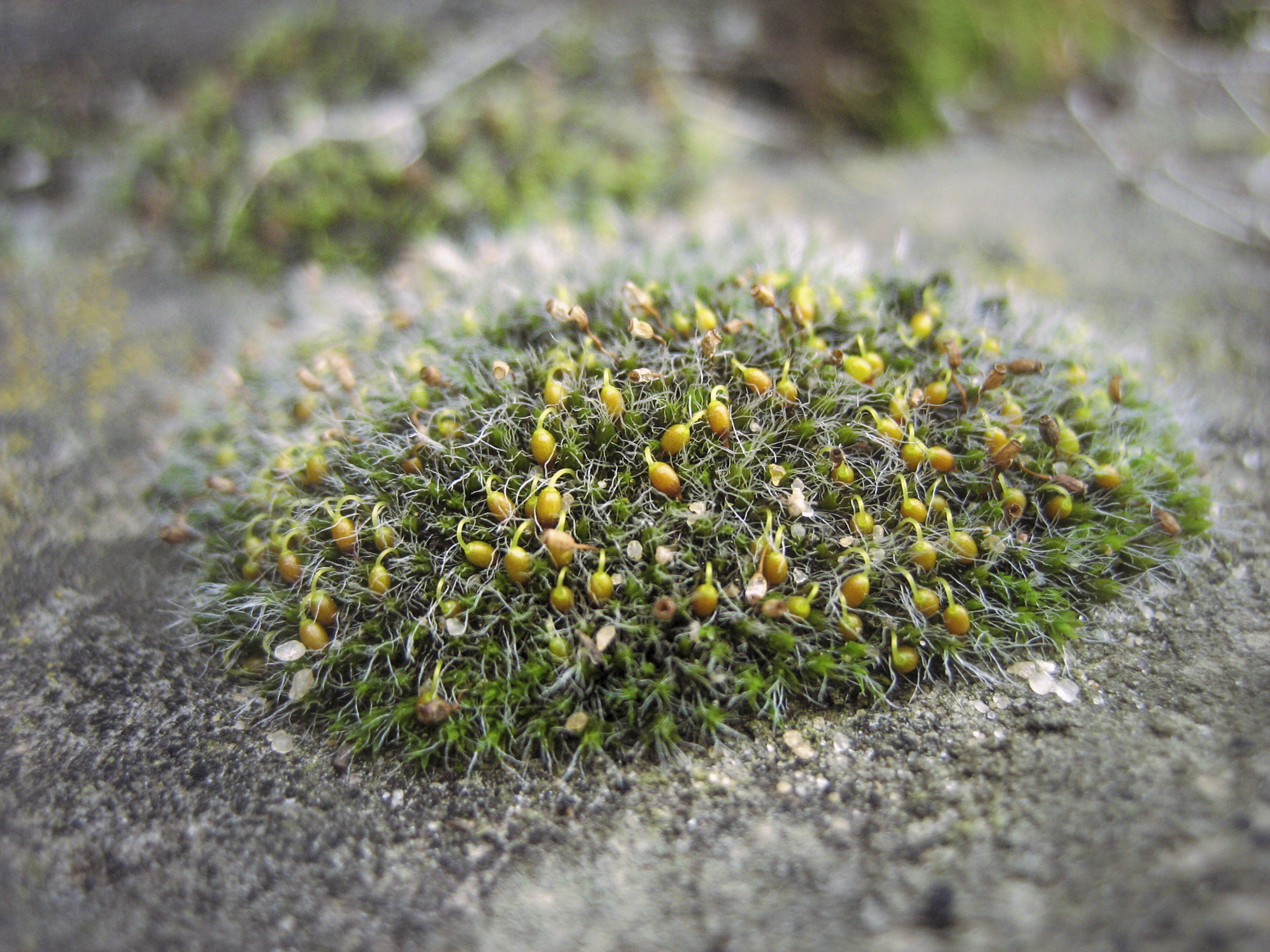 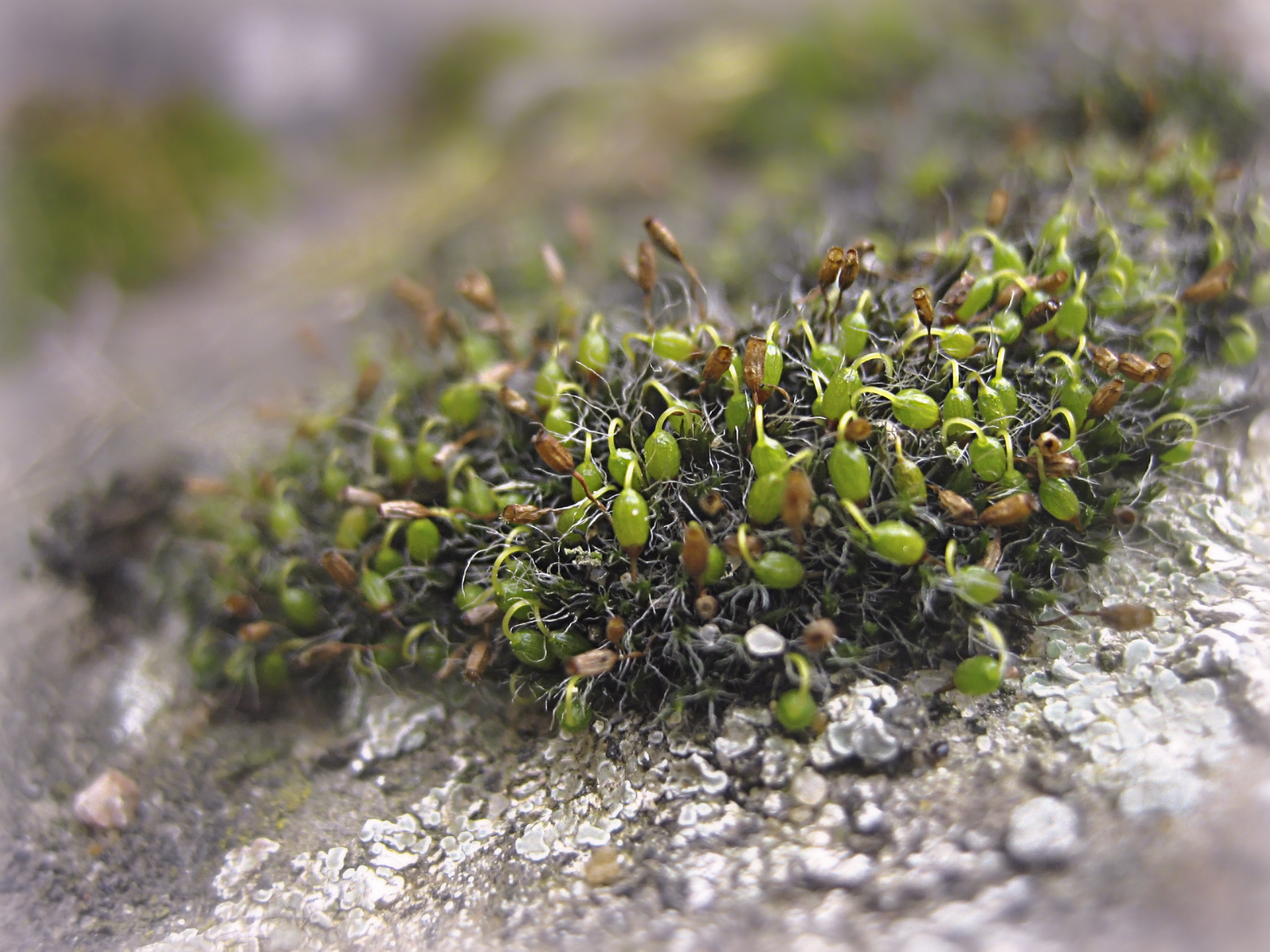 That was a satisfying explanation until I tried to identify them by their Latin names. 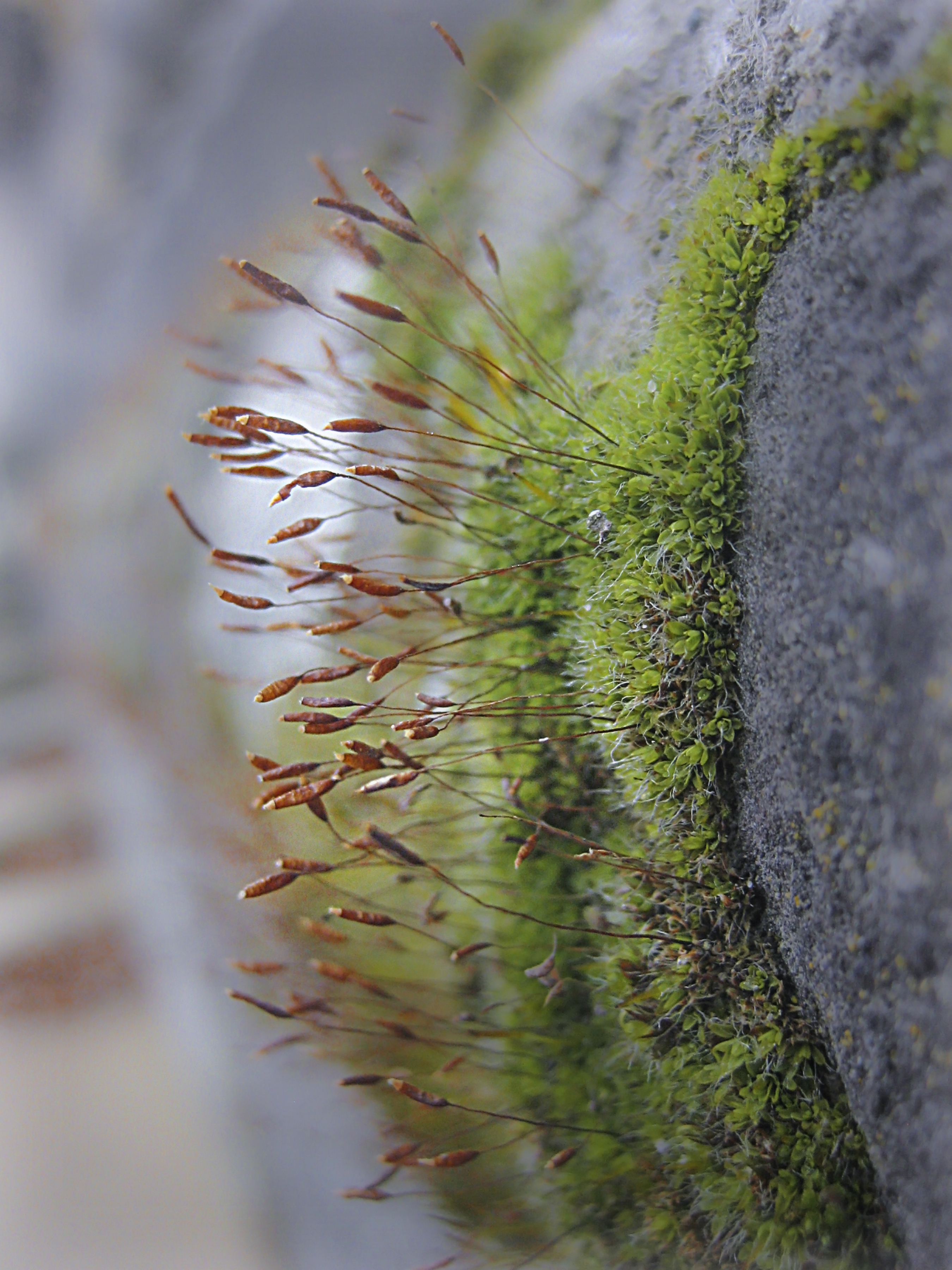 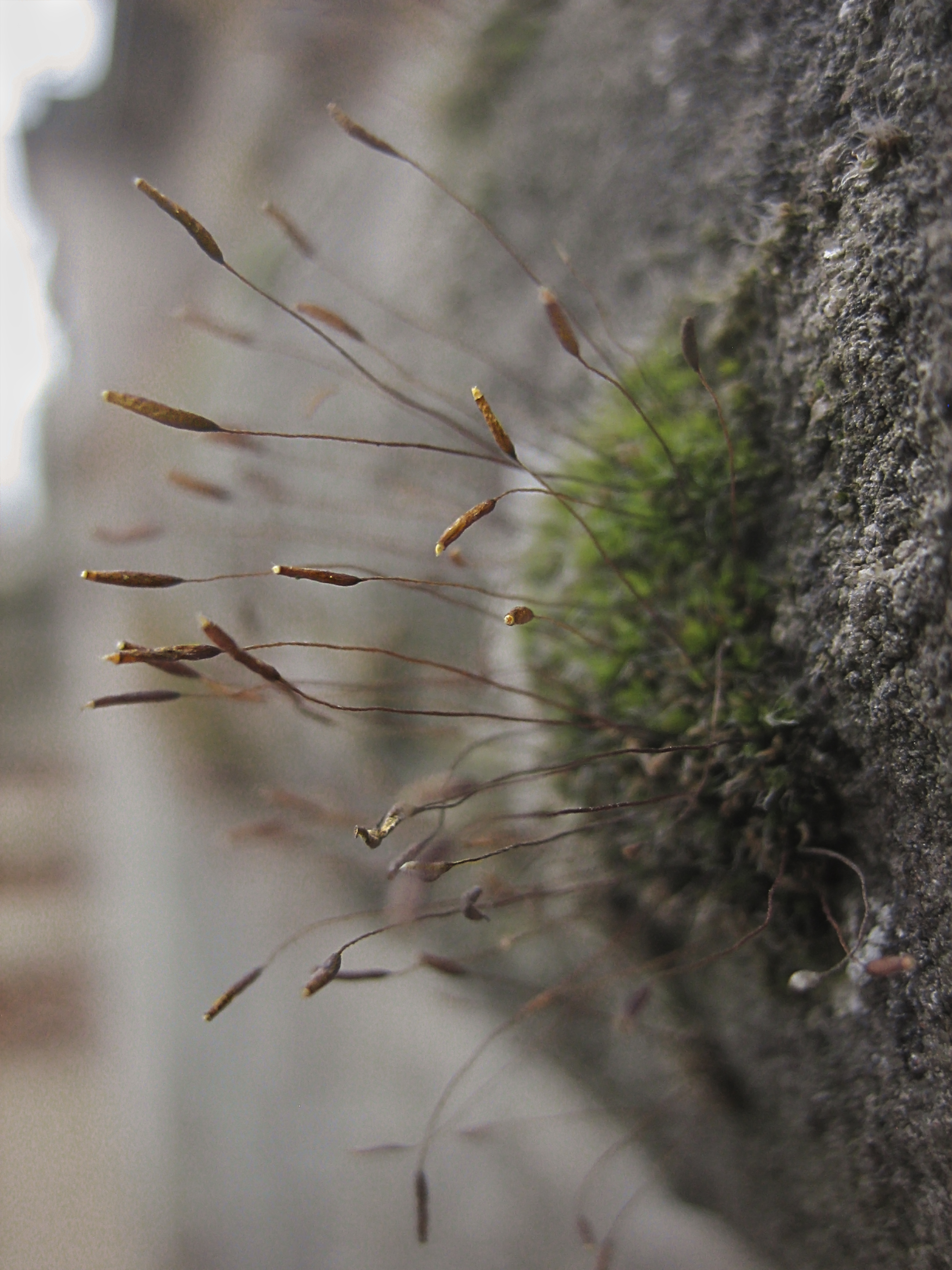 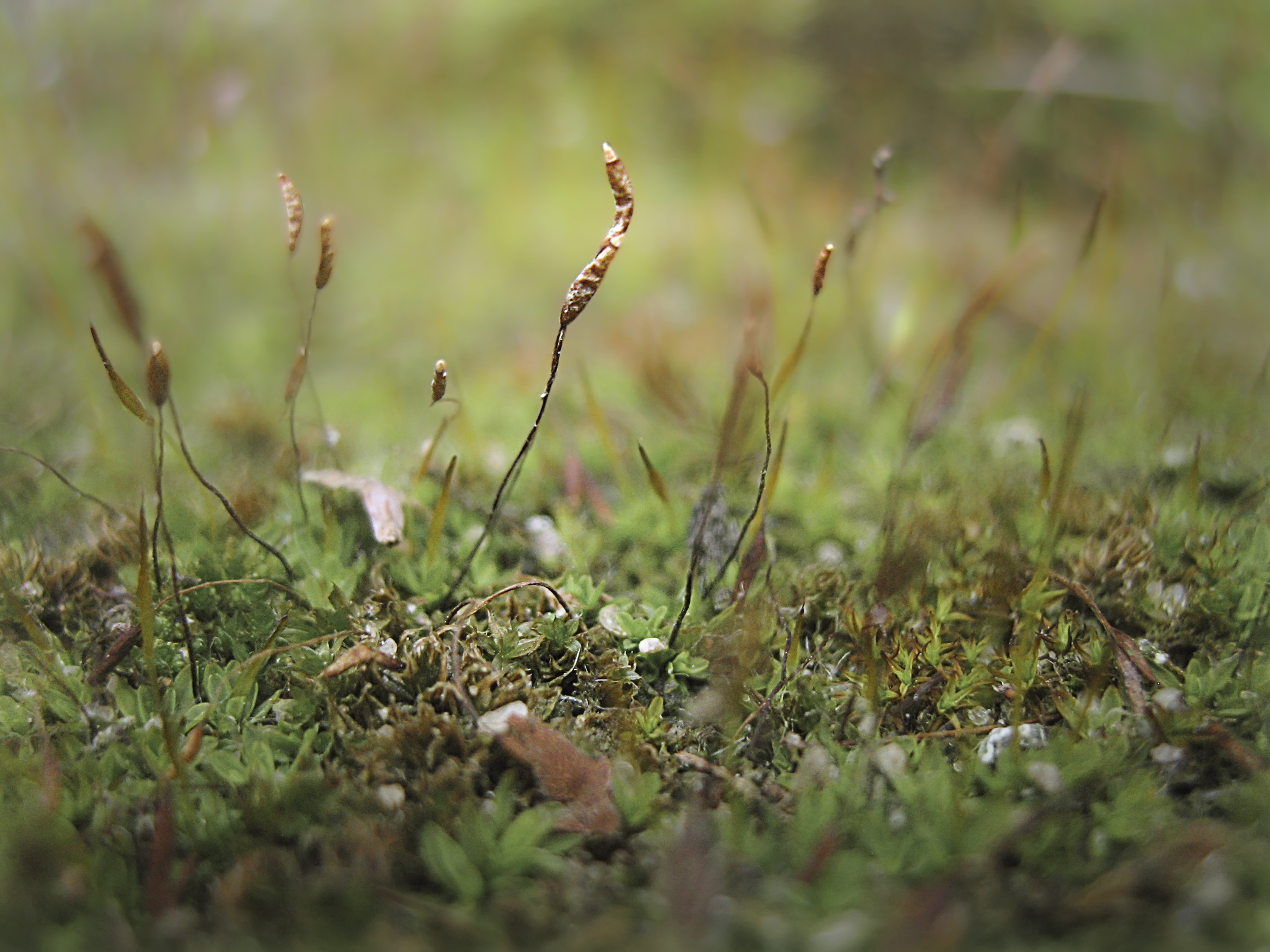 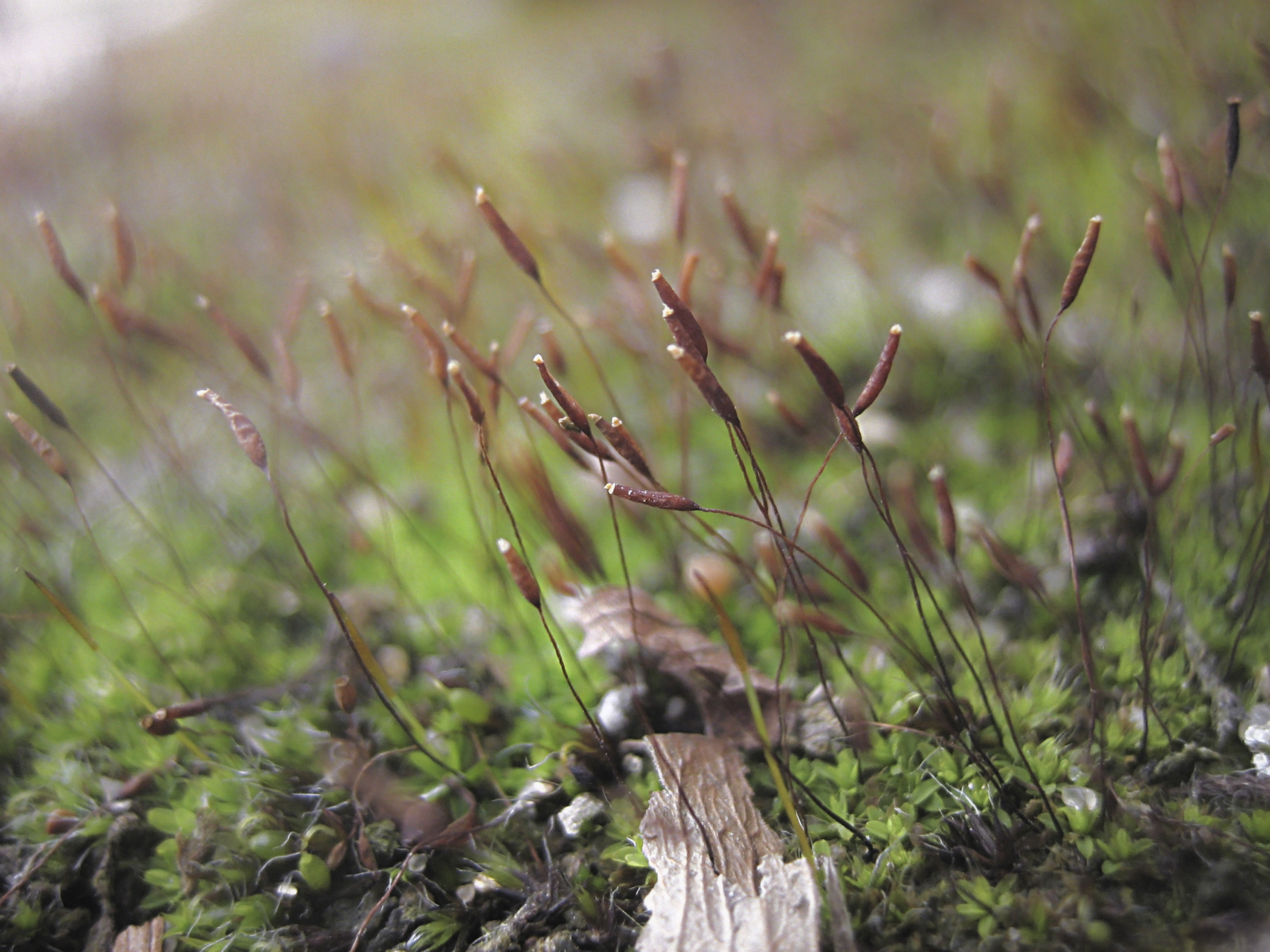 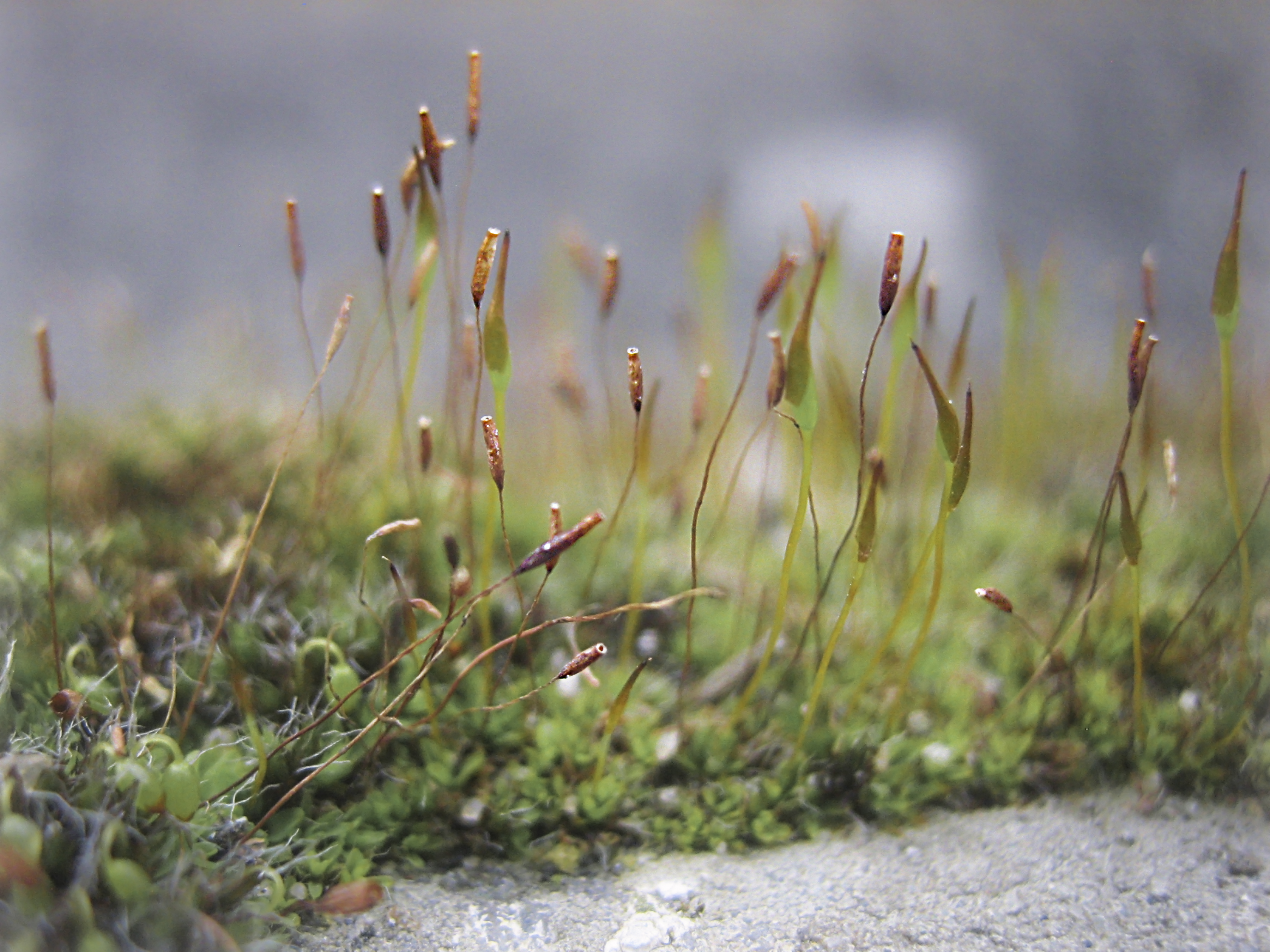 At first it seemed like a no-brainer; image searches based on the long stalk  seemed to confirm that it was wall screw-moss (Tortula muralis), but closer comparison  between images provided by the search engine and my photos showed a different kind of leaf than the “sprouts” of my pictures and in fact, when I went back to my own photos I couldn’t say for  sure that the long stems really were emerging from the “sprouts”.  I did  eventually find my sprout moss, which  is really called grey cushioned grimmia (Grimmia pulvinata), so now I’m back to thinking there are  three types of moss here. The first (#1) I can’t identify, but I now think that pictures 2 thru 4 are Tortula muralis, and pictures 5 thru 9 are Grimmia pulvinata. My hunch that the two types grow in proximity to one another was strengthened by this botanical illustration showing them paired.

JAC: Here’s the illustration from Lizzie Harper’s site (link above): 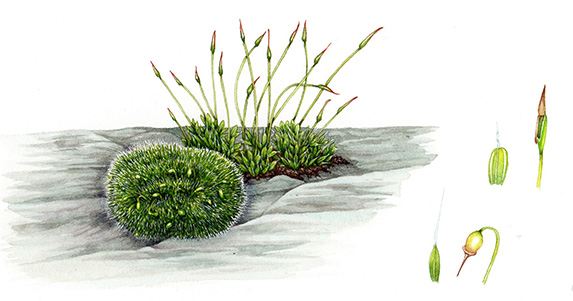 I don’t want to leave the statues out, so the final picture is a detail from the top of one of the columns.  He seems like an appropriate companion to the life that’s taken hold among the stone. 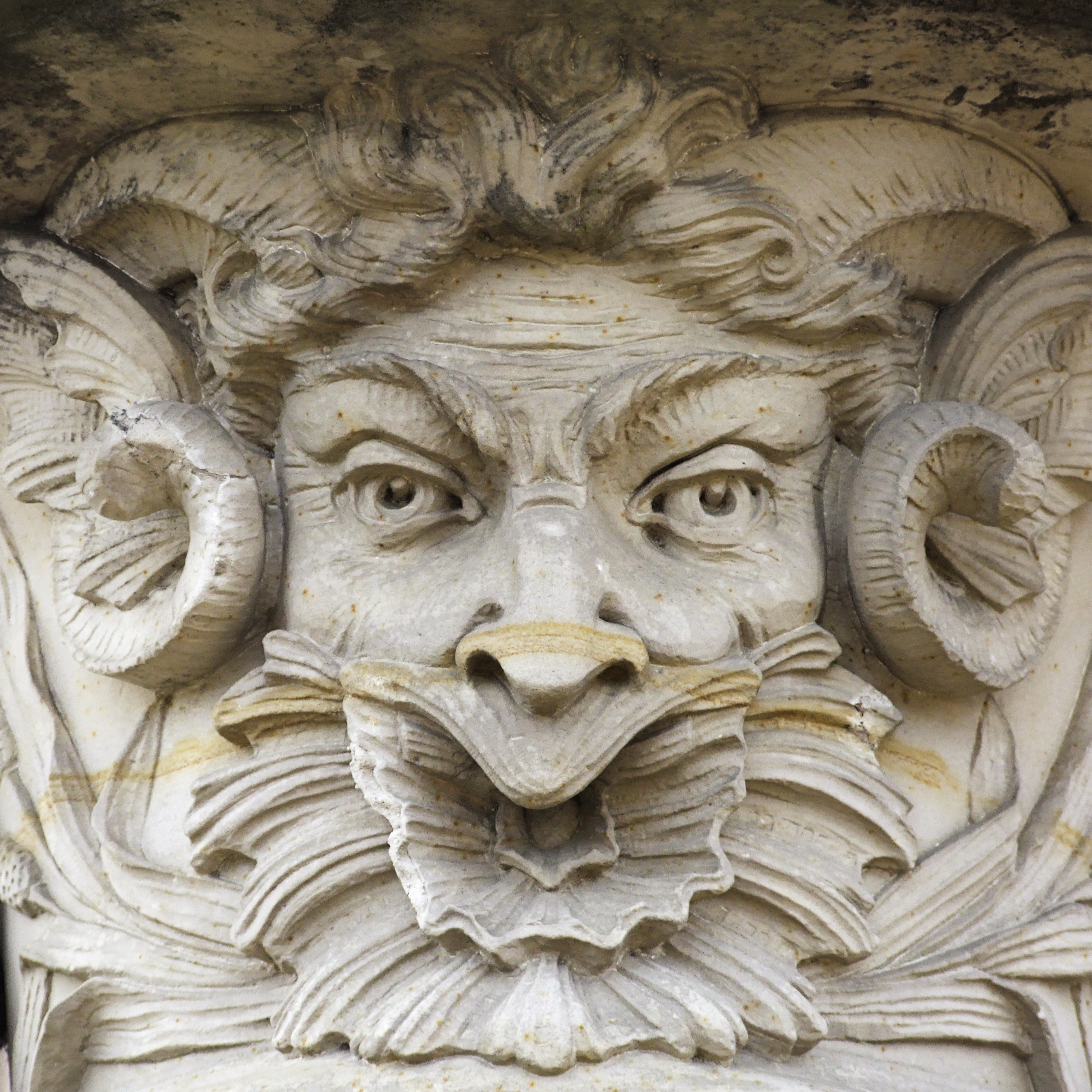 Where to visit next? France? I hear the Palace of Versailles has some lovely slime molds!