Do send me good wildlife photos if you got ’em, as this site uses seven sets per week. We may have to go to sporadic features of photos, which is okay if I don’t receive any.

Today’s selection comes from Rodney Graetz, featuring wildlife from tropical Australia. Rodney’s notes are indented, and you can enlarge the photos by clicking on them.

A sample of birds from a tropical Australian coastline

Location: As a visitor, I photographed these birds here in the city of Cairns, Australia.  From Cairns, you can access the Great Barrier Reef by boat in just 90 minutes, so tourism is a major industry.  But, because the Reef is close by, local wave action is suppressed and sandy, surfing beaches non-existent.  The main beachfront of Cairns is an intertidal mudflat that is popular with visitors because of the numbers and variety of birds attracted there. 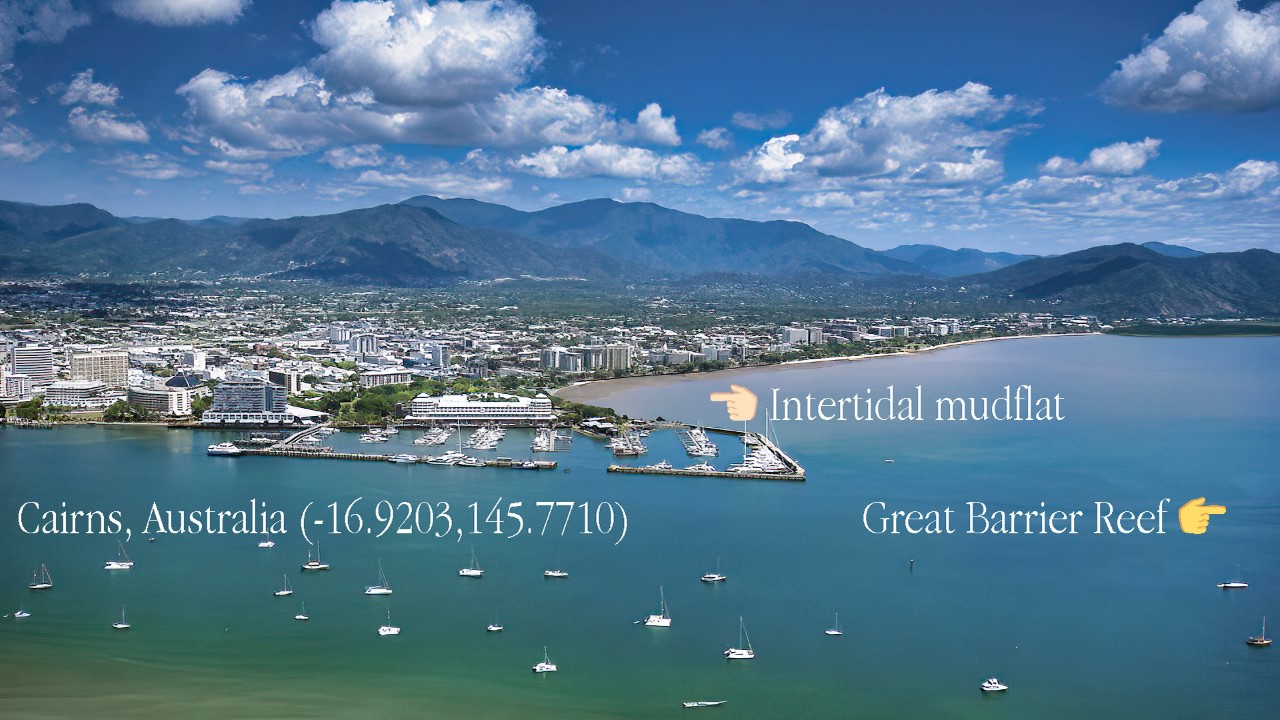 The Australian Pelican (Pelecanus conspicillatus) is easily the most eye-catching of the mudflat birds because it is big—standing up to 1.5 metres high with a 2.5 metre wingspan.  These mostly juvenile (and fat) birds are busily grooming while the tide is in, and when it retreats, they will curl up and doze, oblivious of the passing crowds.  They “formation fish” in deeper water, but spend of the daylight hours digesting their catch.  A group of fat grooming pelicans evokes the first line of George Gershwin’s song – “Summertime, and the living is easy.  Fish are jumping, etc.” 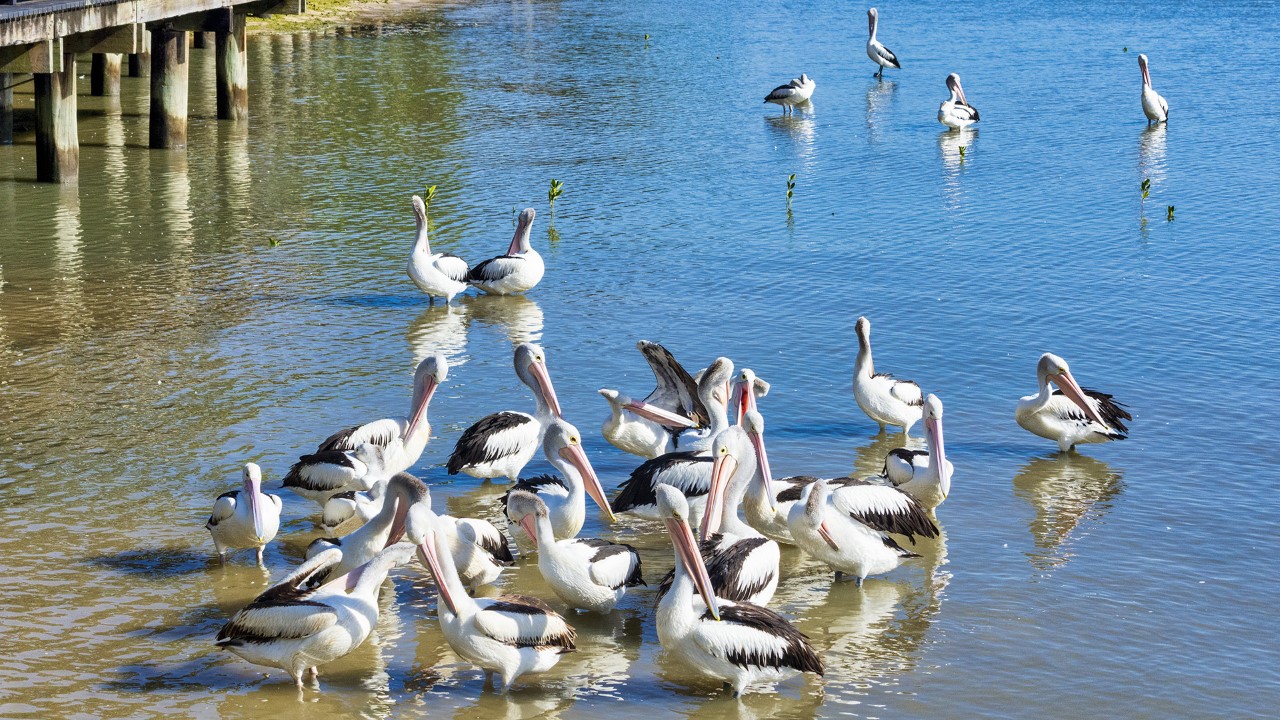 This species, the only pelican species on the Australian continent, is a practising nomad.  While mostly a coastal bird, it will travel great distances into inland Australia to mass breed when unusual rainfall has flooded extensive but normally dry wetlands.  This example below was my once-in-a -lifetime encounter involving thousands of birds [JAC: the video of the encounter is here.] How the birds become aware of flooding and potential breeding many hundreds of kilometres away from the coast remains unexplained. 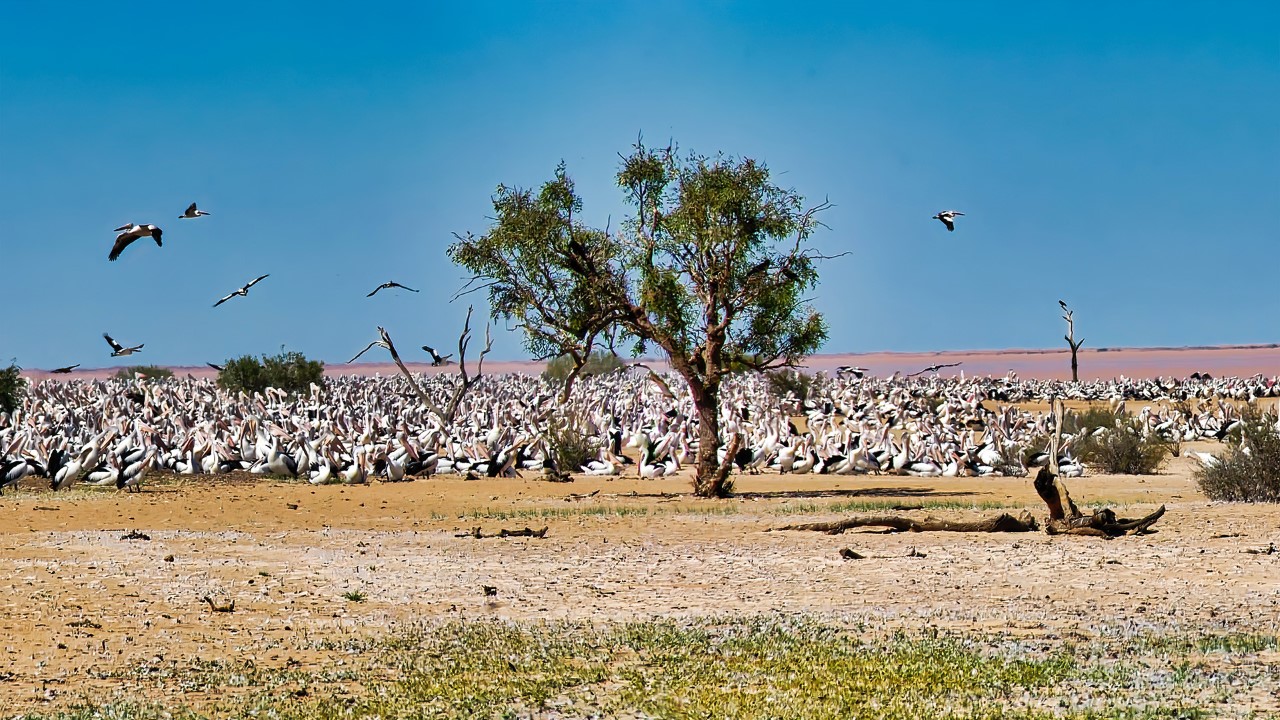 The Australian White Ibis (Threskiornis molucca) is ever present on the mudflat and always appears grubby.  The fertile and productive mudflat is populated by innumerable small crabs which forage when tidally flooded then retreat to their vertical burrows. 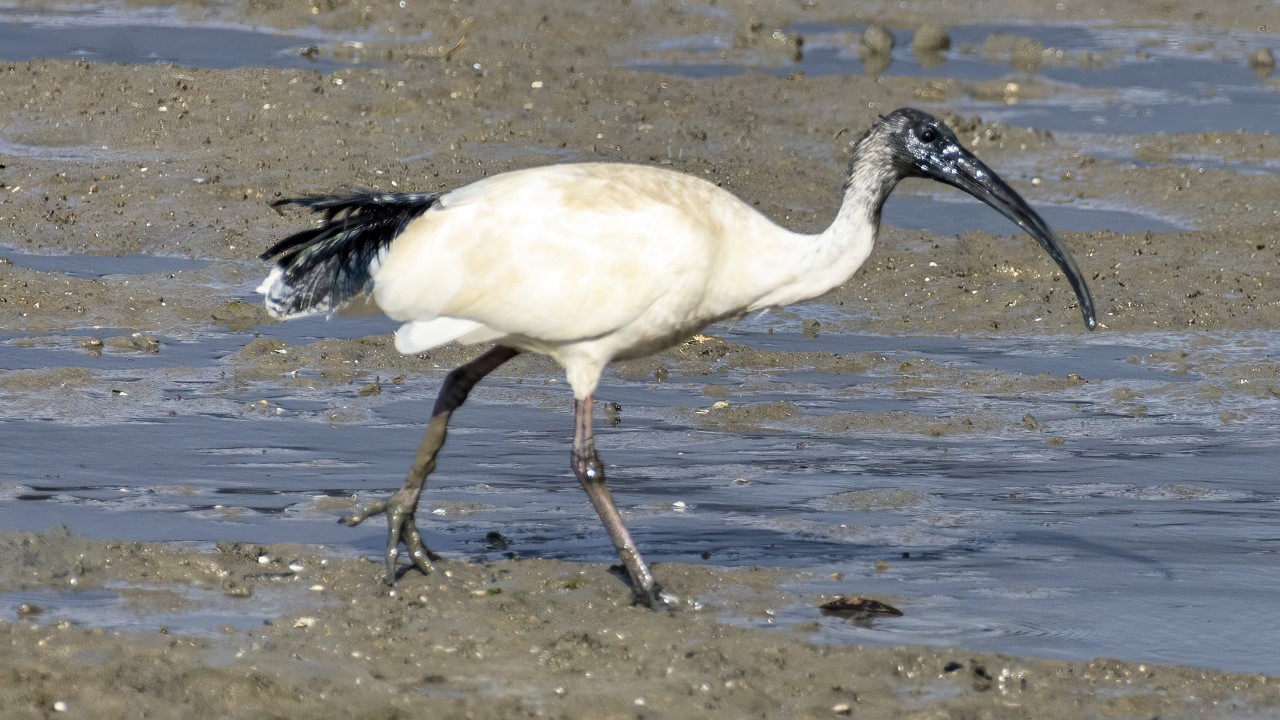 . . .where the Australian White Ibis successfully pursues them. 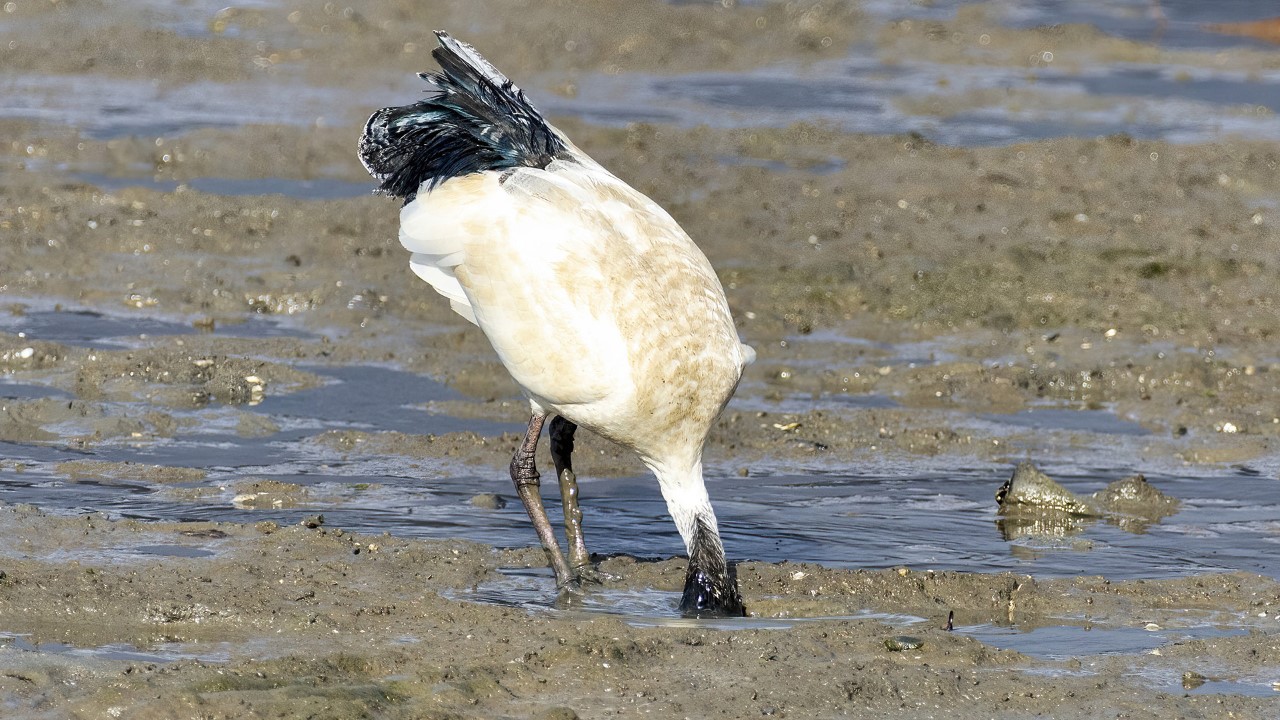 Egrets (Ardea sp.) are also always present but concentrate in the few freshwater streams that flow across the mudflat where they stand like statues.  The included Pelican and the bathing Silver Gull (Larus novaehollandiae) are young birds.  The likely Egret species are A. intermedia, the Intermediate Egret, and A. alba, the Great Egret (top centre).  They actively hunt in the incoming tide – presumably for small fish – following it as it moves across the mudflat: 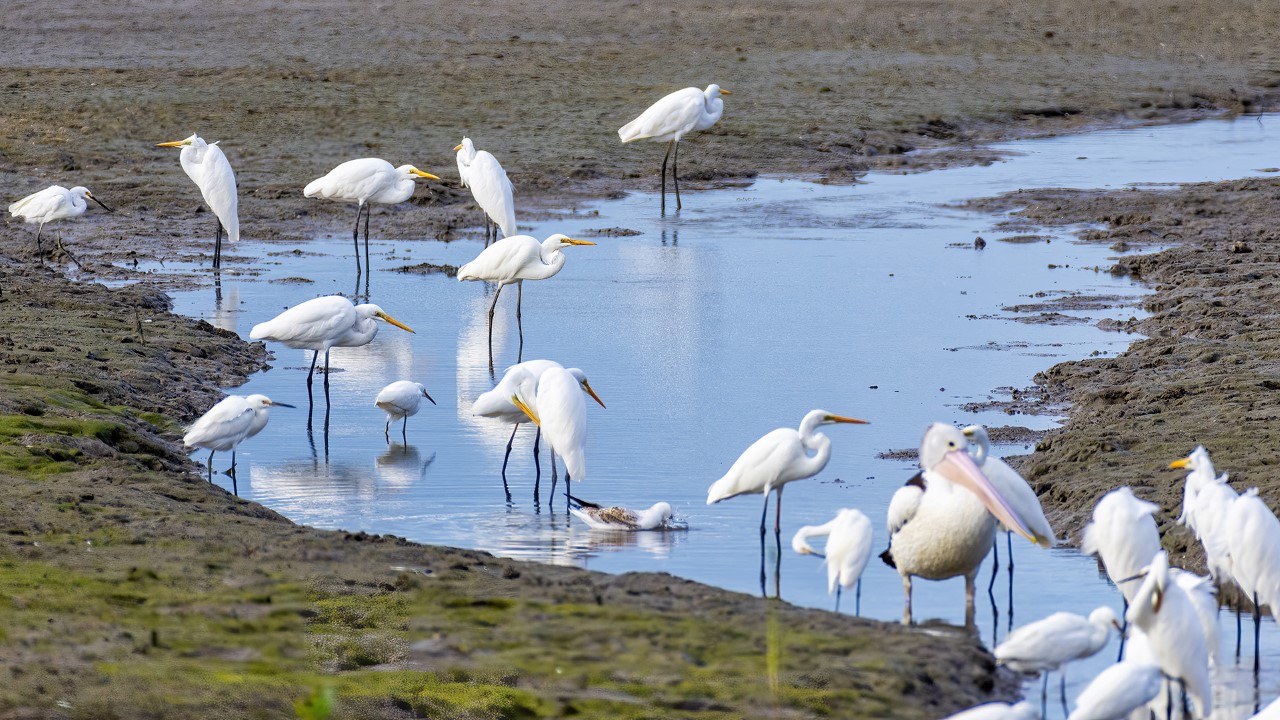 Far Eastern Curlew (Numenius madagascariensis) is a summer visitor to Australian wetlands after travelling up to 10,000 km from northern Siberia and China by following the Asian coastal flyway.  In the company of about 10 other species, they arrive in northern Australia in early August to spend six warm months (August – March) feeding in various coastal wetlands before making the return flight.  It is a long and  hazardous journey that enthralls all who read about it on the information panels looking out over this mudflat.  Across Australia, these birds, and the wetlands they depend upon, are totally protected, and fiercely safeguarded by local citizens.  It is an uplifting and continuing story: 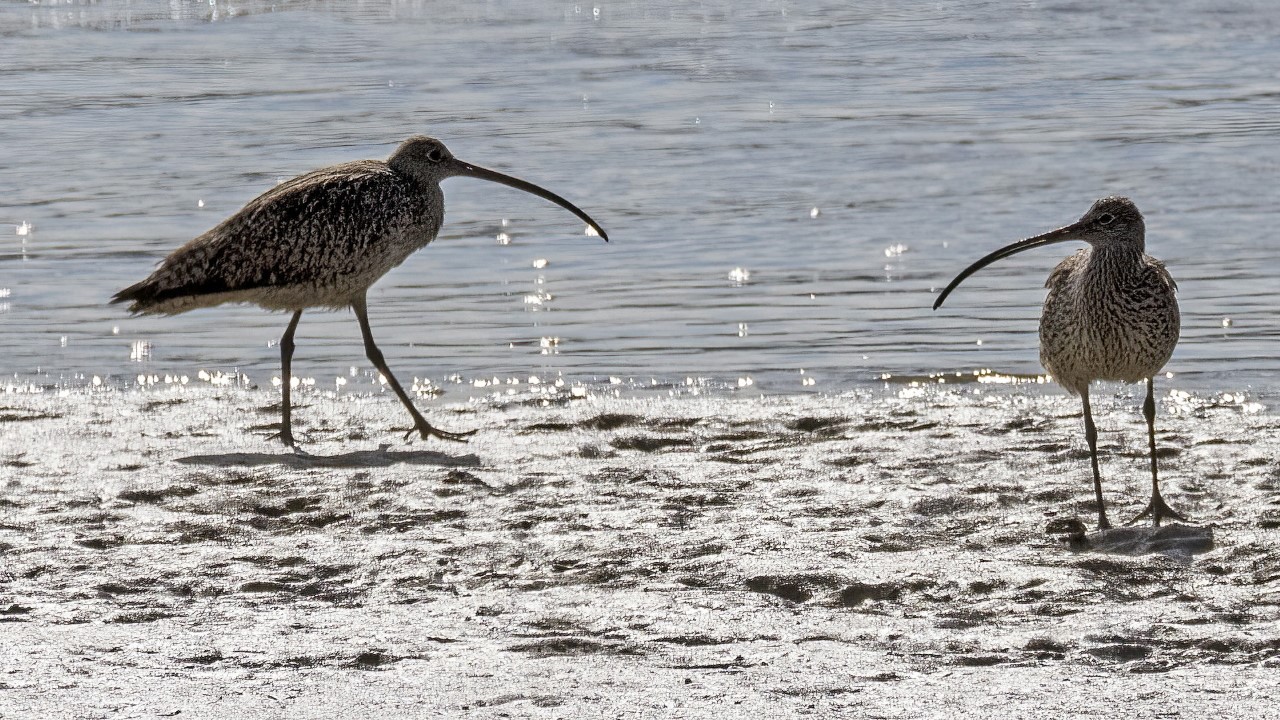 The Comb-Crested Jacana (Irediparra gallinacea), aka the Jesus Bird, is an essential wetland bird.  Every freshwater wetland containing floating leaf waterlilies (Nymphaea sp.) will be occupied by Jacanas industriously inspecting the leaf islands for insects.  They are a delight to watch and to muse on their extraordinarily long toes.  Less well known is their breeding behaviour whereby the male bird assumes sole responsibility for rearing the hatchlings, transporting them tucked in under his wings.  Hard to believe?  Watch this video at 2:30 minutes. 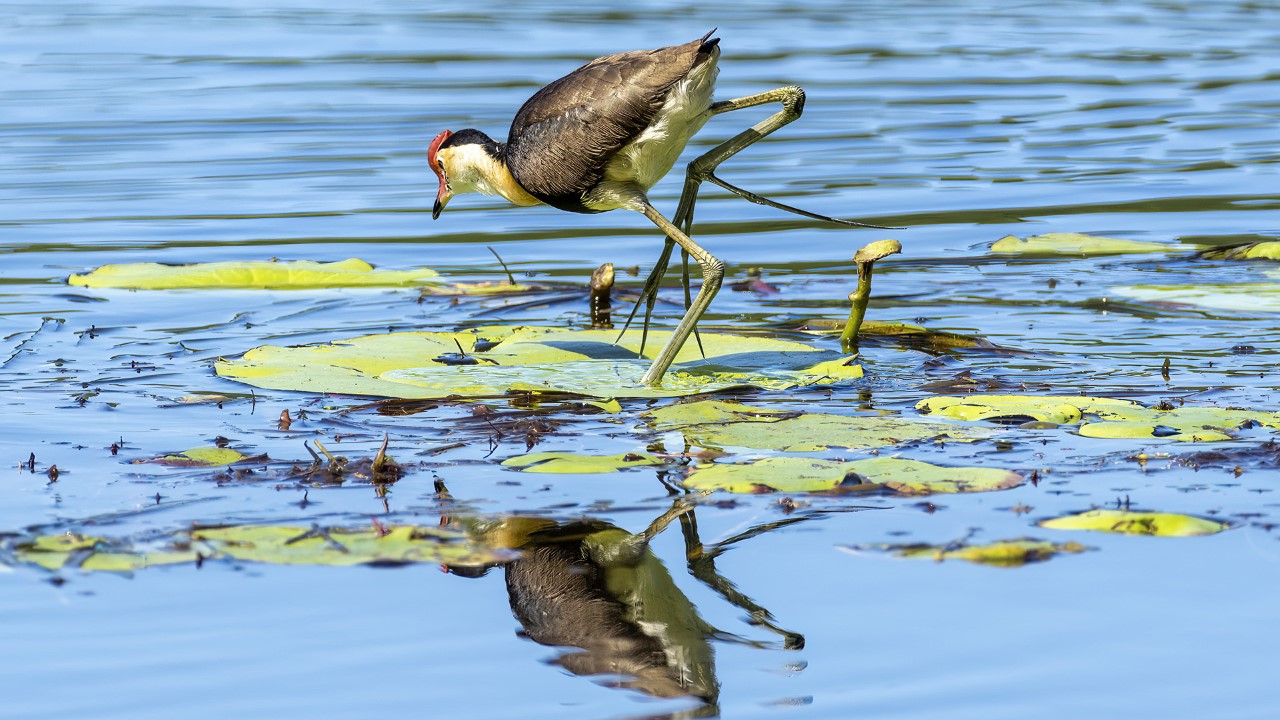 Rainbow Lorikeet (Trichoglossus haematodus) is a common, small, and very colourful parrot that most people admire but wish it would live elsewhere.  Swift fliers, energetic foragers, and communal roosters where they noisily dispute the presence of each other—all night long.  The description of their combined voice as ‘raucous chattering’ is an understatement.  A wall of noise is more accurate.  But they are a brilliant flash of colour, in flight and at rest. 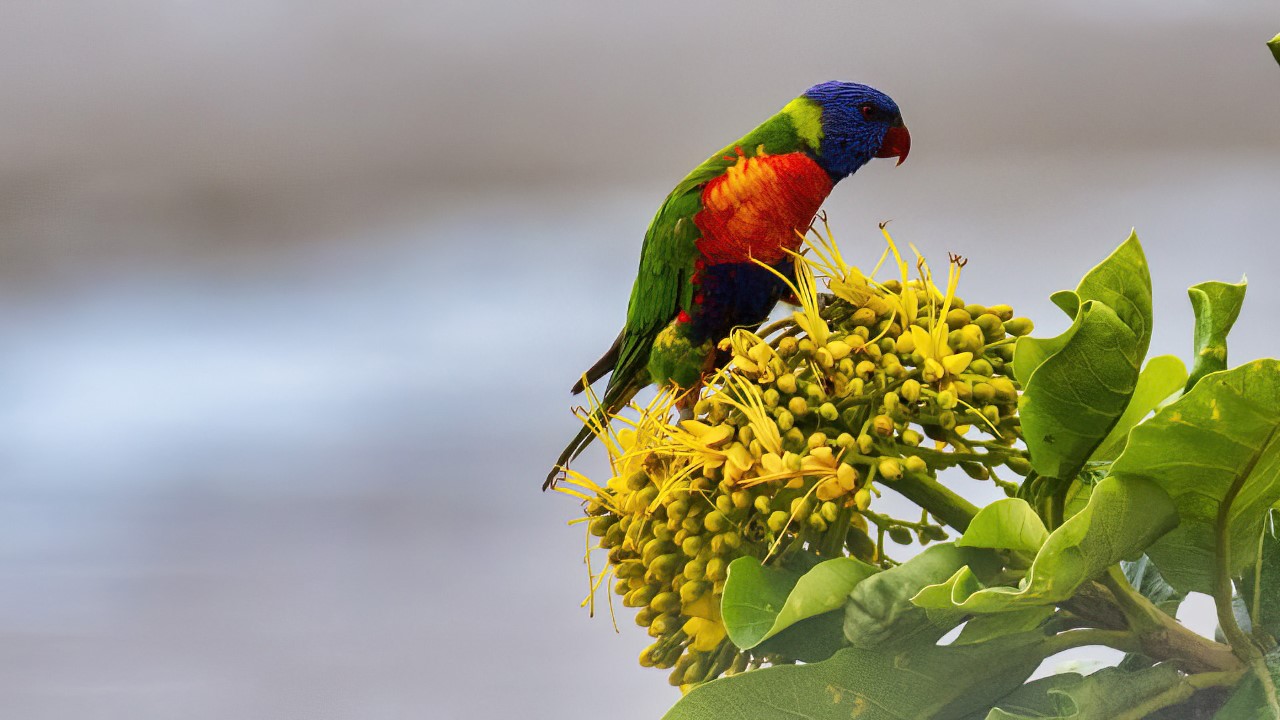 The Australian Brushturkey (Alectura lathami) is a regular, but not always welcomed, bird in tropical gardens.  It is a Megapode, one of three Australian species of mound builders, who reproduce by the male bird building a large mound – metres in diameter – of composting plant material into which the female will lay as many as 20 eggs to be passively incubated by the composting process.  The hatchings dig themselves out unaided and fend for themselves thereafter with no parental care.  The male bird is very industrious in creating the nesting mound and overnight can convert your planted garden into a mound.  Should you restore your planted garden, he will then return and rebuild his mound, and so on, until one of the competitors admits defeat.  Here a young male bird has just discovered (in the Cairns Botanic Garden) a potential source of composting material (mulch) and is evaluating it for his mound material. 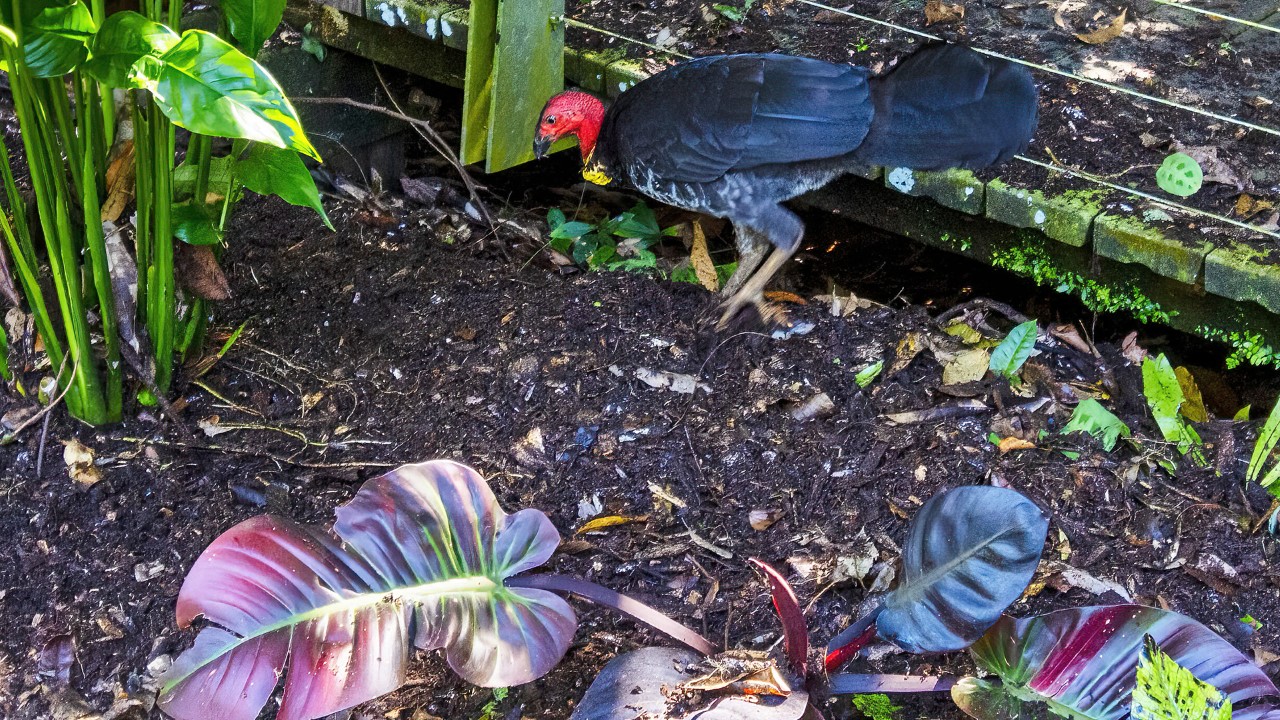 Some 45 minutes later, the bird has rearranged the garden mulch, mostly out onto the footpath, and found it unsuitable for building a mound.  Home gardeners in tropical Australia are very patient. 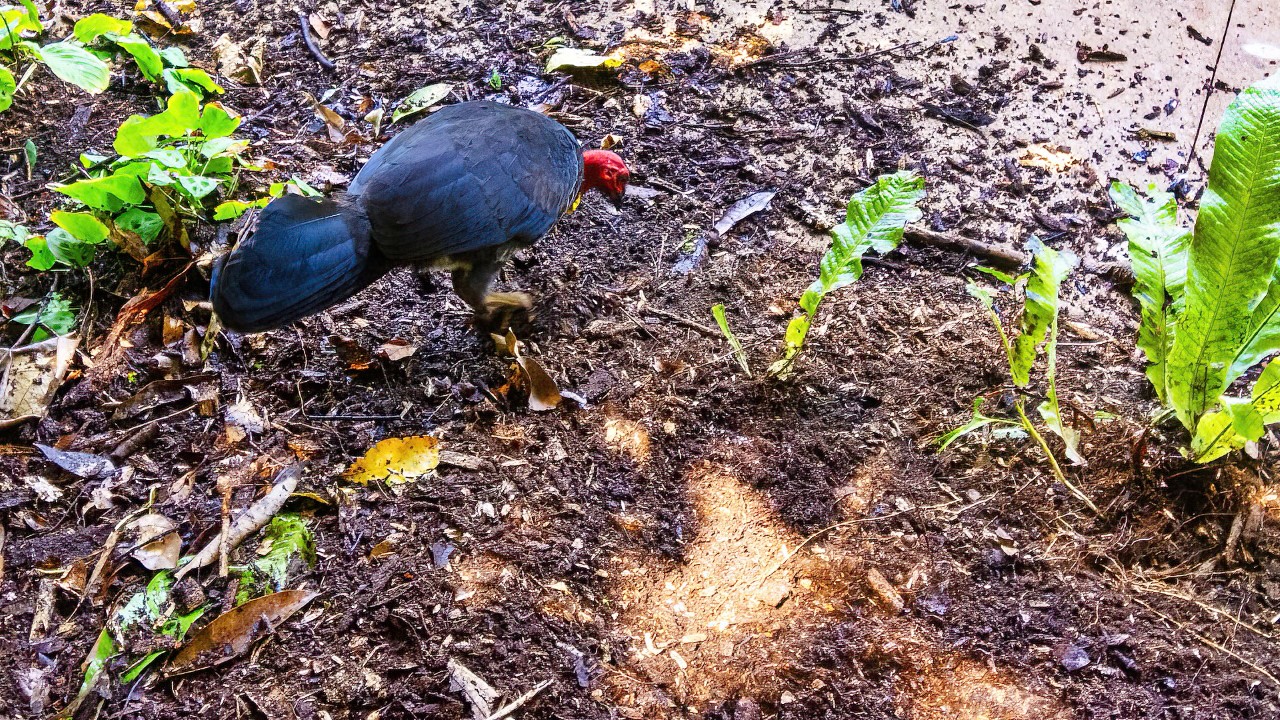 JAC note: Richard Dawkins discusses this bird and its mound-brooding behavior in his new book on flight. But the main point of his discussion is that young of the species use their wings to run uphill and up trees when pursued, which could have been one stimulus for the evolution of wings that later became co-opted for flight (this is not, however, a widely held view for the evolution of flight in birds).