I’ve finished reading Richard Dawkins’s new book Flights of Fancy: Defying gravity by Design and Evolution, and quite enjoyed it, for it incorporates many of the principles he’s emphasized in his books—the gene’s-eye view, coevolution, arms races, step-by-step adaptive evolution, evolutionary convergence, and so on—into a discussion about a single adaptation, flight. Well, not a single adaptation, since he discusses gliding animals like flying squirrels and flying fish, the true flight of animals like birds and bats, and the “flying” of pollen via their insect vectors or of seeds via dispersal mechanisms.

And the “design” in the title refers to a convergence between what natural selection has done to facilitate aerial movement and how humans through deliberate design have mimicked many of nature’s contrivances in aircraft.

One of the pleasures of the book is discovering odd but fascinating bits of flight-related natural history that show us the power and “cleverness” of natural selection. Her are two examples he discusses.

The first is the Javan cucumber, Alsomitra macrocarpa, found on the tropical islands of East Asia. It disperses its seeds from a gourd that disgorges remarkable gliding seeds with two wings that look like this: 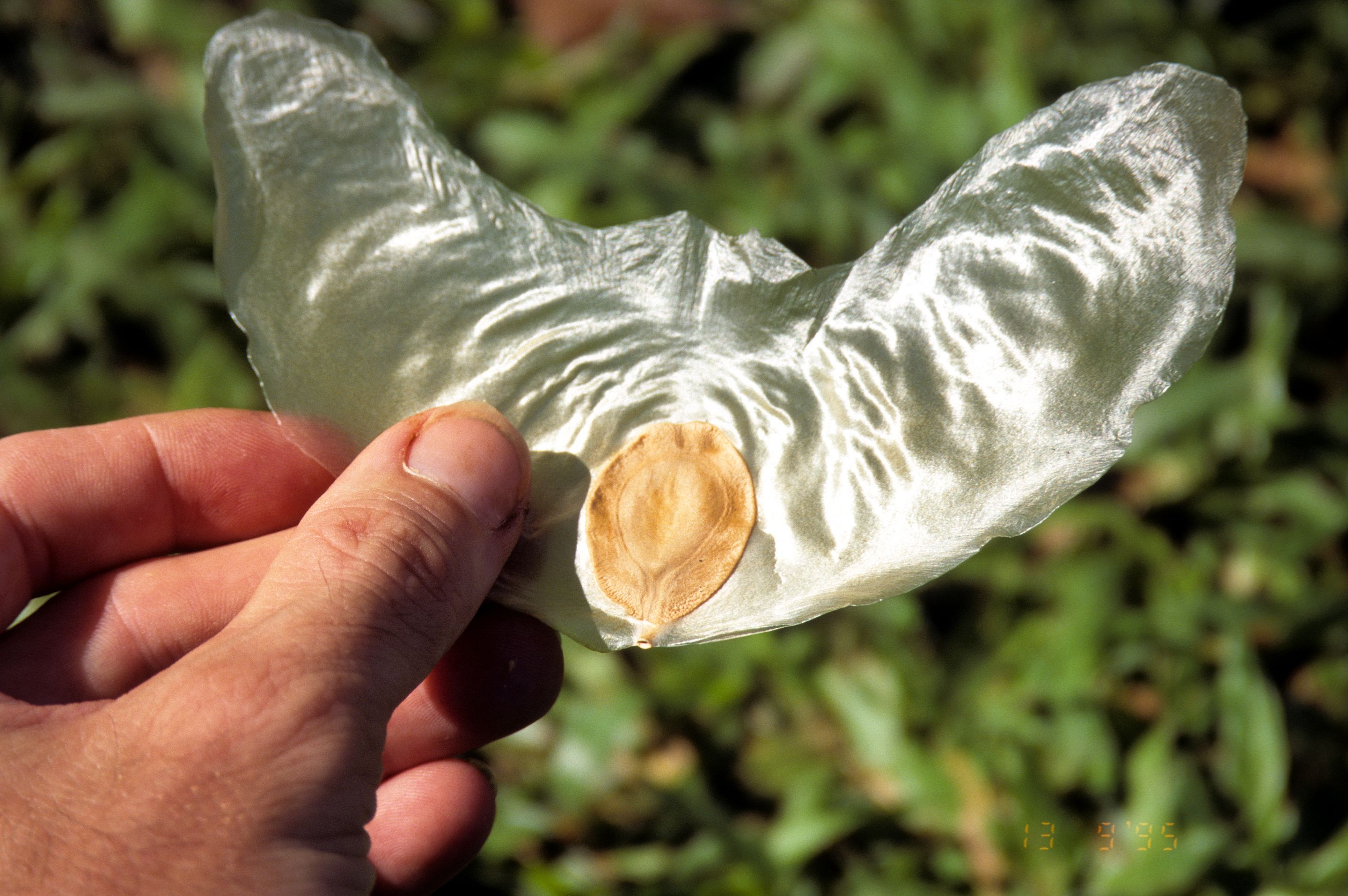 The seed or samara of this species is unusual in having two flat bracts extending either side of the seed to form a wing-like shape with the seed embedded along one long edge and the wings angled slightly back from it. As the seed ripens the wings dry and the long edge furthest from the seed curls slightly upwards. When ripe, the seed drops off and its aerodynamic form allows it to glide away from the tree. The wing spans some 13 cm and can glide for great distances. The seed moves through the air like a butterfly in flight — it gains height, stalls, dips and accelerates, once again producing lift, a process termed phugoid oscillation. In the past it was often found on the decks of ships at sea.

You can see that dipping and stalling in the second video below.

By the way, Richard has a great discussion about why it’s adaptive for plants to disperse their seeds. If your parents are growing in a good place, why send them many meters away to a place that might not be as good? But you can read about that yourself.

The remarkable aspects of these seeds is how far they glide, ensuring that many of them find themselves well away from their parent. Here are two videos, one from Attenborough, showing the phenomenon.  These features are certainly evolved as adaptive for the plant.

. . . and a video from YouTube showing the remarkable gliding power of these seeds, which resemble plantlike albatrosses in their ability to glide very far without flapping:

This next one is remarkable. I’ve taught about “pseudocopulation”, a trait that some orchids use to spread their pollen using wasps as surrogate genitalia. There are many orchids that resemble female wasps, and randy males try to copulate with them. (Some of these “wasp orchids” even produce pheromones resembling those of female wasps.)

The “intent” of the orchid (I’m speaking in evolutionary jargon, of course) is to affix its pollen sacs, or pollinia, onto the wasp. After a fruitless attempt at copulation, the wasp, with a sac of pollen stuck to its body, eventually makes its way to another orchid, tries to bonk it, and transfers the pollinia to the female’s stigma, effecting fertilization.  (These wasp-mimicking orchids almost never produce nectar to lure the insects; they save their energy and just act sexy.)

One remarkable orchid that tricks wasps this way is the “hammer orchid“; or rather orchids, as there are ten species in the genus Drakaea found in western Australia. A wasp, lured by a part of the flower that looks like a female wasp (it also smells like one), lands on that bit and tries to copulate with it. (The Attenborough video below shows the similarity between flower and female wasp.) At some point, the female-mimicking part of the flower folds over, hammering the male wasp against the pollinia. The pollen sticks to its body, and fertilization is halfway there.  The act is completed when the frustrated wasp tries copulating with a different orchid, and the hammer then puts the pollina in contact with the stigma.

Females of these species are wingless (see below) and the orchid has evolved (unknowingly, of course) to look like them. The resemblance is facilitated by the female wasps’ habit of hanging atop a step to lure the males, which is just what the orchid does.

Note that only males can pollinate these orchids (or any wasp-mimicking orchid), so the flower potentially loses half its pollinators. But since females can’t pollinate anyway, being wingless, it’s not that big a loss. What puzzles is me is why the wasp nevertheless persists trying to copulate with the flower. If it ever learned not to waste its time, the flower would go extinct.

Have a look. There are even more remarkable tactics that orchids use to fertilize each other, but I’ll save those for later.

13 thoughts on “Biological marvels of flight”