Note by Jerry: Today would be Rosalind Franklin’s 102nd birthday, and I remembered this excellent assessment of her life and career written for the site by Matthew Cobb exactly two years ago—on Franklin’s 100th birthday. There will be more about Franklin in the book that Matthew’s writing now (a biography of Francis Crick), but I’ll republish this and ask Matthew to correct any mistakes or add anything he wants. It’s good to refresh ourselves about Franklin’s achievements (far more than taking X-rays of DNA), and she does seem to be an object of perennial discussion.

The chemist and X-ray crystallographer Rosalind Franklin was born 100 years ago today. Although she was never in the public eye in her lifetime, in the last quarter century she has become a figure of renown, with her name attached to a university, a medical school, several buildings and student dorms, lecture theatres, as well as various prestigious medals and fellowships and – most recently – a future Mars Rover and a commemorative UK coin. She died in London, of ovarian cancer, on 16 April 1958.

Franklin’s gravestone, in the Jewish cemetery in Willesden, north London, concludes: ‘Her research and discoveries on viruses remain of lasting benefit to mankind’. 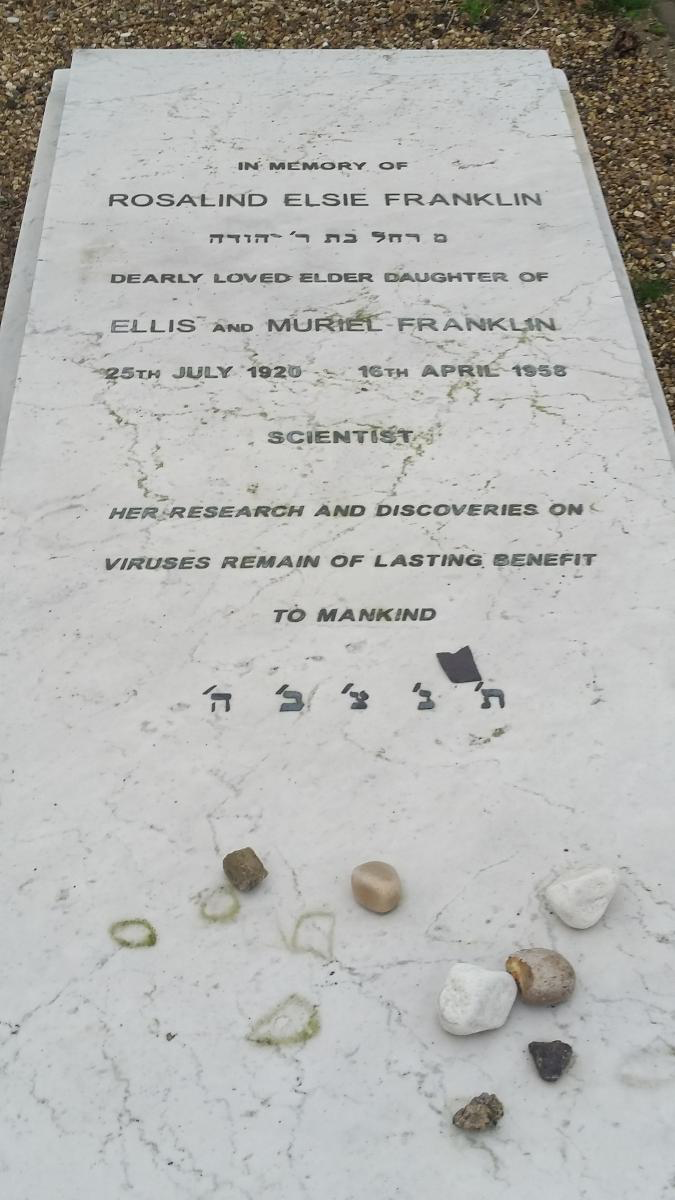 Franklin’s work on RNA viruses, carried out from 1953-58 at Birkbeck College, London – first the tobacco mosaic virus, then, briefly, on the polio virus – was of such significance that her PhD student, Aaron Klug, won the 1982 Nobel Prize for this research. Had she lived, she would have had a good case for winning two Nobel Prizes, one for the virus work, and the other for her contribution to the resolution of the double helix structure of DNA, which she made in 1951 and 1952 at King’s College London.

By any standards, therefore, Franklin was a remarkable scientist whose skill and insights created a great legacy of work. As her Nature obituary put it:

The news of the death of Rosalind Franklin on April 16 came as a shock to many workers in the field of biochemistry and virus studies. It is a special tragedy when a brilliant research worker is cut off at the height of her powers and when exciting new discoveries are expected from her.

She was of international renown, collaborating with leading researchers at Berkeley, Tubingen and Yale. Those scientists valued her because, according to the Nature obituary, her work:

was distinguished by extreme clarity and perfection in everything she undertook. Her photographs are among the most beautiful X-ray photographs of any substance ever taken. Their excellence was the fruit of extreme care in preparation and mounting of the specimens as well as in the taking of the photographs. She did nearly all this work with her own hands. At the same time, she proved to be an admirable director of a research team and inspired those who worked with her to reach the same high standard.

It is striking that few of the commemorations you will see today will present this side of her work.* Instead, they will be focused on her contribution to the most significant biological discovery of the 20th century, the structure of DNA, and in particular the suggestion that James Watson stole a key part of her research—an X-ray photograph taken in 1952—known as photograph 51. 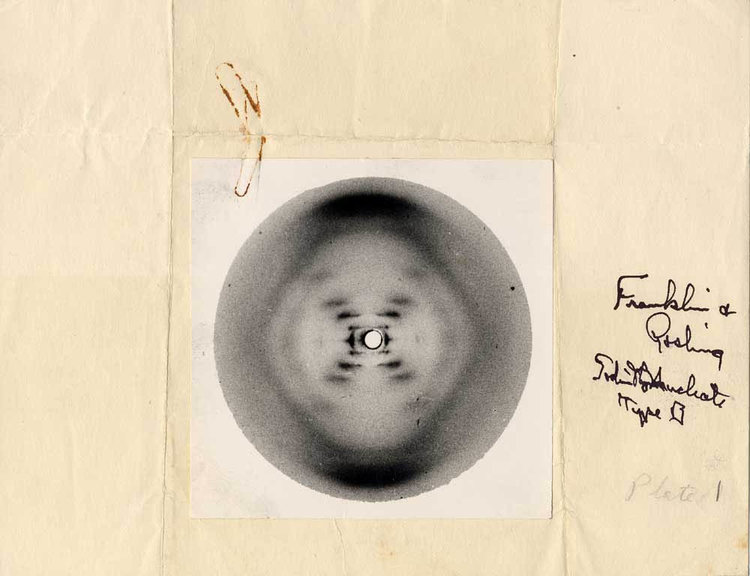 There are two problems with this – firstly, her contribution to science was so much more than ‘simply’ contributing to the structure of DNA, and secondly, in highlighting the supposed role of a single image, we are inadvertently doing her a great injustice.

Most people came to hear about Franklin through Jim Watson’s racy, novelised account of the discovery of the structure of DNA, The Double Helix, which came out in 1968. Written with a verve that contrasts with the plodding prose of his other biographical writings, The Double Helix describes how Maurice Wilkins at King’s showed Watson the famous photograph 51 and, in a flash, Watson realised its significance for the structure of DNA.

This moment, so vivid in the book, is the starting point for the modern emphasis on photograph 51 and on Franklin’s status as a wronged woman (this view is amply justified by Watson’s unsettlingly frank description of his scornful, sexist, contemporary views of Franklin in his book).

In reality, photograph 51 played a key role only in convincing Watson that DNA had a helical structure (that is all that a glance could tell you), which is something that Wilkins had long been convinced of and had been repeatedly argued in discussions in King’s. And in providing a dramatic, Watson-centred hook to the account in the book.

Franklin’s decisive and unwitting contribution to Watson and Crick’s discovery was not a single photo. Indeed, she did not even take photograph 51; it was taken by her PhD student, Raymond Gosling, who had initially been a student of Wilkins. By the end of 1952, Gosling was again supervised by Wilkins, which is why Wilkins had the photo and had every right to show it to Watson. Whether that was wise is another matter.

Instead it was something much more significant: a set of values, established by Franklin on the basis of her detailed studies of these photos, and which were contained in a report by the King’s lab to the Medical Research Council, which provided Watson and above all Crick with the key. This report, including Franklin’s data, was handed to Watson and Crick by members of the Cambridge lab where they worked at the end of 1952.

Franklin was not consulted, but the data were not secret, or private. Indeed, she had presented similar data 15 months earlier at a talk Watson attended, but he did not take notes, and by his own account spent his time musing about her dress sense. But the Cambridge crew could and should have asked her, and were wrong not to. Given her previous (and understandable) complaint to members of Wilkins’ group that they should not interpret her data for her, it is perhaps no surprise that she wasn’t asked – it seems very likely her answer would have been ‘no’.

Once Crick saw the data, he understood their significance in a way that Franklin initially did not do – he had been working on the way that helical molecules diffracted X-rays, so his mind was prepared to understand them in an instant. That encounter of a prepared mind with Franklin’s values, not Watson glancing at photograph 51, was the decisive moment.

By early March 1953, Watson and Crick had come up with the detailed double helix structure, and invited Franklin and Wilkins to come and see it. The King’s duo immediately accepted it as correct – in a way it just had to be true, it was so beautiful. The structure was published in Nature shortly thereafter, as a set of three articles, the other two being from Franklin (including photograph 51) and from Wilkins – they provided the empirical justification (but not proof) for Watson and Crick’s theoretical model.

In a piece of understatement, the Watson and Crick paper acknowledged that ‘We have also been stimulated by a knowledge of the general nature of the unpublished experimental results and ideas of Dr M. H. F. Wilkins, Dr. R. E. Franklin and their co-workers’.

A significant element in the discovery of the double helix was the magic of Watson and Crick’s interaction. It is striking that, unlike them, Franklin did not have anyone she could talk to and argue with about her work, and in particular did not get on with Wilkins (I imagined what might have happened if they had been able to work together in a previous post).

And yet, as she was finishing up at King’s, getting ready to move to Birkbeck, she continued, all on her own, to analyse her data. Her lab books reveal her astonishing solitary progress. By 24 February, using Crick’s method published the year before, she had realised that DNA was a double helix, that the bases on either strand were complementary and interchangeable (A with T, C with G), and above all she realised that, as she put it ‘an infinite variety of nucleotide sequences would be possible to explain the biological specificity of DNA’.

In that final, key respect, she was ahead of Watson and Crick’s first explicit statement of this fundamental aspect of DNA structure, which would not be made for another 3 months (the first Watson and Crick paper had very little on function, referring merely to replication).

Making key contributions to the structure of two important viruses, single-handedly approaching the double helix structure of DNA, those are remarkable contributions by a woman scientist at a time when women were relatively rare in the global scientific community. It is just slightly frustrating that her contribution is ‘reduced’ to DNA, and her role in that discovery is framed in the way Watson self-servingly portrayed it.

But, I suppose, it’s better that Franklin is remembered in a distorted, albeit positive way, than solely through Watson’s portrayal in The Double Helix. The simplicity of the story of ‘she took a photo, Watson stole it, she was robbed’ has an undoubted power, even if it isn’t strictly true. It can be a way for young people to come to grips with the science and the history of science, undoubtedly driven by understandable irritation at Watson’s views, both in his account, and subsequently. For example, it is hard to be grumpy about this rap battle between Franklin and Watson and Crick, written and performed by 7th graders. The historical detail is not precisely right, but still. . .

The iconic power of photograph 51 is probably too cemented to dislodge, and she did, after all, use it in her Nature paper of 1953. So, my irritation at the UK’s commemorative 50p piece is subsumed by the fact that it is a beautiful thing, and better this than nothing: 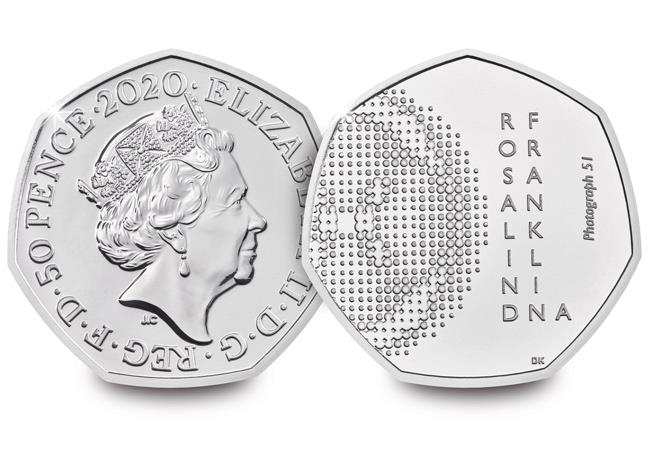 But remember: it was her data that counted, not that photo. The person who made all the fuss about the photo was Jim Watson, in his novelised account. In that respect, our memory of her is still determined by his account, which should not be taken as historically accurate except where it can be independently verified. Above all, she did so much more than provide the data that were used to discover the double helix. With luck, at her bicentenary a more balanced view will dominant popular culture.

* Two exceptions are this week’s editorial in Nature and an article in the Times Literary Supplement by the historian of science Patricia Fara. Both are excellent brief accounts of Franklin’s life that, as Fara’s title puts it, go ‘beyond the double helix’. Strikingly, both still refer to that photo, rather than the key role of Franklin’s data. That tells you all you need to know about the grip of Watson’s account.

If you want to know more about Franklin, Brenda Maddox’s biography The Dark Lady of DNA is excellent. My book Life’s Greatest Secret (2015) contains a detailed chapter on the double helix and Franklin’s contribution.