Reader Doug Hayes is back with his continuing feature of “The Breakfast Crew,” showing birds that come to his backyard feeders. Doug’s captions and IDs are indented, and you can enlarge his photos by clicking on them.

Here are the latest Breakfast Crew photos. I’ve been doing battle with the squirrels who raid the bird feeders, driving away the birds and devouring all the seeds. I recently found a solution: a habanero pepper extract that can be mixed with birdseed. Apparently, birds are immune to the stuff, but mammals get the shock of their lives when they get a taste of capsaicin. One or two squirrels seem to have developed a tolerance for capsaicin, but the majority of the critters seem to want no part of the treated bird seed. This month also features a pair of rare birds that I had never seen before.

The Tufted Titmouse (Baeolophus bicolor) is a common bird around the yard. They are very skittish and usually snatch a seed from the feeder and take it into the trees to eat. A few will remain on the perch, place the food item between their feet, and eat. 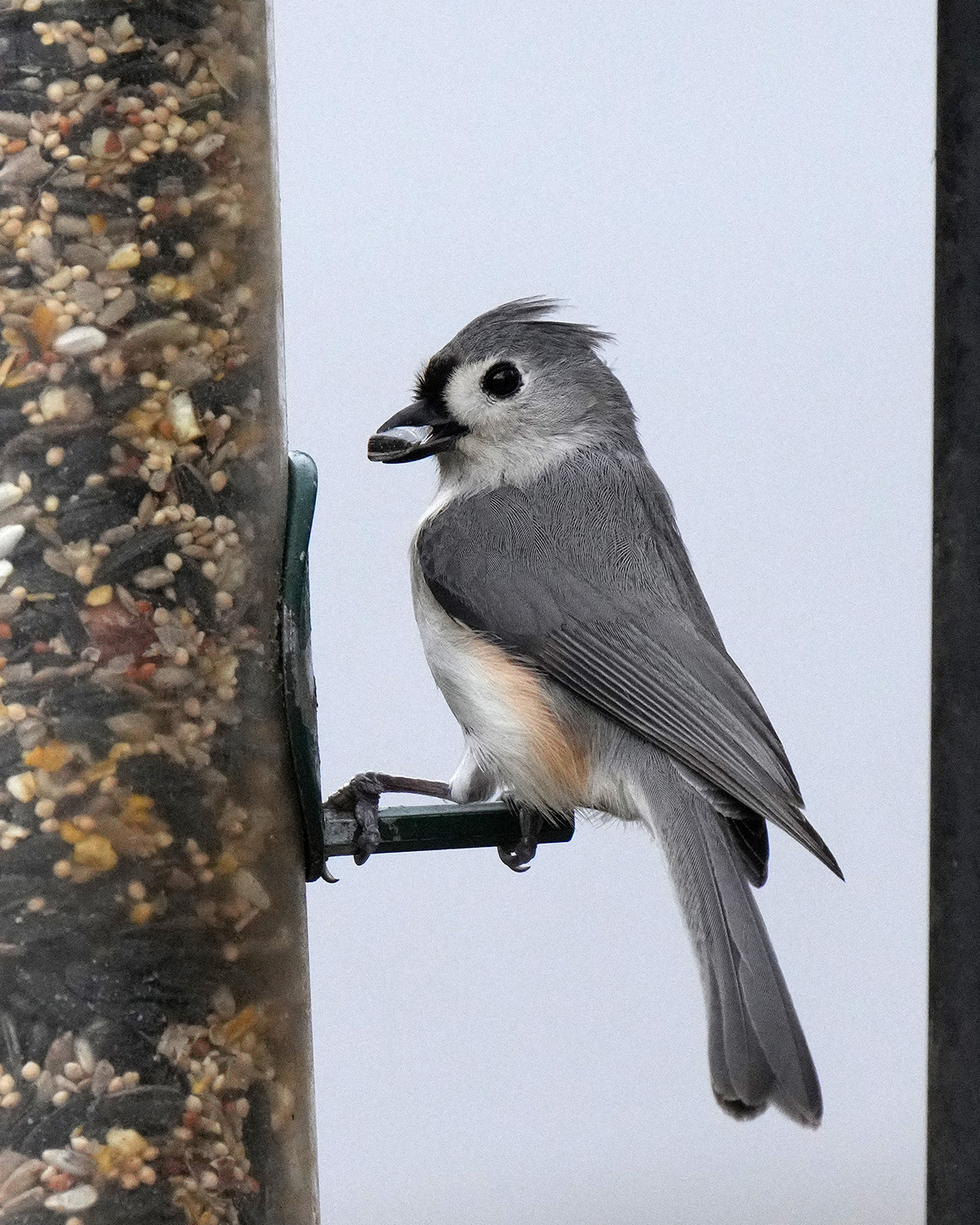 White-Throated Sparrows (Zonotrichia albicollis) are also a common sight throughout the neighborhood. 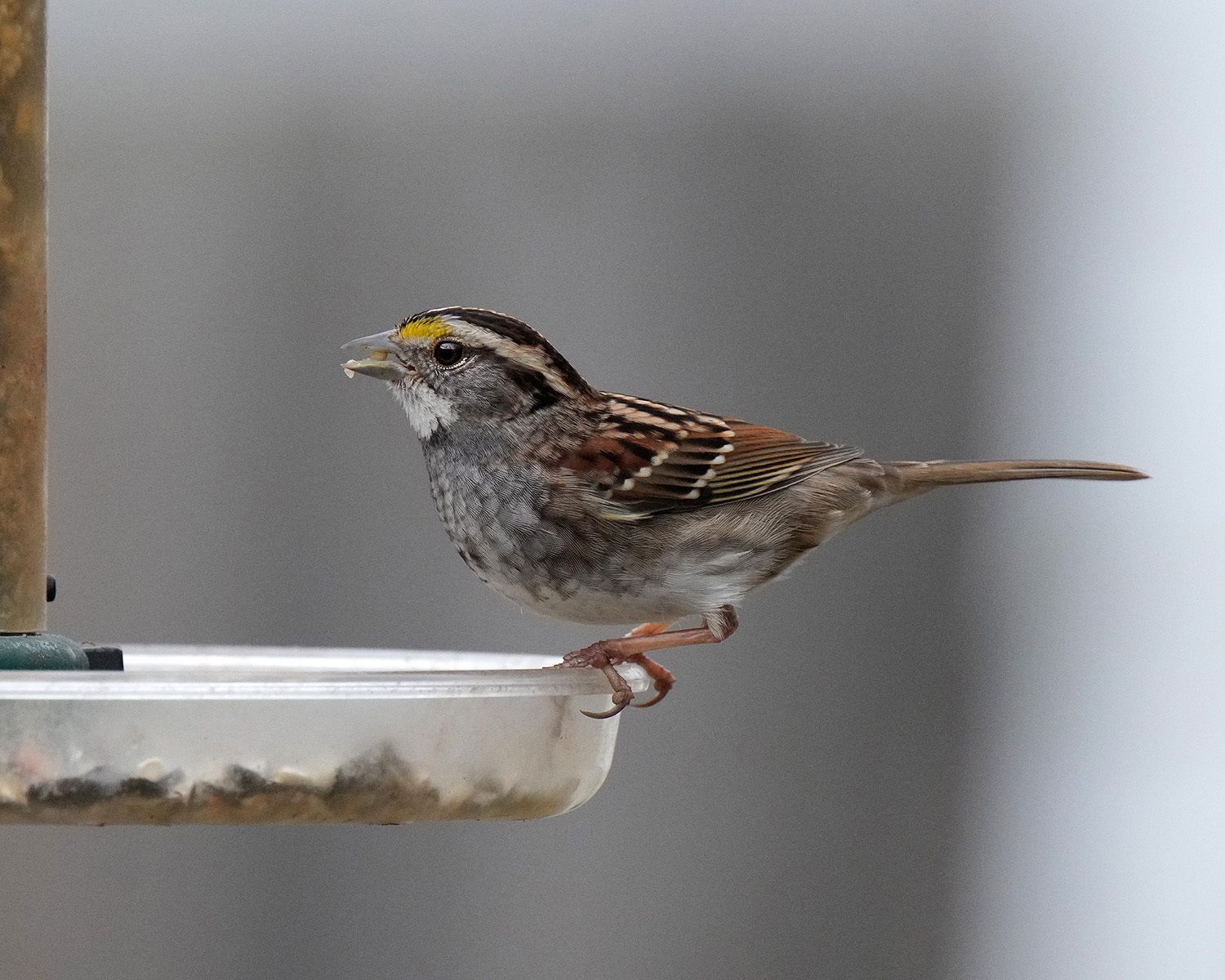 The Common Grackle (Quiscalus quiscula) seems to have replaced the Starlings this year. Last year we had dozens of Starlings, but this year there are only a few in the neighborhood. This Grackle is not letting a little rain deter him from a free meal. 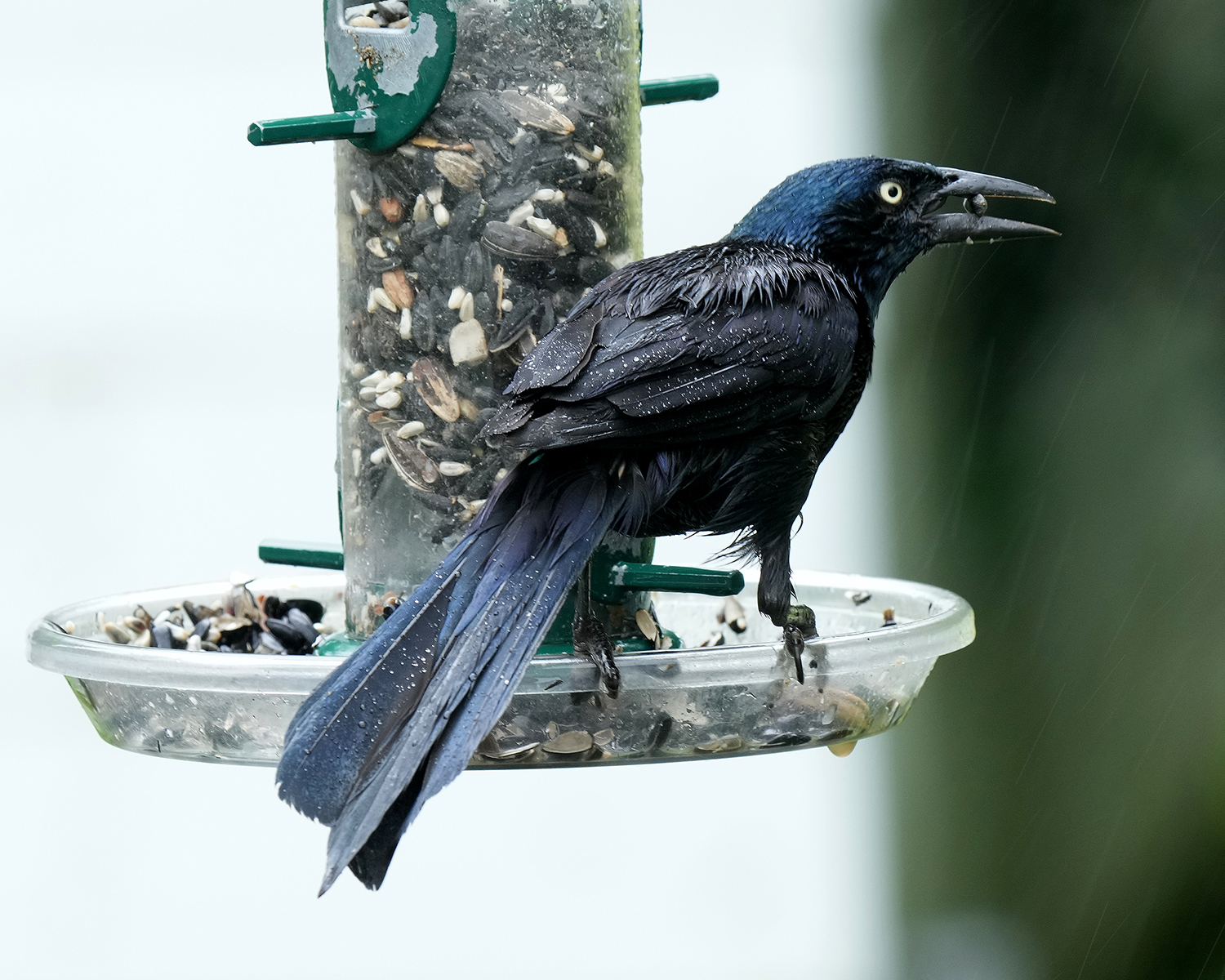 A female House Finch (Haemorhous mexicanus) feeding a fledgling. We’ve had quite a population explosion in these birds this year. House Finches are more numerous than Sparrows throughout the area. 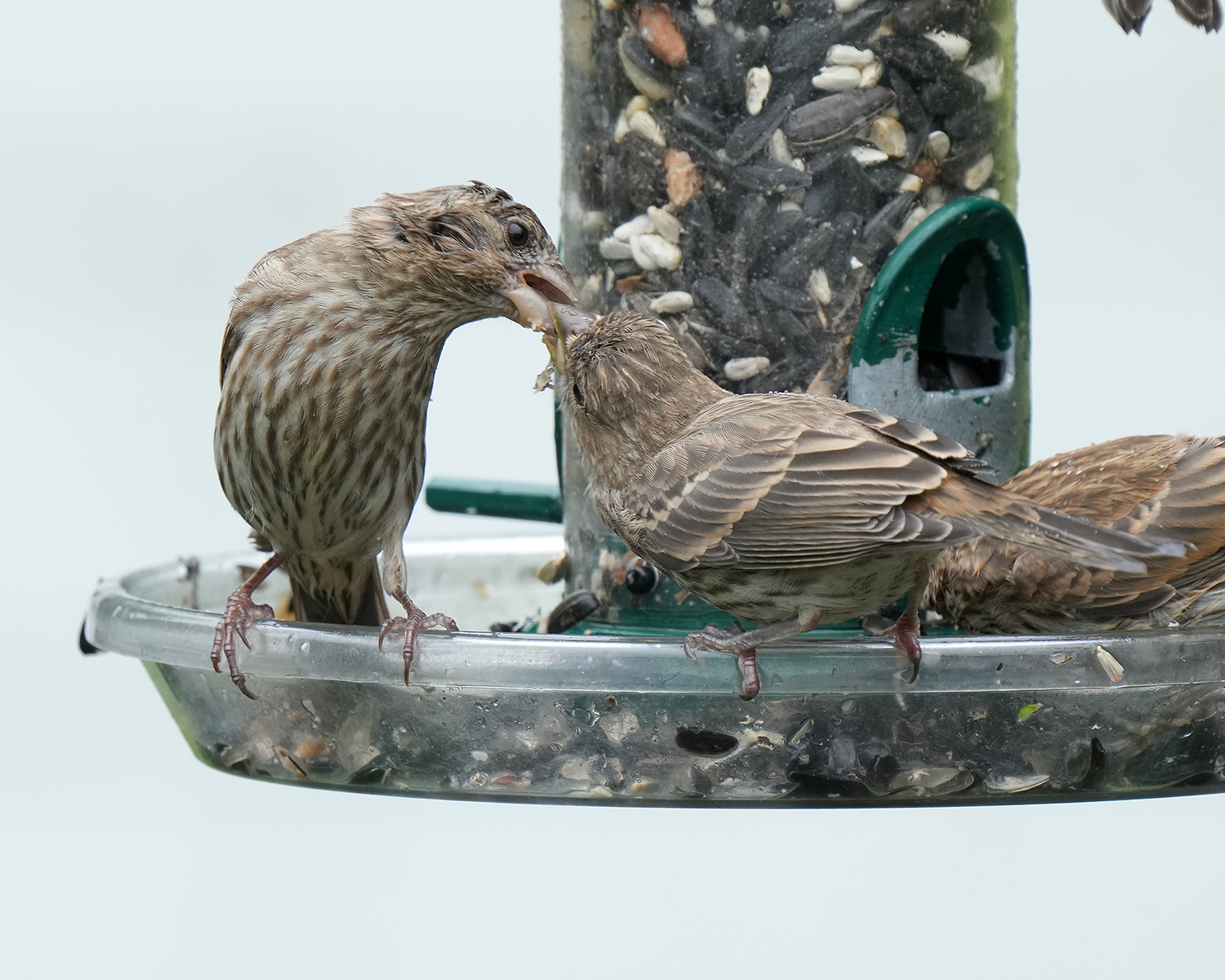 Eastern Towhees (Pipilo erythrophthalmus) usually stick to heavily wooded areas on the edge of the city. A pair of them has moved into the neighborhood and frequent the yard and feeders. This one is a female. 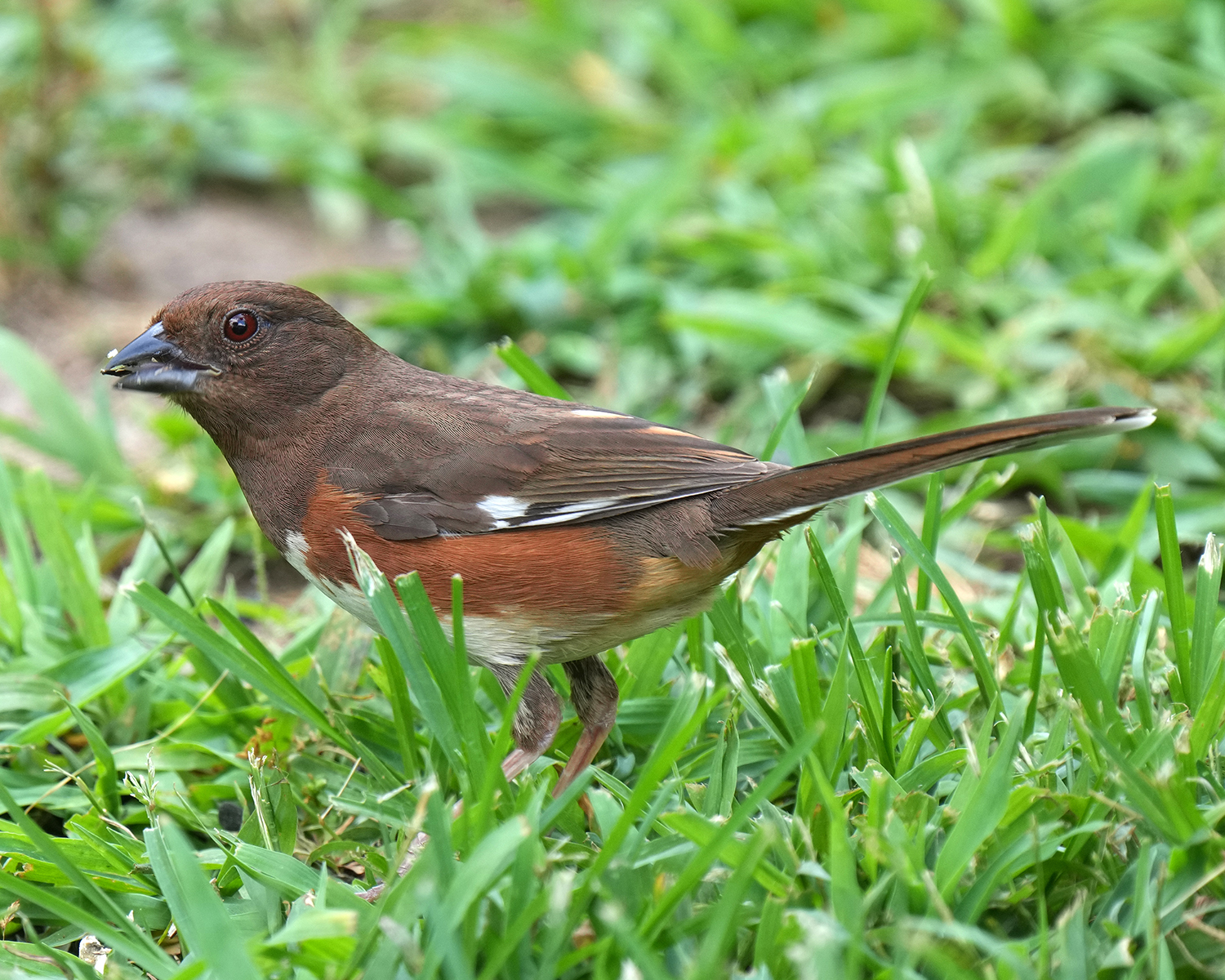 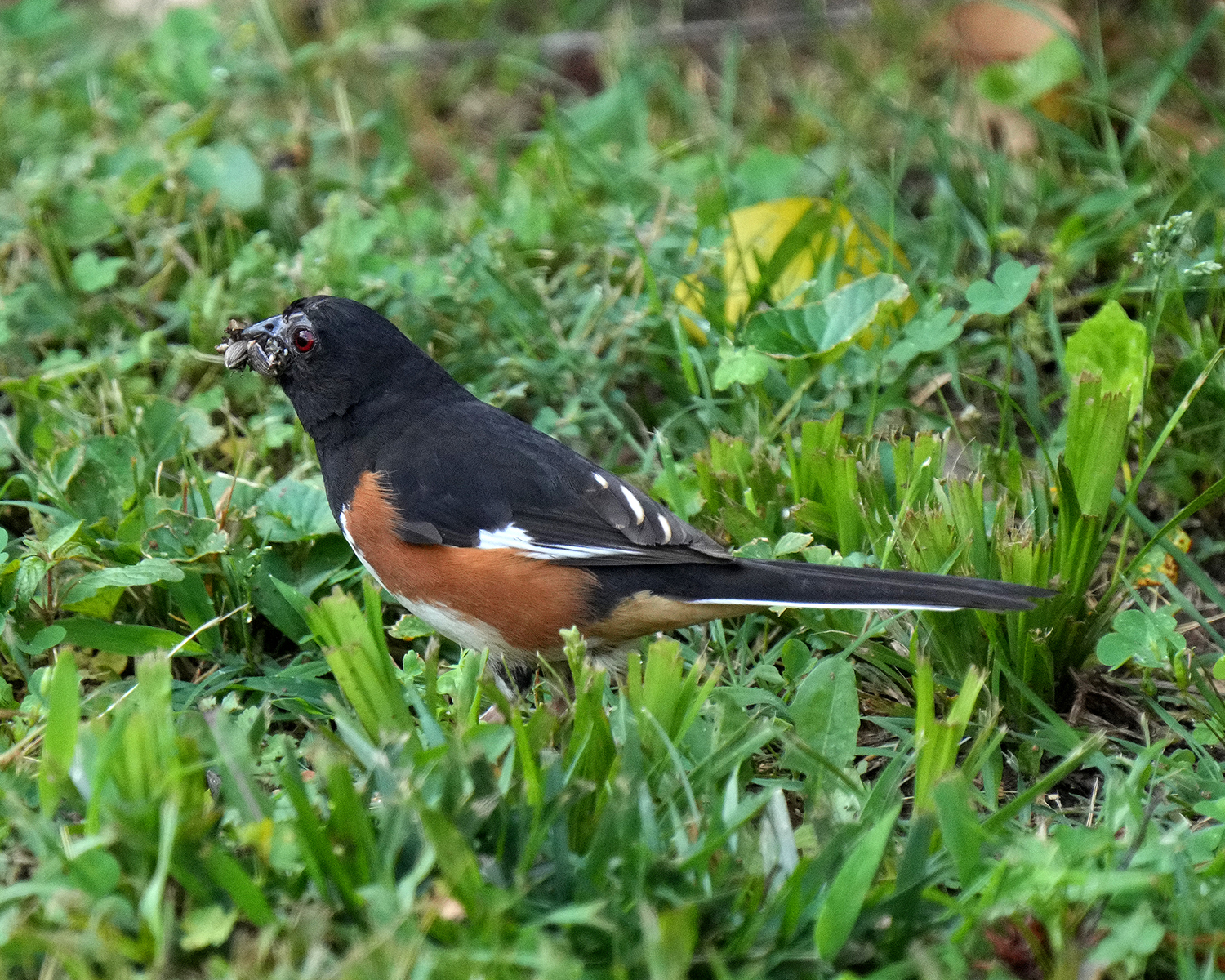 While not as spectacularly colored as the male, this female Northern Cardinal (Cardinalis cardinalis) is pretty spiffy looking: 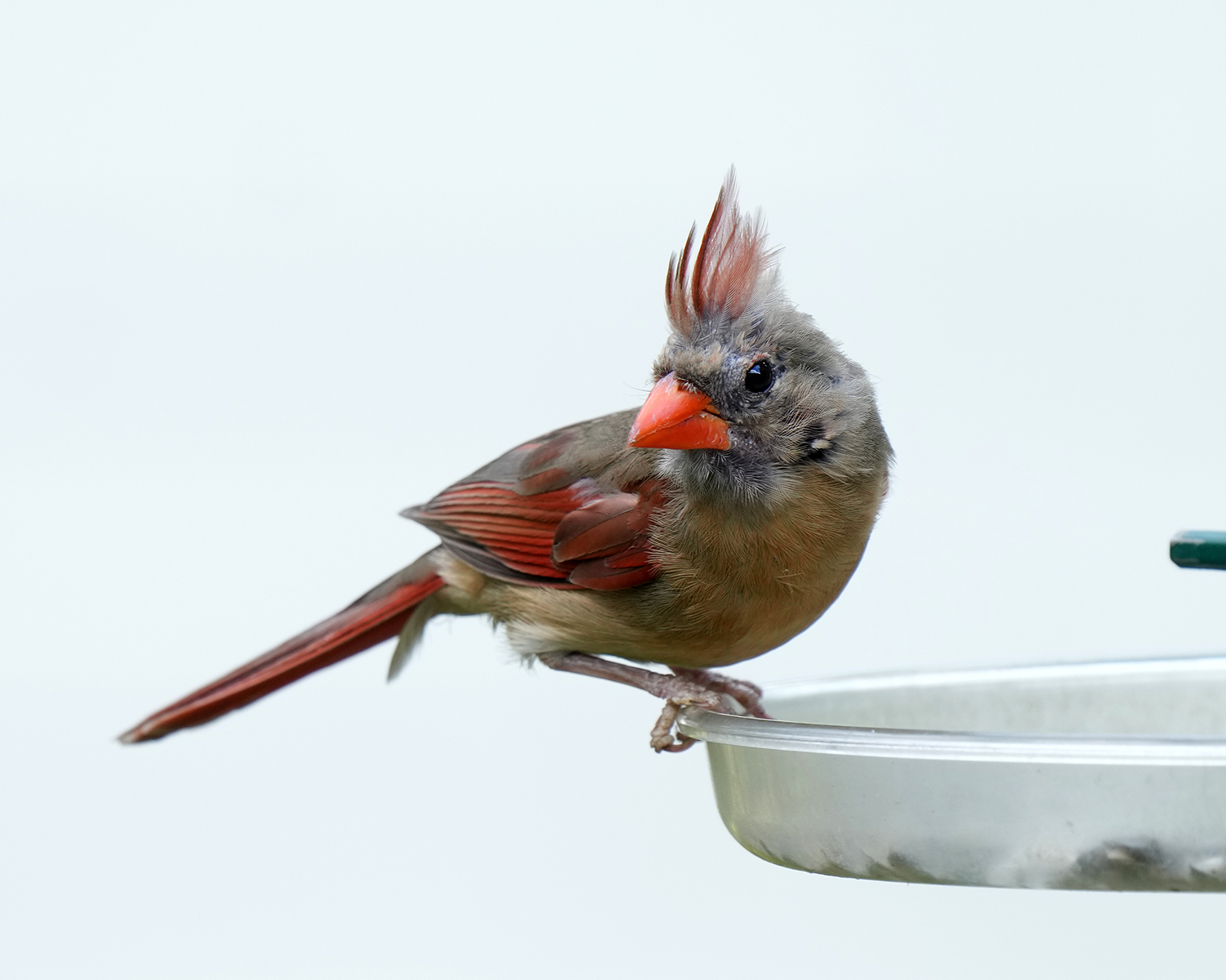 This male Northern Cardinal has been around for a couple of years now. He is actually more orange than the normal red of most males. 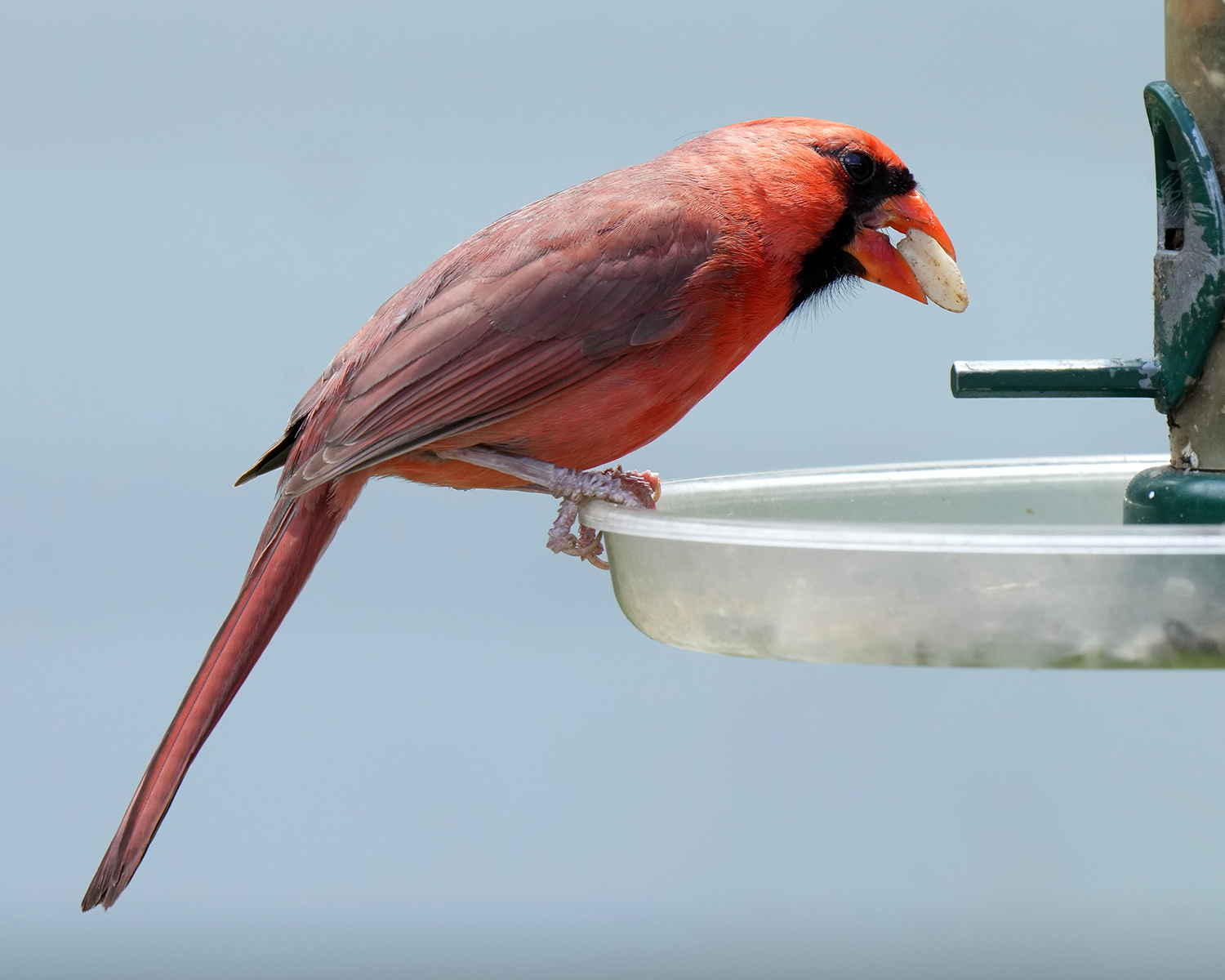 The Gray Catbird (Dumetella carolinensis) frequents the yard from time to time. 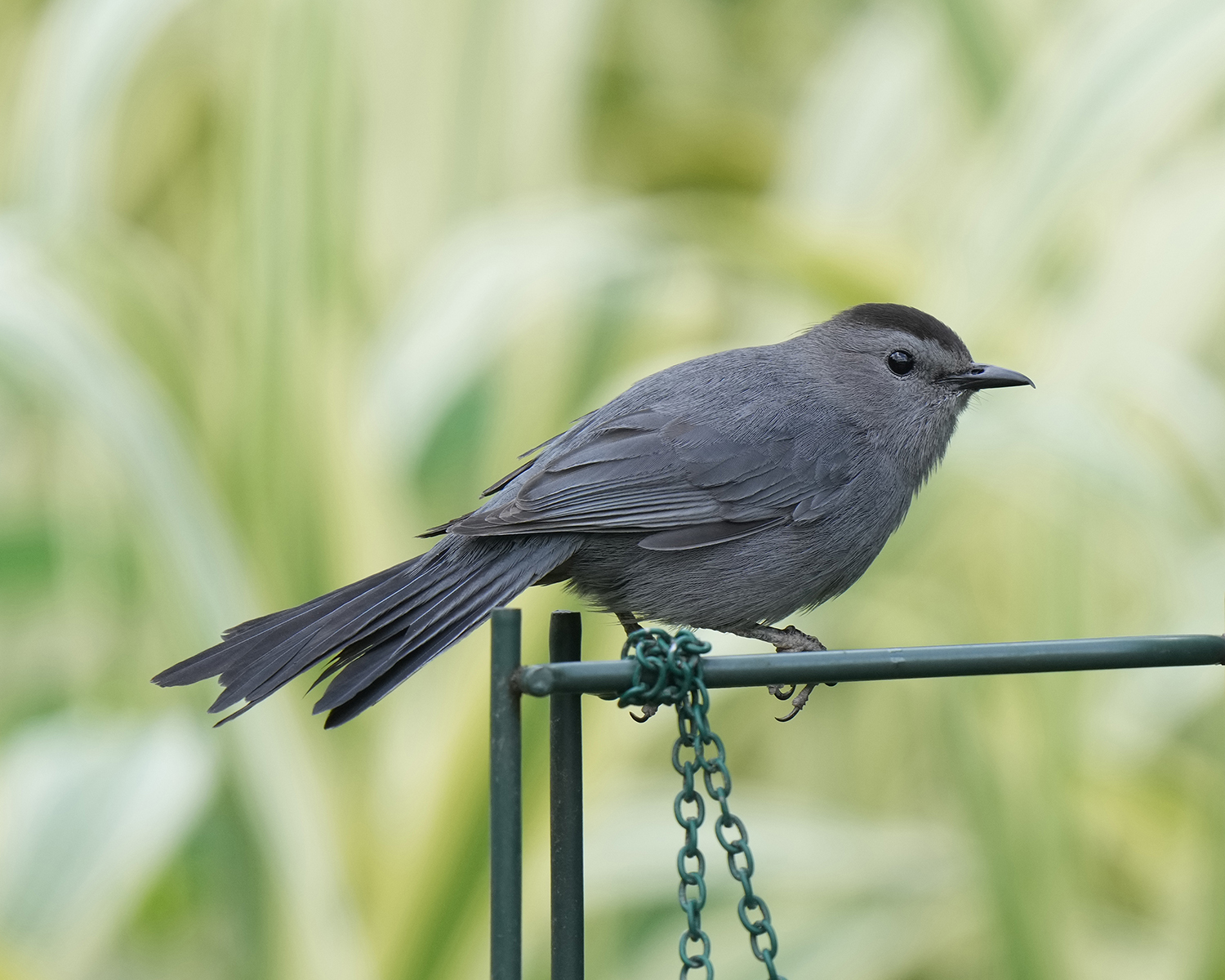 A female House Finch (Haemorhous mexicanus) coming in for a landing. 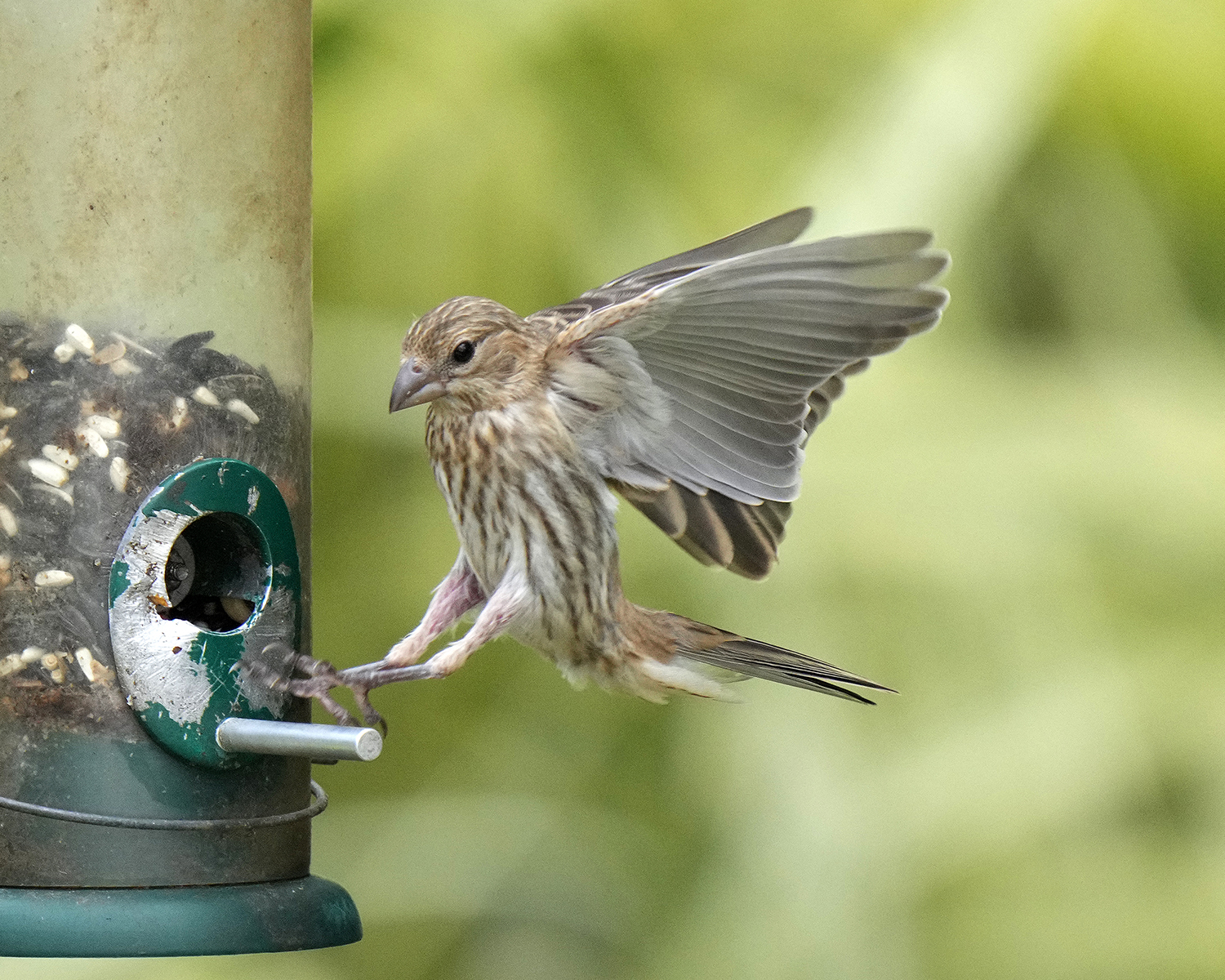 Blue Jays (Cyanocitta cristata) are another bird that usually keeps to the wooded areas. From time to time, a few will come to scavenge seeds around the feeders. A bit skittish, they are hard to photograph. 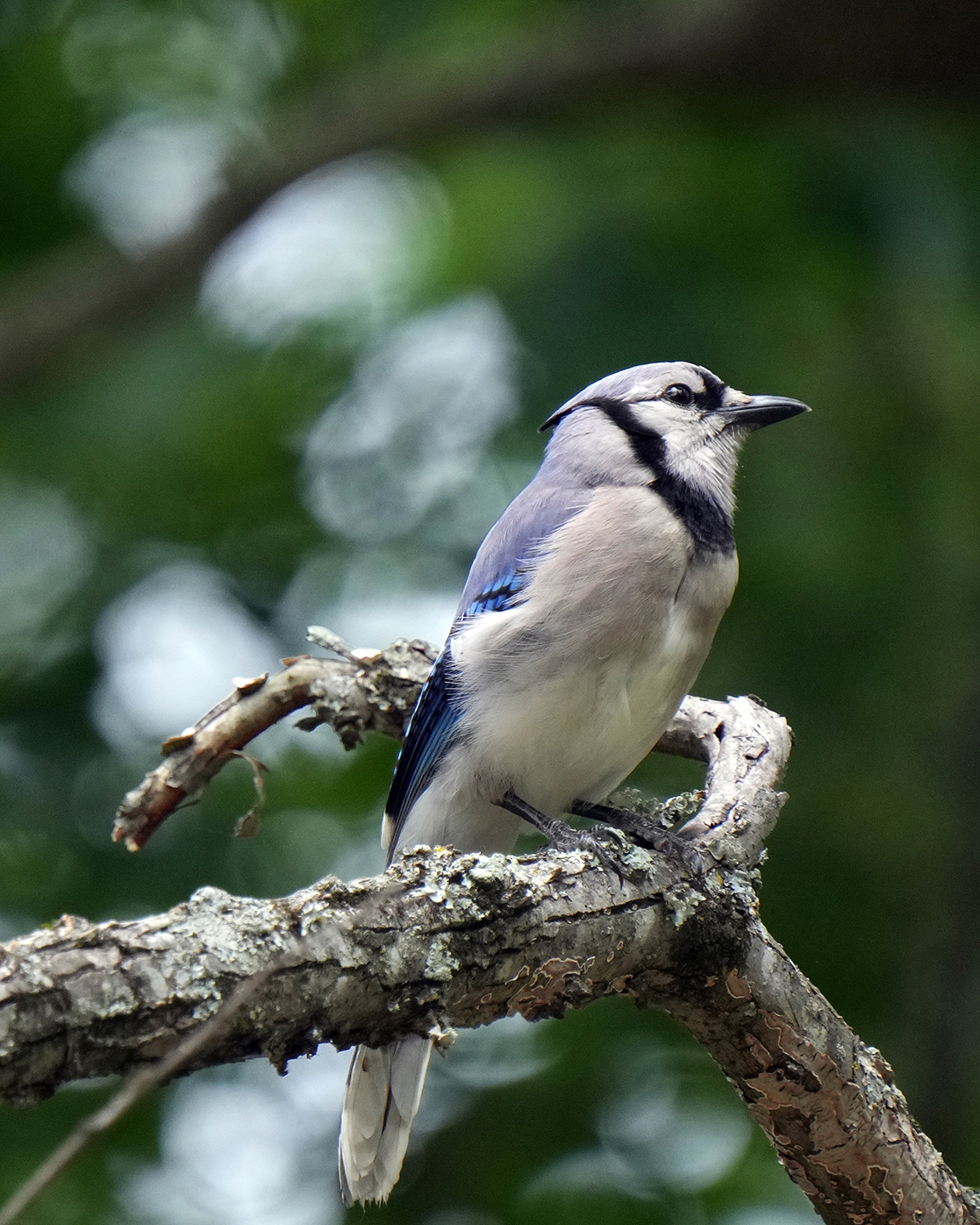 We have also had a boom in the Carolina Wren (Thryothorus ludovicianus) population this year. It is not unusual to see ten or more show up for breakfast and throughout the day. 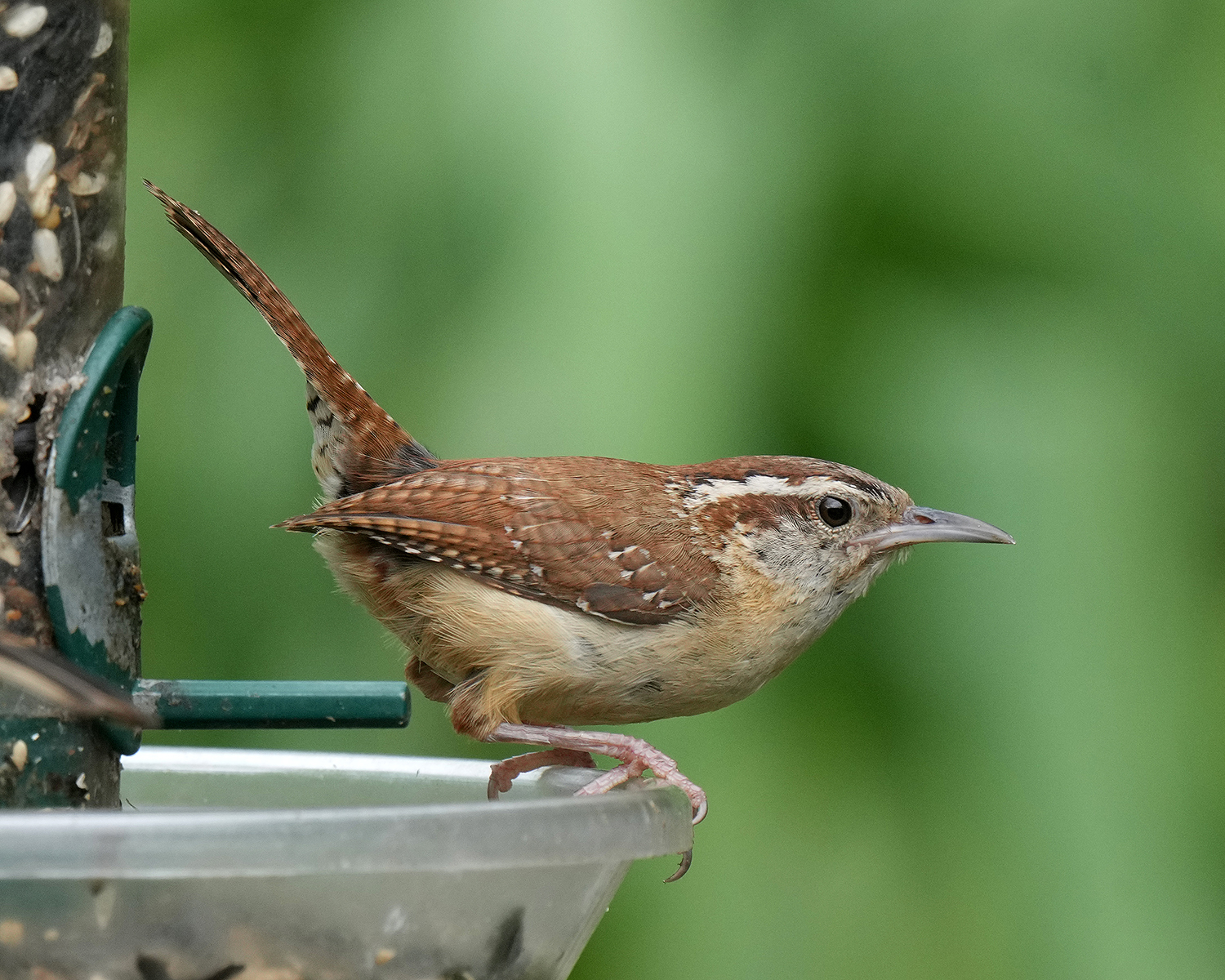 This American Robin (Turdus migratorius) has learned to eat from the feeders instead of scavenging seeds from the ground like the others of his/her kind. This one also eats from the suet feeder. 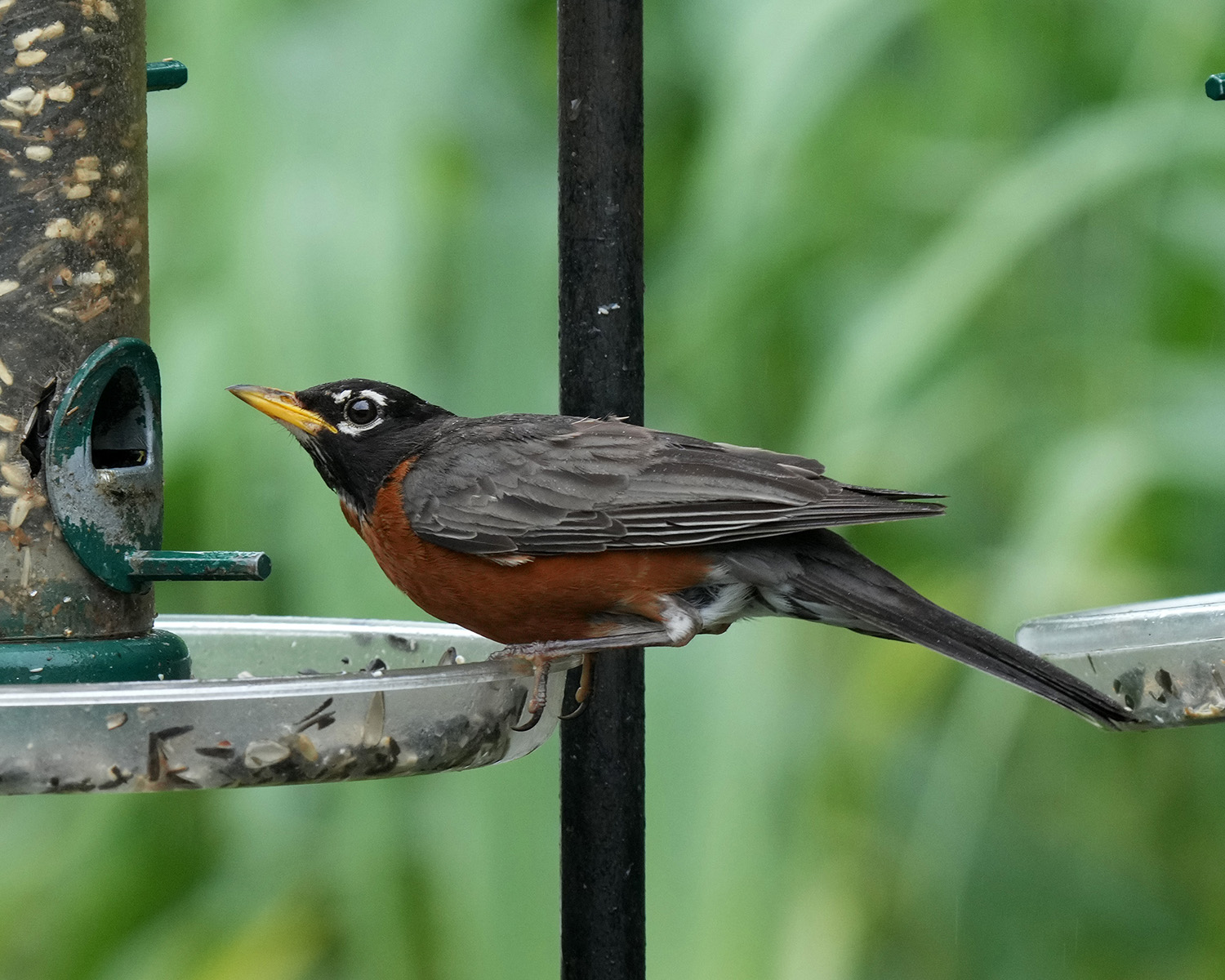 Male and female House Finches (Haemorhous mexicanus) hanging out in the rain. While most birds eat and run, the House Finches will stick around for a while unless driven away by competing birds. 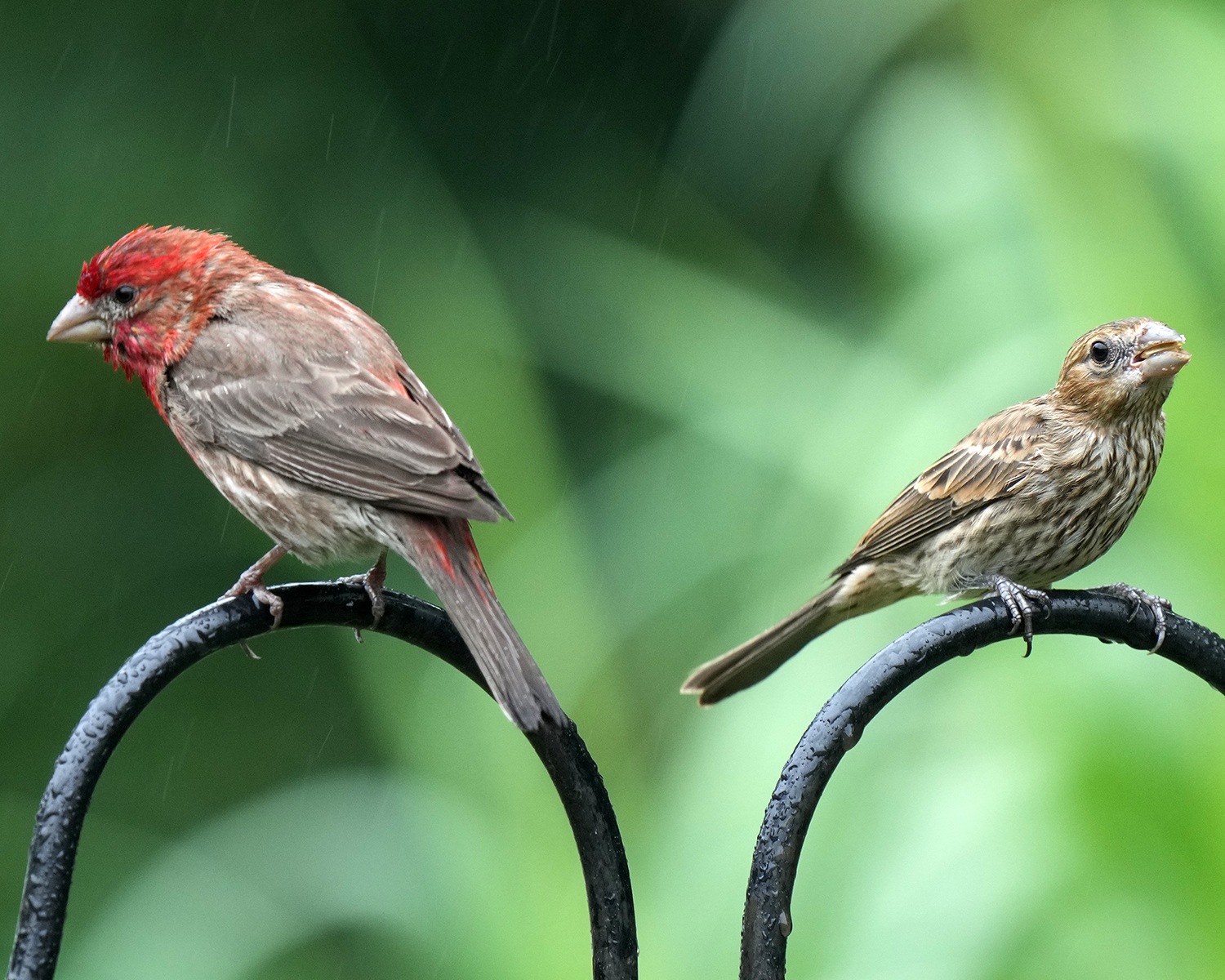 Bonus bird #1. This Red-headed Woodpecker (Melanerpes erythrocephalus) was photographed on one of my birding trips to Chesterfield and Henrico, two counties just outside of Richmond. Red-headed Woodpeckers used to be common throughout the eastern United States, but populations have been declining in recent years due to clearing of the dead trees the birds use for nesting, and to competition from Starlings, which also nest in tree cavities. 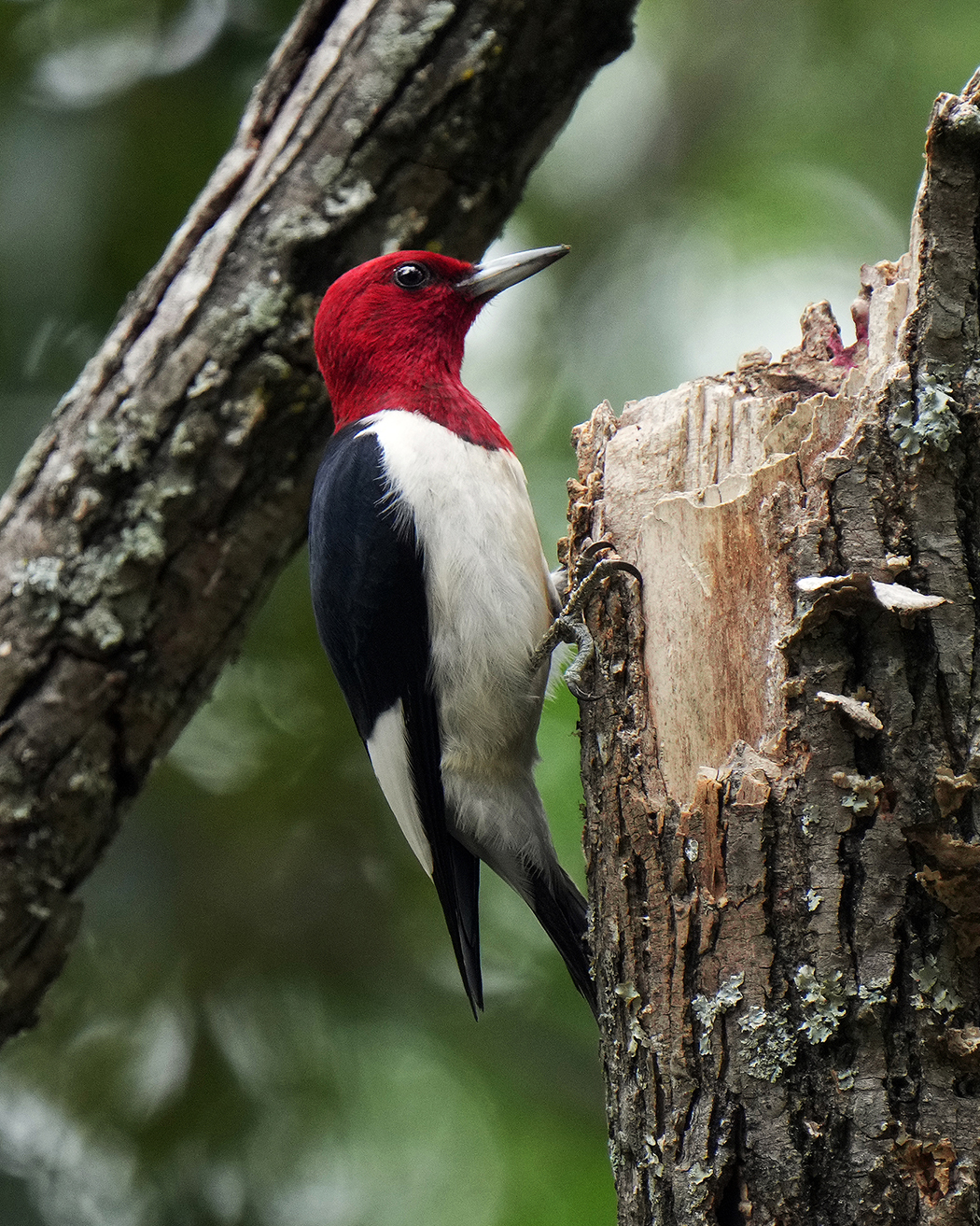 Bonus bird #2 My neighbor and I got word that Anhingas (Anhinga anhinga) had been spotted in the Chamberlayne Swamp, a marshy area just outside the city. Anhingas range from the swamps and coastal areas of the southeastern United States into Mexico and throughout South America. North Carolina is about as far north as these birds are usually seen, but there are at least six adult Anhingas here in the Chamberlayne Swamp and several fledglings that hatched about a month ago. Anhingas are also called the “snake bird” from its habit of swimming with only the head and neck above water.  They are also called the “water turkey” because the shape of its tail feathers are similar to those of the wild turkey. 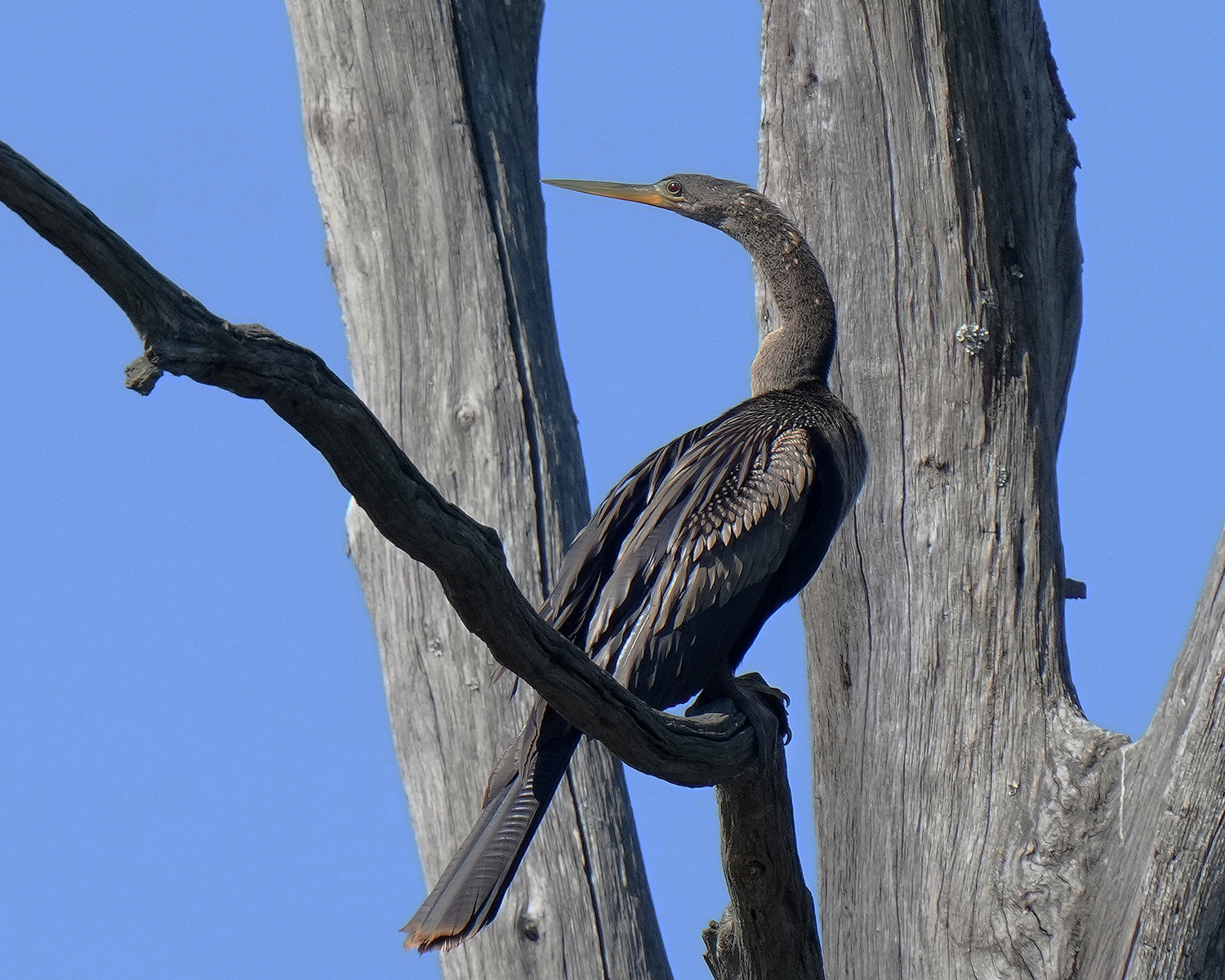 Photographic information. Sony A1 mirrorless camera body, Sony FE 200-600 zoom lens + 1.4X teleconverter, Neewer gimbal head mounted on a Manfrotto 290 medium weight tripod for the Anhinga photo. All other photos handheld. Camera set to bird eye autofocus, auto ISO with a range of 250-5000 ISO depending on lighting conditions. The Anhinga photo was shot with the aid of 2X digital zoom combined with the 1.4X teleconverter and the camera set in crop sensor mode for a reach approximating that of a 2,500mm lens.