I keep saying that one good thing that the Trump administration did was to reform of the disciplinary procedure for sexual assault and harassment on campus as stipulated by Title IX (see posts here).  Those determined to maintain that everything that the Trump government did was bad has to argue that the DeVos reforms, which really created a fairer procedure for prosecuting these accusations, was somehow bad. But DeVos’s reforms included allowing the accused to know the charges against him (yes, usually a male), giving the accused the right to face the accuser, and with a lawyer or “helper”, and allowing a form of cross-examination. Further, in many cases, the investigator was the same person who judged whether the accused was guilty or not. That was ditched under DeVos.

Finally, the DeVos rules stipulated that guilt required not just a “preponderance of evidence” (greater than a 50% that the accused did the act) but a higher bar: “clear and convincing evidence”. That is, conviction required that it must be “highly probable or reasonably certain” that harassment or assault was done by the accused. This is conventionally interpreted to mean a likelihood of 75% or higher.

When I took a poll of what standards readers thought were best, they went with “take it to the police first”, and only then, if the accused was convicted, would they go with the “clear and convincing evidence” standard in a college investigation. In fact, since these are crimes (with the exception of some forms of what is defined as “harassment”), that’s a good idea.

Here are the results of our poll (note: this is not a scientific poll!): 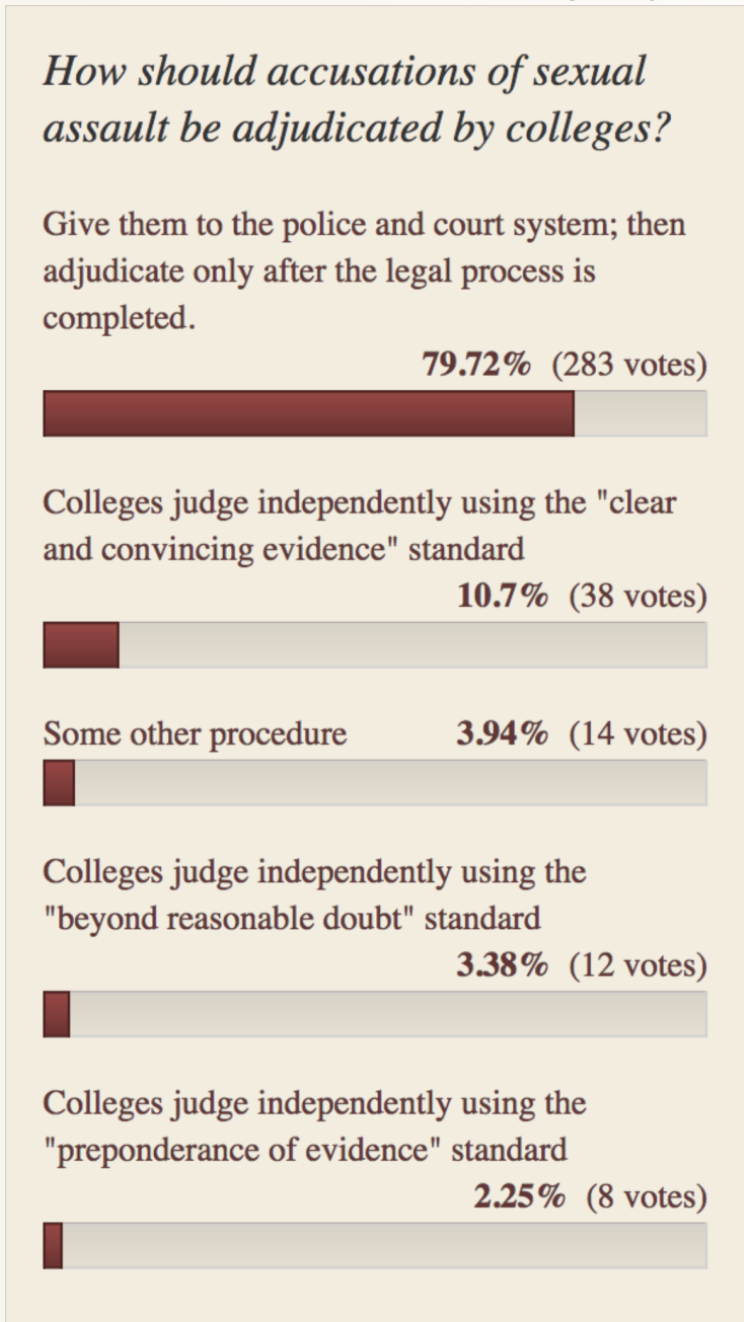 And as I noted in June, one of the bad things that the Biden administration is now doing is rolling back DeVos’s reforms to the days when the rules (suggestions, really) were  codified in a “Dear Colleague” letter from Obama.

Now Emily Yoffe, whose writings I’ve found eminently sensible and who specializes in writing about Title IX and accusations of sexual misconduct, has a piece on Bari Weiss’s site agreeing that Biden’s changes are for the worse. Click to read (it’s free, but  subscribe if you read Weiss often).

A few quotes. I like this one because I’ve agreed with it (emphasis is mine):

Joe Biden has fulfilled one of the first promises he made upon becoming president. His administration has just announced a comprehensive set of regulations—701 pages worth—that will gut due-process rights for college students accused of sexual misconduct.

. . .Then Donald Trump was elected president, and Betsy DeVos, decided to reform what the Obama administration had done. In one of the most uncharacteristic acts of that chaotic presidency, DeVos went through the lengthy and burdensome process of writing actual regulations (the Obama administration had only issued “guidance”). The rules she released were, on balance, careful and thorough, providing necessary protections for the rights of both accuser and accused. I spent several years reporting on what was unfolding on campuses, and I wrote at the time that the DeVos regulations were an example of an immoral administration doing the moral thing. (See, for example, here and here.)

The DeVos rules went into effect in August of 2020, in the midst of campus covid shutdowns, so they have hardly had a chance to be tested. Now they will be struck. They will be replaced by some of the most pernicious procedures of the Obama era. (These dueling Department of Education regulations come under the aegis of Title IX, the fifty-year old federal law that prohibits sex discrimination in education.)

And so it’s back to the bad old days:

The new rules recommend a return to a “single investigator” model that was barred under the DeVos reform. This means one administrator can act as detective, prosecutor, judge, and jury on a Title IX complaint. The new rules also undo many of the procedural protections for the accused—including the right to see all the evidence, inculpatory and exculpatory, gathered against him. “It’s an evisceration of the procedural protections given to the accused,” says historian KC Johnson, co-author of The Campus Rape Frenzy: The Attack on Due Process at America’s Universities.

Under the DeVos rules, adjudication of a formal complaint required a live hearing be held that included cross examination. The Biden administration lifts this obligation. The Biden rules also call for a return to investigations initiated by third parties, even if based on rumors or misunderstandings, in which male students can be subjected to Title IX proceedings over the objection of their female partners. (Robby Soave at Reason has a good summary of the Biden proposals.)

“It’s a document that validates all of the concerns we had about due process and free speech being on the chopping block,” says Joe Cohn, legislative and policy director at The Foundation for Individual Rights and Expression.  He adds that the administration is giving schools the blessing of the Department of Education “to cut many corners that are essential for fundamental fairness.”

I can’t imagine how people could say that the new rules make the process fairer than using the DeVos rules. How can it be fair when the prosecution is identical to the jury? How can it be fair to not see all the evidence against you? How can it be fair to prohibit cross examination of the accuser? After all, this process can ruin your life; so it must be adjudicated with at least the care of a court case. (And the standard for legal guilt is even harsher: guilt beyond a reasonable doubt.)

As predicted, men found guilty under the Obama-era procedure began filing lawsuits against their colleges for “unfair treatment”. There have been around 675 of these, and many that have been adjudicated have decried the college procedures and fined the universities.  That itself should raise a red flag for Biden’s proposed regulations.

There are other things discussed in Yoffe’s piece, including Biden’s stipulations about gender identity, participation in sports, and the new industry of hiring thousands of Title IX bureaucrats, but I’ll leave you to read and judge these issues for yourself.  Here’s just one more quote:

But no matter what the new regulations demand, it is likely that at the end of the Biden administration, the president will have to concede that he failed to make a dent in accusations of sexual misconduct on campus. This won’t be because campus administrators are indifferent to mass criminal activity by male students. It will be, in large part, because of the bureaucratic expansion the Obama administration instigated. They helped establish an industry of Title IX officials, investigators, lawyers, and consultants.

. . . Then there is human nature itself. Young men and women are going to engage in sexual exploration. Sometimes it’s going to go badly. In many cases, no matter how many hundreds of pages of regulations are churned out by the federal government, turning to Title IX bureaucrats is not going to make things better.

I’m a Democrat, and I voted for Biden. But I am not going to lionize everything that his administration does. The return to the old Title IX regulations for trying cases of sexual misconduct is one of the Biden administration’s clear mistakes.