Today we have another combination story and biology lesson from Athayde Tonhasca Júnior, this time recounting how bumblebees can use electricity and the buzzing of their wings to find flowers and effect pollination. Athayde’s tale is indented, and photos, which you can enlarge by clicking, are attributed.

May the Force be with the bee

If we are asked how a bee finds a flower, we think of smells, colours, shapes and textures. These are important sensory signals, but there is another one whose relevance we are beginning to understand: electricity.

The platypus (Ornithorhynchus anatinus), a few fish and amphibians, and some ants, cockroaches, mosquitoes and fruit flies have the ability to detect external electric forces. But vertebrates need water as a conductive medium, while most insects respond only to unusually strong electric fields such as those generated by high voltage power lines. Bumble bees, however, have a sparking story to tell.

Now and then the thunder from a lightning bolt or the shock from a car door jolts us to the realisation that we are components of the Global atmospheric electrical circuit; our world is an immense electric motor. On a calm day, the air is positively charged, while the ground surface and any object connected to it – plants included – have a negative charge. So flowers have a slight negative charge in relation to the air around them. Flying insects experience different physical forces: as a bee buzzes along, electrons are stripped off its body by friction with the air, creating a surplus of positive charges. When the bee approaches a flower, she* attracts the negatively charged pollen grains. The grains stick to the bee, sometimes jumping from the flower even before the bee lands. These electrostatic forces are a great aid to pollination.

*”She” because a worker honey bee is a sterile female. Apis mellifera sex has some quirks: embryos can develop as males through gene editing; populations of Cape honey bees (Apis mellifera capensis) reproduce without males; and some bacteria such as Wolbachia spp. change the sex of their arthropod hosts, including Hymenoptera (bees, wasps and ants). Nonetheless, their sex is typically binary, just as in Homo sapiens. 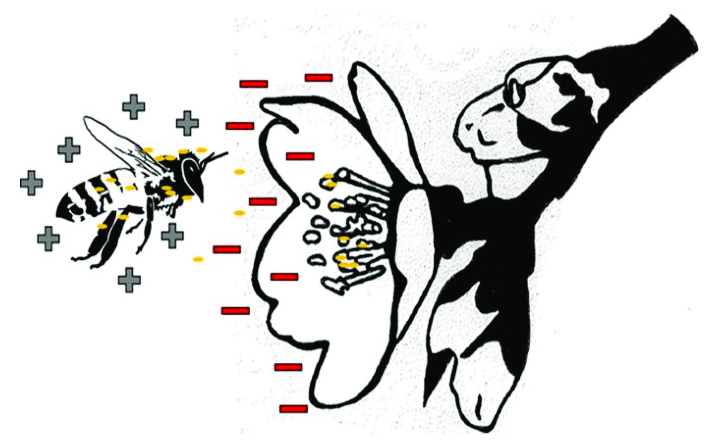 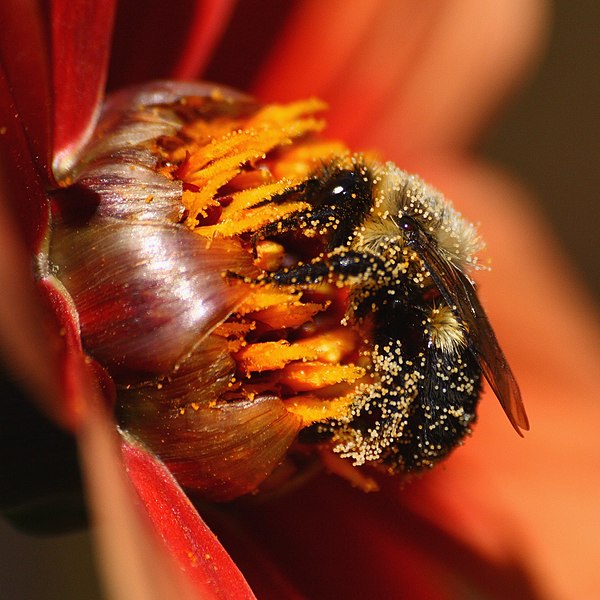 But flower power reaches shocking levels for the buff-tailed bumble bee (Bombus terrestris), and probably for other bumble bees as well: they are able to sense the weak electric field around a flower. No one knows exactly how they do it, but mechanoreceptive hairs must be involved. These special hairs are innervated at their base, so they detect mechanical stimuli such as air movement and low frequency sounds. Apparently, the flower’s electrical field moves the mechanoreceptive hairs of an approaching bee, similar to the way a wiped rubber balloon makes your hair stand on end. This hair movement is processed by the bee’s central nervous system and gives information about the shape of the electric field. It works just like Uri Geller’s mystical aura, except that the bee is not a fraud and its powers are not mystical. 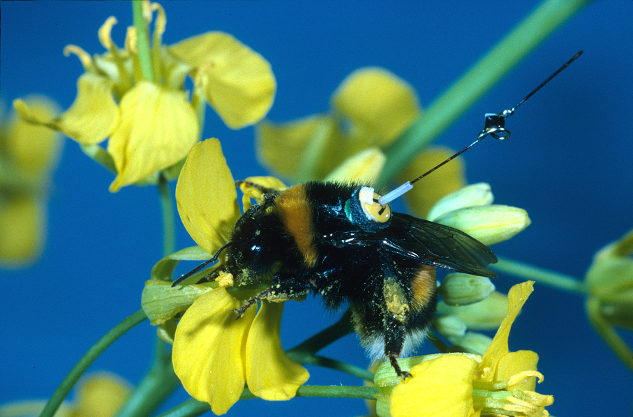 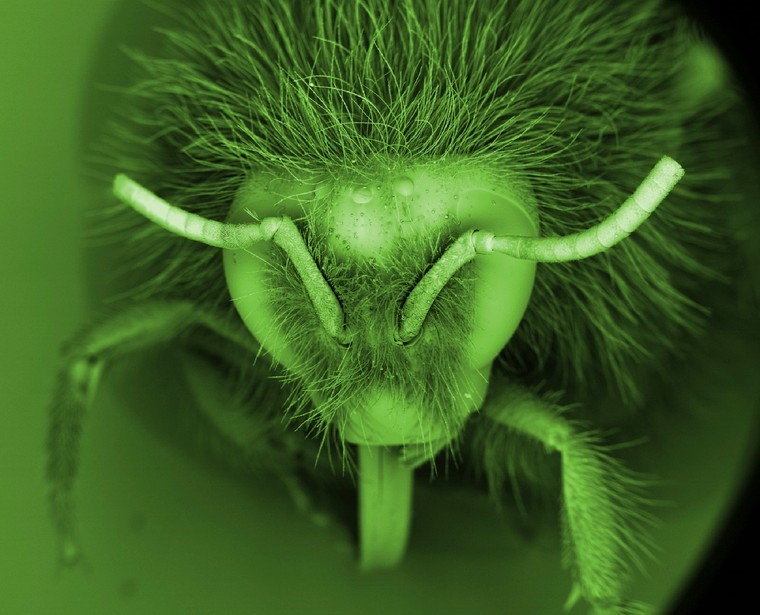 But bumble bees’ capacity to detect electric forces may go beyond recognising flowers’ sizes and shapes: they could use the information to maximise foraging trips. Once a positively charged bee lands, the flower’s electric field changes and doesn’t go back to normal for about two minutes after the bee leaves. Researchers believe that an altered field warns the next bee that the flower is temporarily depleted of nectar; it’s like turning off a ‘we are open’ neon sign. So the next bee may as well buzz off to another flower with sufficient negative charge and a decent volume of nectar.

Bees and other insects detect ultraviolet and polarized light, and use magnetic fields for navigation. Sensing electricity is one more way their world is experienced differently from ours. And the relationship of bees with physics has other important implications, some of which affect our food supplies.

For most species of flowering plants, fertilization depends on the transfer of pollen from the male anthers of one flower to the female stigma of another. For the majority of those flowers, pollen is released through the splitting open (dehiscence is the technical term for it) of mature anthers. But for approximately 6% of the world’s flowering plants, pollen is kept locked inside non-dehiscent anthers and accessed only through small openings – pores or slits – in their extremities. We refer to them as poricidal anthers.

Fig. 5. Left: stamens, consisting of filaments and anthers. André Karwath, Wikimedia Commons. Most flowers release pollen by the splitting of the anthers along a line of weakness (top right); some only do it through a small hole or pore (bottom right). 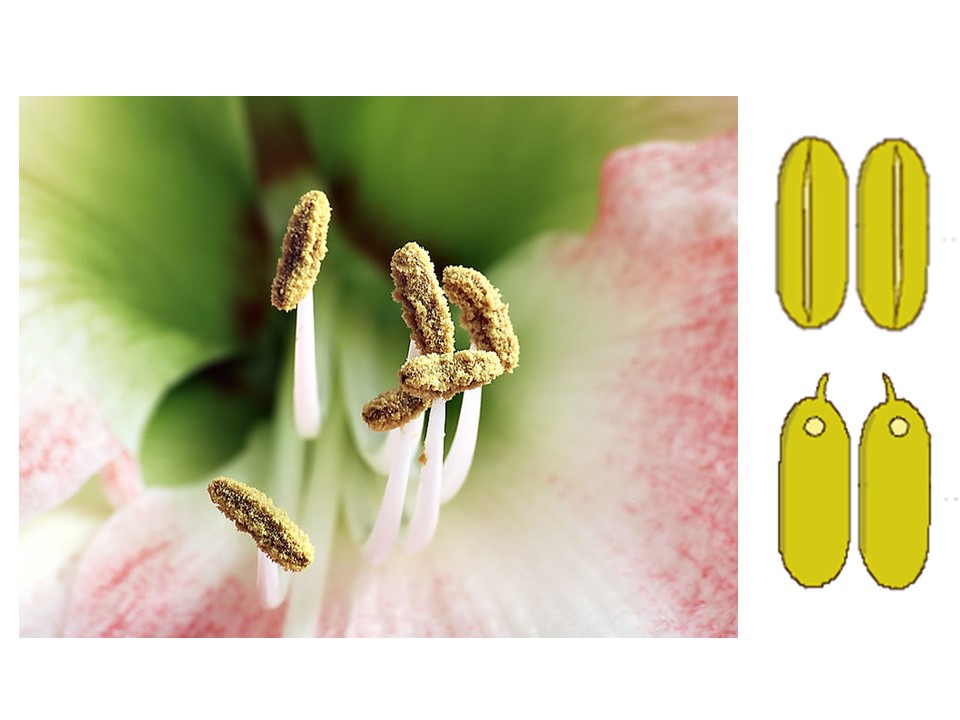 Sometimes the whole flower has a poricidal arrangement, as it is the case for the tomato and related plants (Solanum spp.). Pollen is concealed inside a cone-shaped cluster of fused stamens and can only be released though a pore at the tip. Botanist say these flowers have a solanoid shape, after the name of the plant genus. 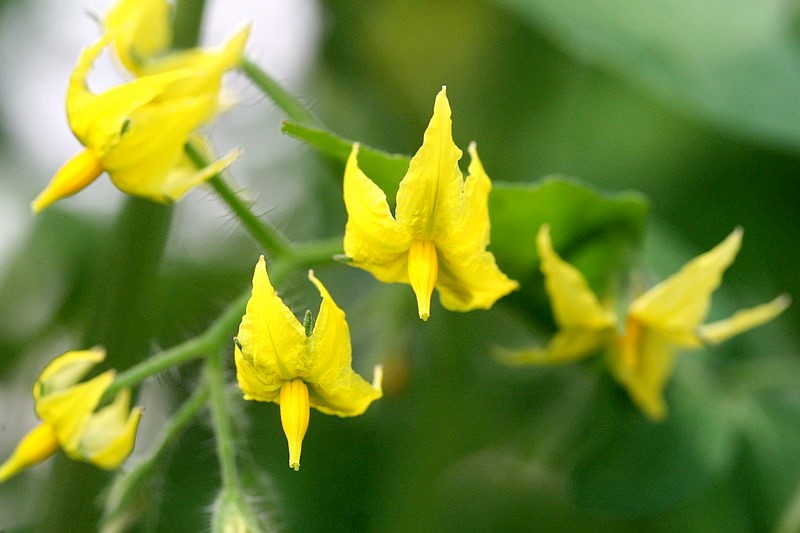 Extracting pollen from poricidal structures is not easy, but some bees know a way to do it.

A bee lands on one of these flowers, bites an anther and curls her body around it. She then lets out bursts of fast contractions and relaxations of her thoracic muscles – those muscles used for flying, but here the wings remain still. The contractions produce cyclical deformations of her thorax that last from fractions of a second to a few seconds: think of a body builder flexing his pectoral muscles really, really fast. These movements generate vibrations that are transmitted to the anther, causing pollen grains to fall though the apical pores and land on the bee’s body, adhering to it with the aid of electrostatic forces. 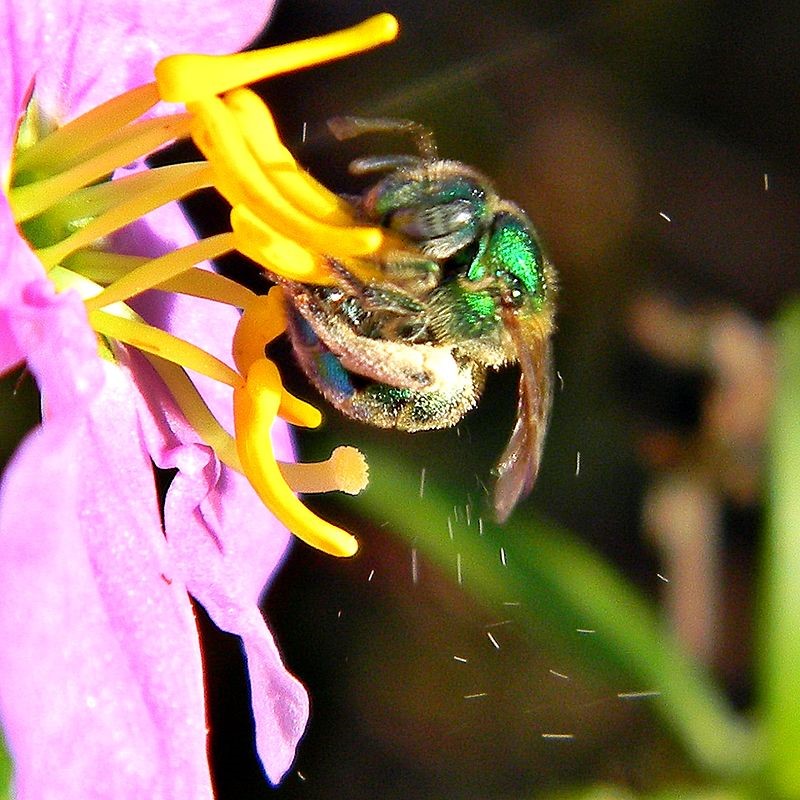 This head-banging pollen-harvesting manoeuvre generates a high-pitched buzz, hence it is known as ‘buzz pollination’; or as ‘sonication’ in technical reports. A physicist or an engineer could point out that this mechanism is not strictly sonication because it’s not sound that agitates and extracts pollen, rather the bee’s vibrations on the flower. But ‘sonication’ is the term commonly adopted, so we will keep it. Bumble bees (Bombus spp.), carpenter bees (Xylocopa spp.), and some other bees can buzz pollinate: honey bees (Apis spp.) and most leafcutter bees (Megachile spp.) cannot. And apparently only females know the trick; males have never been recorded buzz pollinating. Watch the whole sequence of events here (buzz pollination from 0:49) and here.

Plants with poricidal floral morphology are distributed across at least 80 angiosperm families, which suggests that buzz pollination has evolved independently many times. This has probably been helped by bees’ readiness to buzz for other reasons such as warning enemies, compacting nest materials, or cooling/warming their nests by beating their wings.

“Buzz-pollination syndrome”, the name given for this plant-bee association, is not just a biological curiosity. It makes a huge difference for crops such as tomatoes, raspberries, cranberries, blueberries, aubergines, kiwis and chili peppers. These plants don’t necessarily need buzz pollination to reproduce, but they produce more and better fruit if they are buzzed because more pollen is transferred and more ovules are fertilised.

In the late 1980s, Belgian and Dutch companies developed techniques to rear at a large scale the buff-tailed bumble bee, the ultimate buzz pollinator. Local producers of greenhouse tomatoes began replacing costly mechanical pollinators with boxes containing bumble bee hives, and a global, multi-million pound industry was born. Today, all ordinary tomatoes bought in a European supermarket have matured with the help of commercially reared bumble bees (they also transmit diseases to wild bees, but that’s a story for another time). 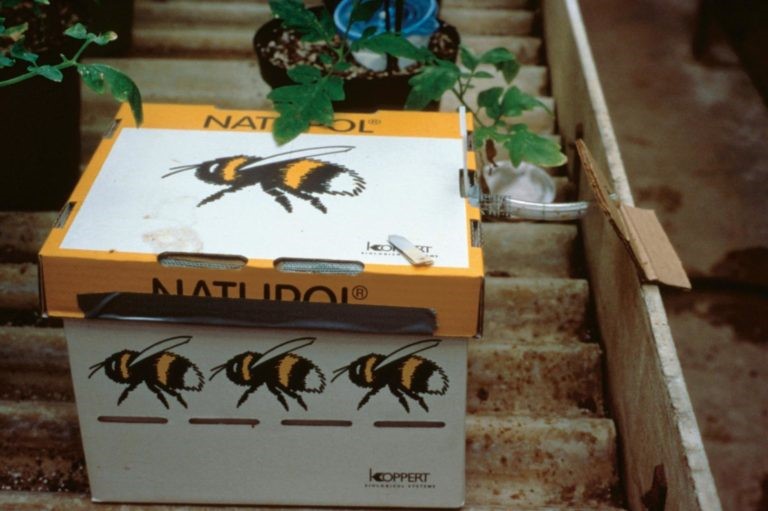 We may see pollination as a harmonious relationship where plant and insect go out of their way to help each other, but this is mistakenly romantic. A bee aims to take all the flower’s pollen: pollination happens because a few grains are dropped or rubbed off by accident. And a plant produces as little nectar and pollen as necessary to entice a flower visit. So the association between pollinators and flowers is best described as a mutual exploitation.

Buzz pollination fits nicely into this scenario. Poricidal anthers prevent excessive pollen expenditure by rewarding only a few specialist pollen gatherers, which increases the chance of pollination. Plants with poricidal structures typically secrete little or no nectar but their pollen is rich in protein, which convinces a bee to go to the trouble of buzzing to gain a small dose of the yellow stuff. It’s a clever and efficient trade agreement in the pollinators’ world.