Audrey’s brood—the only brood in the pond—is now about 3½ weeks old, and they should start flying at about six or seven weeks. It’s hard to believe, because now they’re just in their scruffy teenage phase with tiny wings, and are only now starting to grow their adult feathers.

I actually have enough photos and videos for two duck reports, so I’ll put up another in about a week. But then they’ll have grown even more, and will have most of their feathers! I’m celebrating Father’s Day today with a nice dinner and wine, as I consider myself a DuckFather.

Of course Audrey, though she’s a Killer Duck, is the DuckMother, and if she could curb her homicidal instincts I’d put her up there with Honey as Duck Mother of the decade. But Honey never killed anyone.  Yet when you see Audrey attentively protecting a pile of babies on the pond edge (yes, there are still twelve), it’s hard to see her as a killer. In the end, it’s one thing to say, “She’s just being a duck; that’s her nature,” but not all ducks are that aggressive.

Anyway, let’s have some cuteness on Father’s Day. Here they are near the top of the ducking ramp. (This is about a week and a half ago.) 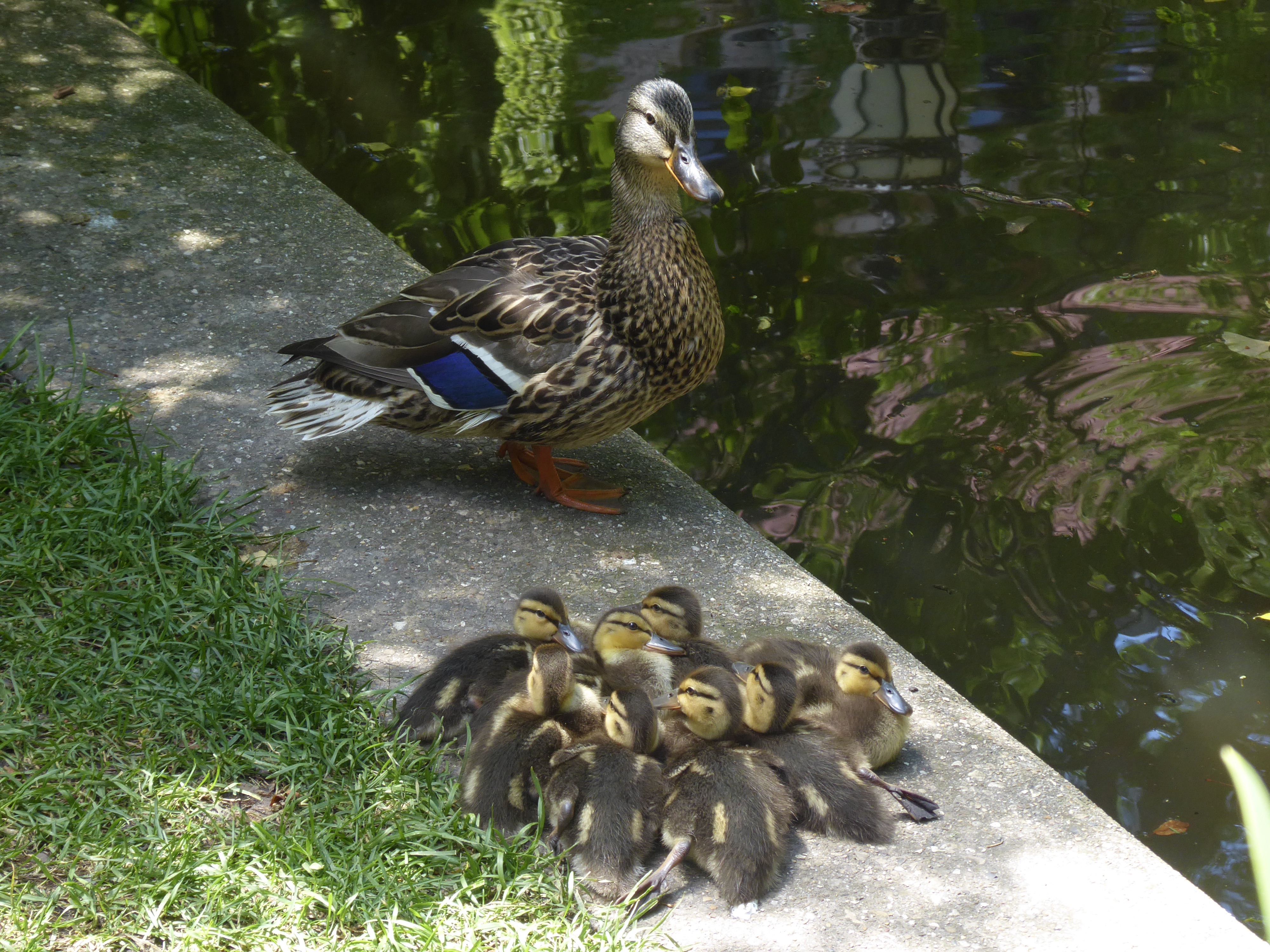 The ramp was a good idea, and I take credit for it, but the credit for the design, construction, and installation must go to Facilities. Audrey’s brood learned to use it the very first day they entered the pond! They are a smart brood, and also aggressive, for even when they were very small, individual ducklings would chase full-grown mallards. I think that part of Audrey’s aggression is heritable.

Here’s a video by Jean Greenberg—all these videos are hers—showing them climbing the ramp towards Mom. They then form a pile.  This happens nearly every day after at least one meal.

Would you like to see another picture of my kids? Sometimes there are two piles, but never more than that. 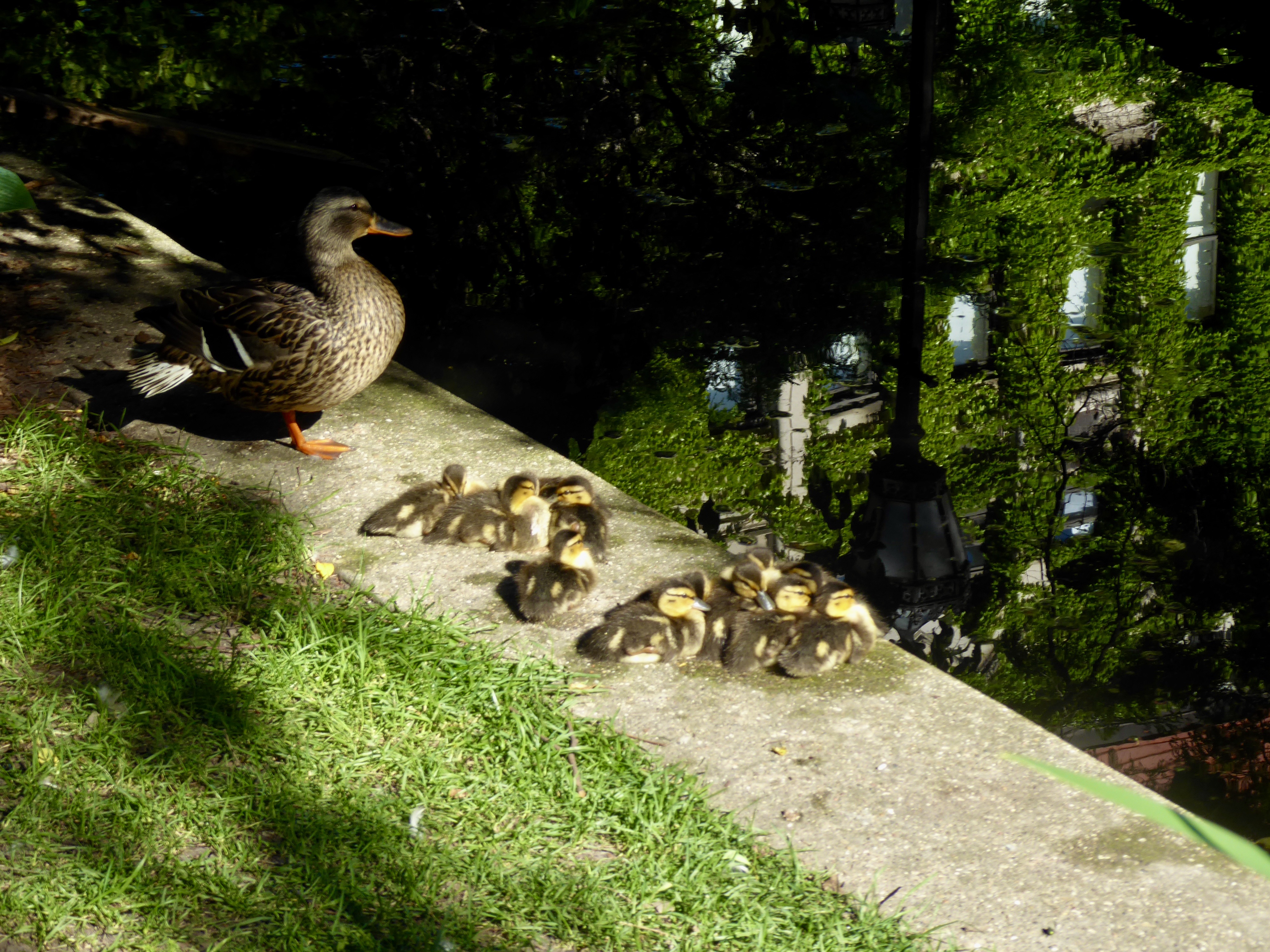 Look at this video. At 18 seconds in, the duckling at upper left flaps its tiny wings. They look like penguins when they do that! 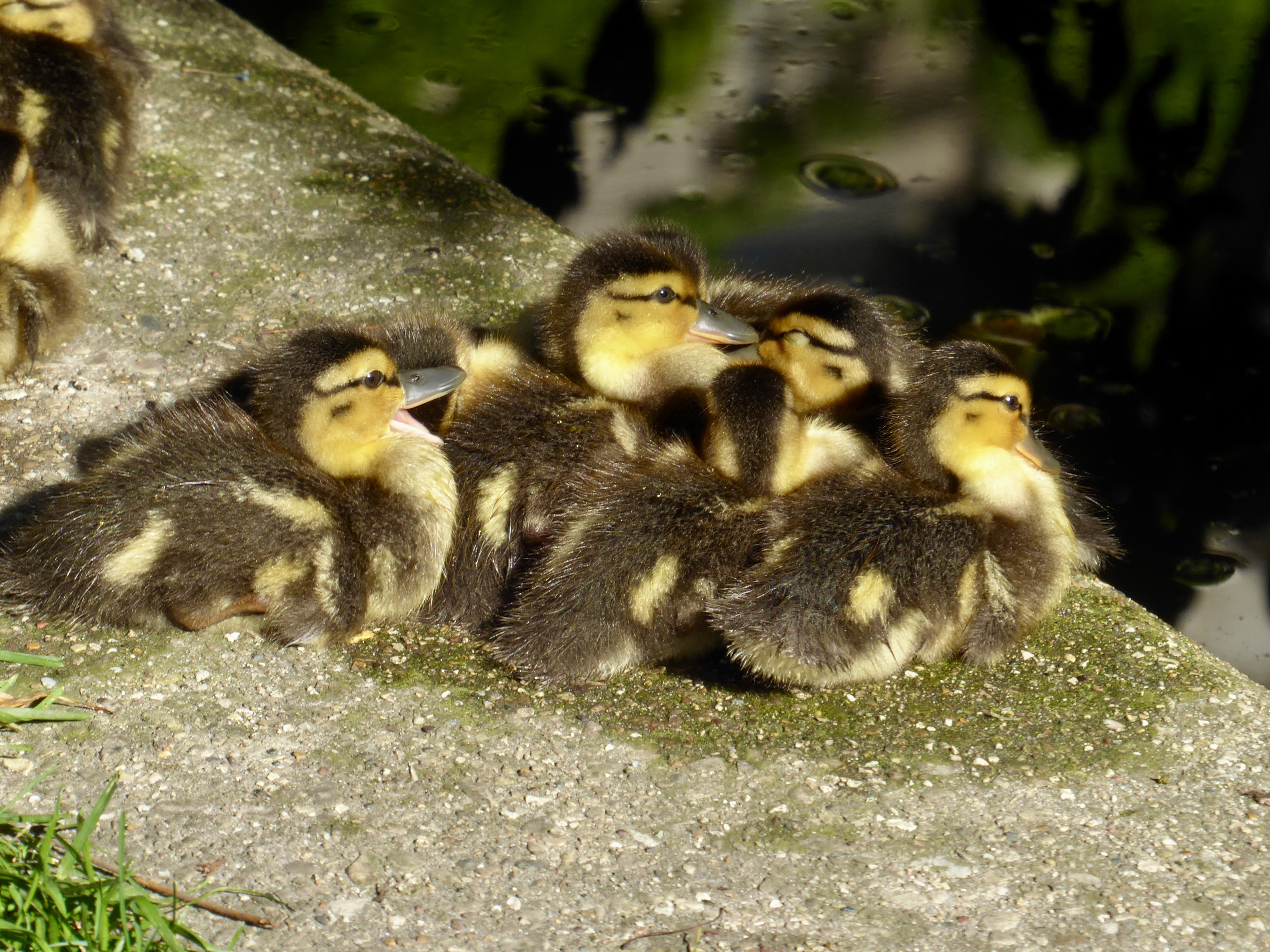 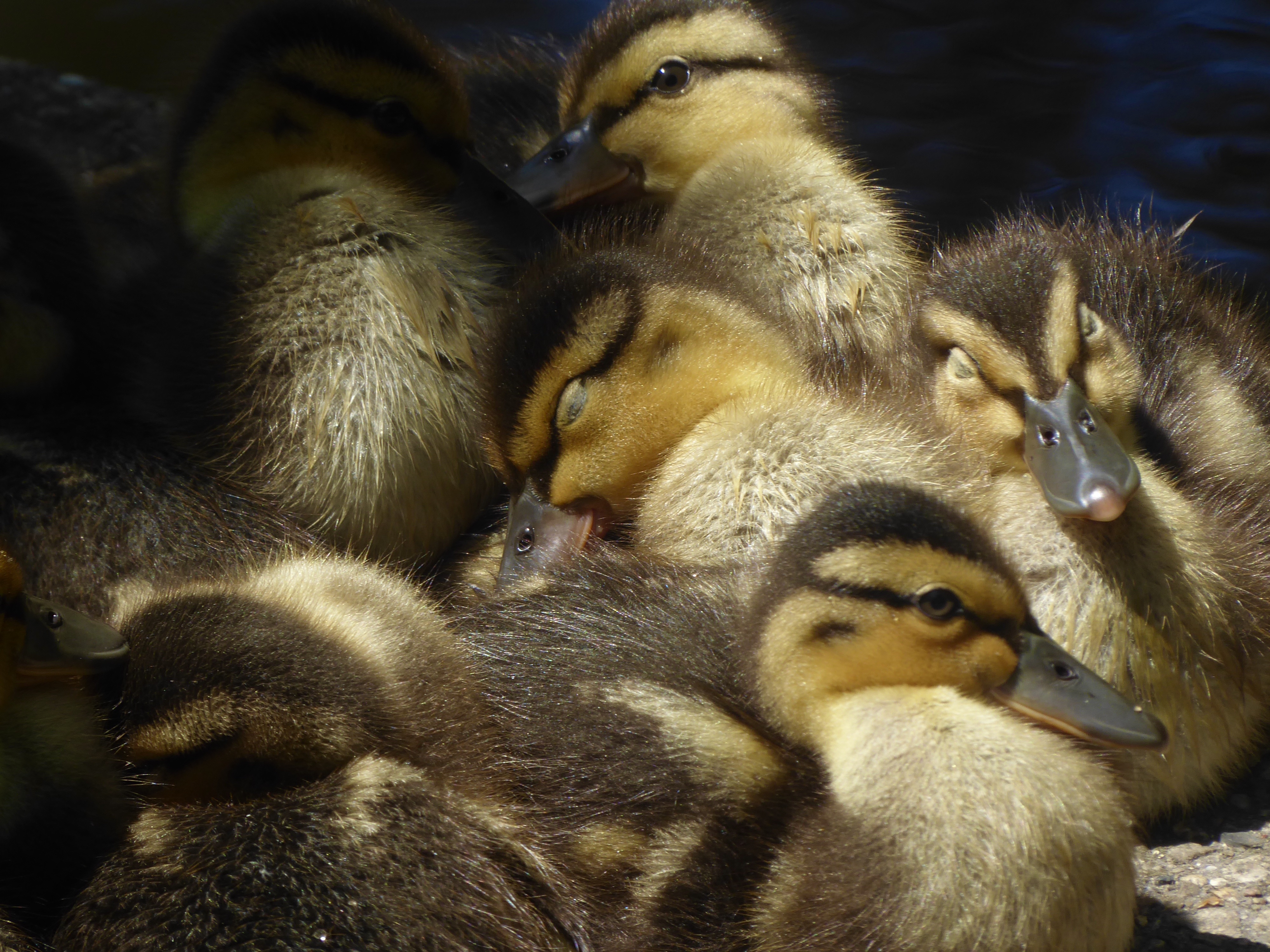 They’ve already learned to forage on the land. Listen for quacks, the ducklings’ cheeps, and Audrey’s cluck of contentment.

The bridge between the main pond and the channel is a psychological barrier for young ducks. Here they start to cross it, but then turn back. Beyond lies the wide world, and they shouldn’t leave yet!

And two piles of ducklings: 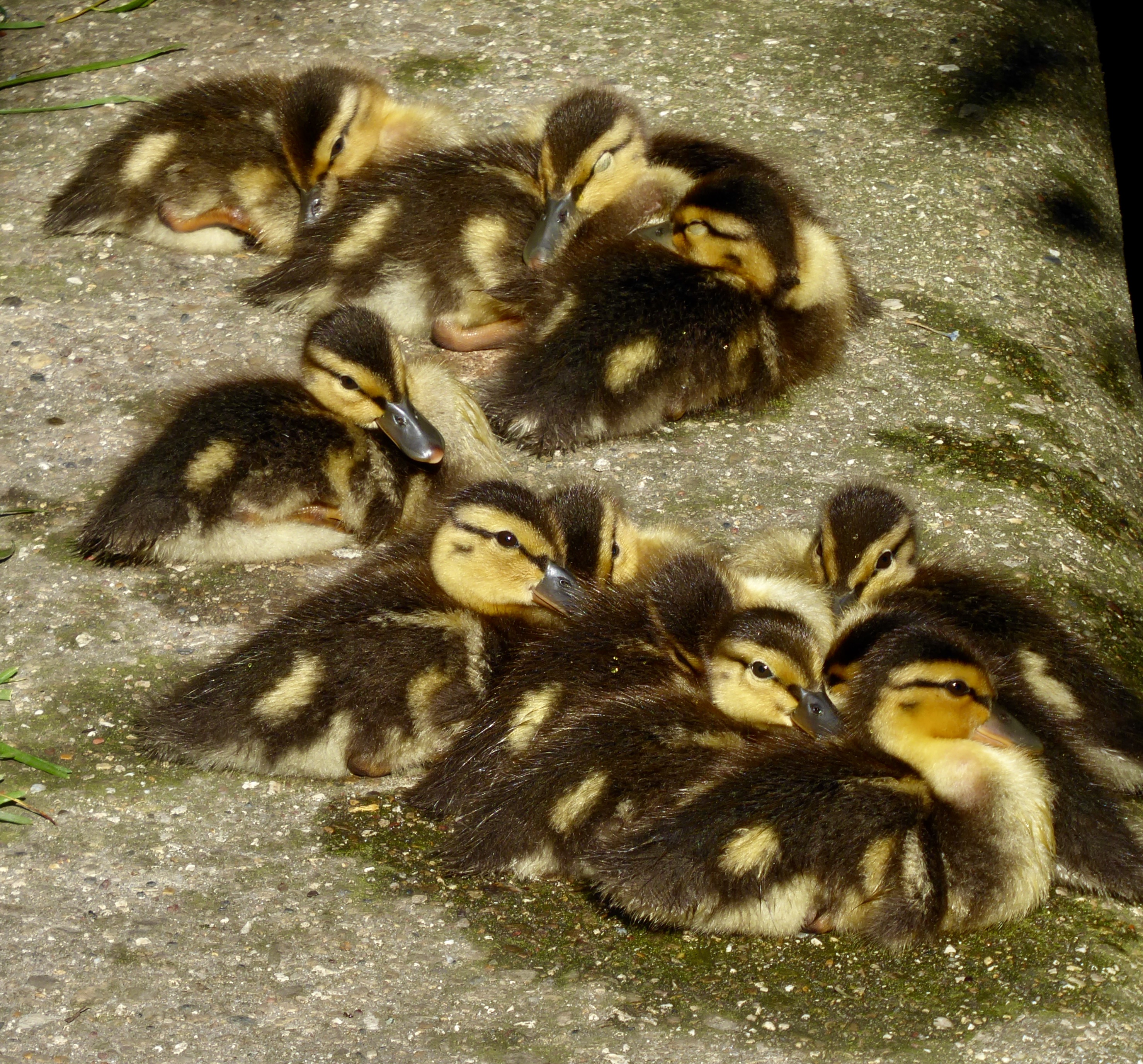 Finally, sometimes they sleep on the boulders and we have Ducklings on the Rocks.  That sounds to me like a good name for a drink, and I invite readers to suggest a recipe for a libation of that name. 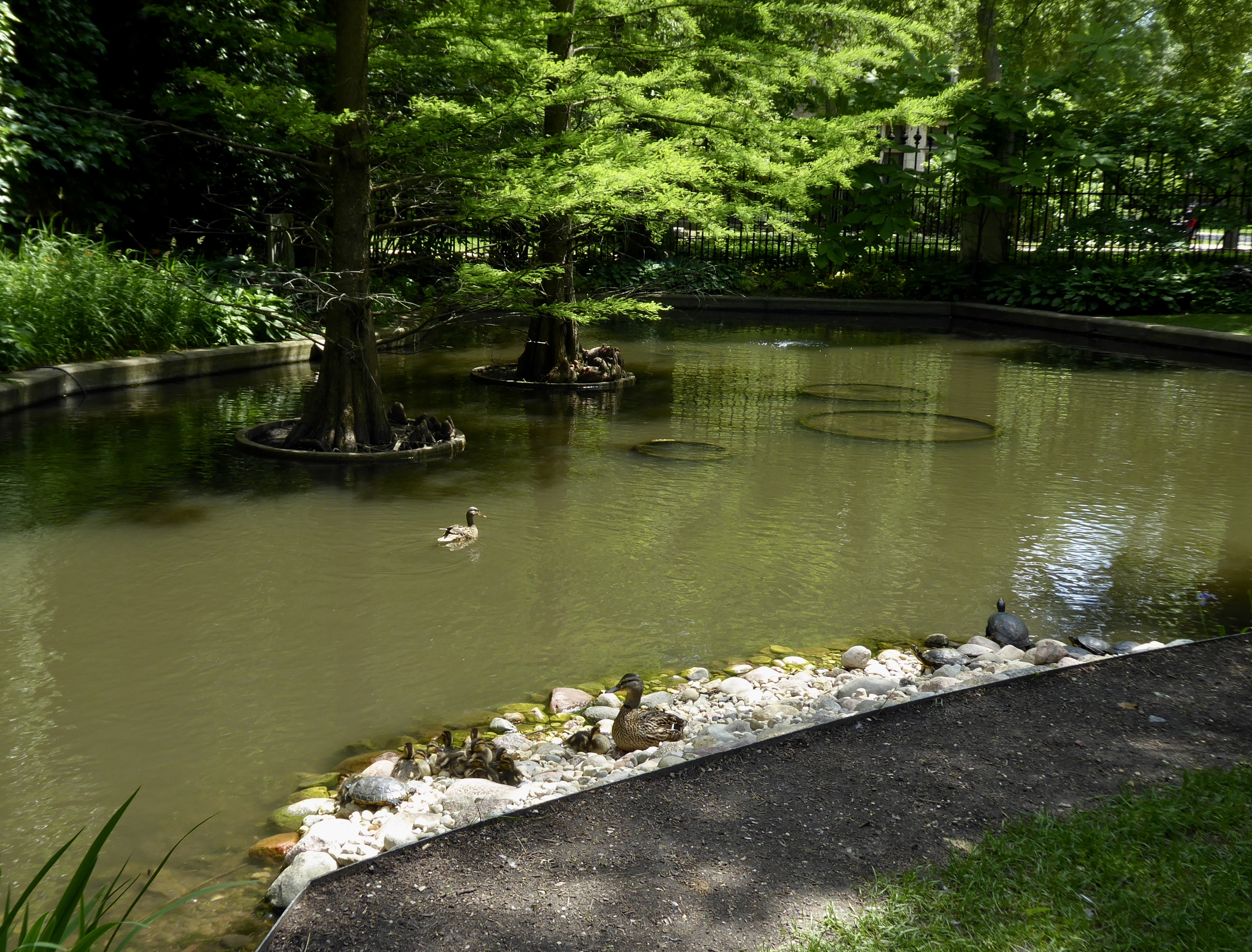